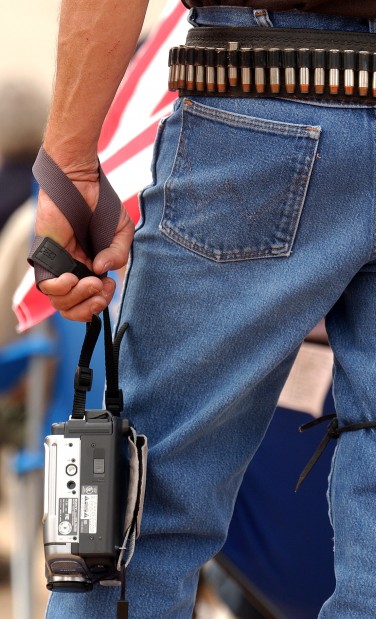 The Minuteman movement peaked around 2006 when this event took place near Three Points, but a hard core of border-militia members remain committed to the cause. 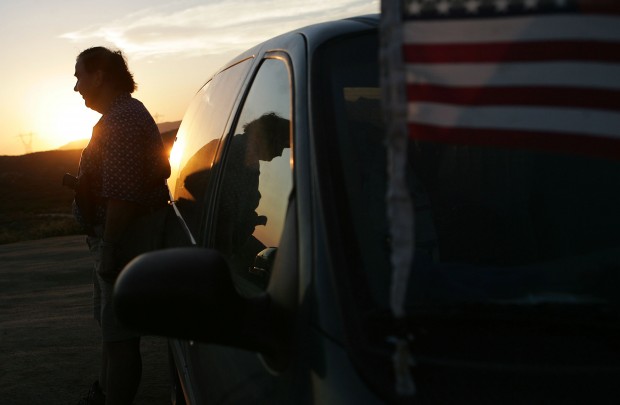 Chechstan Hebek, a Minuteman, was patrolling the U.S.-Mexico border west of San Diego by himself, reporting things he saw to the proper agency on this Friday in July six years ago. The photo was taken west of Campo, near Boulevard, Calif.

Lawmakers killed a bill that would have created a state-sanctioned border militia, but that didn't squelch the Minuteman impulse in Arizona.

Neither did the movement's ties to border-militia leader and neo-Nazi J.T. Ready, who killed four people and apparently killed himself May 2 in Gilbert.

People in the cause remain committed to patrolling spots near the Arizona-Mexico border to stop what they see as an invasion by smugglers or illegal immigrants, said participants, their supporters and their critics. Some may be even more motivated now that their plan for state organization was ended by a legislative maneuver.

"There is a large military veteran population in our state who would go down there and do the work that the state needs done under the state flag," said Michael Frye of Spring Valley, Ariz., who supported SB 1083, which would have created the Arizona Special Missions Unit. Now, he said, "There's really no other choice but for those folks like myself to form citizen militias."

A longtime Arizona border-militia leader, Jack Foote, worked for a period with the group that wrote the bill and said its demise is motivating sympathizers of the border-militia movement.

"We have now washed our hands of our state's Legislature," Foote, of Cottonwood, said via email. "Now we are going to do things our own way."

The bill would have set up a 300-member volunteer force to patrol the border at the governor's request. The group would have been armed but also vetted in an effort to weed out the violent extremists who have been attracted to the Minuteman movement.

But critics of that movement, such as Mark Pitcavage of the Anti-Defamation League, said the border-militia idea is extremist in its nature, not just at its outer edges.

Tim Foley says he's motivated to patrol the border by the signs of a drug-cartel invasion that he sees in the mountains and desert outside Sasabe, Ariz.

Foley, who lives most of the time in the Phoenix area, began going to the border in 2010, when he read an online call to arms by a group calling itself the Arizona Citizens Militia. Unbeknownst to him, that group was led by Foote, who founded the Ranch Rescue group in 2000, setting the stage for the later Minuteman movement.

Foley quickly soured on Foote but got hooked on patrolling the border and now goes for regular, multi-day patrols. As many border-militia members have, Foley split away and formed his own group, which he calls Arizona Border Recon.

"We do reconnaissance. We'll sit on the mountain and if we see something, we'll make a call," he said.

Foley himself was the target of an urgent search last year after a Border Patrol agent in Sasabe reported that Foley had said he planted improvised explosive devices on border trails outside Sasabe.

On April 1, 2011, two days after Foley allegedly made the comment, a team of officers led by the FBI searched the area for explosives and sent a bomb robot to his Sasabe home, Foley said.

The whole incident derived from Foley's effort to tell a story and see how it got around, he said.

"It was me trying to find out who was dirty Border Patrol," he said. "There are no IEDs, there are no bombs, there is no assassin."

Word of the search involving Foley emerged last summer after a Border Patrol report on the incident was leaked as part of a hacking targeting Arizona Department of Public Safety computers.

The FBI would not comment on the incident, and there are no court records on Foley related to the incident.

The effort to form a state-sanctioned volunteer militia began in 2007, when then-state Sen. Jack Harper introduced a bill to form a state Homeland Security Force, a volunteer group that could be used on the border or elsewhere, at the command of the governor. Then-Gov. Janet Napolitano vetoed the bill, calling it unnecessary because the governor already had legal authority to call up a militia.

In 2011, Harper and others introduced a new bill to establish an Arizona State Guard. That 3/4-page bill passed and was signed into law, but it was toothless - no money was provided to establish the guard.

Last year, state Sen. Sylvia Allen took the concept further, convening a team of people to write a bill and including a request for $1.9 million to fund the new volunteer militia. Luke Taylor, a retired Army lieutenant colonel, helped lead the group and thought he had come up with a winning concept - a new "Arizona Special Missions Unit."

"This legislative year we took a different approach whereby parts of 22 states' public laws relative to state guards were used to build our bill," he said in an email. "It was the best ever and the citizens approved it but the 'open borders and status quo crowds' did not in the final push."

State Sen. Steve Gallardo strenuously fought the bill, arguing, "All this does is, it legitimizes the Minutemen-type model of enforcement."

Among the opponents were Major Gen. Hugo Salazar, who heads the Arizona National Guard and worried that this group would be armed, and that he hadn't been consulted adequately.

Gov. Jan Brewer also let it be known that she didn't want the bill, and House Speaker Andy Tobin never set a floor vote on the bill, killing it.

Going against the trend

The death of the bill infuriated Foote.

"There is some serious outrage in our state about the way Tobin killed our bill, and that outrage is now being channeled into direct citizen action," Foote said via email last week. "People have begun organizing their own militia units all over Arizona."

Not all border-militia participants have faith in Foote's words. Foley, for example, says he joined Arizona Citizens Militia after Foote posted news of shootouts and invasions at the border that turned out to be bogus. But others, such as Frye and Al Roglin of Phoenix, say Foote retains a following despite earlier conflicts in the movement.

If the border-militia movement is regenerating, that goes against a trend documented earlier this year by the Southern Poverty Law Center, which tracks groups it considers right-wing extremist. The center reported that the number of border-militia groups had significantly declined, in part because members' passions were being channeled into state legislatures. Now, in Arizona, they've been stymied.

But the potential expansion of border-militia activity doesn't necessarily mean violence, members and others said. Ready's rampage - in which he killed his girlfriend, her daughter, the daughter's boyfriend and their baby - was "a domestic violence tragedy" unrelated to his political and border activities, said James Turgal, the FBI special agent in charge who oversees Arizona.

The FBI was investigating Ready at the time he died. For years he participated in heavily armed border patrols, and most recently he led a group called U.S. Border Guard, made up in part of members of the National Socialist Movement, a neo-Nazi group.

Weeding out people like Ready is key to involvement with civilian border patrols, said Pat King, a rancher in the area between Three Points and Sasabe.

She has accepted help from Minuteman-movement members for years, she said. In earlier years, members went out on patrols, but more recently, they have primarily used game cameras to uncover and report illegal activity on the ranch.

"You have to be very careful of who joins your ranks, that you don't trash the whole organization," King said. "Some people can join and have their own agendas. That gets kind of frightening."

The Minuteman movement peaked around 2006 when this event took place near Three Points, but a hard core of border-militia members remain committed to the cause.

Chechstan Hebek, a Minuteman, was patrolling the U.S.-Mexico border west of San Diego by himself, reporting things he saw to the proper agency on this Friday in July six years ago. The photo was taken west of Campo, near Boulevard, Calif.