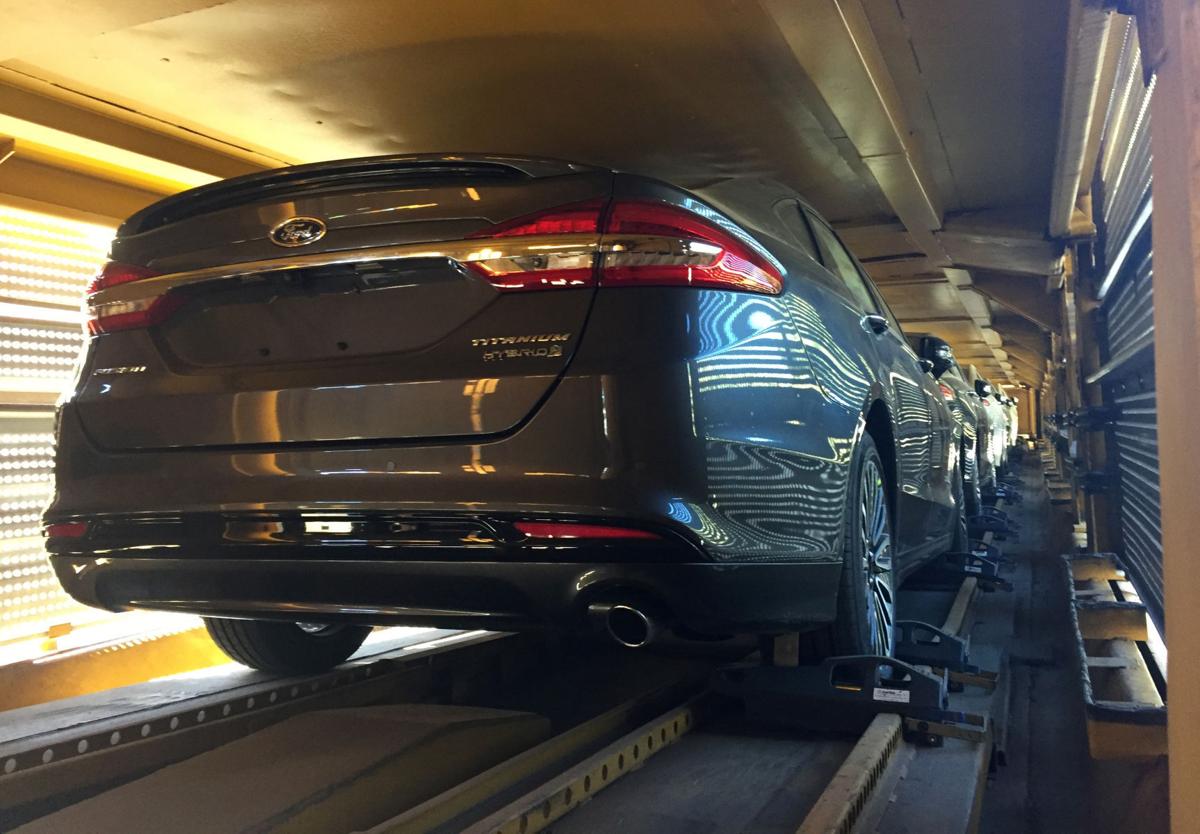 Ford Fusions are made in Hermosillo, Sonora. This shipment arrived by rail at the border crossing in Nogales. 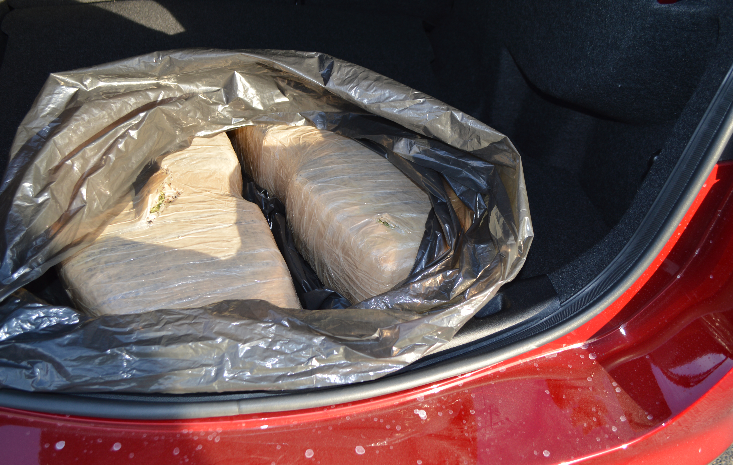 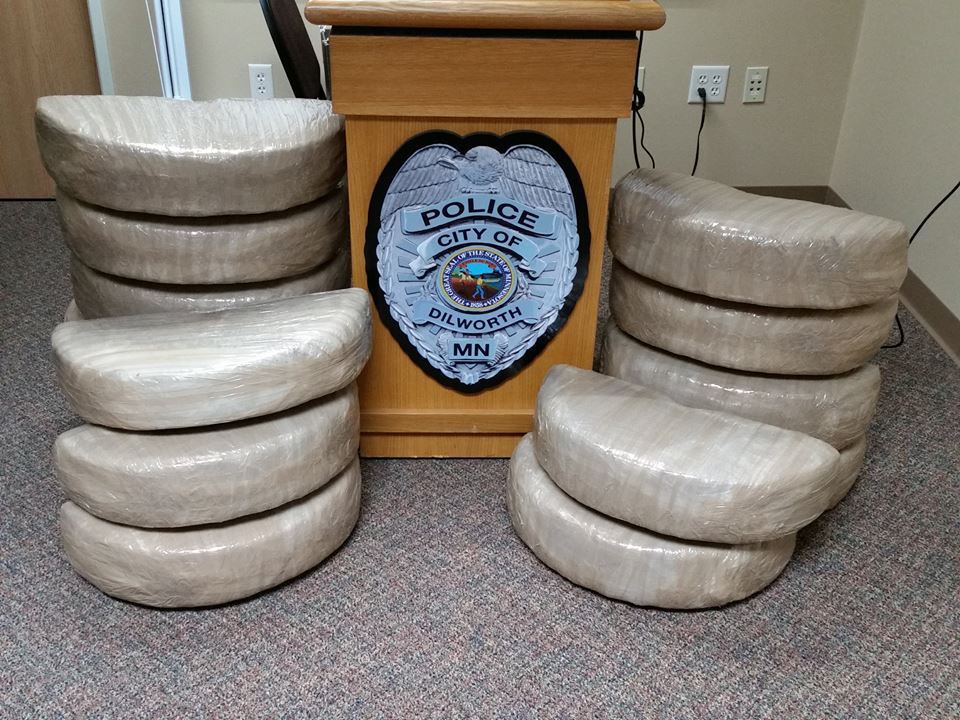 Packages of marijuana were found inside Ford Fusions shipped by train from Mexico.

A truck driver in a St. Paul, Minnesota, rail yard made a startling discovery while inspecting two new Ford Fusions shipped from Mexico: bundles of marijuana stashed in the cars’ trunks.

Each car had two 20-pound blocks of marijuana molded into the shape of spare tires and tucked inside plastic wrap, aluminum foil, coffee grounds and garbage bags, according to a Feb. 10 incident report from the St. Paul Police Department.

The discovery was followed by another find by BNSF Railway police: the train car containing the Fusions had arrived five days earlier and 13 of the 15 Fusions were sent to car dealerships, the report stated.

A rental car agency bought three of the Fusions and sent them to a nearby airport to be rented, spurring a quick phone call to airport police. All 13 cars were tracked down, although some were as far away as 170 miles from St. Paul, and marijuana was found in each of them.

In one case, a 50-pound package of marijuana was found in a car purchased by an 86-year-old man in Rochester, about 80 miles from St. Paul, according to a report from Minnesota news outlet AlphaNews.

No arrests were made, and St. Paul police do not have any suspects, said department spokesman Steve Linders.

In a separate incident on March 10, BNSF police notified the police department in Dilworth, Minnesota, that marijuana was found in a Ford Fusion from Mexico.

Police searched more than 400 other vehicles in the Dilworth rail yard and found 217 pounds of marijuana packaged and sealed to look like spare tires in seven new Fusions from Mexico, said Dilworth Police Chief Ty Sharpe.

St. Paul police hadn’t seen an incident of marijuana smuggled inside cars on a train in at least two decades, Linders said.

The same can’t be said for the Arizona-Sonora border. In May 2015, the Mexican military found 430 pounds of marijuana in the spare-tire spaces of 14 new cars inside a rail car in Nogales, Sonora, according to Mexican media reports. The packages were wrapped in aluminum foil and clear plastic. The next month, 35 pounds of marijuana were found stashed among Ford vehicles in the same rail yard.

A spokeswoman for Ford said the company is aware of the situation and cooperating with the investigation, but declined to provide any more information.

Fusions are made at the Ford plant in Hermosillo, Sonora, and some are shipped by rail to the border crossing in Nogales, where U.S. Customs and Border Protection statistics show 782 trains crossed the border in fiscal year 2016.

Union Pacific Railroad owns the rail line that goes through Nogales, but other companies can use it, said spokesman Justin Jacobs.

Union Pacific has a “robust inspection process” at the border to stop contraband, including X-ray examination, Jacobs said. However, if the seals on rail cars are not broken, then the company has an obligation to get the cargo to its destination.

Jacobs said marijuana has been found on Union Pacific trains, but he did not know how often or what other types of drugs have been found.

CBP did not respond to inquiries from the Star about how trains are inspected at the border, but federal court records from a 2009 dispute between CBP and Union Pacific Railroad shed some light on the process.

At the time, CBP policy stated all trains entering the United States through Nogales were X-rayed at the border. If contraband was suspected to be on board, a trained dog sniffed for drugs or people and the train was referred for further inspection at the rail yard in Rio Rico.

The dispute between Union Pacific and the U.S. government revolved around whether the company should be held responsible for marijuana found in boxcars, court records show.

Among the incidents covered in the court case, officers found 500 pounds of marijuana behind wallpaper covering a hole near a boxcar’s side beams; 330 pounds in a plywood compartment built into the undercarriage of a boxcar; 115 pounds in a boxcar’s center beam, and 90 pounds buried under a load of cement in a boxcar.

On Jan. 24, Border Patrol agents in El Centro, California, found 46 people in the boxcars of a train who were trying to enter the country illegally.

In perhaps the largest seizure of marijuana hidden in a cross-border train, Border Patrol agents in Eagle Pass, Texas, found 22,000 pounds of marijuana in six railroad cars destined for Chicago in 2010.

Border agents in Nogales not fooled by woman's heroin booty

While apprehensions and marijuana seizures are down, chief says there's still work to be done.

Traffickers will use any means to smuggle heroin and other drugs into the United States.

At this kindergarten in Agua Prieta, Sonora, the students learn English and prepare for a bilingual life in two countries. Read the Arizona Da…

The total seizure was in two separate incidents.

Ford Fusions are made in Hermosillo, Sonora. This shipment arrived by rail at the border crossing in Nogales.

Packages of marijuana were found inside Ford Fusions shipped by train from Mexico.