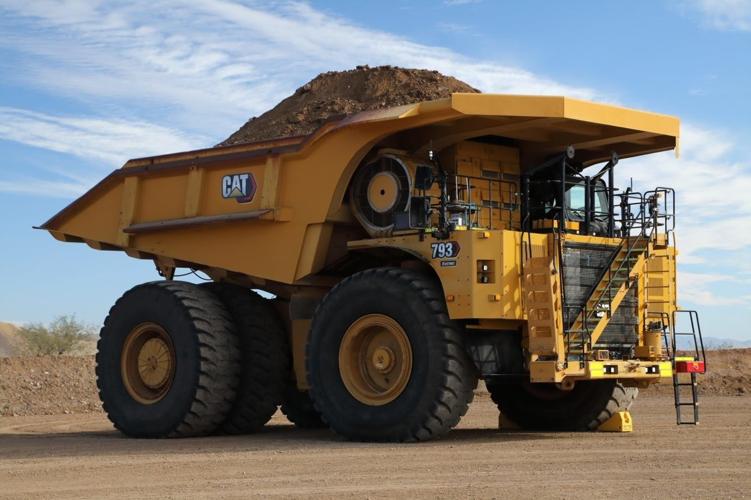 Caterpillar's Tucson Proving Ground, located in Green Valley, is being transformed into a sustainable testing and validation hub.

Caterpillar Inc. has successfully demonstrated its first battery electric large mining truck and announced a significant investment to transform its Tucson Proving Ground into a sustainable testing and validation hub.

Caterpillar staff and representatives of key mining customers recently witnessed a live demonstration of Caterpillar’s prototype battery truck on a 4.3-mile course at its Tucson Proving Ground, which is in Green Valley.

The truck also performed a one-kilometer run on a 10% downhill grade, capturing the energy and regenerating it to the battery while maintaining enough charge for additional complete cycles, the company said.

The program, launched in 2021, focuses on accelerating the development and validation of Caterpillar’s battery electric trucks at participating customers’ sites.

“This demonstration is a significant milestone, and we are excited for these trucks to get to work at customers’ sites around the world in the near future,” Caterpillar Resource Industries Group President Denise Johnson said in a news release.

The prototype truck was built at Caterpillar’s Tucson Proving Ground, where Caterpillar announced it is investing to transform the proving ground into a working, sustainable “mine site of the future” by installing and using a variety of renewable energy sources.

The Green Valley site, which also includes the Tinaja Hills Demonstration & Learning Center, will also use a variety of renewable power sources, including wind, solar and hydrogen, capable of powering the facility and its products as they become electrified, the company said.

Caterpillar, which opened a major mining technology center on the west side of downtown Tucson in 2019, also plans to install equipment to make hydrogen to test fuel-cell trucks.

Customers of Tucson Electric Power can take advantage of enhanced and new energy-saving rebate programs over the next two years.

Taco shop and cannabis dispensary headed to Tucson's north side

The $200 million facility is expected to be operational in 2025, creating about 65 jobs.

Southwest Gas Corp. customers in Tucson and across Arizona face a smaller rate increase after regulators and consumer advocates objected.

Hiring in bars, restaurants on the rise in Arizona

For Star subscribers: Even with inflation price increases, more people are going out to eat — and restaurants and bars are having to hire more workers.

Battery-making startup could employ up to 1,000 workers in Tucson

For Star subscribers: Pima County is mulling a lease-purchase deal with a Utah-based company expected to pump $3 billion into the Tucson economy over 10 years.

The new nonstop flights are expected to provide warm refuge from the cold for Canadians and a shot in the arm for Tucson tourism.

Two founders of self-driving truck startup TuSimple, which has major operations in Tucson, are back at the company’s reins after a power struggle.

Caterpillar's Tucson Proving Ground, located in Green Valley, is being transformed into a sustainable testing and validation hub.