Southwest Gas Corp. customers in Tucson and across Arizona are facing the prospect of a smaller rate increase after the company lowered its request in response to objections from regulators and consumer advocates.

The gas company, which serves 1.1 million customers in 10 Arizona counties including Pima and Maricopa, filed for a $90.7 million annual revenue increase with the Arizona Corporation Commission last December.

That request — which came a scant year after Southwest Gas’ last rate increase of 9.7% went into effect — would boost the average monthly residential bill over the entire year by an estimated $5.12, or about 11.6%, to $49.40, while raising the average home bill during winter months by $7.68, or about 12.6%.

But after months of filed testimony and formal hearings in September, Southwest Gas agreed to cut its revenue request by nearly a third, to $61.7 million.

That would result in an average monthly home bill increase of $3.38, or 7.6%, for typical gas usage, while boosting commercial rates as well, said Matt Derr, vice president of regulation for Las Vegas-based Southwest Gas.

At the same time, Derr noted, more customers will qualify for the company’s low-income discount rate and that discount will be extended year-round.

The average small-business customer would see a monthly bill increase of $7.36 month, or about 13.7%, the company said.

The matter is now in the hands of a Corporation Commission administrative law judge who heard the case and is expected to issue a rate recommendation to the full commission by mid-December.

Southwest Gas says it needs more revenue to recover about $711 million in system investments the company has made or planned since 2019 to ensure safe and reliable service in Arizona.

The company says that over the past five years it has added 61,000 Arizona customers, with expenses increasing about 9%.

In January, the company added about 5,300 customers in Graham County with the state-approved acquisition of the gas cooperative serving the county.

System investments the company cites since 2019 include the addition of a liquid natural gas storage facility in southeast Tucson, replacement of customer-owned yard lines and modernized customer-service and data systems.

Southwest Gas slimmed down its revenue request after the commission’s Utilities Division staff, the Residential Utility Consumer Office and other intervenors in the case objected to the levels of various expenses the company had sought to recover through rates.

Derr said the company compromised with regulators on its “cost of capital,” a measure of the cost of borrowing or issuing shares to raise capital involving the company’s structure of debt to stock equity and weighted average cost of both, including shareholders’ return on equity or profit.

Southwest Gas has agreed to 50% equity structure and a return on equity of 9.3%, down from the 9.9% it originally sought, Derr said.

The company agreed to drop a request to recover just over $2 million in unpaid late fees from when service shutoffs were suspended during the height of the COVID-19 pandemic in 2020 and 2021, after RUCO, a state agency representing ratepayers in rate cases, noted that no other utilities had sought such recovery.

RUCO, along with one of Southwest Gas’ biggest commercial customers and dozens of consumers who filed public comments in the case, say the utility is seeking higher rates too soon after its last rate increase went into effect in January 2021.

And a recurring issue in the rate case is Southwest Gas’ request to recover $162.8 million in costs for infrastructure put into service in the 12 months after a “test year” used to calculate new rates, in this case the year ending Aug. 31, 2022.

But RUCO has called the request excessive and has proposed limiting the qualifying in-service period to six months after the test year.

During the last rate case, the Corporation Commission cut that period for post test-year plant cost recovery to six months, from the 11 months the company had proposed.

RUCO also says Southwest Gas’ latest request represents an “explosion” in such costs, noting that its requests for post test-year plant jumped from $40 million in its 2016 rate case to $241 million in its last case, though the commission cut that to an estimated $115 million.

“The company continues to invest in and seek recovery of extraordinary amounts of plant,” RUCO Chief Counsel Daniel Pozefsky wrote in his closing brief to the ACC, adding that Southwest Gas has benefited from other favorable regulatory treatment.

“The ratepayers have been through a worldwide pandemic, record inflation and other financial hardships,” Pozefsky said. “(The requested) rate increase, back-to-back with the company’s last rate increase, is simply too much.”

RUCO has asked the commission to cut the gas company’s requested revenue increase to $55 million.

But Southwest Gas’ Derr said the company normally files for new rates every two to three years, and the last rate case was delayed because of the pandemic.

The steep increase in the company’s requests for post test-year plant cost recovery is partly due to a change in the way Southwest Gas adjusted for certain plant additions after 2016, Derr said, but they are intended to reduce “regulatory lag” consistent with previous commission decisions.

“It’s more just how we were looking at that adjustment,” he said. “I appreciate RUCO always working with us and looking out for customers, but I think on this one, it’s just one of those areas where we just have a respectful disagreement.”

Southwest Gas also got pushback on its requests to recover costs for several employee compensation programs and dues it pays to an industry group.

The commission staff recommended approval of only 50% of expenses proposed for a management incentive plan costing $5.4 million and about $532,000 for directors’ and officers’ insurance, as well as its American Gas Association dues, reasoning those costs should be split 50-50 between shareholders and ratepayers as both stand to benefit.

But the staff recommended denial of the entire requests for expenses for several other programs, including $1.9 million for a stock-based compensation plan, as well as for supplemental executive retirement plans.

Derr said the employee programs are essential to recruit and retain qualified management, noting that Southwest Gas offers compensation “at the median of market.”

The gas company is proposing to expand its Low Income Ratepayer Assistance program by extending the 30% discount to apply year-round, instead of from November through April now, and to increase the income eligibility threshold to 250% of the Federal Poverty Level, from 200% currently.

The eligibility threshold is based on household size and under current guidelines apply to single-person households with total gross income of $27,180, or $55,500 for a household of four, for example.

The commission staff has recommended approval of the changes, which were applauded by Wildfire, a Phoenix-based nonprofit focused on ending poverty.

Southwest Gas agreed to drop its request to recover an “acquisition premium” of about $1 million for its $3.5 million buyout of Graham County Utilities’ gas system in January 2021.

The commission staff recommended granting the company about $907,000 in operating and maintenance expenses for repairs to the Graham County system, disallowing a later request for about $10,000 in additional costs.

Southwest Gas also is proposing a new program called “Move2Zero,” allowing residential and business customers to voluntarily sign up to buy blocks of carbon offset credits through the utility to offset their greenhouse-gas emissions.

The company would buy certified carbon credits — generated by projects that remove carbon from the atmosphere such as reforestation and renewable-energy projects — and offer them to customers in blocks that would cost $5 per month and offset 10 therms of fossil-gas usage per month.

The commission staff has recommended approval of the program, but an environmental group has opposed it.

The Southwest Energy Efficiency Project (SWEEP) says it has concerns about the accuracy of greenhouse-gas emissions reductions claimed through carbon offsets and the cost to customers, suggesting the money would be better spent on energy-efficiency improvements or electrification.

As a formal intervenor in the case, SWEEP has proposed that the commission end the subsidies developers get to extend gas lines to new homes and businesses, which it said average about $1,000 per home and about $1,800 per business.

The nonprofit group argues that the economics of gas have changed and gas is on the way out due to cost and environmental and health concerns. SWEEP also proposed limiting a program to replace customer-owned yard lines to qualified low-income customers.

Derr said the construction allowance subsidies are common among utilities nationwide and ending them would be “devastating to the state.”

“To get rid of those construction allowances would be very detrimental, especially in the rural parts of the state,” he said.

Roche Diagnostics will consolidated instrument manufacturing in a new 60,000-square-foot building on West Tangerine Road, about 18 miles north of Tucson.

IBM's latest advance in high-level data storage shows Tucson is still an important center of innovation after more than 40 years.

Tucson-area companies including IBM, Sylvan Source, Marcus Engineering and Paragon Space were awardees at the Governor's Celebration of Innovation.

The $200 million facility is expected to be operational in 2025, creating about 65 jobs.

Customers of Tucson Electric Power can take advantage of enhanced and new energy-saving rebate programs over the next two years. 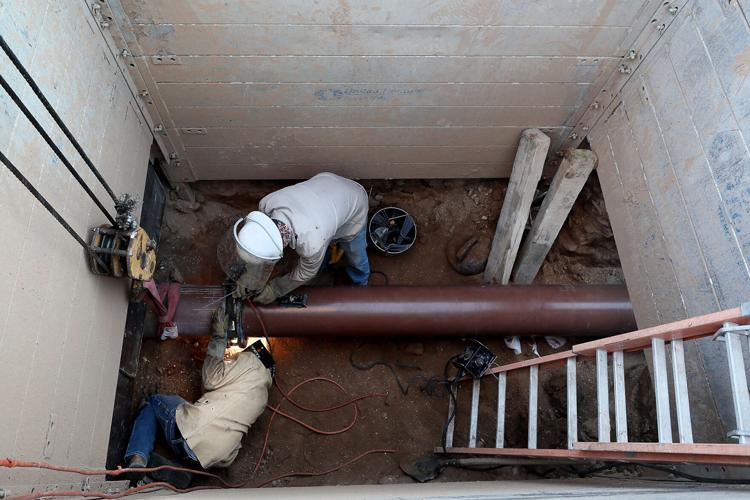 Welders work on a Southwest Gas steel transmission line along Houghton Road north of East Fort Lowell Road on Wednesday. A request by Southwest Gas to raise gas rates after an increase in 2021 has drawn significant opposition from consumer and environmental groups, prompting the company to pare its request for new revenues. 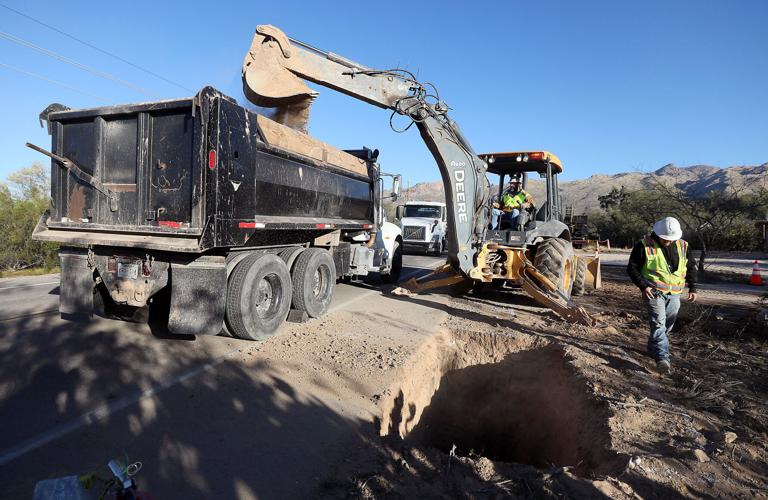 Southwest Gas Corp. customers in Tucson and across Arizona face a smaller rate increase after regulators and consumer advocates objected.