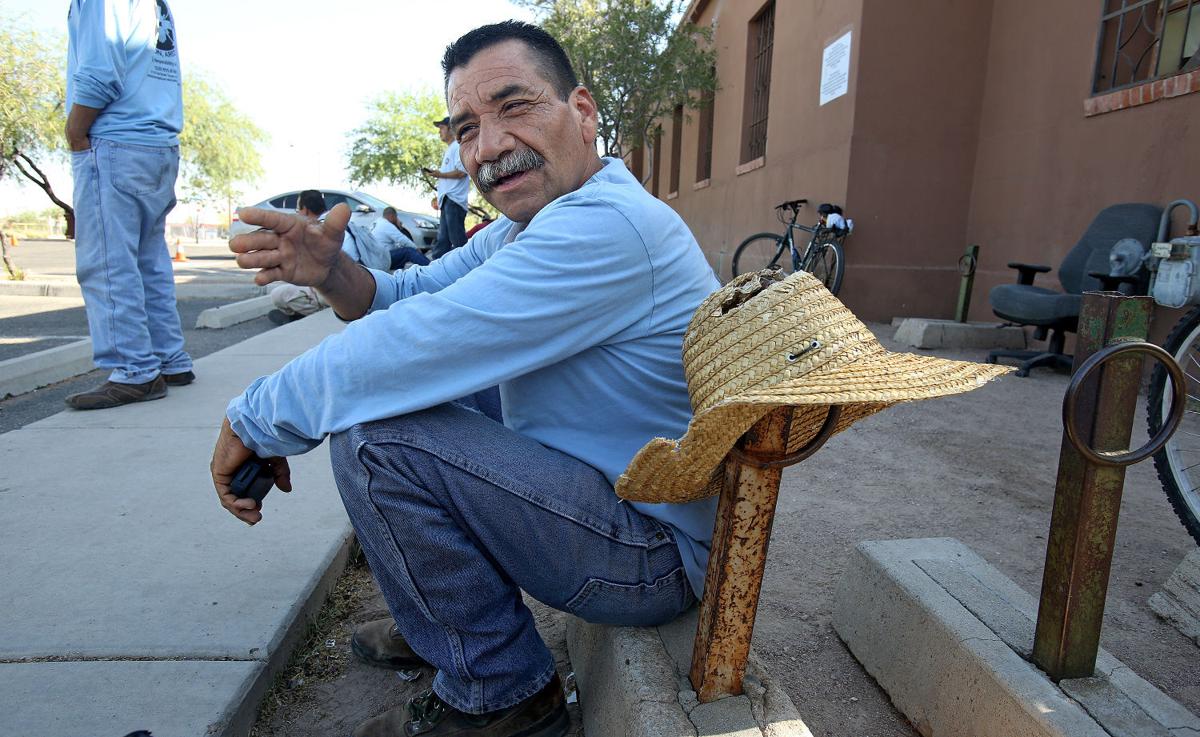 Laborer Armando Maldonaldo, 54, finds work through the Southside Worker Center in Tucson. Maldonaldo was once stopped by a Tucson police officer, and used the card the work center issued him as identification. 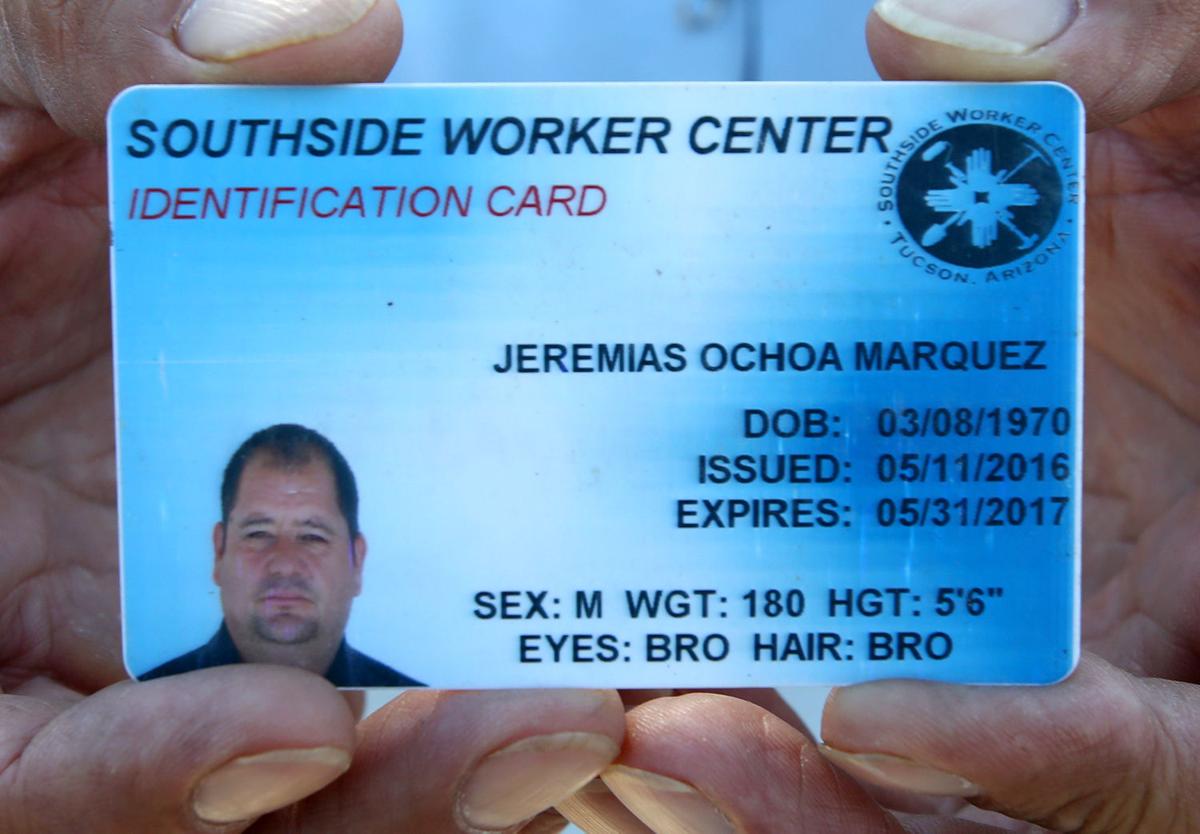 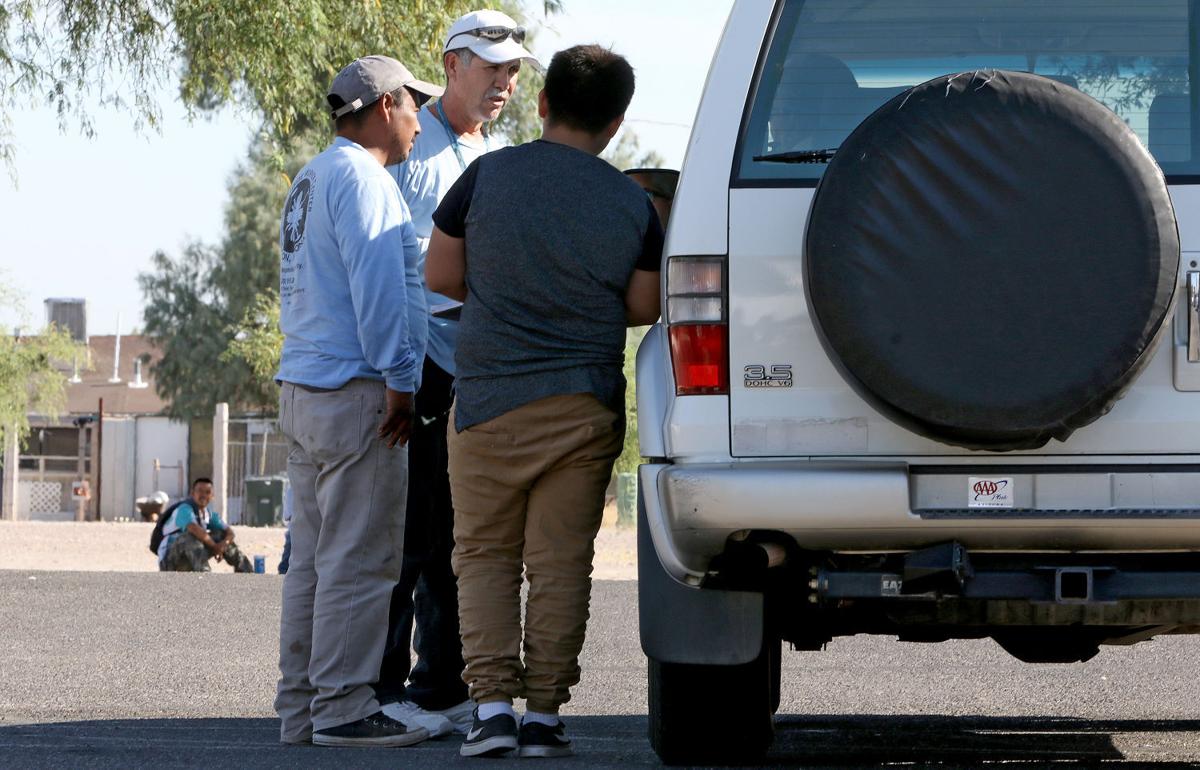 Eleazar Castellanos, center, of the Southside Worker Center, said many undocumented immigrants are wary of reporting crime because they lack government-issued identification. 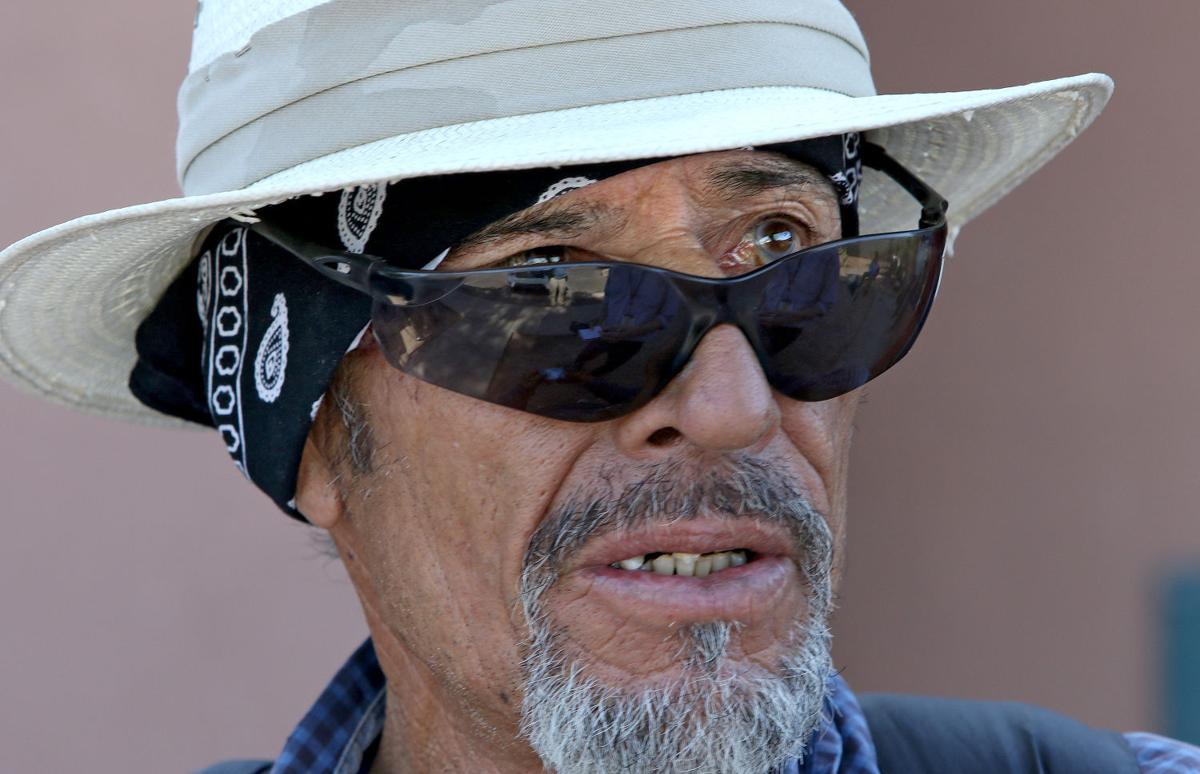 Roofer and carpenter Teodoro Martinez, 43, from Sinaloa, Mexico, uses the services of the Southside Worker Center.

By Alex Devoid For the Arizona Daily Star

He and many other day laborers say they avoid reporting crime because they don’t have government-issued identification, which could make police officers suspect they lack immigration papers and prompt a call to the Border Patrol under Arizona’s immigration law, SB 1070, said the center’s coordinator, Eleazar Castellanos.

Cruz Robles said a municipal ID that doesn’t require him to prove his immigration status would go a long way toward easing his mind when it comes to calling the police.

A coalition of grass-roots organizers, including those at the Southside Worker Center and the Primavera Foundation of Tucson, want to do just that with the Todo Tucson ID campaign. They say a Tucson municipal ID would make the city safer and help undocumented immigrants, the homeless and other vulnerable groups.

“Our idea is to at least get something with which we can say, ‘This is who I am and this is my name,’” said campaign spokeswoman Belem Chagolla.

But the campaign faces stiff resistance from opponents of undocumented immigration, such as Republican state Sen. John Kavanagh of Fountain Hills.

“Illegal immigrants shouldn’t be here,” Kavanagh said. “That’s why we call them illegal immigrants. And anything that facilitates their staying here is contrary to U.S. immigration law.”

The Southside Worker Center issues photo IDs to day labors for a $5 fee. Several members, including Cruz Robles, have presented the IDs to police without raising suspicion about their immigration status.

But they say its success depends on the officer, and a city ID would be another step in the right direction.

Even with a Tucson city ID, undocumented immigrants could still be arrested under SB 1070, said Tucson Police Chief Chris Magnus, who was the chief of police in Richmond when that city adopted a municipal ID.

However, a city ID could help police officers determine who they are talking to.

Todo Tucson ID organizers are modeling their campaign on the One Phoenix ID campaign, which received a boost earlier this year when the Phoenix City Council voted to formally investigate adopting a municipal ID.

Legislation introduced by Kavanagh would have eroded these campaigns by banning cities from creating IDs with different standards than the Arizona Motor Vehicle Department. The bill failed, but Kavanagh said he plans to introduce it again.

One risk of using different standards cited by Kavanagh was the potential for identity theft.

But any identification card could be used for identify theft, not just municipal IDs, Magnus pointed out. And it’s usually “massive databases of personal information” that are stolen for identity theft, not individual ID cards, he said.

Identity theft should be addressed during the planning process, Magnus said. In Richmond, the city implemented municipal IDs in October 2014, after a lengthy research process.

Those IDs required proof of residency and a current government photo ID, including those issued by foreign governments. The city also required secondary identification, such as a school or work ID.

Human Relations Commission members pointed to the risk that the state government would use a database of municipal IDs to round up undocumented immigrants, but Tucson organizers said applicants wouldn’t need to include their immigration status.

In Richmond, many U.S. citizens used the municipal ID, Magnus said. As a result, applying for the ID didn’t necessarily flag the applicant as being undocumented.

“There’s actually a surprising broader swath of people who use the card,” Magnus said. “My guess is you’d see that here as well.”

Due to concerns over an immigration roundup, New York City authorized the destruction of personal information from city IDs, depending on the outcome of the 2016 presidential election.

Many day laborers in Richmond, both undocumented and not, couldn’t access bank services and carried cash with them, making them “walking ATMs” for robbers, Magnus said.

The municipal ID helped deal with that problem by doubling as a debit card with which they could safeguard their earnings.

“Of course, these identifications wouldn’t just help those of us who are undocumented,” Castellanos of the Southside Worker Center said.

The Todo Tucson ID would be available to any Tucson resident, including vulnerable groups like the homeless, those fleeing domestic violence and transgender people, organizers said.

The ID also could play a role in a “pathway out of poverty” by opening up access to services such as job resources at libraries, Alonzo Morado of the Primavera Foundation said.

People who frequently move due to inadequate housing or to escape domestic abuse often don’t have sufficient documentation for state-issued identification, Morado said, adding that the Todo Tucson ID could be a solution.

The benefits for the transgender community would be significant, too, said Karolina Lopez Barrera, a coordinator at the LGBTQ migrant-rights organization Mariposas Sin Fronteras, or Butterflies Without Borders.

As a transgender woman, she said she has faced discrimination and even physical abuse when presenting a government ID that doesn’t match her gender identity.

The Todo Tucson ID would let her choose her gender identity on the card.

Cost is also a concern for Kavanagh, since the state already issues IDs.

Tucson organizers are looking at grants and fees to fund the project. Nationally, city ID costs range from free to about $15.

In the meantime, the Todo Tucson ID campaign is looking at cities across the country to learn best practices and waiting to see what happens in Phoenix.

Alex Devoid is a journalism student at the University of Arizona and an apprentice at the Star. Email him at starapprentice@tucson.com

Grijalva bill would bring deported veterans back to U.S.

Congressman says deportations of those who served is "utterly appalling."

Eleazar Castellanos, program organizer for the Southside Workers Center at Southside Presbyterian Church in Tucson, talks about how a municipa…

More than a year after the key part of SB 1070 took effect, an Arizona Daily Star investigation reveals a patchwork of immigration-enforcement…

Four protestors were arrested in Phoenix.

Random sample of submitted signatures found many were not registered, did not live inside city limits.

SB 1070 politician threatens to sue over tuition rate for 'dreamers'

Says he's giving the attorney general 60 days to sue the Arizona Board of Regents or he'll go to court himself.

Laborer Armando Maldonaldo, 54, finds work through the Southside Worker Center in Tucson. Maldonaldo was once stopped by a Tucson police officer, and used the card the work center issued him as identification.

Eleazar Castellanos, center, of the Southside Worker Center, said many undocumented immigrants are wary of reporting crime because they lack government-issued identification.

Roofer and carpenter Teodoro Martinez, 43, from Sinaloa, Mexico, uses the services of the Southside Worker Center.