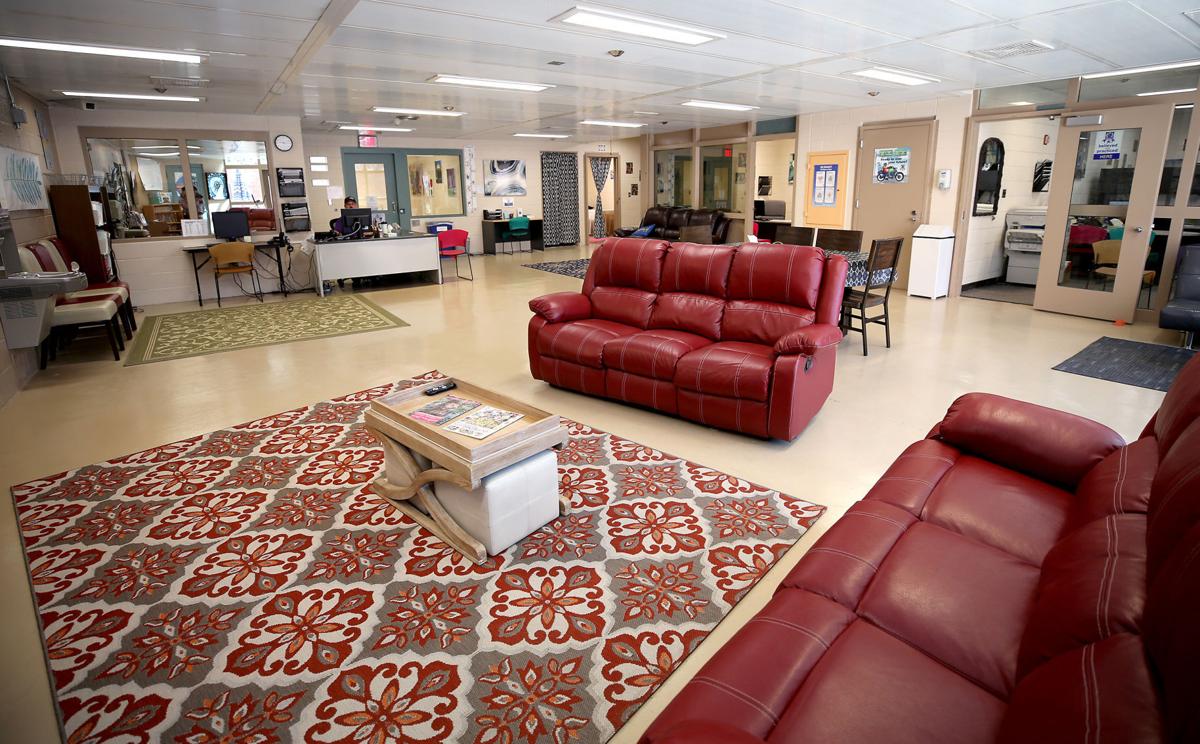 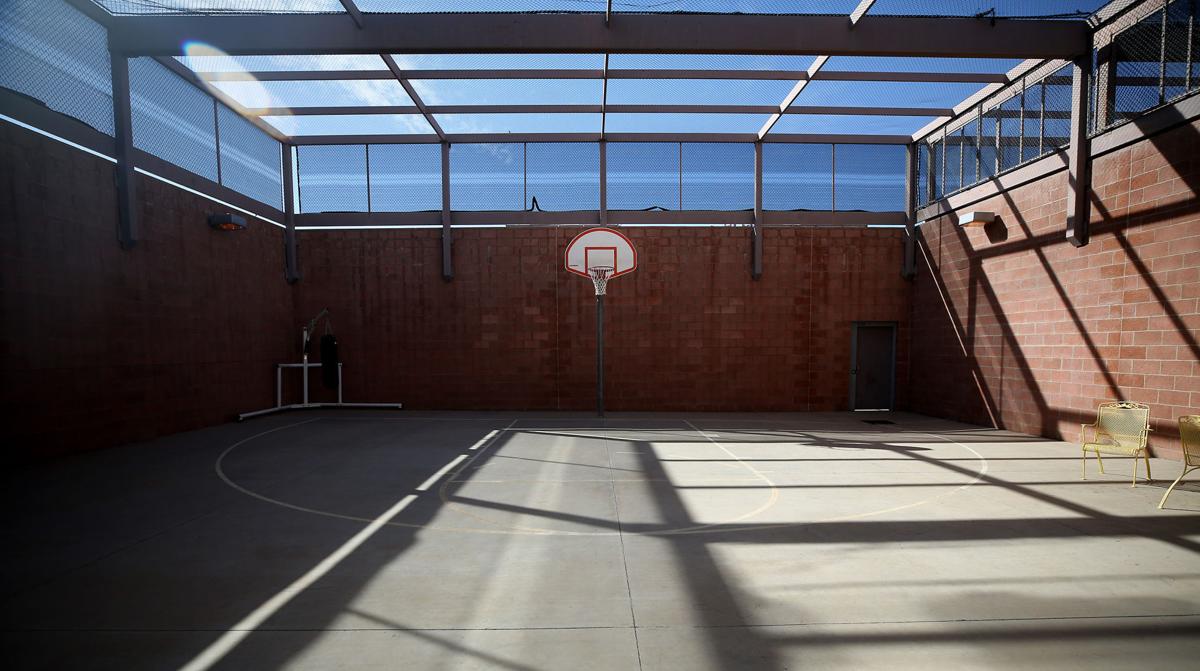 The center has its own basketball court. “Some kids come in and don’t want to talk, so we’ll say, ‘hey, why don’t you go outside and shoot some basketball?’ ” says Yrigolla. 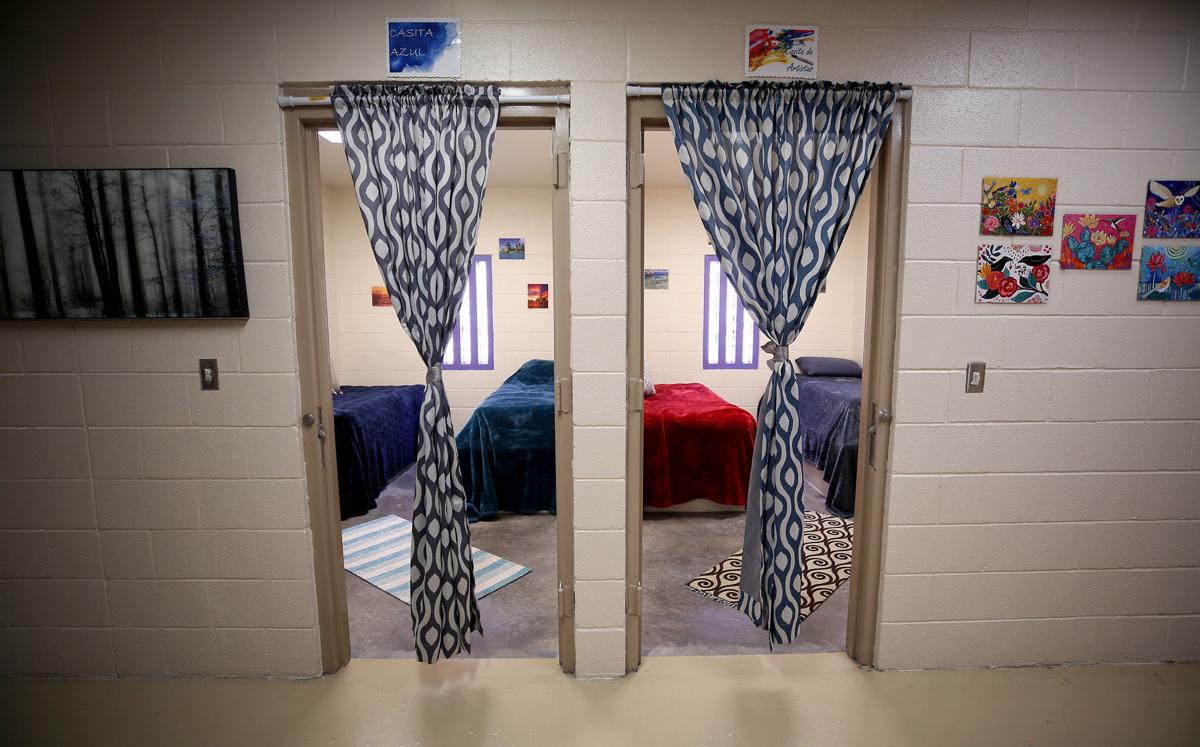 Every child is housed safely in his or her own room at the Alternative Community Engagement Services Center. 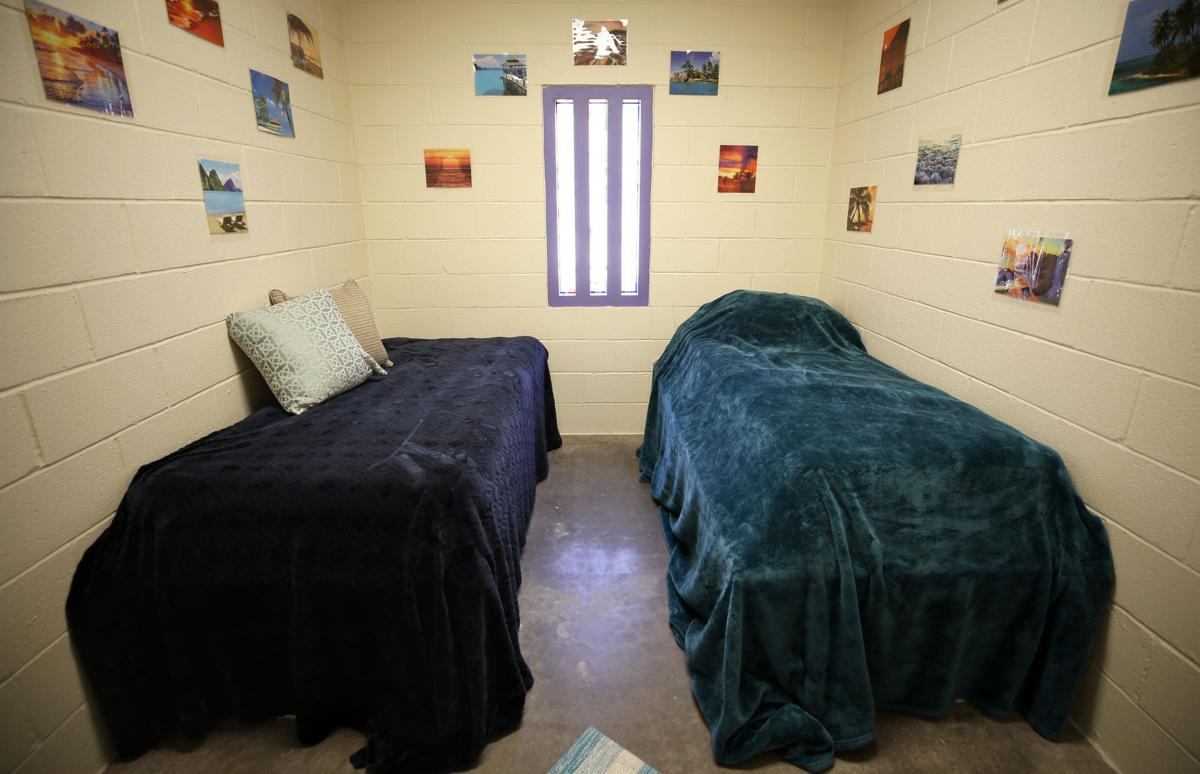 The ACES Center is located behind the Pima County Juvenile Court on Tucson’s south side.

Thanks to an innovative idea by the county’s juvenile court system, Tucson youths involved in misdemeanor or minor domestic violence-related cases have a safe place to cool down during high-stress times.

The Alternative Community Engagement Services Center, located behind the Pima County Juvenile Court on Tucson’s south side, welcomes children from ages 8 to 17, with colorful decorations and games of every kind.

Challenging the conventional look and feel of a detention center, ACES has swapped bars for curtains, and offers seclusion rather than confinement, in a design that’s meant to relax and engage, said ACES Lead Probation Officer Geri Yrigolla.

The building served as a girls’ pod for the juvenile detention center back in the 1990s, said Christopher Vogler, the division director of juvenile probation.

“Conditions of confinement have changed drastically,” he said, adding that he was a volunteer in 1997 who worked with detained youths. “At the time, we were sleeping two kids minimum to a room and the kids who were on good behavior slept on a mat in the gym. We deal with kids a lot more positively now.”

Now, at the ACES Center, a continuation of what Vogler called the “wildly successful” Domestic Violence Alternative Center, or DVAC, every kid is housed safely in his or her own room.

The DVAC program was conceived in 2007, when the juvenile court looked at their data to determine how kids got into jail. What they found was that there was a preponderance of youths being brought into the detention center for misdemeanor and domestic violence offenses.

“Most of the time they were being brought in for using bad language with their parents, yelling at people, slamming doors—things that aren’t really dangerous offenses,” Vogler said. “They would arrive at the door at intake, we’d call their parents and say ‘come pick your kid up at a certain time’ and we would have a really hard time overcoming the parents’ reluctance to pick the child up.”

It was at that point the DVAC Center was created, Vogler said.

In a short period of time, the juvenile court experienced an immediate decline in children coming to the detention center for misdemeanor and domestic violence offenses.

It took a few years to rally law enforcement to deliver kids to a separate location, but according to Vogler, once that caught on, it became much more effective at keeping the number of children in detention centers down.

“Sometime in 2015, we noted that our friends in Yuma County had taken that DVAC concept and added a little twist to it,” Vogler said.

Yuma County applied DVAC to an unused part of their detention center and added the ability for law enforcement to bring in kids without a delinquent referral.

“It was a huge shift in thinking,” Vogler said. “Essentially, they said there may be times where a law enforcement officer comes into contact with a kid and they may or may not be breaking the law, but it doesn’t necessarily require them to become involved in the juvenile justice system — maybe there’s some problem solving that needs to be done.”

The ACES Center technique of problem solving as opposed to punishment is just one of the ways the ACES Center attributes its success in decreasing the number of children involved in the juvenile justice system.

The facility, which recently celebrated its first anniversary, not only functions as a place to “cool off,” but also provides services such as safety planning, success planning, screenings to assess individual needs and up to 23 hours of respite services.

“When a child comes into the center, we don’t know the condition in which they’re coming to us,” Vogler explained. “So if we want to give the parent some kind of idea, we need to get an idea of what’s going on.”

The center utilizes a screener used to determine behavioral health and others to help direct families to the correct resources.

“We also do a strength assessment to see what the resiliency of the kids are,” Vogler added. “We’ve all been exposed to trauma, but kids who are exposed to traumatic events younger and more often, have a much greater propensity to be involved in juvenile justice.”

The ACES Center tries to package the information gathered during a child’s visit to give the parents a definitive list of resources, Vogler said.

Not only that, a child could walk into the ACES Center for a misdemeanor and leave with a success plan including career goals and how they might achieve them.

A number of kids have earned their GEDs through the center’s education program, according to Yrigolla.

“We really try to stay on top of what’s available to them,” she said. “And we also have lots of activities. Sometimes kids come in and don’t want to talk, so we’ll say, ‘hey, why don’t you go outside and shoot some basketball?’”

The ACES Center has other programming as well, including its own library, garden and culinary classes through JTED.

The center does not disregard misdemeanor offenses and refers kids for necessary services, such as substance abuse or anger management treatments.

“That’s why the first thing we want to do is calm them down,” Vogler said. “Then we can cross the bridge to ‘what happened’ and ‘who was at fault.’”

But crime has been continuously going down in the last 10 to 12 years by 50 percent, according to Vogler. There are currently less than 40 kids utilizing the ACES facility, whereas there were more than 300 in the 1990s.

The ACES Center hopes to continue in its mission to offer resources to children brought in for misdemeanor or domestic violence offenses, as well as their families.

“There is no child that walks through our door that we don’t think we can help,” Vogler said.

Jessica Blackburn is a University of Arizona journalism student who is an apprentice at the Star.

If it becomes law, would subject anyone convicted of felony animal cruelty to be listed on a public registry for a period of time.

For 25 years, this program has shown Tucson teens how the justice system works

The Courts Are Us program exposes teens to legal process, career paths.

Victim was named Woman of the Year in 2003 by the Marana Chamber of Commerce.

The monthly event offers evening hours for those who have obligations during normal court hours.

The center has its own basketball court. “Some kids come in and don’t want to talk, so we’ll say, ‘hey, why don’t you go outside and shoot some basketball?’ ” says Yrigolla.

Every child is housed safely in his or her own room at the Alternative Community Engagement Services Center.

The ACES Center is located behind the Pima County Juvenile Court on Tucson’s south side.