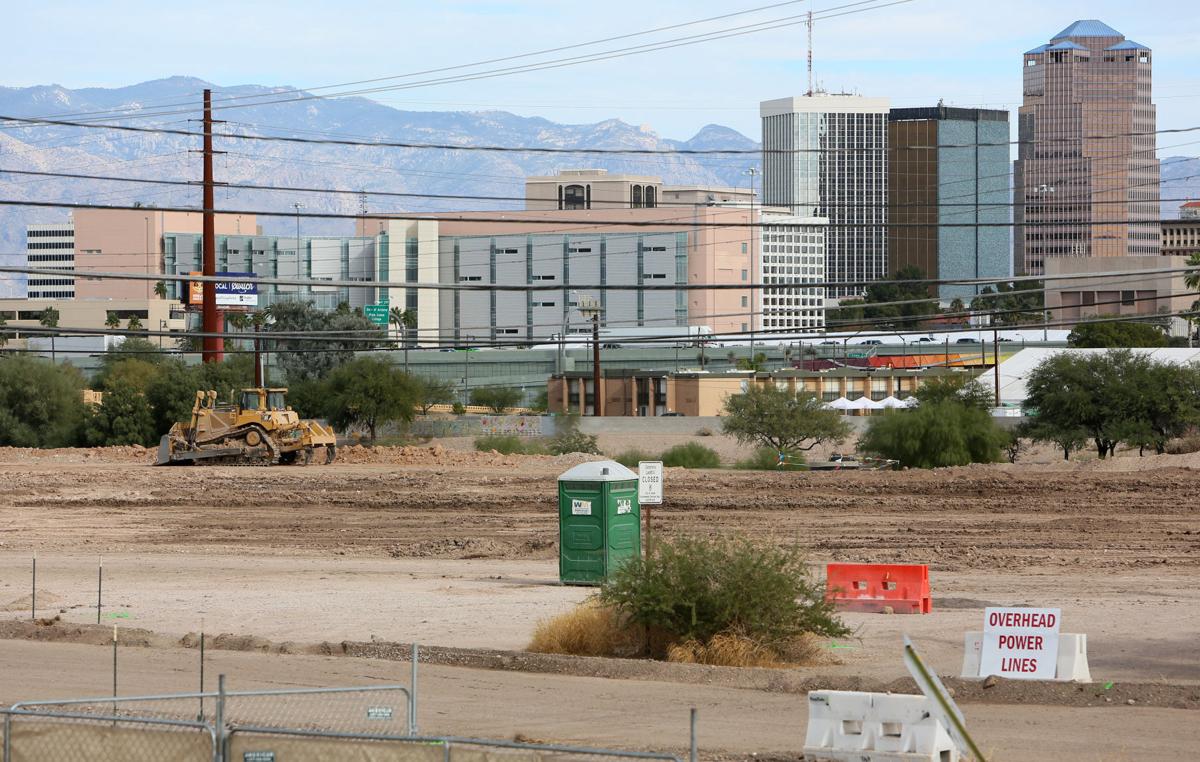 The city of Tucson stopped construction Monday after historic preservation activists complained that earth movers were grading by the site of the Convento, built by the Spanish in the 1770s. 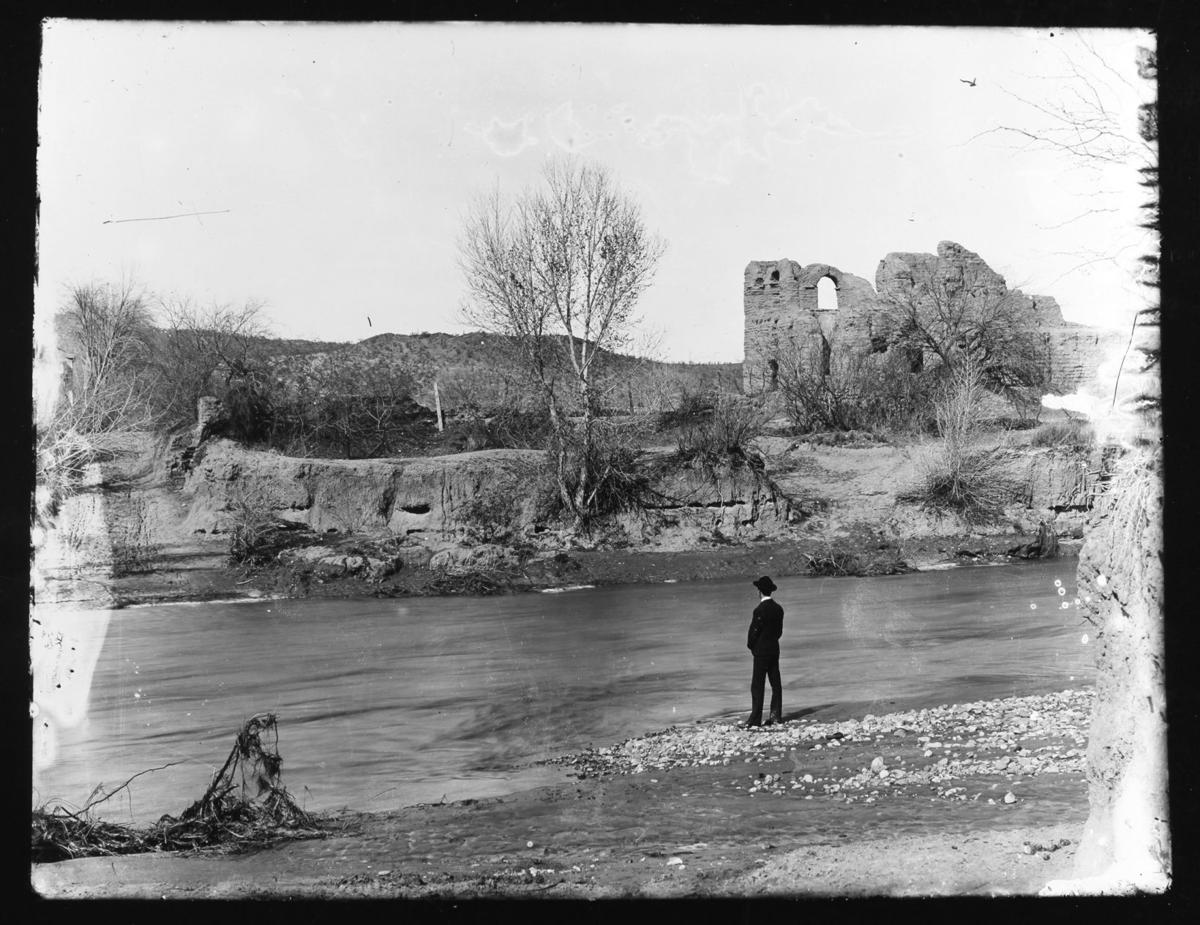 El Convento near the Santa Cruz River in the foreground, around 1910. 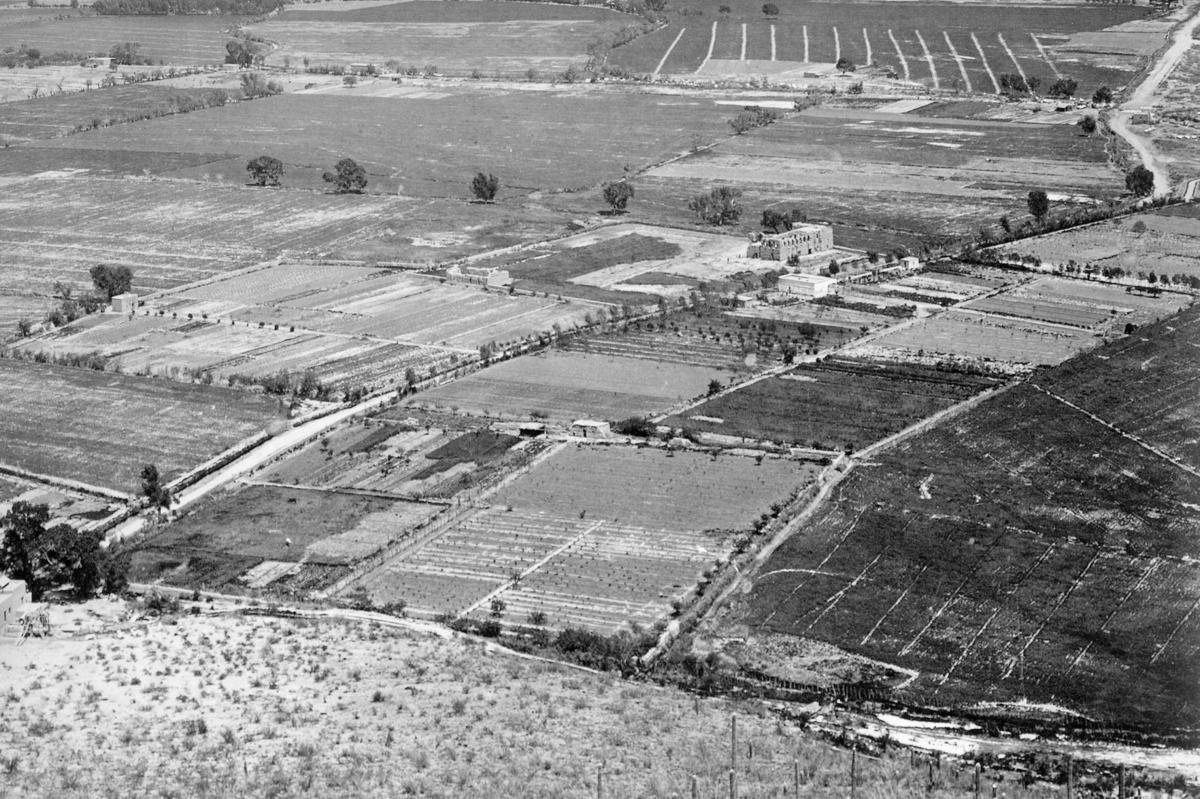 Mission Garden in foreground, ca. 1880. Mission San Agustin complex just east of the garden. The two-story Convento building and in front of it the Leopoldo Carrillo house (white) is center-right in the photo.

City officials halted and then moved work for a $7 million project Monday after historic preservation activists complained that earth movers were grading a crucial archaeological site at or near Tucson’s birthplace.

A private contractor was working Monday morning on a landfill remediation project at a site that is part of what activists hope will be the future Tucson Origins Heritage Park. The landfill, just west of the Santa Cruz River near downtown, lies near where the oldest known agriculture in the United States began around 2,100 B.C., or 4,100 years ago.

The proposed heritage park area, which intersects part of the landfill site, includes areas used by the Tohono O’odham and their ancestors and later by early Spanish colonists. These include the now-buried remains of the 18th century Convento mission complex as well as the site of what once was Mission San Agustín, founded in the 1770s, and its now-re-created garden.

City spokeswoman Lane Mandle said no archaeological sites were disturbed in the earth-moving work, which she described as “prep work” for the remediation project that will remove 300,000 cubic yards of landfill dirt from the site. The work is separate from landfill remediation work recently done for the adjacent Caterpillar division headquarters site planned on land owned by the Rio Nuevo district, she said.

A sign on the western edge of the remediation area says, “Historic site of S-Cuk Son,” and bears a photo of an ancient pit house found there. S-Cuk Son, a sacred Tohono O’odham site pronounced Chuk Shon, gave Tucson its name. Mandle said no land on that particular site was graded.

Diana Hadley, a Tucson historian and preservation activist, said she’s upset at what she called the city’s “lack of respect for the efforts made for historic preservation in the area.” She and others activists felt the city staff should have notified archaeological experts before starting the landfill work.

“The whole site is the site of the mission (San Agustín). Because of the measurements that have been done, we know exactly where the Convento and the chapel are located and where all of the walls around the area were located,” Hadley said.

The overall area is bounded by the Santa Cruz River on the east, Mission Lane on the south, Cushing Street on the north and the Barrio Sin Nombre and Barrio San Agustín neighborhoods on the west.

The area containing historic sites will now be fenced, and an archaeologist will be on hand to monitor future work to insure that historic areas aren’t damaged, Mandle said. Asked why an archaeologist wasn’t present for this work, she said the Tucson firm Desert Archaeology had already visited the area and city officials thought all key sites had been identified.

“It’s absolutely the city’s intent to preserve and protect sensitive archaeological sites adjacent to the landfill. We were working off earlier maps. But there are some discrepancies in exact locations, including a Tohono O’Odham burial site,” Mandle said.

“It was brought to our attention that we could do a better job on that. We will now have Desert Archaeology out to tell us where to site the fence and to monitor the activities adjacent to the site.”

Leaders of the group Friends of Tucson’s Birthplace said it won’t be certain that no major sites weren’t disturbed until the area is more closely examined. The entire origins park area has historic value for Tucson, not just the area with remains underneath, said Hadley, a founding board member of Friends of Tucson’s Birthplace. Tohono O’Odham remains are buried within the planned heritage park area, she said.

“There is a historic site there, similar to the site of the battle of Gettysburg or Antietam, and they’re all sacrosanct historic sites,” Hadley said.

Katya Peterson, a co-chair of Friends of Tucson’s Birthplace, called the city’s work at the site a “travesty.” She and her co-chair Roger Pfeuffer spotted the work after they arrived at nearby Mission Garden for a meeting, and Pfeuffer told her, “I saw dirt flying at the Convento site,” Peterson said.

They immediately notified the media, called the City Manager’s Office and watched through a fence as the earth movers rolled, until city officials arrived and halted work.

Peterson pointed out that the City Council adopted a resolution in 2016 recognizing “the uniqueness of and importance in protecting the area now commonly known as the Tucson Origins Heritage Park.”

Linda Mayro, a Pima County historic preservation official, was also at the scene of the landfill work Monday. She agreed that city officials should have notified historic activists and others interested in Tucson’s birthplace in advance.

“We know where the archaeological features are. They should have been fenced off,” said Mayro, the county’s director of sustainability, conservation and historic preservation.

Mandle, however, said city staff went to many neighbors’ homes in the area and notified them of the upcoming work. The landfill work was approved at a public council meeting on Aug. 8 as part of an $11 million package of improvements for the Barrio Sin Nombre and Barrio San Agustín neighborhoods and other west-side areas near the landfill and Caterpillar sites, she said.

Hadley said she doesn’t remember being told of the work at any such meeting. But now, she said she hopes the flap over the landfill work will lead to approval of strong City Council action to guarantee permanent protection of the entire Tucson Origins site as an historic landmark, and to eventually get started on creating the historic park.

The park was planned to be part of the broader west-side cultural development that voters approved in 1999 for the then-planned Rio Nuevo project. But it was put on hold by city officials in 2008 after they felt the city wouldn’t have the money to build or operate it. Later, the Legislature changed the mission of Rio Nuevo to private economic development, putting the historic park project in deeper limbo.

All that work is planned, “but we can only do this one step at a time,” Councilwoman Romero said.

“The next step is to make sure we at least start a conversation about how to fund these projects with various stakeholders, including the Tohono O’Odham Nation,” Romero said. “We’re talking first and foremost, how do we protect the area from now into the future? Is it special zoning, what is it?”

Linda Ronstadt: Rebuilding plaza would give Tucson sense of place

Development in front of historic cathedral could provide heart and soul of downtown.

Take a glimpse into the evolution of Tucson's culinary scene.

Neighbors are hopeful about landfill remediation, but wary.

Walled in: The original Tucson experience

SCOTTSDALE — Staff members at a Scottsdale diner are sending thanks to a customer who left a $2,000 tip for all of them to share.

The crew was honored Tuesday.

Tucson weather: Above average temperatures continue through next week

No sign of rain in the forecast, but cloudy skies are possible.

Study: Tucson the 2nd most dangerous city for bicyclists

Phoenix didn't fare much better, coming in at number 4.

WILLCOX— The National Park Service says it will boost camping fees at the Chiricahua National Monument from $12 a day to $20 per day starting Jan. 1.

This weekend: Flandrau hosting a day of board games with game designer

The Flandrau Science Center at the University of Arizona, the folks who bring you space up close, will host Board Game Day from 10 a.m.-4 p.m.…

The 81-year-old senator "looks forward to returning to work as soon as possible," his staff told Arizona media outlets.

Demolition is set for early January but local group trying to preserve building.

Environmentalists say bill is an attempt to sidestep the Endangered Species Act.

Trees, soil to be removed from Santa Cruz through Tucson for flood protection

Neighbors and environmentalists are wary about likely habitat damage, but some accept that the $860,000 project is needed to protect public safety.

The city of Tucson stopped construction Monday after historic preservation activists complained that earth movers were grading by the site of the Convento, built by the Spanish in the 1770s.

El Convento near the Santa Cruz River in the foreground, around 1910.

Mission Garden in foreground, ca. 1880. Mission San Agustin complex just east of the garden. The two-story Convento building and in front of it the Leopoldo Carrillo house (white) is center-right in the photo.