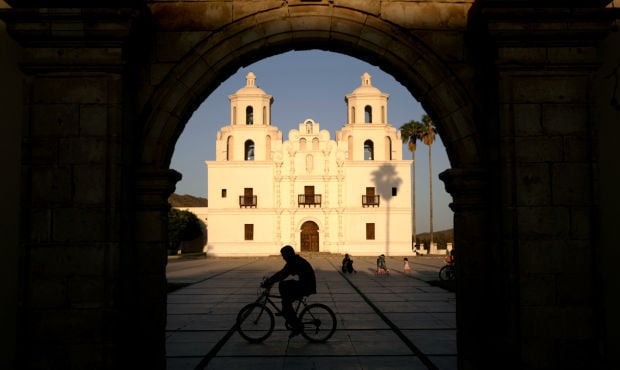 The courtyard of La Purísima Concepción de Nuestra Señora de Caborca, in Caborca, Sonora. The site is on the route of the Kino Mission tours, which will be brought back in October after a four-year hiatus. 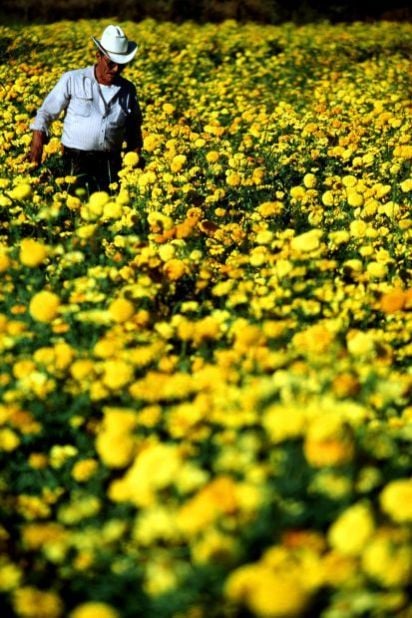 A field of marigolds in San Ignacio, Sonora. The town is one of many in the northern state that the bus tours will visit.

Four years ago, the Southwestern Mission Research Center ceased taking busloads of inquisitive folks to tour northern Sonora, along the routes blazed by Jesuit explorer Eusebio Francisco Kino. The trips, which had been occurring for more than three decades, came to a halt over fears of insecurity in the small towns.

But the center has resurrected its tours, starting with one late next month.

It’s a good sign, not just for the center and its volunteers of Pimería Alta fans, but for many on both sides of the line who long for a time when cross-border trips were common, part of daily life, and not given to second-guessing.

Resumption of the mission tours reflects the reality that traveling in Sonora is not the dangerous activity it was once.

“This is the interface with Mexico,” said Michael Brescia, president of the nonprofit SMRC and associate director of the Arizona State Museum at the University of Arizona.

Brescia said the upcoming tour will allow visitors to “get beyond the headlines.” The headlines, however, had truth to them.

When SMRC cancelled its trips in 2010, the residents of northern Sonora struggled with the chokehold that competing cartels had placed on their towns. Cartel gunmen, armed with weapons smuggled from the U.S., shot it out between themselves or with Mexican law enforcment and military in the Sáric-Tubutama area, about 40 miles south of the border.

There were a number of sensational shootings that shattered the peacefulness of the Altar River Valley.

Tourists stayed away, as did Southern Arizonans with long ties to their ancestral families’ towns of Caborca, Oquitoa, Pitiquitio, San Ignacio and Magdalena de Kino, where the missionary explorer’s remains are interred in the town plaza.

These family connections long preceded the creation of the border in the mid-1800s.

Kino established missions in the Pimería Alta, the region generally composed of northern Sonora and Southern Arizona, in the late 1600s.

The center’s tours — in its heyday there were six a year — took more than 6,000 people to see these communities firsthand, and to meet people like Doña Chata, the elderly caretaker of the church on the plaza in San Ignacio who hosted a Sunday lunch in her small backyard overlooking planted fields irrigated by the acequia, and Gloria Elena Santini, who spearheaded the restoration of the 200-year-old La Purísima Concepción del Caborca in Caborca, which shares similar design and construction with Mission San Xavier del Bac south of Tucson.

Brescia said these connections to the past are personal today.

Before the decision was made to re-establish the mission visits, a trial-balloon weekend trip was made in the spring, said David Yubeta, a longtime volunteer who traveled with docents from Mission San Xavier.

The towns were peaceful and there were no hints of danger, said Yubeta, a retired preservationist for the National Park Service at Tumacácori. In Tubutama, the police were present, which reassured him.

But what was more telling was that the residents were joyful that a tourist-filled bus — the first one in several years — rolled into their towns. People welcomed the Kino followers.

“They asked if the tours were returning,” Yubeta said.

Dale Brenneman, a Mission Center board member, sure hopes so.

He said Sonoran friends and contacts report that daily life is calm on the Kino trail. “I don’t see a particular threat to Americans coming down,” said Brenneman, curator of documentary history at the State Museum.

What the center and the townspeople hope is that the next bus of visitors will return to Tucson and tell their friends and families that it’s all right to travel in Sonora. “They’ll be our ambassadors,” Brenneman said.

Take a trip. Learn some history and culture. Get a deeper understanding of our shared region. Contact Brenneman at tours@southwestmissions.org or at 621-6278.

These are the stories that Star reporter Ernesto Portillo Jr. considers his best of 2014.

He wrote extensively about Mission San Xavier and the Tohono O'odham.

The courtyard of La Purísima Concepción de Nuestra Señora de Caborca, in Caborca, Sonora. The site is on the route of the Kino Mission tours, which will be brought back in October after a four-year hiatus.

A field of marigolds in San Ignacio, Sonora. The town is one of many in the northern state that the bus tours will visit.