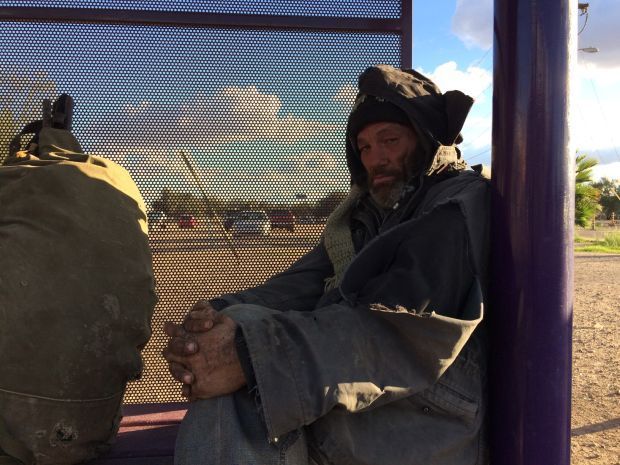 Mike Frierson, 45, sits at a bus stop on West Congress Street in downtown Tucson. Frierson isn't part of the Safe Park homeless camp nearby but has been staying in a drainage tunnel.

You could catch all the big angles on Tucson’s debate over homelessness Tuesday afternoon along West Congress Street.

On Congress at Church Avenue, aside the Pima County buildings and Veinte de Agosto park, you find the “dream pods” and tents that have become the local symbols of homelessness and topics of seemingly constant news stories and debate.

Two blocks west, in the State of Arizona building, the Rio Nuevo board was meeting. Behind closed doors, they considered in executive session their legal options for getting involved with the homeless camp marring the area they’re charged with reviving.

Another four blocks west, the board of the Tucson Pima Coalition to End Homelessness was debating its plans and got into a bit of a prickly discussion about how quickly to move forward. “How long can we as a group avoid taking actions because we don’t have sufficient information?” board President Tom Litwicki asked.

The picture I’m left with is of a community that remains in deep deliberations about the problem of people living on our streets, in the washes and under bridges and tunnels. Believe it or not, we are addressing the problem now, if incrementally. What’s lacking are some leaders with a plan and a sense of urgency to make a big difference quickly.

Each of those locations along Congress give you reasons for hope and for dismay. Up at Church, one of the pods is painted with an advertisement for the Casa Maria Soup Kitchen. Brian Flagg‘s group, which runs the soup kitchen, paid $500 for the sponsorship, money that went into creating more dream pods. For me, that’s a bit dismaying: This means the pods are now self-propagating.

“We think Safe Park’s a great thing because it brings home the reality of Tucson,” Flagg told me at Casa Maria Tuesday.

On the hopeful side, employees of the Primavera Foundation and other social-service agencies stopped by the Safe Park site Tuesday morning and found some people who wanted to take advantage of services they didn’t know about.

“We did have some folks who were wanting to come off the street and had income to do so but had credit issues,” said Kay Wolfstetter of Primavera.

That’s something the agencies can help with. They can help people get into housing despite credit problems that might usually set off alarms among landlords.

In fact, the whole discussion the dream pods have inspired has ignored the fact that, while shelters are largely full, there are diverse other programs and services people can use, said Peggy Hutchison, CEO of Primavera.

Down the street at 400 W. Congress, Rio Nuevo Chairman Fletcher McCusker didn’t discuss the board’s closed-door meeting on the protest camp. The agenda item left the impression that Rio Nuevo might enter the federal civil case under which the city was ordered to let homeless people sleep on the sidewalks, thanks to their free-speech rights.

That would be dismaying: We don’t need another party making this whole discussion about Safe Park leader Jon McLane and his dream pods when there is a much broader set of actions we need to discuss and take.

On the hopeful side, though, McCusker and McLane had a productive hallway conversation about what each of them wants. McLane’s goal: Establish what amount to homeless camp sites with storage and bathroom facilities, one in each ward.

Under the I-10 overpass and down the street at the Pima County Housing building, 801 W. Congress, the board of the Tucson Pima Collaboration to End Homelessness seemed to be getting bogged down in bureaucratese.

“Do we foresee that as a board we’ll be involved in decision-making regarding the development of this process or not?” board member Jordan Layton asked about an effort to end homelessness among veterans.

For me, it was one of those dismaying phrasings that make you wonder whether efforts to end homelessness will ever make progress when our efforts are tied up in bureaucratic procedures.

And yet Layton himself, other board members and especially president Litwicki seemed to display urgency about the issue, urgency I didn’t see when I last visited the coalition’s meetings a year ago.

Litwicki pushed the board to move past the problem of lacking certain information in making applications to the U.S. Department of Housing and Urban Development for more resources. Applications made this spring won’t produce help until July 2016, he pointed out.

“We’ve got to move forward,” Litwicki told me after the meeting. “We can’t wait another year.”

He favors a triage approach where the most vulnerable, chronically homeless people are treated first.

“If all of those who get HUD funding were first required to help those most vulnerable, you and I wouldn’t be stepping over that guy on Congress,” he said.

He was talking about the generic chronically homeless man on Congress, but walking back up the street I met a specific one, Mike Frierson. Bundled against the settling cold, he told me his biggest problem isn’t his long-ago felony conviction for smuggling some pot across the border — it’s his suspended driver’s license.

“I could do a lot of jobs,” Frierson said. “If I had wheels I could do something.”

Every homeless person has an obstacle or two. One at a time, it seems, we’re moving closer to removing those obstacles. Now if we could just move faster.

Denver-style policy would mean the end of plywood houses on downtown sidewalks.

Mike Frierson, 45, sits at a bus stop on West Congress Street in downtown Tucson. Frierson isn't part of the Safe Park homeless camp nearby but has been staying in a drainage tunnel.