How many jobs must World View Enterprises create in order to comply with its deal with Pima County? And at what salaries?

These are fundamental questions when your local government is planning to spend $20 million in construction costs plus interest to keep a promising local business in town.

Questions, yes, but not ones that may be answered.

At midday on Friday, Jan. 15, the county posted 83 pages of information about the deal to keep World View, a near-space research and travel company, in town and build it a new headquarters. The company has about 25 workers but is projecting it will employ more than 400 within four years — a fast rate of growth.

The basic idea is that World View will pay back the $20 million through lease payments and eventually take ownership of the building. But it has to comply with conditions that specify minimum amounts of job creation and salary paid. The lease-purchase agreement, made public among the 83 pages, says so.

The “county may terminate this lease at any time if World View fails to maintain the employment and salary level applicable at that time and set forth below.” What does it say below?

“For a 4-year period starting on the one year anniversary of the commencement date, World View must employ at least the number of FTE employees shown in Line 1 of Exhibit E....and those employees... must have an average annual salary over each measuring period of at least the amount shown in line 2 of Exhibit E.” And so on for other periods of time.

This Exhibit E, the key to understanding what World View must do in order to conform with the deal, was not included, so I asked for it. The county wouldn’t give it to me.

It turns out that’s because World View didn’t want it released.

“They consider that information to be proprietary,” Deputy Pima County Attorney Regina Nassen told me Thursday. “So we agreed to keep it separate, put it in that exhibit and not make it public.”

The problem, of course, is that under Arizona law, that document would most likely be considered a public record. I’ve made a formal request and haven’t got a response yet.

Under the terms of a separate nondisclosure agreement between the county and World View, the county must tell the company when someone has requested a document considered confidential in the agreement, and the company has up to 10 days to seek an injunction keeping the county from releasing it.

This wasn’t the case last March when the city made a deal with HomeGoods to put a large distribution center in town. That deal is different in that HomeGoods is constructing its own building, but it has requested reimbursements of its construction-related sales tax and any building permit fees through an economic-development incentive program.

The first half of those reimbursements happen only after HomeGoods provides proof first of creating 30 jobs paying an average of 125 percent of Tucson’s median salary. Then the second half comes after the company provides proof of creating an additional 30 jobs at that pay rate. All of this must take place within three years.

A “clawback” provision states that if the company doesn’t completely fulfill its side of the deal within three years, the city takes back any money it has reimbursed to the company.

These are relatively simple terms but were important to the City Council’s consideration of the deal. I know the county is desperate to keep World View here and to help the Aerospace Corridor start flourishing, but these terms were key for the public and elected supervisors to understanding the deal.

How can we be expected to support the deal when we don’t know one of its most important provisions?

One of the most interesting episodes in Pinal County Sheriff Paul Babeu’s life story came under harsh scrutiny in Phoenix this week.

Babeu, as you may know, is a leading candidate for the Republican nomination for the U.S. House of Representatives in District 1, which includes much of the northwestern Tucson metro area. Starting in 1998, he spent a couple of years as the top administrator at the DeSisto School, an unusual boarding school for troubled teens in Stockbridge, Mass.

I’m one of several Arizona journalists who has poked around that history, wondering what role Babeu may have played in what the state of Massachusetts later deemed to be abusive disciplinary practices. Of that group, Dave Biscobing of Channel 15 in Phoenix has gone the furthest, traveling to Massachusetts in 2012 to check it out.

This week, Biscobing revealed a home video taken at Christmas 1999 that showed Babeu understood and supported practices such as “cornering” — having students sit in a corner for hours or days. Or sending them to the “farm” where they might do manual labor for days, weeks or months, sometimes with limited food and water.

A Babeu campaign spokesman, Barrett Marson, told me this week that Babeu had no role in disciplining students. And for what it’s worth, from his comments in the video, Babeu seems to have sincerely thought the methods helped the students.

Rivals in the race, though, were quick to try to turn this 17-year-old case to their advantage. Democrat Tom O’Halleran called for Babeu to “come clean” about the school, and Republican Wendy Rogers, who is new to the race, called on Babeu to drop out.

Pima County Supervisor Ray Carroll got back from a couple of days in Puerto Peñasco this week, having switched places with the mayor of the Mexican city, Ernesto “Kiko” Munro, who came to Tucson.

Carroll had busy days, meeting with the city council, Mexican navy and other local officials, and also had an unexpectedly hostile moment with a local journalist, Rafael Amparán Quezada.

During a press conference, Amparán Quezada questioned Carroll a bit harshly, as he acknowledged to me, over why the United States puts out “warnings” for travelers in Mexico when we can scarcely avoid being shot on this side of the border ourselves. A good question, of course, but not an issue that Carroll is responsible for.

And, of course, he was in Rocky Point to celebrate the cross-border relationship, not spoil it. But it’s good to know we reporters can be such killjoys on both sides of the line.

Steller: Despite death, some good news at our trailer parks

An out-of-state company is trying to make a buck by providing decent housing.

Tucson members of Satanic Temple plan to give convocation before Phoenix City Council.

Republican has earned a reputation for reaching across the aisle.

Plan would have county build new facility and space port.

Pima County smart to plan for the future. 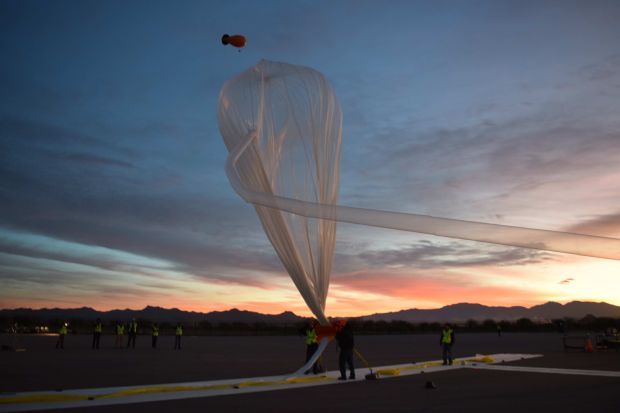 World View on Feb. 20 flew the first parafoil from the edge of space at a record-breaking height of 102,200 feet.