Steller: A cracked windshield, an arrest, the Pima County jail, then ICE
Share this
1 of 5 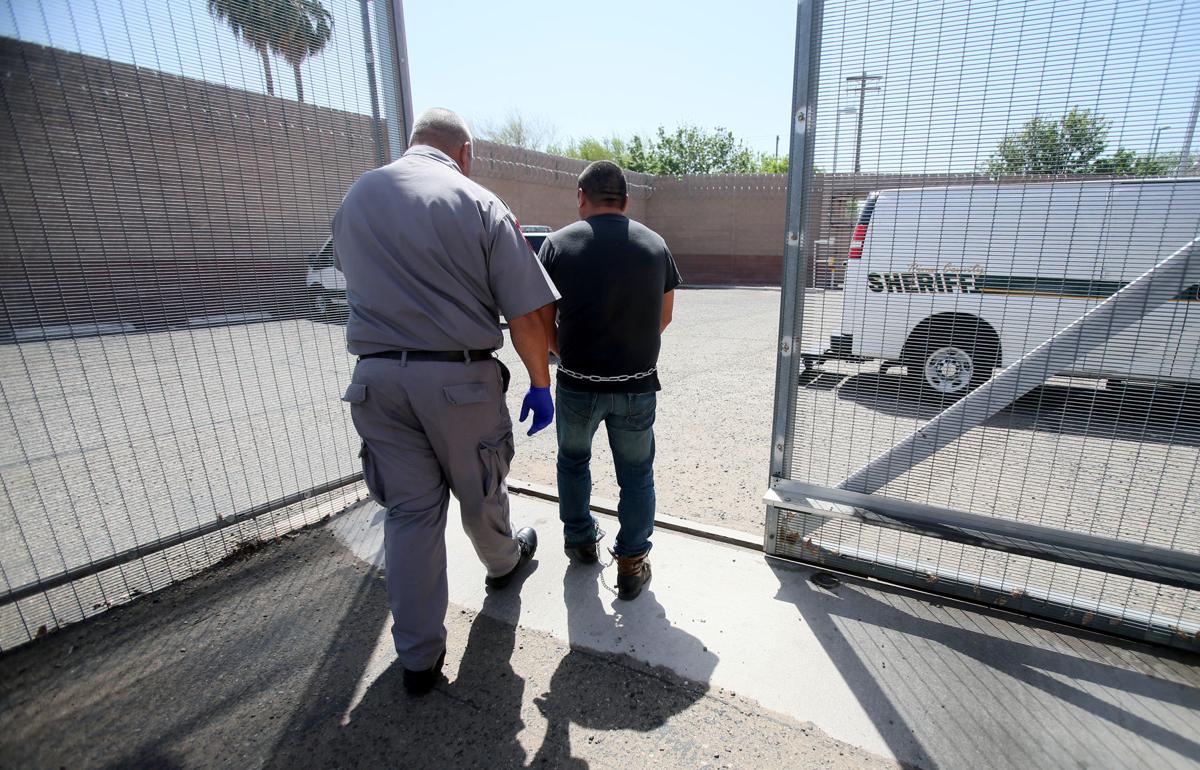 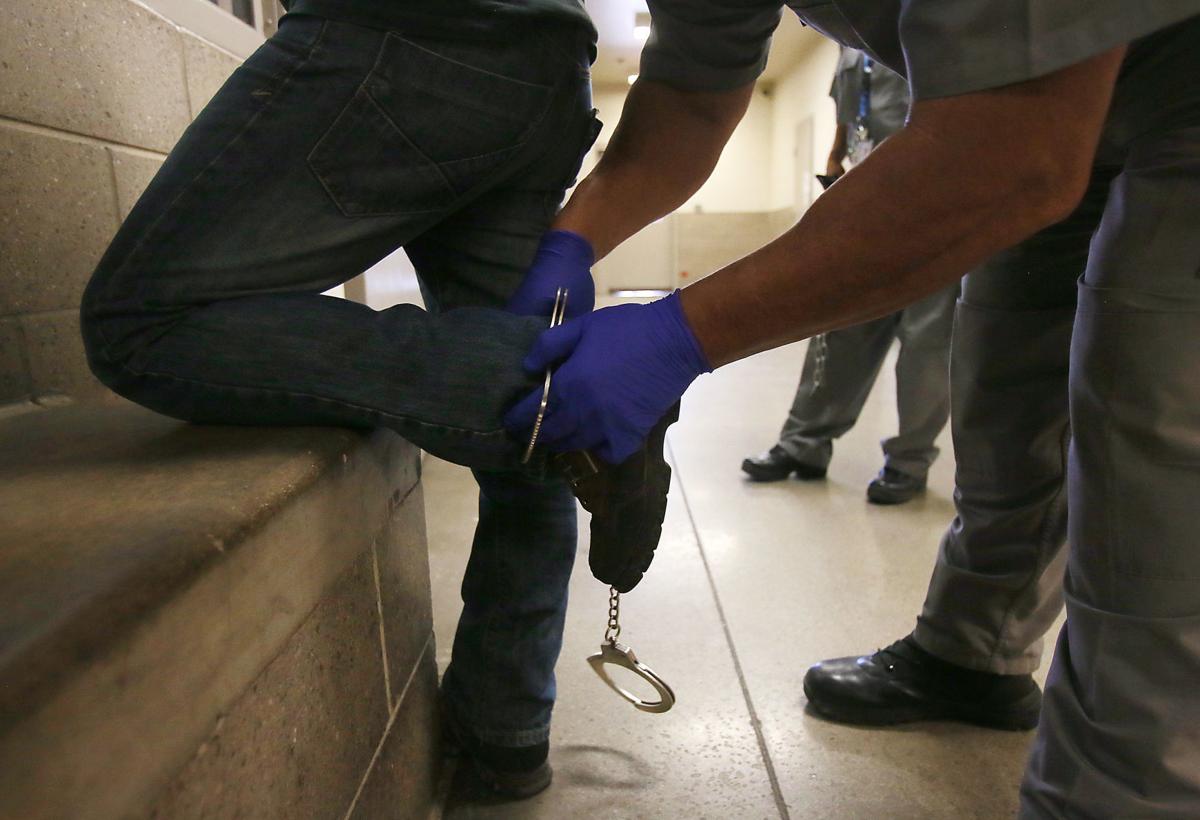 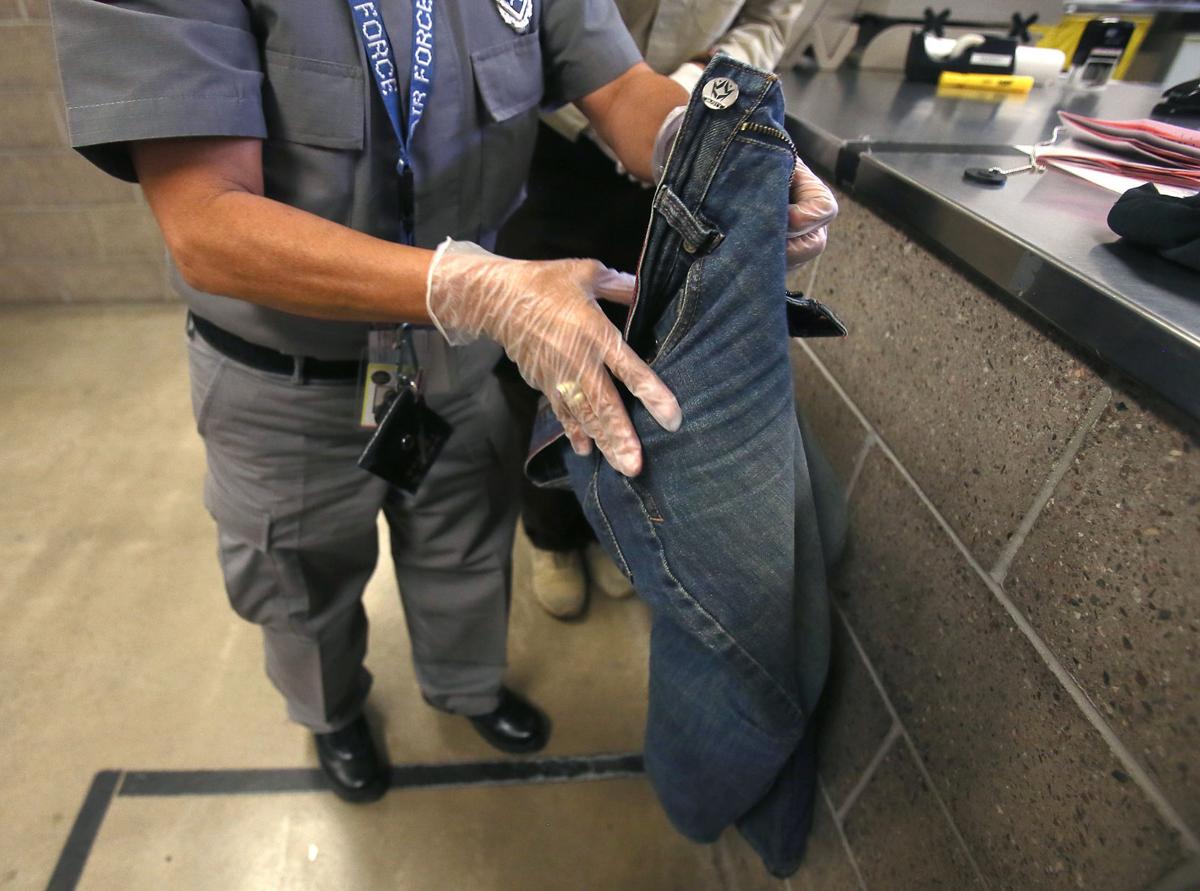 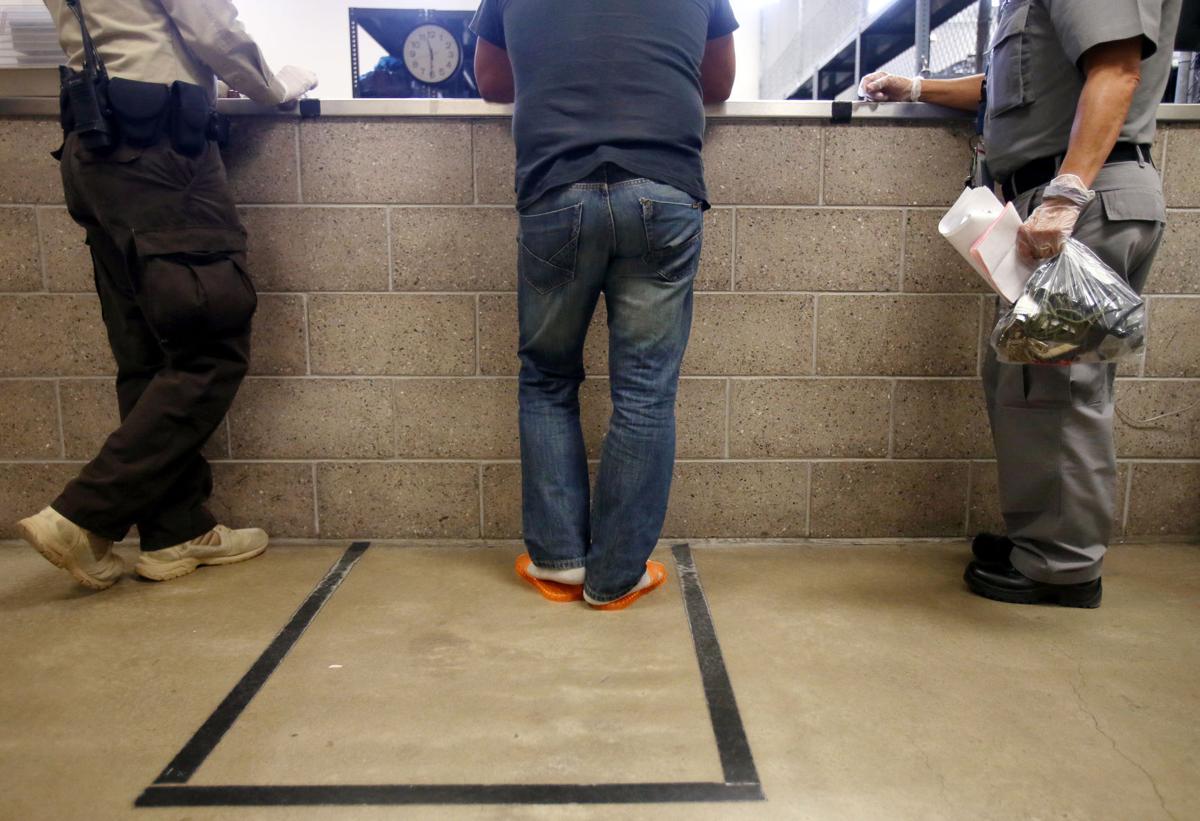 Dario Alvarez Nava’s downfall was a cracked windshield on the 2000 Dodge Caravan he drove to construction sites around Tucson.

He used the van to sell workers burritos, tacos and sandwiches.

“In all the time I’ve worked here, the police never stopped me. I drive well,” Alvarez Nava said in Spanish on Friday by phone from the Eloy detention center. “That was my error — having a cracked windshield.”

When the deputy asked him for his name, he gave a false one because he’s in the country illegally and afraid. He was arrested for giving a false report to law enforcement.

I had a chance to speak briefly with Alvarez Nava at the Pima County jail because in mid-March, Sheriff Mark Napier had, at my request, begun arranging for me to observe the next handover of an inmate to Immigration and Customs Enforcement. Alvarez Nava, 47, happened to be the next one.

So on March 31, photographer Mamta Popat and I were there when he went into a changing room wearing his orange jail garb and came out wearing the blue jeans and black T-shirt he had been wearing when arrested the day before.

Then two security guards who work for an ICE contractor walked him down a long gray corridor and to the transportation office. They clicked cuffs and shackles on him, then shuffled him out to a white van for the drive to Eloy.

This transaction, the handover of local inmates in the country illegally to federal custody, has become one of the key flashpoints in the immigration policies of the new president.

The Department of Homeland Security is trying to shame jurisdictions into holding these inmates beyond their release times, to give ICE a longer period to pick them up. The U.S. attorney general is threatening to withhold federal money from cities and counties that won’t hold onto inmates for up to 48 hours after their release time.

None of that is affecting the usual policies of the Pima County jail, though. When ICE requests a “detainer” of an inmate in a jail, all that means here is that the jail will let ICE know when it has received word the inmate is to be released. That gives ICE about two hours to send somebody to the jail to pick up the inmate.

That’s much, much less than the amount of time President Trump’s ICE is requesting. In recent announcements, the agency asked for 48 hours advance notice before an inmate with a detainer is released. Then, the agency wants up to 48 hours more to pick up the inmate. In other words, they’d like up to 96 hours of notice. In Tucson, they don’t get anything close to that.

The request for 48 hours of prerelease notice is unworkable in most cases at the Pima County jail. That’s because judges order inmates released, or inmates have their bonds paid, without any early warning to the jail. Once they hear an inmate with an ICE hold is to be released, they call ICE to let them know, and the clock starts ticking.

“We don’t think it’s unreasonable to ask ICE to be there in two hours,” Napier told me. “They’re the ones saying we’re not cooperating. The Trump administration is the ones calling out sheriffs’ offices, and it’s frustrating a lot of people.”

It wasn’t Alvarez Nava’s first time in custody — but he is not some sort of hardened criminal. He came to the United States illegally from his home state in the south of Mexico, Guerrero, in 2002, he said. The next year, he was convicted of DUI in Los Angeles and was sentenced to 13 days in jail and 36 months of probation. That’s his only criminal conviction.

However, he’s been sent back to Mexico four times. The first time, he told me, he was deported from San Diego to Tijuana after it was discovered he didn’t have documents to be working construction at a military base.

The last time he was officially returned to Mexico, he said, was on Dec. 5, 2012, when he was traveling by his own choice to Guerrero. He was taking a bus from Tucson to Hermosillo, where he planned to take an airplane to Mexico City. At the border, U.S. officials made a point of stopping him, questioning him and processing him out, even though he was going home of his own free will, he said.

His attempt to live back home in Guerrero didn’t go well, he said. Not long after arriving back in Guerrero in late 2012, he recounted, the local mafiosos kidnapped him, and when he didn’t have enough money, they demanded he go to work selling drugs. So he gave up and fled north again, back across the border to Tucson.

“They don’t just shoot you. They torture you to death,” he explained, his eyes welling up. “I decided I’d rather die in the desert than have them torture me in Guerrero.”

The Pima County jail hasn’t freed anyone with an ICE detainer in 2016 or 2017, Napier told me. That’s because ICE agents or its security contractors from the G4S company — formerly Wackenhut — always make it to the jail in time.

But what if they don’t? Why would Napier release people who are in the country illegally and accused of a crime? He says his hands are tied by case law.

“An ICE detainer does not constitute a legal basis to detain somebody,” he said.

When I asked the Pima County Attorney’s Office for its legal reasoning, Tom Weaver, the chief civil deputy, pointed to a list of court decisions from Rhode Island, Pennsylvania, Oregon and Illinois stating that an ICE detainer and an administrative warrant are not sufficient reason for a local jail to hold somebody.

“As you can see, there have been a number of cases around the country in recent years which have raised doubts about the validity of these holds,” Weaver said in an email. “As a result, many jurisdictions do not honor the holds and release people when the conditions under which they are otherwise being held (e.g. bond, etc.) are satisfied.”

But that legal position is not universally held.

Pinal County Sheriff Mark Lamb told me his jail will hold inmates who have an ICE detainer past the point when they’re ready to be released, if necessary. But it’s never necessary to wait anywhere near 48 hours, since the ICE office is just down the street from the Pinal County jail.

“That’s what the people of Pinal County expect,” Lamb said. “They’re not looking for me to put criminals back in the community.”

Under a Jan. 30 executive order issued by Trump, ICE began in March publishing regular lists of which counties and cities have released inmates despite an existing ICE detainer.

That’s what has angered Napier and some other sheriffs. The federal government is shaming them for something that, in their view, they are not legally permitted to do — holding people after their release has been ordered.

The most recent publication lists jails in New Mexico, California, New York, Oregon, Minnesota, Ohio, Pennsylvania, and Texas as having released people whom ICE had requested be held. None in Arizona have been listed.

Here, thanks in large part to the state’s robust immigration enforcement infrastructure, they are able to pick up inmates like Alvarez Nava, whose girlfriend’s daughter covered his $250 bond. The likelihood is, now that he’s in federal custody, he’ll be deported again.

But just as likely: He’ll scratch his way back again. His girlfriend is here, and for him, Mexico holds only fear.

In Mexico, he worried aloud, the mafias are linked, from state to state, ocean to ocean.

“They talk with each other,” he said. “That’s why I’m afraid to return to Nogales, or to any part of Mexico.”

Tucson weather: A return to above average temperatures

Mid-week temps are expected to be 8 to 12 degrees above normal.

Man gets 3½ years for ‘abhorrent’ abduction of 2 crossers

Two men were held at gunpoint, zip-tied to chairs, threatened with acid in Sells.