It would be understandable if you felt some vertigo after reading about the bribery indictment that shook the state Capitol last month.

When a key political player, a statewide elected official and a prominent businessman are accused of an elaborate vote-buying scheme, it has a way of making you ponder darker possibilities. If this scheme was going on under our noses, for example, what else don’t we know about? And is it possible that’s the way things really run?

After talking to some experts last week, I can’t help but conclude a form of corruption plays a central role in Arizona’s government, but the type of out-and-out bribes laid out in the indictment may not be so pervasive.

Bribery, of course, remains illegal. But what some researchers call “legal corruption” — the use of vast sums of private money to pervert government processes and decisions in favor of those donors — is pervasive.

When you peer into our politics, that’s the bottomless hole that should cause your vertigo.

The indictment of lobbyist Jim Norton, businessman George Johnson and former corporation commissioner Gary Pierce and his wife, Sherry, leads us to this bigger problem, but indirectly. The upshot is that Johnson is accused of funneling $31,500 to the Pierces via Norton. In exchange, the indictment says, Gary Pierce voted the way Johnson wanted on a utility issue, saving Johnson from his tax obligation.

They’ve said they are innocent and will fight the charges.

Johnson, a longtime developer, runs a water and sewage company in San Tan Valley. He wanted ratepayers to — get this — cover the cost of the personal income tax he accrued from running the utility. The staff of the commission recommended against the idea, but Pierce and two other commissioners voted yes.

The result: Johnson’s income taxes were paid for by customers — an unbelievable scam.

But that kind of deal, if it happened, may be isolated. Not all corruption comes in the form of cash in an official’s pocket.

I spoke with an economist who researches political corruption in the states, Oguzhan Dincer of Illinois State University. He and his colleagues looked at measuring corruption according to the number of criminal convictions, but that captured too little of the problem. Instead, they chose to measure perceptions of corruption by surveying journalists who cover the state government — not a great measure, but better than mere convictions, they concluded.

They also separated the concept of illegal corruption from legal corruption. Dincer and colleague Michael Johnston define legal corruption as “the political gains in the form of campaign contributions or endorsements by a government official, in exchange for providing specific benefits to private individuals or groups.”

I asked Dincer if the 2010 Citizens United case has increased legal corruption in the states by essentially turning what was illegal — the unlimited spending of corporate and union money to influence politics — legal.

“I think so,” he said, “because at the state and local level, you can influence everybody with very little money. The legislative politicians get away with murder at the local level.”

Arizona ranked moderately high in the perception of illegal corruption, but those journalists surveyed called legal corruption in the state government “extremely common.” (I was not surveyed.)

So what’s perhaps more important to the indictment story is who Norton and Pierce are, and what else they have been doing. Norton is a Republican lobbyist well-connected to Gov. Doug Ducey, a college friend, and linked to the movers of dark money in Arizona. The state’s first prince of dark money, Sean Noble, helps run the firm that Norton founded, Axiom Public Affairs.

“It is telling that you have Jim Norton from Axiom, who is very close to Sean Noble, very close to the governor, very in favor of the use of dark money,” Rep. Ken Clark, a Phoenix Democrat who has worked on campaign finance issues, told me.

“He suddenly finds himself in trouble.”

Pierce is also an important character. The original public allegations of misdeeds against him were not related to Johnson Utilities. They were about his dealings with Arizona Public Service, the state’s largest utility, and his son Justin’s run for secretary of state in 2014. The FBI interviewed him and APS officials in June of last year.

Bob Burns, a Republican corporation commissioner, has been running a one-man campaign to force APS to disclose how it spent money in the 2014 election. About $3.2 million was spent in dark money contributions to help corporation-commission candidates whom the utility supported. APS has never admitted nor denied being the source of the money, but Burns is trying to force it to disclose its political spending from that era and in the future.

“They do have the legal right to spend it,” Burns said.

“If that’s the case, then they need to report in a timely fashion so the voters and ratepayers know at the time they vote what is the situation.”

“We need to know how the utility was able to make this dark-money system work,” he continued. “We’re pretty sure they took the money and donated it to a nonprofit organization that did not have to disclose their donors.”

The same dynamic, and some of the same players, operates in the state Legislature as in the Corporation Commission.

In the Legislature, it’s the Arizona Chamber of Commerce and Industry that pulls the strings. You may recall the conversation that reporter Ben Giles of the Arizona Capitol Times overheard on the floor of the state Senate near the end of the session. He overheard Sen. Steve Smith tell Sen. Debbie Lesko, who questioned whether the chamber supported a certain bill, “We run everything through them. Everything.”

The chamber has been a massive donor for and against initiatives and candidates, and one of its big supporters is Arizona Public Service, the utility that appears to have tried to pick its own elected regulators through donations of dark money in 2014.

Last session, the chamber notoriously pushed bills that will restrict citizens’ ability to put initiatives on the ballot.

Before that, in the 2016 session, the chamber supported a broad effort to let money flow more freely in Arizona politics.

SB 1516 reduced the state’s ability to force dark-money groups to disclose their donors, loosened rules on gifts to candidates and allowed the transfer of donations among candidates.

It was a massive expansion of the power of big money to pervert our political processes by making elected officials even more responsive to money than to their constituents.

The chamber, Clark said, “has always been there shoulder to shoulder with APS when it comes to laws that undermine reasonable disclosure in our political system. It was APS and Chamber of Commerce lobbyists who we saw running around the Capitol convincing Republican legislators that it was OK to vote for this.”

While it’s this legal corruption we should worry about, first and foremost, the pervasiveness of this sort of corruption may also facilitate illegal bribery, Dincer told me.

Or, as Clark put it, “This embracing of dark money has created an atmosphere of permissiveness.”

If you feel woozy thinking about it, please sit down.

Trump's symbolic border wall led to symbolic resolutions against it and a final symbolic counter-resolution.

Arizona probe in bribery case has other, unnamed targets

Federal prosecutors don't want information about other potential targets in the Corporation Commission investigation to be disclosed.

Federal agents threatened to indict the wife of former utility regulator Gary Pierce if he did not plead guilty to bribery charges, attorney tells judge.

A voter advocacy group, union and Democratic lawmakers also seek to void the law that allows some groups to make anonymous political contributions.

Prosecutors say email should help prove that Gary Pierce purposely sought to conceal a land deal at the center of bribery case.

There are swamps to drain in Arizona and Washington, state senator says

He decided to air "Mr. Smith Goes to Washington'' Tuesday for colleagues and staff. 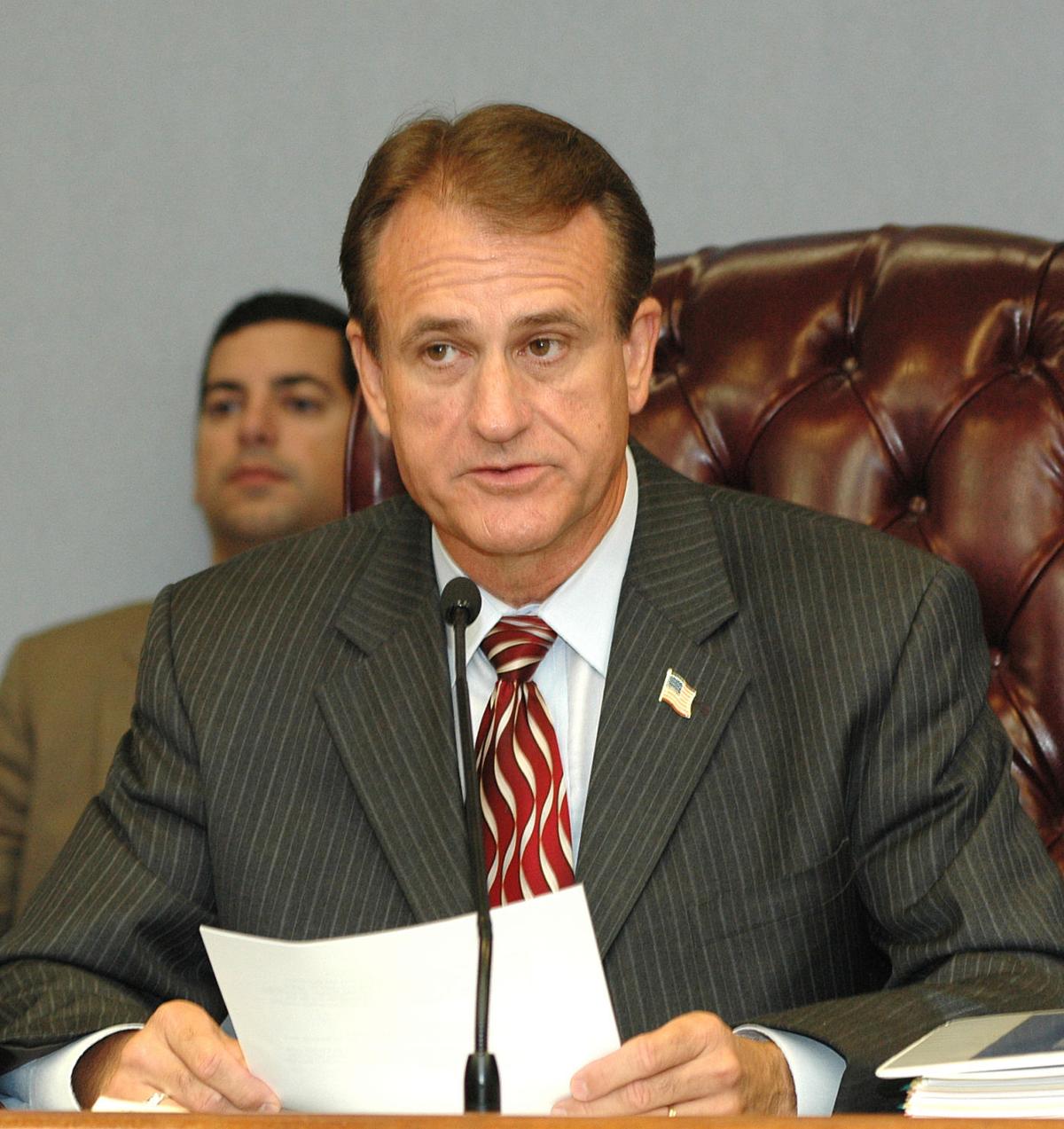