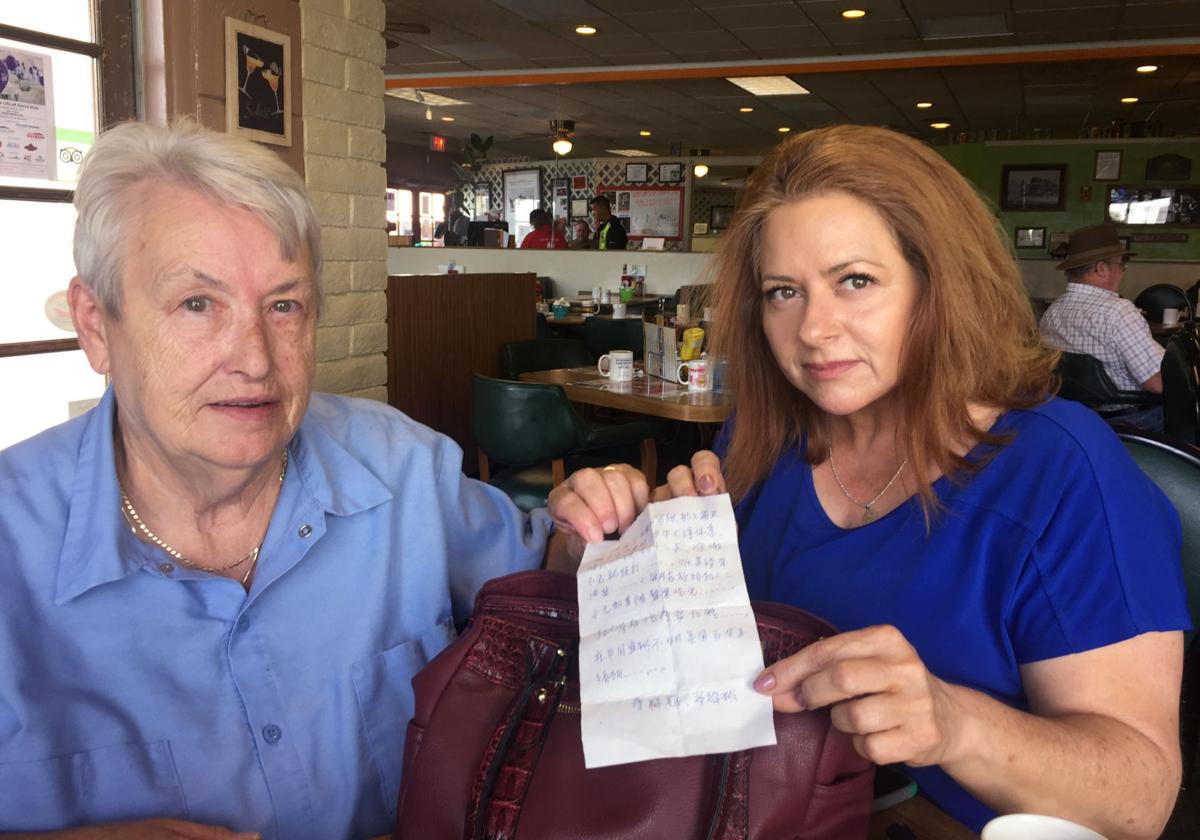 Christel Wallace, left, found a note in the purse she bought at Walmart. Her daughter-in-law Laura Wallace posted the note on Facebook. 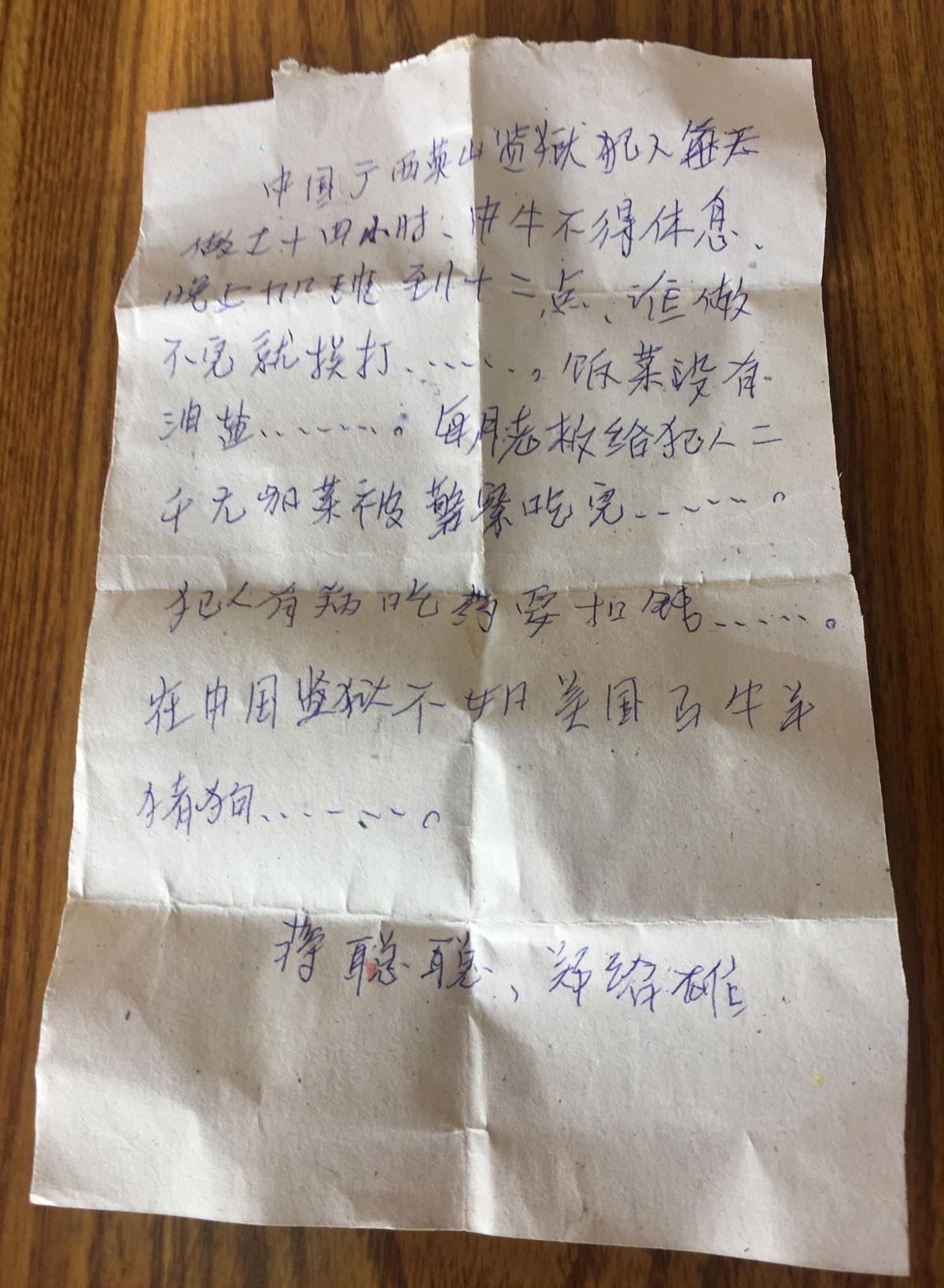 Christel Wallace found this note, written in Chinese, in a handbag she purchased a Walmart. 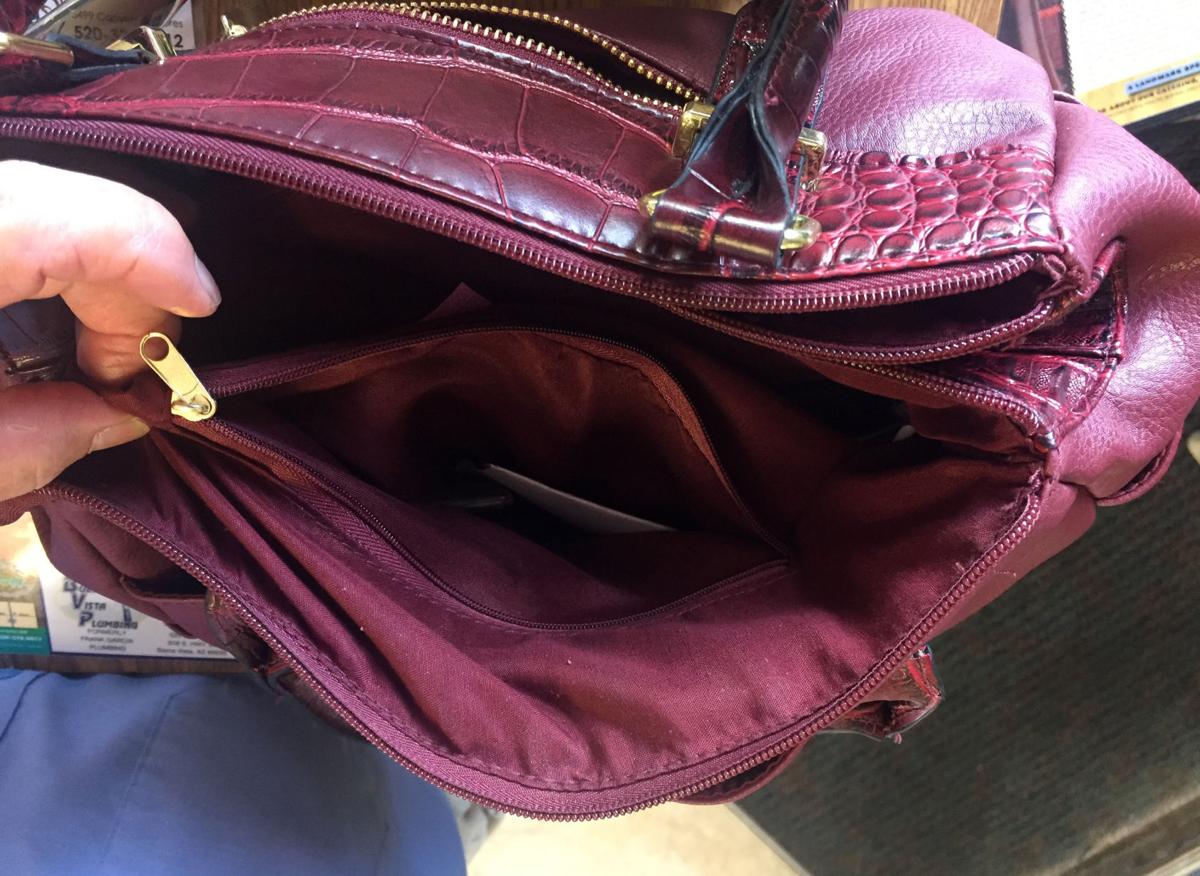 The inner pocket of a handbag where Christel Wallace found the note written in Chinese.

A couple of months after Christel Wallace bought her new purse at Walmart she opened a small zipper pocket deep inside.

In March, she unzipped it for the first time to put a key there. Way down inside, she found a two-inch-by-two-inch piece of folded up paper — and promptly threw it in the garbage. Then she thought better of it, picked the paper out of the waste basket, opened it, and found a note written in the characters of an East Asian language.

Wallace showed it to her daughter-in-law, Laura Wallace, who found out the language was Chinese. Laura Wallace posted a photo of the note on Facebook April 23, as first reported by KVOA TV, and Chinese-speaking friends translated what turned out to be a sort of cry for help from a prison laborer on the far end of the global supply chain.

The writer said he was in prison in Guanxi, China. He (we’re presuming the writer is male) said inmates are forced to work 14 hours per day, until midnight. Those who don’t finish their work are beaten or don’t get food. They are paid just a little bit and if they get sick the cost of medicine is deducted.

He said they are treated worse than animals.

“My heart went into my stomach,” Christel Wallace said.

She had received a message from the underbelly of global trade, the place we’re not supposed to think about when we casually browse the aisles looking for the cheapest price.

We can’t know, of course, that the note is authentic. Somebody could have slipped it in the purse anyplace along the path from producer to retailer. A competitor, a prankster, an activist seeking to prove a point. It’s possible it’s a fake.

But the note has the ring of authenticity. It is written on coarse, cheap paper, about 5-by-7 inches, and those who translated the note found it to be poorly worded as if by someone without much writing experience.

Also, it is just the latest of these notes to appear in consumer products made in the overpopulated and poor parts of the world for those of us in the wealthy parts. They’re found maybe once or twice a year. In 2011, a woman in Oregon found a note from a Chinese prison camp in a package of Halloween decorations called Totally Ghoul.

Two years later, CNN tracked down the man who claimed to have written the note, one of 20 he said he hid in products made at his camp. He had since been released. He was a member of the Falun Gong religious group and said he and others were subject to beatings, torture and sleep deprivation, but he would stay up late, after the other inmates were asleep, to write the notes to the outside world.

Just as important in evaluating the note’s authenticity: What it describes is not surprising.

China has for decades used prison labor as it built up its position as a supplier of cheap goods to the world. The “laogai” were, or are, a network of prison labor camps similar to the Soviet Gulag. They were formally abolished in 2013 but have persisted in different forms, Amnesty International reported.

Regularly, the United Nations, various world trading partners and retailers in developed countries have put pressure on suppliers in China to treat their workers humanely.

A law professor at the University of Hawaii who specializes in international labor law pointed out to me there are treaties, laws and international standards intended to protect workers. A legal framework exists that theoretically protects Chinese prisoners and others from being forced to work to provide us cheap products, Professor Ronald Brown told me.

That’s even true of companies like Walmart. In response to my request for comment on the Sierra Vista note, a Walmart spokesman wrote: “I can tell you that one of our requirements for the suppliers who supply products for sale at Walmart is all work should be voluntary as indicated in our Standards for Suppliers.” He pointed me to those detailed standards.

And yet, obviously, our hunger for cheap products, and the retailers’ need to keep their prices down, means people cut corners. Suppliers may hide the true source of their products. Retailers may look askance. The bottom line is the bottom line.

The director of a New York-based organization called China Labor Watch told me Walmart, despite its standards, is particularly problematic.

“Walmart are bad actors in the situation,” Quiang Li said through a translator. “They set a very bad example for the other companies.”

Li said such notes making it out of prison camps in China are relatively rare. If his group can specify where human rights abuses are occurring, they try to send in undercover workers or reporters to document the problems, then expose them and get them corrected.

The note pierced the consciences of Laura Wallace and her mother-in-law Christel, who still carries that maroon bag with her. It cost her around $25, she said. Now she knows why.

“You go into a store, buy it, use it,” Laura told me as we sat at a cafe in Sierra Vista Friday. “You don’t take a second thought about how it was created, who created it.”

Christel Wallace, left, found a note in the purse she bought at Walmart. Her daughter-in-law Laura Wallace posted the note on Facebook.

Christel Wallace found this note, written in Chinese, in a handbag she purchased a Walmart.

The inner pocket of a handbag where Christel Wallace found the note written in Chinese.