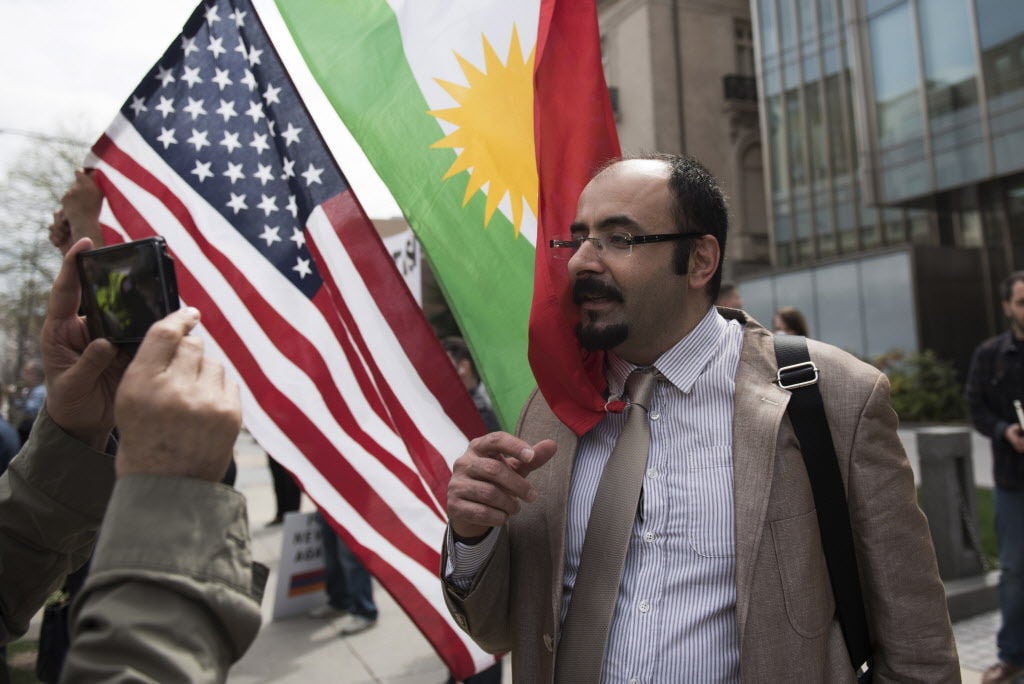 Journalist Emre Uslu, answering questions in front of the Brookings Institution in Washington, was left bloodied by a kick to his leg and could not get by security to attend the speech, although he was on the guest list.

You would think this would be an especially hard time for people from Muslim-majority countries to live in the United States.

There’s the political rhetoric — mainly Donald Trump’s proposal to ban Muslim immigrants or, in the most recent version, to suspend immigration from countries that have exported terrorism.

There are also occasional violent outbursts: the bottles thrown on a Tucson mosque, the killing of a Muslim man in Tulsa, the assassination of an imam in New York City.

But for Turks, that’s not so much the case. For many, now seems a great time to be away from home and in the relative security of the United States.

You probably heard the recent news: On July 15, elements of the Turkish military tried to overthrow the government of elected President Recip Tayyip Erdogan. They failed, almost 300 people were killed in the attempt, and in so doing they unleashed Erdogan’s already autocratic tendencies.

He has purged about 100,000 people, suspected coup-plotters and sympathizers, from the military, government agencies, the universities and other institutions . The government has also accused Fethullah Gulen, who inspired the creation of charter schools in Tucson and around the country, of fomenting the coup from his home in exile in Pennsylvania.

“The purge is, I think, the most scary thing to most people here,” Gokce Gunel told me.

Originally from Istanbul, Gunel is a new assistant professor in the University of Arizona School of Middle Eastern and North African Studies. She was part of a generation of Turkish academics who were encouraged to get doctorates abroad — her anthropology degree is from Cornell University — with the idea that they’d return home and teach there, she said.

That looks unlikely now. She pointed to reports from Scholars at Risk, a New York-based group that helps academics flee places where their work has endangered them.

Clare Robinson of that organization told me it has received more than 120 applications for help from scholars from Turkey since the July 15 attempted coup — “more than we have ever seen for any other country in any other such time frame. These are applications for SAR’s core work providing temporary academic posts to threatened scholars.”

While Gunel pointed out that some newspapers have been shuttered or neutered, some writers have been jailed and scholars purged, the threat is broader than that. Erdogan has not limited himself to targeting people thought to be sympathetic to the Gulen Movement.

“Right now, the purge is not directed at the Gulen organizations per se. It’s directed at anyone who has a critical understanding of Erdogan,” she said.

But of course, the Gulen Movement is a target-rich environment for Erdogan, and the targets are not just in Turkey. The movement is a multifaceted network of businesses, schools, government workers and others who follow Gulen, a religious leader who preaches a form of Islam in harmony with other religions and cultures.

The movement’s followers have started schools all over the world — many in Central Asia, but also in South Africa and the United States, among other places.

Here in Tucson, as I documented in 2010, the Sonoran Science Academy charter schools appear to have been started by followers of Gulen and to be part of a loose, nationwide network of schools. They also hired — and continue to use — many teachers and other professionals brought in from Turkey on H-1B visas.

None of this makes the schools evil or nefarious — they seem to provide a good education without proselytizing and employ a variety of people, not just Turks or followers of Gulen. Nevertheless, recent events make the preacher’s followers and their families, especially those still in Turkey, vulnerable.

Erdogan and Gulen both link their Muslim faiths with their politics and were allies up until about 2012.

Now, Erdogan is certain that Gulen’s followers launched the coup attempt and is bent on eliminating them once and for all from the Turkish state’s apparatus.

“Gulenists are right now, actively and in droves, seeking asylum around the world,” Joshua Hendrick, a sociologist at the University of Loyola Maryland, told me Friday.

“The Gulenists are leaving Turkey in droves to South Africa, the United States, Egypt.”

Hendrick, whom I interviewed years back when first researching that Turkish network, has since published a book, “Gulen: The Ambiguous Politics of Market Islam in Turkey and the World.”

For Muslim Turks in the United States, he said, “The pressure here is relatively mellow. It’s a lot of spectacle, a lot of noise on the television screen.”

Not every Turk in the U.S. is fearful of returning, though. I spoke with Hanifi Kaya, owner of Rugs & More, 2420 N. Campbell Ave., who said he was in Turkey for six months last year. His hometown is in southeastern Turkey, near the border with Syria, where refugees and even a new outburst of warfare are a reality.

“I would live in a Turkey in a heartbeat,” Kaya, who is a U.S. citizen, told me. “If you don’t have a sense of wrongdoing, you will go back.”

Still, in Turkey, the firings are real, the arrests are real, the occasional torture and even sometimes death is real. The threat of getting fired from the government or military is unlikely to be sufficient to win a person asylum or refugee status, though.

I checked around with immigration attorneys in Tucson and have found no great surge here yet. But an attorney in Washington, D.C., who has had Gulen followers as clients, told me he’s had a flurry of clients in recent weeks, thanks to the purges in Turkey.

Jason Dzubow told me he’s done about 10 cases for Gulenists in the last couple of years, but since the coup has had three more people approach him.

The pressure will not end soon.

Erdogan has demanded that the United States extradite Gulen from his home in exile in Pennsylvania to face justice for alleged crimes that preceded the coup in Turkey. The United States, he’s said, need to choose whether it supports Gulen or Turkey.

Turks with a connection over here have an easier choice right now. Between Turkey and places like Tucson in the United States, the easy choice is to get here or stay here if they can.

You may have heard that the sky is falling, but it's not, especially not in Tucson.

With the surge in diabetes, test strips become resale product -- and are stolen, too

Arizona puts too many people in prison, but candidates differ on how far to go.

A simple breakdown of the rigorous and lengthy screening process all refugees must go through before resettling in the United States. Produced…

Journalist Emre Uslu, answering questions in front of the Brookings Institution in Washington, was left bloodied by a kick to his leg and could not get by security to attend the speech, although he was on the guest list. 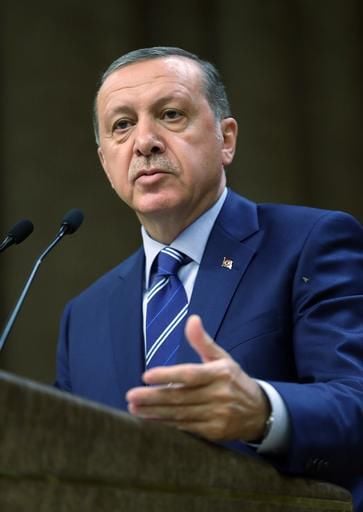