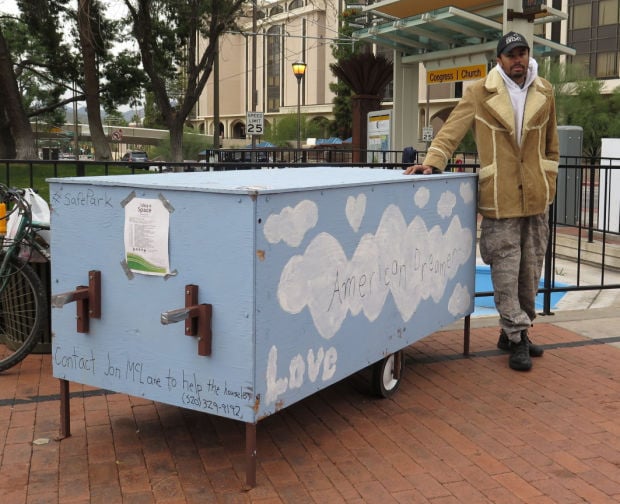 Jon McLane, a Tucson activist, stands in front of his sleeping pod on a sidewalk at a downtown Tucson, Ariz., park on Thursday, Jan. 29, 2015. (AP Photo/Astrid Galvan)

During Jon McLane’s rise as a well-known Tucson activist, some people got left behind — his kids.

McLane has led the astonishing growth of Safe Park, the downtown homeless protest camp, for the last 18 months, but meanwhile he has neglected to pay $394 per month in child support for his two boys, court records and his ex-wife say. The order went into effect on January 29, 2014.

The boys, ages 5 and 6, share a one-bedroom apartment with their mother, Mayra Espinoza, and their 16-year-old brother by another man. I visited them last week and saw the two bunk beds, one against each wall of the bedroom, that allow all four family members to have their own mattress.

“Being a single mom with three kids, with everything depending on me, is really hard,” Espinoza told me last week.

She told me she has been scared to press her case against McLane, 31, but did so recently with the encouragement of Lloyd Bailey, a retired local insurance agent who employed her as a caregiver for his wife. Bailey’s frustration with McLane has grown as he watched the young man’s increasing presence in the local and even national news media.

He was aware not only of the two kids McLane has with Espinoza, but a third child McLane has with another woman. McLane’s homeless status and lack of a job appears throughout the custody case files as reasons he has contributed nothing or needed free legal aid.

“I think he’s an able-bodied man and he should take care of his kids,” Bailey told me.

McLane has been somewhat out of view since his arrest Thursday by Tucson police. They accused him of possessing and selling marijuana, felonies they say were documented by undercover officers in Safe Park. But on Tuesday, McLane attended a hearing of the case that he and his ally John Cooper brought against the city of Tucson over the city’s policies on sidewalk demonstrations.

Afterward, I walked with him and we talked briefly about the child-support issue. He objected to my digging into his family life and said he had taken care to ensure that Espinoza had her U.S. permanent residency and that the children were squared away before embarking on the Safe Park effort in late 2013. He also described his plan for making it all good.

“We’re in a suit for $5.5 million,” McLane said, referring to the lawsuit he and Cooper have against the city. “That’s what we’re claiming in damages. Once this is all said and done, my children will be more than well taken care of.”

McLane and I have known each other for a little over a year, and in March 2014 I moderated a forum on homelessness that he organized. An overflow crowd packed the meeting room in the basement of the main Pima County Library downtown and left the event informed and energized, I thought.

My own parents and family were there and all came away particularly impressed with McLane. The man is a natural communicator, with charisma. No wonder so many people have been drawn to him ever since his days as a leader of the Occupy Tucson movement in 2011.

Yet there’s been a steady undertow as McLane has become the go-to man for interviews about homelessness and poverty in Tucson. Allies such as Michele Ream, who is spearheading an effort to build inexpensive huts for homeless people, and Melissa Hager of The Tribe, an advocacy group for the poor, have stopped working with him.

A common complaint is that McLane, who before becoming an activist worked a number of service-industry jobs and said he served in the Army, has too much ego wrapped up in the Safe Park project, a problem that people like me have fed by seeking him out for interviews. Frankly, I should have known that when the flyer for the forum I moderated featured a dramatic picture of McLane’s face on it.

But there is a steady stream of addicted, mentally ill or just plain out-of-luck homeless people willing to join the movement, just as there were in the Occupy Tucson days. And there is another key ally who has stuck with him — Pastor Dave Ferrari of Central City Assembly of God Church, 939 S. 10th Ave.

McLane and “Pastor Dave,” as he is known, worked together to build huts for homeless people on the church’s property. Ferrari told me Tuesday he sees McLane’s faults and knows about the child support he owes but feels God has given McLane a gift.

“I’ve lost lots of friends and people who won’t associate with me because of my relationship with Jon,” Ferrari told me Tuesday. “I see something in Jon, and I’m willing to fight for that. I’m willing to go into the mud with him and bring him back out.”

But my view is that too many people are intrigued by McLane’s gift — and are feeding the idea that’s what matters in his life — when there are enough skilled people engaged in trying to solve homelessness in Tucson without him. A dose of humility, a steady job and a sense of responsibility is what he could really use.

Consider this comment McLane posted on Facebook Feb. 11: “People always come by and ask me if I know everybody’s name that stays at Safe Park, and my response is of course I do they’re my neighbors, friends and family, and I name them all off.”

Family. McLane has a real family — three real kids who need real assistance. As important as this movement may seem at the moment, it pales in comparison to them.

City gives homeless until Friday to remove structures from sidewalks.

Jon McLane, a Tucson activist, stands in front of his sleeping pod on a sidewalk at a downtown Tucson, Ariz., park on Thursday, Jan. 29, 2015. (AP Photo/Astrid Galvan)