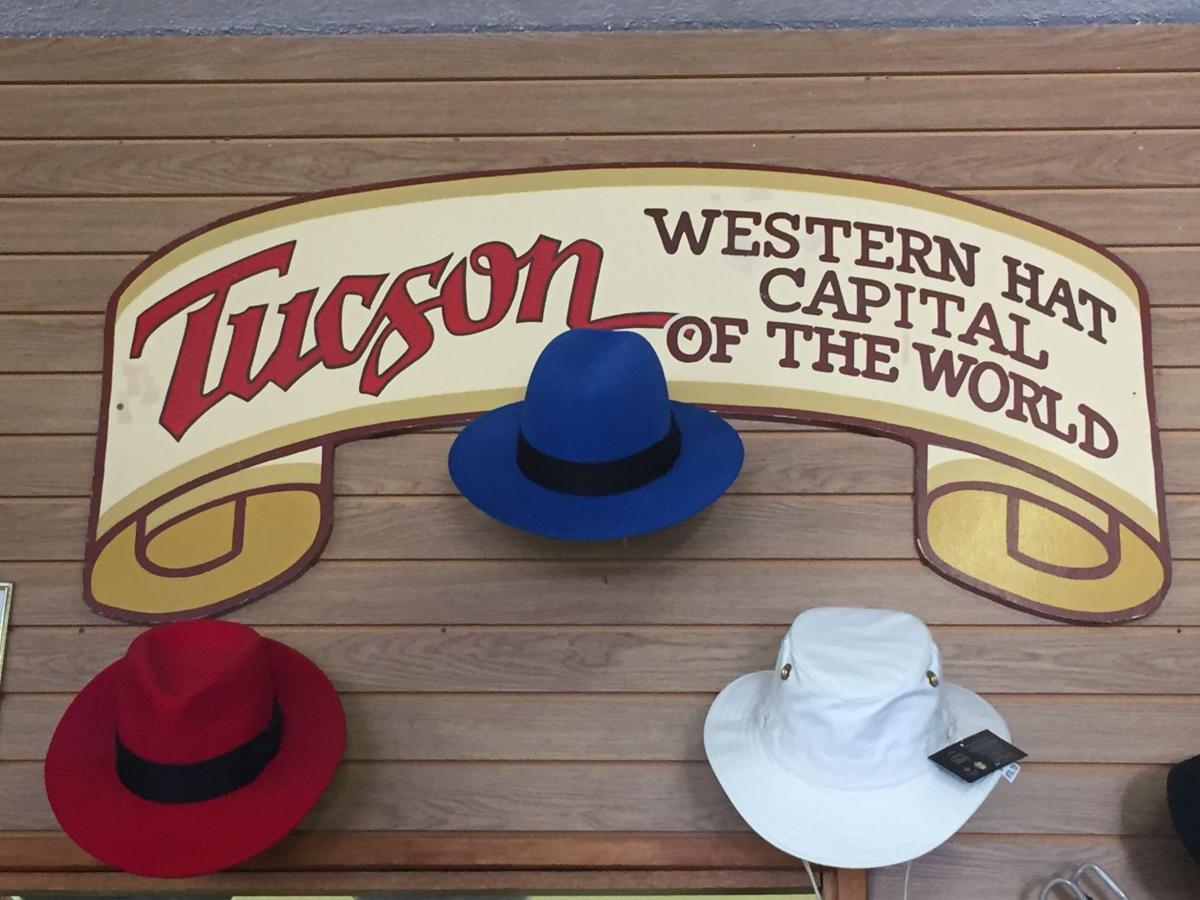 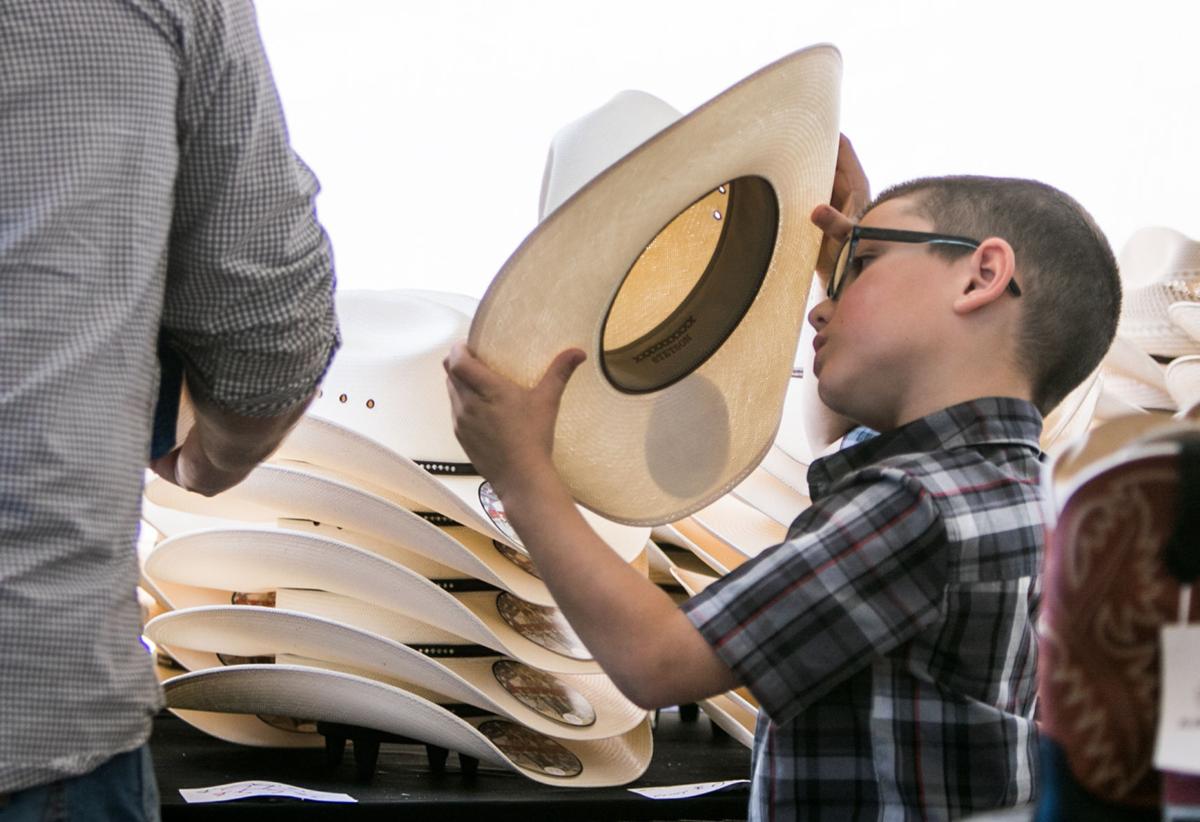 Ryan Luke, 7, checks out a cowboy hat as he shops with his dad, Chris, at the Fiesta De Los Vaqueros Tucson Rodeo on February 20, 2017.

I was walking downtown in a September storm, and the until-then sturdy brim warped and melted in the rain. Funny how long a hat can last around here without its weakness being exposed by a little moisture.

But it was the end of summer — no need for a new hat right then, I figured. (Incorrectly, of course, since the sun is so powerful here most of the year and can bring skin cancer down on you years later.)

When it came time for another new hat in spring 2016, I looked and looked, but finally put it off. I couldn’t trust the $15-$20 hardware-store hats anymore — I’ve also stuck my thumb through a few $15 straw hats — but paying more seemed ridiculous.

Anyway, such an important decision cannot be rushed. So I waited another 60 weeks or so, using a battered cotton fishing hat from Goodwill much of the time, till I finally got my new one earlier this month.

This is something we all ought to do — wear sun hats, not shop 60 weeks for them. There’s no good reason to expose your skin to Tucson’s sun in summer. But be aware that if you want to get the right hat it takes work — arduous, painstaking labor.

First came internet research: at general retailers like Cabela’s, REI, Amazon, Zappo’s — and at hat companies like Tilley, Stetson and Coolibar. I showed the options to family members, friends and colleagues, who were ... tolerant.

My tastes and the options started becoming clear. First, short-brimmed fedoras were out. A good Tucson sun hat needs at least 3 inches of brim, preferably flat or turned down.

Now, on one hand I like Panama hats because they’re light, and their typical dark band gives them a formal touch. But they don’t usually come with chin cords that keep them on in wind. That would violate their style.

On the other hand, there are plenty of hiking-style hats made of newfangled fabric and sporting mesh to aerate the head. These are useful and some of them stand up respectfully instead of flopping, but most of them just don’t look good enough for use in the columnist’s workaday world. Style, my friend.

On the third hand, there are cowboy and other Western-style hats. These are, of course, traditional in Tucson, and I’m happy to see them on Tucsonans’ heads as I move about town. But I’m not from Tucson originally and I can’t help but feel like a cowboy hat would look fake on me. Those hats carry a little too much meaning for me to mess with them.

Having done so much internet research, I shifted into ground operations. My daughter accompanied me as I reconnoitered Miller’s Surplus and Summit Hut. The Miller’s Surplus stock was too camper-oriented. Summit Hut’s supply was mostly too hiker-oriented, but it had a good-looker that was too small, and they said they had a bigger one in their other store. Otherwise it ticked all my boxes: Made of a natural fiber, sporting a colored band, seeming to be breathable and also having a chin cord.

Yes, a chin cord, to keep it on in the wind. Some call it a stampede string. I call it ugly — and necessary, especially in our blustery spring.

When I asked my Facebook friends for their opinions on the chin cord, their responses went like this:

“Let the chin cord dangle behind your head.”

“Chin cords are acceptable during vigorous yard work. While chilling or hanging out, nope.”

“No chin cord. However, ear flaps might be stylish.”

“Just tie it on with a rope, over the top of your hat and tied under your chin. A scarf, if you’re fancy.”

Another ground operation ensued that took me to Arizona Hatters, Target, REI and other stores at Tucson Mall. Arizona Hatters, at 2790 N. Campbell Ave., specializes in Western hats but came very close to satisfying my demands. I tried on a few and sent pictures to my wife, daughter and neighbor. They did not coddle me, though: They pointed out the disappointing downsides of the hats I liked.

I retreated and retrenched. Then Summit Hut called. They did not have the bigger hat of the model I’d admired. So I went online and there it was: A hat called the Charleston from a company called Wallaroo, based in Boulder, Colorado. It is made of “twisted sea grass,” whatever that is, and has a light fabric liner. It also has a detachable chin cord. An inner drawstring allows me to tighten the fit without the cord, which now resides in my work bag.

It was expensive for me at $48, but what the heck — this is a piece of daily Tucson apparel. Now that I’ve done all that research, I can move on ... to building my hat collection.

Mary Sally Matiella, a former high-ranking official in the U.S. Army, is exciting some Democrats.

The bribery indictment of big Phoenix political players should awaken us to systemic legal corruption.

Last week's "false start" brought many of the dangers we associate with the season, but little rain.

Ryan Luke, 7, checks out a cowboy hat as he shops with his dad, Chris, at the Fiesta De Los Vaqueros Tucson Rodeo on February 20, 2017.