Steller: Why doesn't Tucson have permanent gem show spaces yet?
Share this

This time of year, the appeal of the concept is apparent.

Put a string of permanent gem-show exhibition halls along the frontage road on the east side of Interstate 10 from downtown to 22nd Street: one by the federal courthouse, one north of 18th Street, one south of 18th Street.

I walked that route Friday and could imagine the long, low buildings with nice lighting, heating and cooling, big windows and, of course, permanent bathrooms. Instead, for decades we’ve had huge tents put up annually for the shows, dust-and-gravel parking lots, and a rail line so obsolete that mature trees are growing between the tracks.

Don’t expect that to change anytime soon. If it ever happens, it’ll be in Tucson Time.

That’s not for the lack of ideas. The northernmost parcel, west of Granada Avenue and east of Interstate 10, is supposed to have an exhibition hall within a couple of years. And the southernmost, just north of 22nd Street, was scheduled to be finished around now.

“It’s exciting because it sounds like these guys want to build more permanent spaces,” said City Councilwoman Regina Romero, whose ward includes the southern part of this corridor. The annual gem shows, she added, have “brought millions in sales taxes, but the city of Tucson has not seen permanent exhibition space.”

Down at 633 W. 18th St., the director of Sonoran Glass School told me he’s been imagining improvements around him, too, though that school owns its permanent structure.

“All of us are thinking about permanency,” said John-Peter Wilhite, the executive director. “I don’t have anything concrete. We own a piece of property. Where there’s lots of discussion is about where we might go.”

“We,” in this case, is the school and its gem-show neighbors, and where they might go is how their properties might be transformed. The logic of their dreams is natural. The properties there are usable, but not exactly attractive. With new buildings, they could bring in events and rent throughout the year, and perhaps create a new corridor of artists, jewelers and mineral aficionados.

Still, their dreams are proving hard to realize.

The northernmost site should be the first where an exhibition hall actually goes up. That’s Allan Norville’s old property, the one where for years he’s put up giant tents for the GJX show.

The Norville family development company, Nor-Generations LLC, won the right to develop the adjacent property, known as the Arena Site, from the Rio Nuevo district board in 2014. But the company’s first priority has always been to build a permanent exhibition hall.

Unfortunately, that’s not going to happen until 2017 at the earliest. The city of Tucson, the Rio Nuevo district and Nor-Generations are negotiating a complicated deal for redesigning the drainage of the property, attorney Pat Lopez told me.

“We want the agreement approved in the next month or two,” Lopez said. “Then that infrastructure could be constructed immediately.”

The problem is, construction will have to wait. It has to happen in the 11 months or so between gem shows. So that means if the company can get building permits this year, then it will begin construction after the 2017 gem show.

At the next tent to the south, just north of 18th Street and east of the frontage road, the picture is clearer. Danny Duke, who owns the JG&M expo, has no plans to build a permanent building there. When I met Duke at the show Friday, he told me he reckons Rio Nuevo may want the land, which he bought from the city.

He does have dreams of a permanent building, but that would be on property he owns on North Oracle Road. So for now, we’re stuck with the huge metal frame he leaves up all year.

The Sonoran Glass School sits between two gem-show tents, but it’s another geographical feature that Wilhite sees as key to the future of the area. That’s the abandoned El Paso and Southwestern rail line. The city plan is for it to become a car-free “greenway.” When that happens, it could spark changes in the area, he said. But for now, it’s up to the individual owners to push change.

Duke and his gem-show neighbor to the south, Lowell Carhart, have an interesting relationship — in short, they’re competitors. When the city put 6.5 acres of the old El Campo Tire property up for sale, Duke bid, but Carhart won the property.

In 2014, Carhart announced plans to build a 150,000-square-foot, $12-million exhibition hall. It was to be a sort of condo cooperative, with exhibitors buying spaces in the building. It was a good idea, but it didn’t work.

Lots of people were interested, but when it came time to pony up, they didn’t. So now he’s changing the concept to a more-traditional large, two-story exhibition space. Once he gets enough vendors to sign long-term leases, he plans to get financing for construction. How soon that will happen is unclear.

He’s working with neighbors like Wilhite of the glass-art school and vendors here and in Phoenix to drum up support. But it will likely take a few years — if it gets done at all.

That’s the reality of Tucson’s low-budget economy. An exciting idea like a string of gem-show halls from 22nd Street to downtown may make sense geographically and in terms of economic development, but it’s a stretch to get it done.

Plus JTED restoration, Flake on Scalia, and a downtown brewery.

Near-space balloon company's promise doesn't have to be fulfilled for 16 years.

"This is Tucson" hits the gem show.

Irene and Angela try to find sparkly treasures for under $10 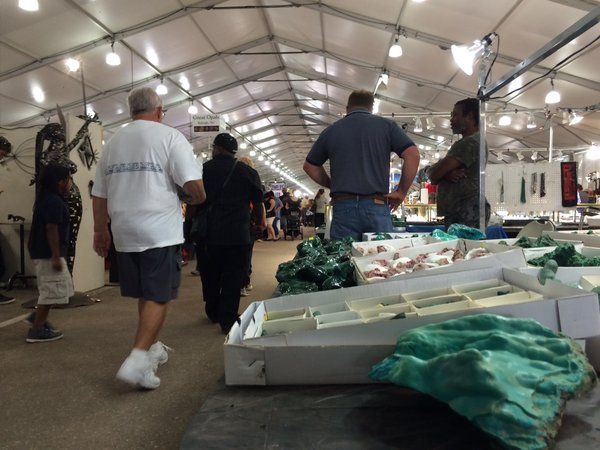