Mary Sally Matiella, Assistant Secretary of the Army, with service members in Iraq in 2010. 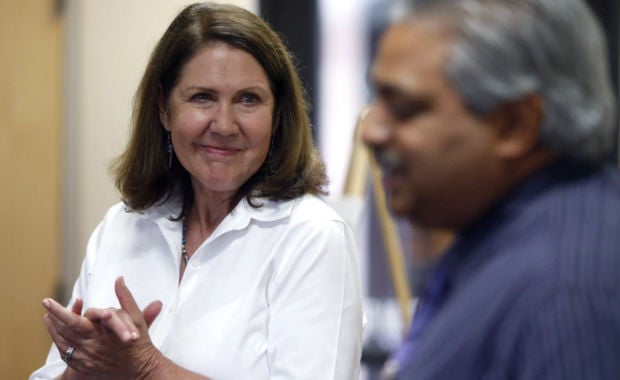 The question is, which woman?

There’s a well-known ex-congresswoman who has said, as I reported last month, that she is considering running in Congressional District 2: Ann Kirkpatrick. She told me she has moved from Flagstaff to Tucson for family reasons and is thinking about running for the nomination in her new home. Then last week, former Rep. Ron Barber sent out an email seeking to draft Kirkpatrick into the race.

“To defeat McSally, we need someone with the moral courage to put ordinary families ahead of party politics. Ann Kirkpatrick is the right person for that job,” Barber wrote. “Please join me in drafting her to run for Congress.”

But for weeks there has also been an experienced woman, new to electoral politics, cultivating support among some of the area’s key Democrats. I met Mary Sally Matiella Wednesday at the home of Bill Roe, a longtime leader among Arizona Democrats who is the party’s first vice chair. In Matiella (pronounced "ma-tee-AY-ya") he seems to think he’s found the challenger to beat McSally.

As she unfolded her story for me, you could see why Roe is excited. Matiella was born Maria Celia Garza in 1951 to migrant farmworkers in Texas, she told me. The family moved around Southern Arizona but settled in Tucson, where she attended public schools on the south side, graduating from Pueblo High. Then, against the odds for that era, she went to the UA and earned not just a bachelor’s degree in education but a master’s in business administration.

After marrying, she moved around with her airman husband, Francisco Matiella, who is from a Nogales family. Gradually she built a career in budget and accounting within Defense Department entities. Over a career in D.C., Germany, Panama and elsewhere, she became a CPA, and got a doctorate in education.

In 2008, she moved back to the Tucson area, where her five siblings live, she said. But then President Obama appointed her to the highest position she held in government: assistant secretary of the Army for financial management and comptroller. She held that job from 2010 to 2014.

Like many Democrats, she expected Hillary Clinton to win the presidency and has been dismayed to see programs she values in education, health and the environment scheduled for drastic cuts in President Trump’s proposed budget.

“I want to make sure these programs get funded, that we continue moving forward,” she said, adding that under Trump, “We are going backward. We are going back to the ‘60s and ‘30s.”

“My knowledge of governance, the federal budget and the give-and-takes makes me well-qualified to understand what we need to do to make sure these programs are not rolled back.”

Of course, one of the simple attacks against Matiella, if she runs, will be that she is just another D.C. bureaucrat. She’s preparing for that criticism and others if she runs. But first, she needs to broaden her support.

Barber, the last Democrat to occupy the CD2 seat, is not on board.

Matiella “is absolutely delightful and she’s got a great history of serving the country,” Barber told me. “I’m concerned, as I am in any race, that we find the candidate who has the best chance to win.”

Barber, Roe and others have been approached by at least two dozen potential Democratic candidates. Of those, the top tier probably consists of these five: Matt Heinz, who lost to McSally in 2016, commercial pilot Jeff Latas, former state legislator Bruce Wheeler, Matiella and Kirkpatrick.

Then there is Charlie Verdin. Having written several times about CD2 candidates but never mentioning him, I was surprised to receive an email from Verdin in which he explained to me he is not a joke candidate. I’d thought he was because his last name is the name of a songbird around here. But no: Verdin, a Tucsonan who co-founded a local company called Fangamer in 2007 and continues to work there, is quite sincere and trying to spread the word he’s running.

Last week I reported on state Sen. Steve Smith’s candidacy for the GOP nomination for U.S. House in CD1. While he is the likely leading contender at the outset, there are at least two other Republicans in the race at this early stage.

Kevin Cavanaugh, of Coolidge, began a run for the Pinal County sheriff’s race in 2016, but he bowed out of that race and gave his support to Mark Lamb, who won. He was deputy chief for a short period under Lamb, and now the former police officer is running as a pro-gun-rights, anti-abortion traditional Republican for the nomination in CD1.

Shawn Redd, who ran for the nomination in 2016, has announced he is a candidate again, as well. Whoever wins will take on Democrat Tom O’Halleran, who won the seat over former Pinal County Sheriff Paul Babeu last year.

One rumored candidate who will not run is T.J. Shope. The state representative from Coolidge considered mounting a campaign but decided to hold off for now, he told me. Instead, he’s planning to stay in the state House and perhaps make a run for speaker.

At first glance, the idea of a CVS pharmacy moving into the Chicago Music Store — reported by my colleague Gabriela Rico this week — looks like a mismatch. How can such a plasticky retail chain be made to fit into such a cool historic spot?

But upon reflection I basically like the idea. The earlier discussion had it that developers would put a new restaurant-bar concept in the building at 130 E. Congress. Frankly that’s not something we need more of downtown right now.

A pharmacy, though? That is something we all could use.

The big condition is that the historic facade must be really, truly preserved. How CVS will do that and also create signage that identifies the store and brings in customers is a puzzle we’ll have to solve — sensitively.

Ann Kirkpatrick to announce run for Congress in District 2

The three-term Congresswoman jumps into a crowded field of Democrats hoping to challenge the incumbent Martha McSally.

Mary Sally Matiella, Assistant Secretary of the Army, with service members in Iraq in 2010.