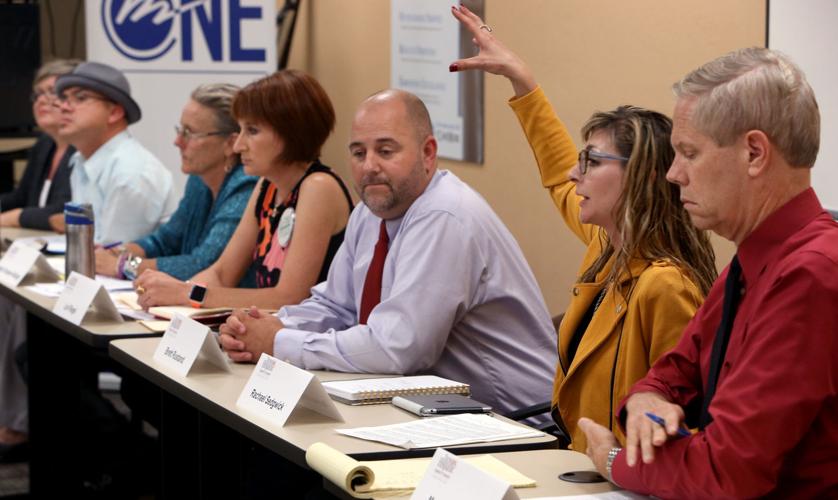 The board was discussing the district’s financial situation and the possibility of moving overcrowded Dietz K-8 school to the closed Carson Middle School building.

Board member Michael Hicks was driving some other board members crazy with his plodding questioning of CFO Karla Soto when she answered one of his questions this way:

“We had audit findings from Prop. 301 monies that the district was not spending those through the course of the year. So those funds were being used to balance the budget at the end of the year.”

In other words, this is an important source of money for teachers, who have been leaving TUSD and other districts in droves.

But over the last four or five years, as Soto explained in presentations made in July and on Tuesday, TUSD has allowed Prop. 301 pay-for-performance money to accumulate in its accounts. As of July, that amount added up to about $18 million.

It’s not unusual for there to be some carryover — it’s impossible for a district to calculate exactly how much it can distribute to teachers and maintain year-to-year. But $18 million is a lot of money — money teachers could have used.

Instead, the district used it to ensure it had positive balances. That’s not right.

Arizona Department of Education spokesman Charles Tack was able to explain to me how the money could be useful to keep a district on firm financial footing.

“They can only issue checks through the county treasurer is if the balance is positive,” he said. A balance of Prop. 301 money, he added, “can help them keep their accounts positive if they have a deficit somewhere else.

That seems to be what happened in TUSD: Using a large amount of carried-over money for teachers to ensure there were no deficits.

I was able to ask Soto about this Thursday afternoon, and she explained that the last time Prop. 301 money was used to balance deficits in the maintenance and operations budget was in the 2014-2015 school year. Since then, she and others have been trying to create realistic projections of how much Prop. 301 will generate before it sunsets in 2020.

“We went back and revisited the salary structure. For us to determine how much teachers are due out of Prop. 301, we needed to figure out a dollar figure per employee,” she said.

So they did that, and they’ve doubled the amount payable to teachers from the pay-for-performance category, to $3,000 each.

That’s a good thing. But it’s also a little late. We’ve lost many teachers, to resignations and retirement, who either deserved a share of that money or might have stayed if it could have boosted their income.

I was unable to reach incumbents Cam Juarez and Kristel Foster, who are running for re-election, but Mark Stegeman, who is also running, said of the year-to-year balances, “Most of it happened under the current administration. It really took off under (current superintendent) HT Sanchez. Whatever part of it is my responsibility, I’m happy to own it.”

Last week, Pima County Sheriff Chris Nanos, a Democrat, appeared with Gov. Doug Ducey, a Republican, to argue against Prop. 205, the initiative to legalize marijuana. It wasn’t that surprising — most law-enforcement figures in Arizona have come out against it.

What is surprising: Nanos is more categorically opposed to legalization than his Republican opponent, Mark Napier.

Nanos told me this initiative is “horribly written,” but also said of legalization in general: “I don’t see how it’s a benefit to society.”

Napier is also opposed to Prop. 205 but said he isn’t categorically opposed to legalization. His big concerns are ensuring that regulations on marketing marijuana, especially candies, are just as stringent as those on alcohol, and that there be a standard for deciding when someone is impaired by marijuana.

In the current state of technology, there’s no way to be sure how recently a person consumed marijuana and what level of THC in the bloodstream constitutes impairment.

“I’d be willing to look at future legislation if that’s the way the voting public wants to go,” he said.

The last governor of Sonora, Guillermo Padres, has long been suspected of corruption — using public money for his own personal benefit. He ended up with fabulous horses, an air-conditioned riding arena, and a new dam built to block a stream and benefit his property, among other things.

But don’t expect Padres, who left office in 2014, to be arrested any time soon. His attorneys have won an “amparo,” a judicial action that prevents the warrant from being carried out — for now.

When they couldn't find enough new customers, they invented fake ones.

In the Pima County sheriff's race and others, these exchanges of ideas and barbs are disappearing.

Political Notebook: TUSD board battle is a race gone wild

The school district places an ad, and a campaign committee turns controversial

In Tucson, more methadone clinics are planned as the market for addiction treatment grows

Existing dispensaries and grow operations are favored in the text of marijuana legalization initiative.

Tim Steller: Here's the subject I can't write about

On April 5, Alma Carmona-Alday was appointed to serve as the principal of C.E. Rose K-8 for the upcoming school year. She is currently an assi…

It's time to change the board.

They want him to spend all the new money for education on salaries.