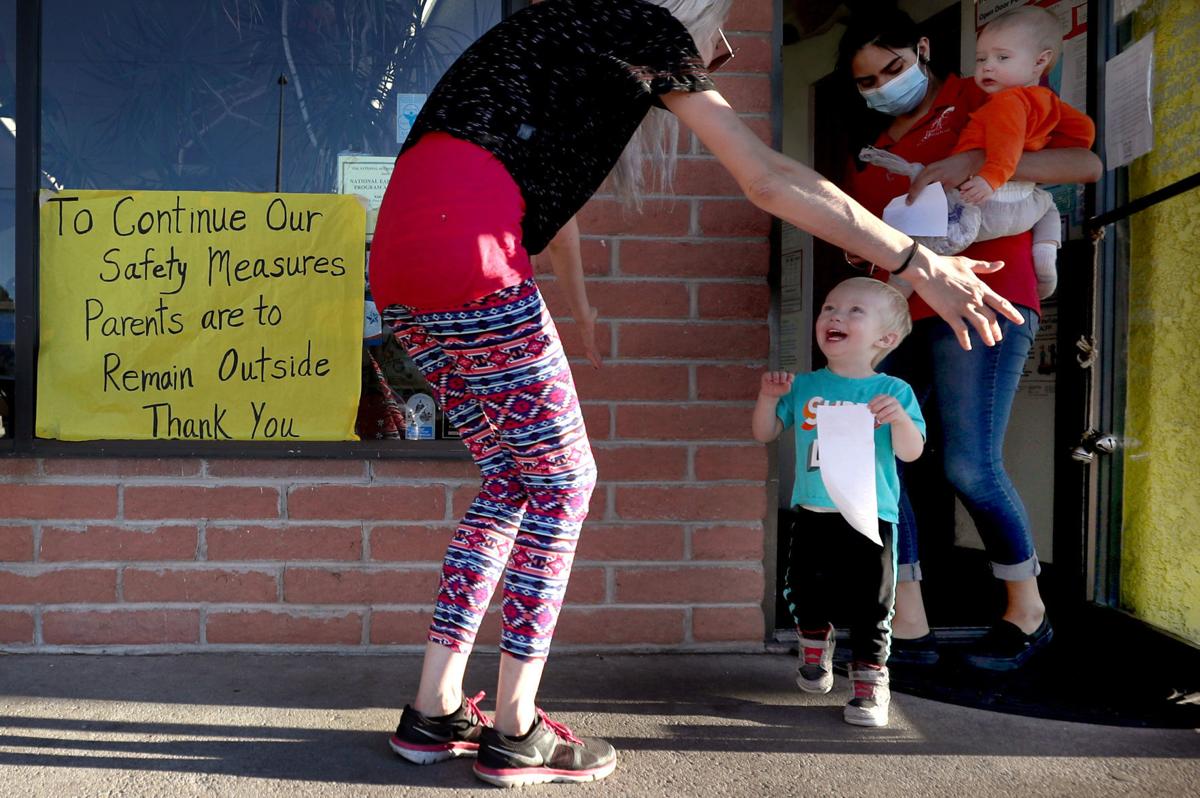 Rachel Huante greets her son Zeddicus Atherton and his little sister Xena Atherton as they trot out the door, part of the procedure of no parents inside the Kids First Preschool. 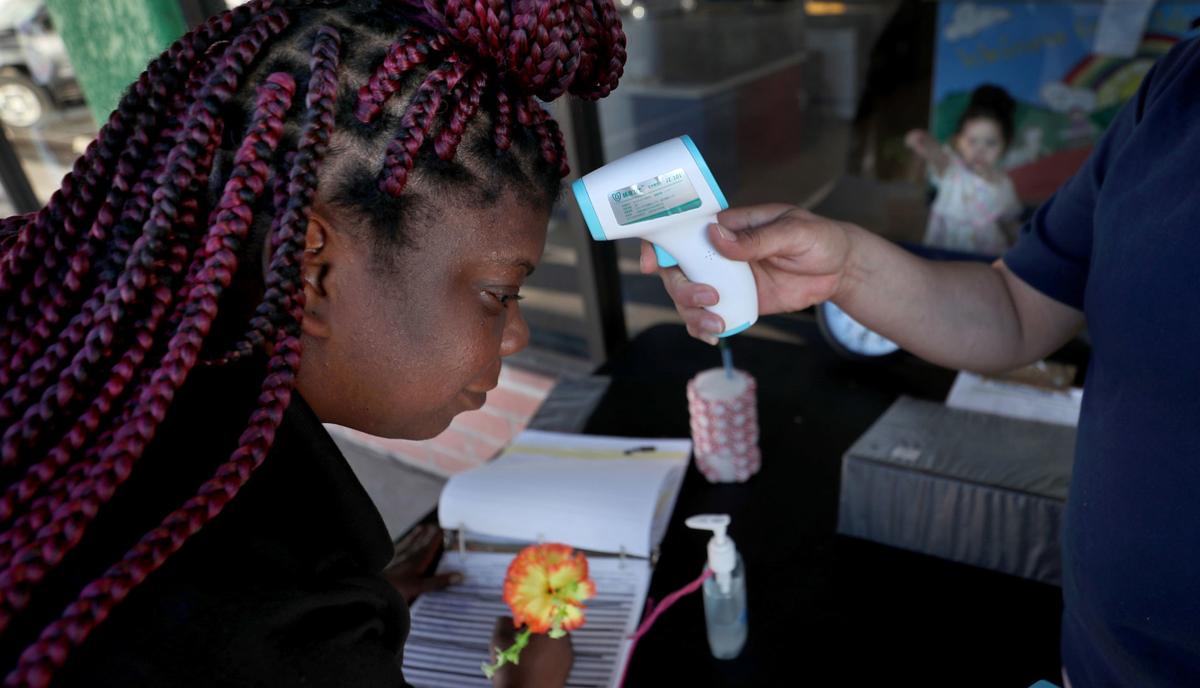 Krystal Patterson gets her temperature taken while signing out her daughter Kejanae Peters and niece Everly Hasentab. It is one of some new procedures at Kids First Preschool.

Herencia Guadalupana Lab School opened as a tiny operation in June 2014, building up to an enrollment of more than 80 young children this year. Then the coronavirus crisis arrived.

“When this hit, it was the most exciting time,” said the preschool’s owner, Ernestina Fuentes, whose passion is helping impoverished children succeed. “In January and February, we were at capacity for the first time.”

That number quickly dropped from 84 children to five, and the school closed.

The COVID-19 pandemic has upended many Pima County preschools and child-care centers, with teachers either out of work or tending to families at high risk of infection while providers who closed wonder if they’ll ever open again.

Statewide, 1,256 schools and centers for young children have closed. That’s nearly half of all Arizona’s licensed providers of early childhood care and education, including public and private preschools, Head Start facilities, in-home providers and child-care centers.

The hardships interrupted some positive changes for Arizona’s working poor families this year, when the state suspended its child-care waiting list after receiving $112 million in federal funds last July. For years leading up to that, many providers had been turning away families that qualified for state assistance because of low reimbursement rates, which hadn’t increased in 18 years.

Gov. Doug Ducey and the state’s Department of Economic Security have made several changes in recent weeks to help providers now hurting from the global health crisis, including continuing state reimbursements even if a center is closed or a qualifying child is not attending.

Ducey’s executive order mandates paying providers whatever reimbursements they were receiving in January, and raises half-day payments to full-day payments.

The changes are part of the federal $2 trillion Coronavirus Aid, Relief, and Economic Security (CARES) Act, which allocated $3.5 billion to the existing Child Care and Development Block Grant. Out of that, Arizona received $88 million.

In addition to continuing reimbursements for providers, Ducey has used the CARES Act funding for Arizona Enrichment Centers, where health-care workers, first responders and other essential employees receive free child care at existing preschools and centers.

As of Thursday, after a week of offering this service, 347 providers had signed up statewide and just under 3,000 children were enrolled.

One of those providers is Jeff Paye, owner of Tucson’s Kids First Preschool, 5613 E. Pima St. Typically, the school enrolls 177 children and has a waiting list, but right now about half that number of kids are attending.

Paye, who opened the school with his wife, Pamela, in 2003, said they have made several changes to help keep the children, their families and the school’s employees safe, including temperature checks at drop-off and pickup, and not allowing parents in the building.

They are also not accepting new children unless they are from a first-responder, health-care or essential-worker family, he said.

Paye, who applied in time to secure a federal Paycheck Protection Program loan, said the school is guaranteeing staff workers 35 hours a week in payment regardless of how much they are working and will push that amount up to 40 hours once the PPP loan arrives.

That federal relief offering is no longer available after the funds, $349 billion, ran out last week. The loans are forgivable for those who utilize the money during the crisis.

“A lot of problems”

At the time the COVID-19 crisis hit Arizona in March, preschools and child-care centers that receive state subsidies were being polled to see how they were doing with the funding increase from last July.

It was a critical process, after Arizona’s families lost 788 providers of subsidized child care between January 2016 and July 31, 2018, including 369 centers and group homes ending their state contracts.

Now, with the current health crisis, it’s unclear how early childhood care in Arizona will look in the months ahead and how people returning to work — especially Arizona’s working-poor families — might access care for their children.

Some of the providers who answered the poll said they could not withstand a closure for more than two weeks without getting outside financial support, said Kelley Murphy, director of Early Childhood Policy with the Arizona Children’s Action Alliance.

Some have been able to get federal PPP loans secured, she said, but others were unable to do so before the funding ran out.

“There were a lot of problems with that particular program in terms of who could apply and who couldn’t,” Murphy said. “Some providers were able to get in but many were not.”

Larger providers that were part of an established network fared better than small mom-and-pop organizations, she said.

The facilities that get 80% to 90% of their payments from DES or Quality First scholarships are faring best, said Barbie Prinster, director of the Arizona Early Childhood Education Association.

“My worry is for those private providers who don’t have any DES contracts, or maybe they have only five or six kids,” she said. “Those are the ones we’re seeing shut their doors and not being sure if they are going to open up again.”

“A lot of us are scrambling”

Amy Baum, director of Northminster Christian School, said the school decided to close after taking a poll and realizing only a few of their families would still be sending their kids.

“Unfortunately, in the early child-care community, a lot of us are scrambling,” said Baum, who started a coalition of local preschool directors so they could support one another through this time. “It’s a very siloed situation for most centers.”

She said the schools that are open are nowhere near capacity right now.

“The demand is just not there,” she said. “Parents are keeping their kids home unless it’s absolutely necessary.”

Baum said Northminster Christian School is fortunate because it is affiliated with the church, at 2450 E. Fort Lowell Road, and that has offered financial security others lack.

“We have not been docked anything at this point,” she said. “We’re lucky ones in this situation.”

Many schools and centers might not be so fortunate, depending on how long the crisis continues.

The National Association for the Education of Young Children estimates that 40% to 60% of the early childhood providers nationwide are not going be around after the health crisis passes.

LaVonne Douville, senior vice president of community development for the United Way of Tucson and Southern Arizona, said the United Way is reaching out to providers here to offer what support it can.

Fuentes, who has her doctorate in education from Harvard University, helps preschoolers who are living in poverty and would not otherwise have access to a quality preschool experience. About 85% of the children at her school receive DES funding to attend.

They are the ones she’s focused on as she dreams of reopening.

If you are a health care worker, first responder or essential worker in need of child care, visit Arizona Enrichment Centers at  arizonaenrichmentcenters.az.gov

If you are a provider of child care receiving state subsidies and you want to learn more about what's available, visit des.az.gov/services/child-and-family/child-care

There have been 184 known deaths related to coronavirus across Arizona, 56 of them in Pima County.

Tucson moves some homeless into hotels to decrease coronavirus spread

One hotel has 200 rooms, the other has 115 rooms to house homeless people who either are at risk of getting the virus or are showing symptoms or have tested positive.

The event will include panels with researchers and with former biospherians Jane Poynter and Taber MacCallum.

Loans of up to $25,000 are available to businesses with 50 or fewer employees.

TEP home customers will get $13 off their bills and electric and gas customers of sister utility UniSource will also credits to help them amid the pandemic.

Less than one third of the state's preschools and centers are open, due in part to little demand from parents during the pandemic

Rachel Huante greets her son Zeddicus Atherton and his little sister Xena Atherton as they trot out the door, part of the procedure of no parents inside the Kids First Preschool.

Krystal Patterson gets her temperature taken while signing out her daughter Kejanae Peters and niece Everly Hasentab. It is one of some new procedures at Kids First Preschool.