Baxter Black probably would have found the humor in dying, too.

The large-animal veterinarian turned cowboy poet attracted a worldwide following with his hilarious, homespun insights on everything from presidential politics to the prolapse of a cow (maybe don’t Google that one).

The Bard of Benson died June 10 at his home in Cochise County. He was 77.

“I don’t think there will ever be another Baxter Black,” said Marsha Short, long-time executive director of the International Western Music Association. “That hole will never be filled.”

With his lanky frame and trademark boomerang-shaped mustache, Black seemed right at home in a saddle or on set next to Johnny Carson.

His poems, songs and countrified commentary appealed to real ranchers and wannabe wranglers alike. And Short said he made you feel like part of the gang, whether you met him in a rodeo arena or only knew his voice from his years as a contributor to “Morning Edition” on National Public Radio.

“The thing about Baxter was everybody knew him personally,” she said. “It was always like getting a mini performance whenever you talked to Baxter Black.”

From vet to poet

Black was born Jan. 10, 1945, at the Brooklyn Naval Hospital in New York City but grew up in Las Cruces, New Mexico, where he headed up his high school’s chapter of the Future Farmers of America and started riding bulls to meet girls.

He attended college at New Mexico State University and earned his veterinary degree from Colorado State University in 1969. He spent the next 13 years doctoring livestock and building a reputation as a storyteller and public speaker.

Folklorist Hal Cannon first met Black almost 40 years ago, while helping to organize the first of what would become the annual National Cowboy Poetry Gathering at the Western Folklife Center in Elko, Nevada.

“At the time, he was the only professional cowboy poet out there,” Cannon said. “He was just out there doing it.”

The two became friends and stayed that way.

When Black made the first of his seven appearances on “The Tonight Show” in 1986, Cannon was there with him, hiding behind a curtain on stage just in case his buddy forgot a line and needed a prompt.

Though Black got famous, he never acted that way, Cannon said. He sold more than a million books, but he still liked to ride and rope. He still ran some cattle on the patch of desert where he and his wife, Cindy Lou, settled at the edge of Benson.

“There was no separation between Baxter on the stage and Baxter at the bar or at the restaurant over dinner,” Cannon said. “He was always just Baxter.”

And his gaze rarely strayed from the land or the people working it.

In the bio on Black’s website, he cited his audience as his inspiration.

“Every cowboy, rancher, vet, farmer, feed salesman, ag teacher, cowman and rodeo hand has a story to tell, and they tell it to me. I Baxterize it and tell it back to ‘em!” he wrote. “It doesn’t seem fair, does it?”

Cannon said most people will probably remember Black as a “very fine humorist,” with a sharp wit that drew comparisons to Will Rogers and Mark Twain. And who wouldn’t want to be thought of alongside such legends? “That’s pretty high cotton, as they say,” he said.

But what Cannon will remember is “a man with an immense heart.”

One of his favorite examples of that is a story Black shared on NPR in 2009 for a regular segment Cannon and the Western Folklife Center produced called “What’s in a Song?”

Black chose to talk about “Little Joe, The Wrangler,” a somber Western ballad his dad used to sing to him and his brother at bedtime.

“Somehow it was important enough that that was the song that he chose to sing to us,” Black recalled. “It’s a story that has a sad ending, but it has a legitimate hero. And any kid can identify with it — ‘I could have done that!’”

In 2012, Nabhan was part of a panel discussion at the festival with borderlands anthropologist Tom Sheridan and folklorist Jim Griffith, and the three of them ended up on the same flight home from Nevada with Black. He said they laughed the whole way back to Tucson.

“He was a changeling, a charmer and a healer — making many of us laugh so hard that we wet our dungarees,” Nabhan said.

There is a classic poem by Wallace McRae called “Reincarnation,” about a cowboy who dies, gets buried and comes back as a wildflower, only to be eaten by a horse and passed out the other end. Nabhan said he remembers hearing Black recite the poem once, and he couldn’t help but think of it when he heard the news about his death.

“I realized that he is on his way to becoming one of America’s best loved road apples, put out to pasture near Benson, Arizona,” Nabhan said.

Short said she first met Black about a decade ago, when he accepted an invitation to perform at the International Western Music Association’s convention in Albuquerque. The organization, once based in Tucson, supports the preservation of the traditional and contemporary music and poetry of the West, so landing a celebrity like Black was a big deal.

His appearance was supposed to be a one-night thing, but he wound up spending the next two days at the convention. Short said excited members kept coming up to her and saying, “I just had the most delightful conversation with Baxter Black.”

Black had a reputation for turning down awards and politely refusing membership in a whole host of organizations, but one day in 2017 Short said she received a note and check from him out of the blue. He said he wanted to become a patron of the association because he liked what they were doing to keep Western traditions alive.

“He especially loved to talk to other poets. He loved to give them help and encouragement,” she said. “He was so at home with everybody. It’s really hard to think of a world without Baxter Black.”

Cannon said he knew his friend was having health problems, but they never really talked about it during their weekly phone conversations over the past few months. “I think he liked that we never talked about that,” he said.

Cannon said Black was very spiritual — a religious man of “simple faith,” who never tried to force anything on you. There are a lot of people everywhere who are going to miss him, especially his wife, their two kids, Jennifer and Guy, and many others in the small Arizona town where the Blacks made their home.

“I know he leaves behind a real community in Benson,” Cannon said.

Black quit performing a few years ago, but he continued to write and record radio segments from his home studio and office.

He had a weekly radio show called “Baxter Black on Monday” that aired on more than 175 stations, mostly in rural parts of the U.S. and Canada. More than 60 far-flung stations in Texas — and one in Scotland — carried the show.

His weekly syndicated column, “On the Edge of Common Sense,” appeared in more than 100 publications across North America, mostly small town papers and ag journals aimed at ranchers and farmers.

Late last year, Cindy Lou Black announced on his website that her husband’s failing health had finally “put him in the retirement bracket.”

His final column, published in December, was exactly what you’d expect: a celebration of “a life where a horse matters.”

“When you can’t do the job alone; a cow in the bog, a race against time, a boulder to move, a detour to take, a mountain to cross, a crevice to leap, a war to win, a sweetheart to impress, or ... when you’ve gone too far to walk back,” he wrote.

“I count myself very lucky that I get to be a part of the wonderful world of horse sweat, soft noses, close calls and twilight on the trail.”

You can stand in the canyon’s cathedral

Where water and sky never rest

And you know in your bones that the meek, on their own

Will never inherit the West

And heaven for a cowboy is just what you might expect,

And a satisfying reason to get up every day.

And if you think about it, you can see it in your mind.

Him, leanin’ in the saddle with his ol’ hat on his head,

Contentment set upon his face like blankets on a bed.

The leather creaks a little as he shifts there in the seat.

The bit chains give a jingle when his pony switches feet.

A’gazin’ out on paradise just like it was his own.

Paul Clinco, a long-time Tucson doctor better known for his wide variety of eccentric, artistic pursuits, has died at age 74.

His doctors told him to let the sunshine in, so school crossing guard Vernon Williams is trying to make his midtown corner the friendliest in Tucson.

There's more to that monsoon smell than meets the nose

A new paper tries to break down the smell of summer rain in the Sonoran Desert.

Snakes, frogs and science students had a friend in Schwalbe

Cecil Schwalbe, 80, was Arizona's first state herpetologist and a career scientist and educator, dedicated to the study and conservation of reptiles and amphibians.

For Star subscribers: The bells that have rung out over the mission near Tucson for more than 200 years were recently taken down and treated in hopes of keeping them ringing for decades to come.

Law enforcement leaders from the Pima Regional Critical Incident Team spoke about the importance of collaboration and communication when it comes to responding to active shooter incidents in schools.

As our summer storms start back up, officials hope the wrecked Nissan pickup pulled from the Cañada del Oro on Thursday will serve as a warning: "This is what happens to vehicles when people try to drive through flooded washes."

Tucson travel writer reflects on his journey in new memoir

Known for his expeditions across the world, this famed Tucson author is now reflecting on his life in a new book as Parkinson's has limited his mobility.

Tucson Water and its artist-in-residence have released a "Monsoon Mixtape" by local musicians that features — and celebrates — the sounds of our summer storms.

For Star subscribers: Residents and researchers are learning a lot as they follow a GPS-collared bobcat and her kittens through a gated community on the west side of Tucson.

A year on this 'hell planet' only lasts 17.5 hours

A year on this 'hell planet' only lasts 17.5 hours 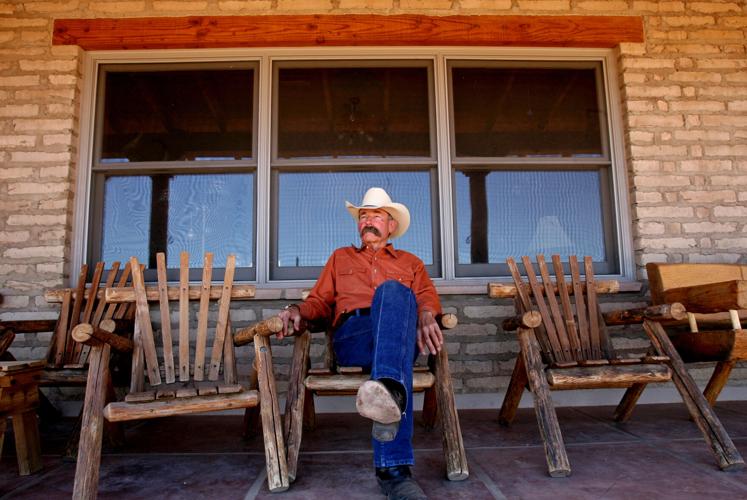 Baxter Black sits on his back patio in 2007, where he said he usually ended up in the evenings watching the sunset. Black, a cowboy poet and humorist, died Friday at his home in Benson at age 77. 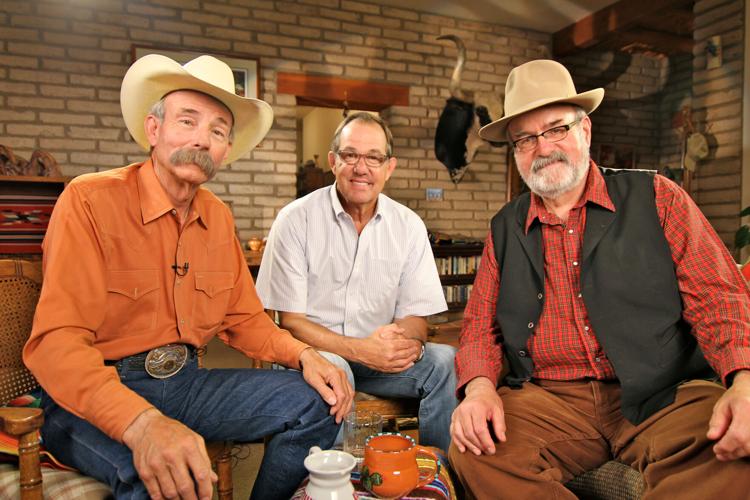