The Bighorn Fire continued to grow Thursday, threatening approximately 850 homes around Oro Valley and the Catalina Foothills — a level of destruction that would constitute a major disaster, the federal government said.

The blaze, which has burned more than 4,700 acres, forced local authorities to issue mandatory evacuations for about 200 residences, sending Pima County Sheriff's deputies door to door in a Catalina Foothills neighborhood.

The Pima County Office of Emergency Management and the Pima County Sheriff's Department issued the evacuation order shortly after 10 a.m. Thursday for the northern-most homes in the area between Alvernon Way and First Avenue, north of Ina Road.

Deputy James Allerton, spokesman for the sheriff's office, said the people in that area are being told to leave immediately, as fire crews set back-burns to clear away vegetation between them and the advancing blaze.

Authorities also expanded the so-called "set" area, where residents are urged to voluntarily leave or be prepared to evacuate if conditions change. That area now extends north of Ina from First to Alvernon and north of the Skyline Road alignment from Alvernon east to Sabino Canyon Road.

Parts of Oro Valley, including all areas east of Oracle Road from north of Magee to Catalina State Park, were previously placed in the "set" stage.

FEMA has authorized federal funds to help the state battle the Bighorn Fire.

The grant provides federal funding for up to 75% of eligible firefighting costs, including expenses for field camps, equipment use, materials, supplies and mobilization, and demobilization activities.

The Bighorn Fire was sparked by lightning on Friday, June 5. Since then, crews have managed to contain about 10% of the blaze, mostly along its southwestern flank, closest to the ignition point near Pusch Ridge, said Adam Jarrold, spokesman for the multi-agency team fighting the fire.

No structures had been lost as of noon Thursday, but the fire continued to burn out of control in Pima and Finger Rock Canyons and along the ridgeline above a growing swath of the Catalina Foothills.

Jarrold said the terrain is too steep to safely send in ground crews, so the fire was largely being attacked from above.

With a forecasted high well above 100 degrees and low humidity, conditions are not expected to immediately improve.

"In this particular situation, weather and topography are not our friend," Jarrold said.

Allerton didn't know how many homes had been evacuated or when or whether more people might get the "go" order.

A cooling shelter for evacuees was set up at Canyon del Oro High School, 25 W. Calle Concordia, in Oro Valley.

For anyone worried about leaving their property unattended, Allerton said, deputies would continue to patrol the evacuation zone.

"We will be maintaining a presence in the area as much as we can," he said.

Not everyone was heeding the evacuation order.

A man who refused to give his name said his home near Finger Rock Canyon is just inside the evacuation zone announced late Thursday morning, but he wasn't about to let the government tell him what to do.

The man said he thought fire crews missed a chance to keep the fire from spreading to the north side of the range.

"With the stuff they're doing now," he said, motioning to the air tankers circling overhead, "they could have stopped it four days ago."

More than 200 people were fighting the fire as of Thursday morning, and additional personnel were slated to arrive later in the day.

A Type 1 management team has assumed command of firefighting efforts. The team has more resources available to it and is typically assigned to complex firefighting situations, according to officials.

Fire crews from outside the Southwest may soon be arriving to help battle the fire.

The federal wildfire control system has designated the Arizona-New Mexico area, including the Bighorn Fire, as one of the nation’s top two firefighting priorities and has issued a call for firefighters from other states to join the efforts.

“As of today, the Southwest is one of the nation’s top two priorities for allocating firefighting resources,” Cindy Wolfe, a spokeswoman for the Bighorn Fire, said Wednesday. The other high priority area is in Alaska, she said.

The Tucson area fire has been “competing for resources,” with more than a dozen other wildfires in Arizona and New Mexico, Wolfe said.

Catalina State Park is closed and trails in the area can be closed without notice because of the fire activity, officials said.

Children, older people and those with heart or lung issues are urged to stay indoors if they smell smoke.

Meanwhile, the bighorn sheep for whom the fire is named seem to be taking it in stride so far, said Mark Hart, a spokesman for Arizona Game and Fish Department. The sheep were reintroduced by the department to the Pusch Ridge area several years ago.

Hart said the sheep are excellent climbers, well-equipped to escape quickly if threatened. No sheep deaths have been reported, he said.

Fire crews working blaze at landfill on Tucson's east side

Fire crews are currently at the facility near Speedway and Kolb.

The number of confirmed coronavirus cases across Arizona is 31,264, the Arizona Department of Health Services said. 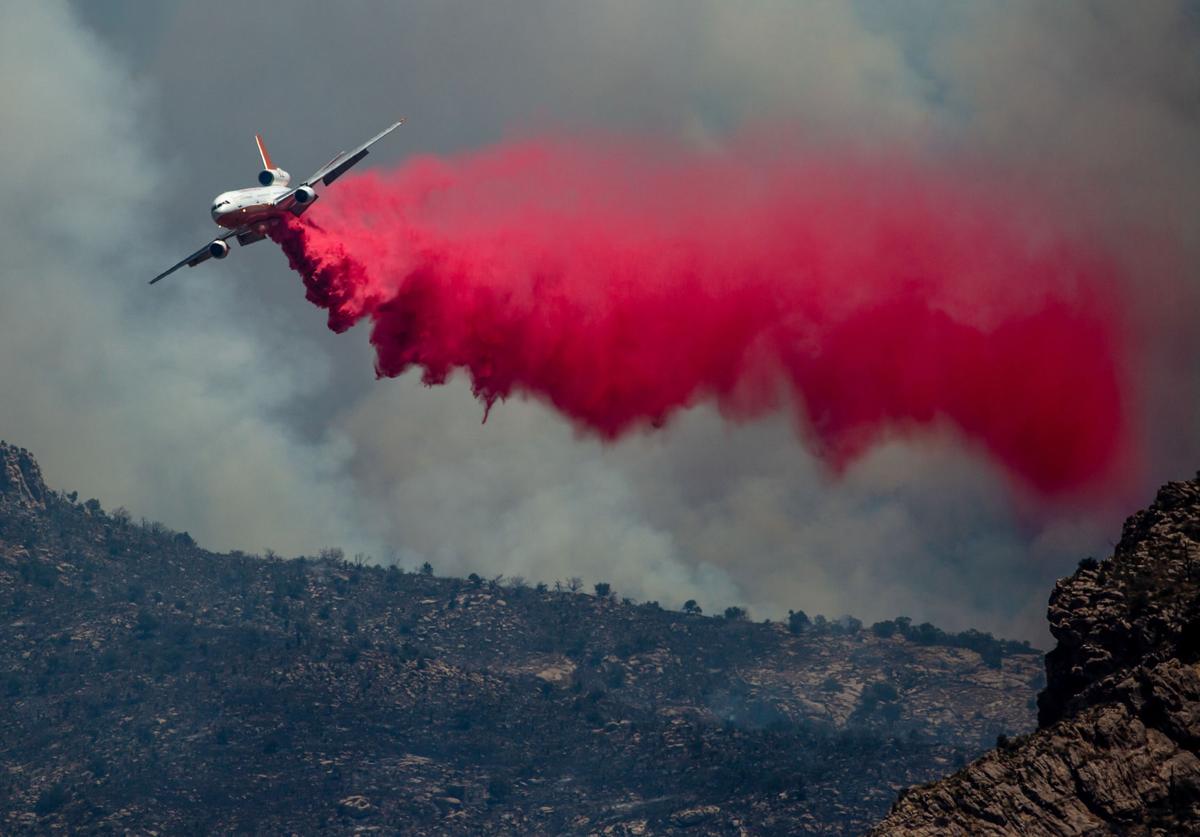 A jet tanker drops retardant as it flies through Pontatoc Canyon as wildfire crews continue to fight the Bighorn Fire which has spread along the western side of the Santa Catalinas, on June 11, 2020. 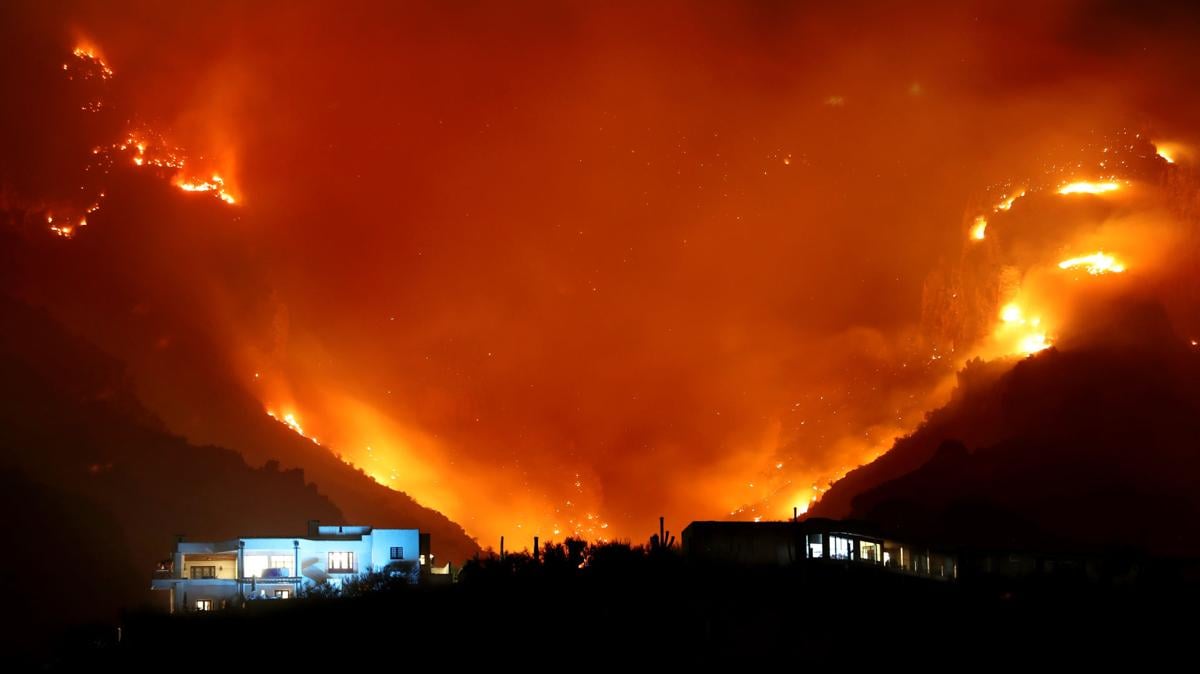 The Bighorn Fire breaks onto the southern slopes of the Santa Catalina Mountains and burns above  a pair of homes in the foothills just west of the Finger Rock Trailhead, Tucson, Ariz., June 10, 2020. 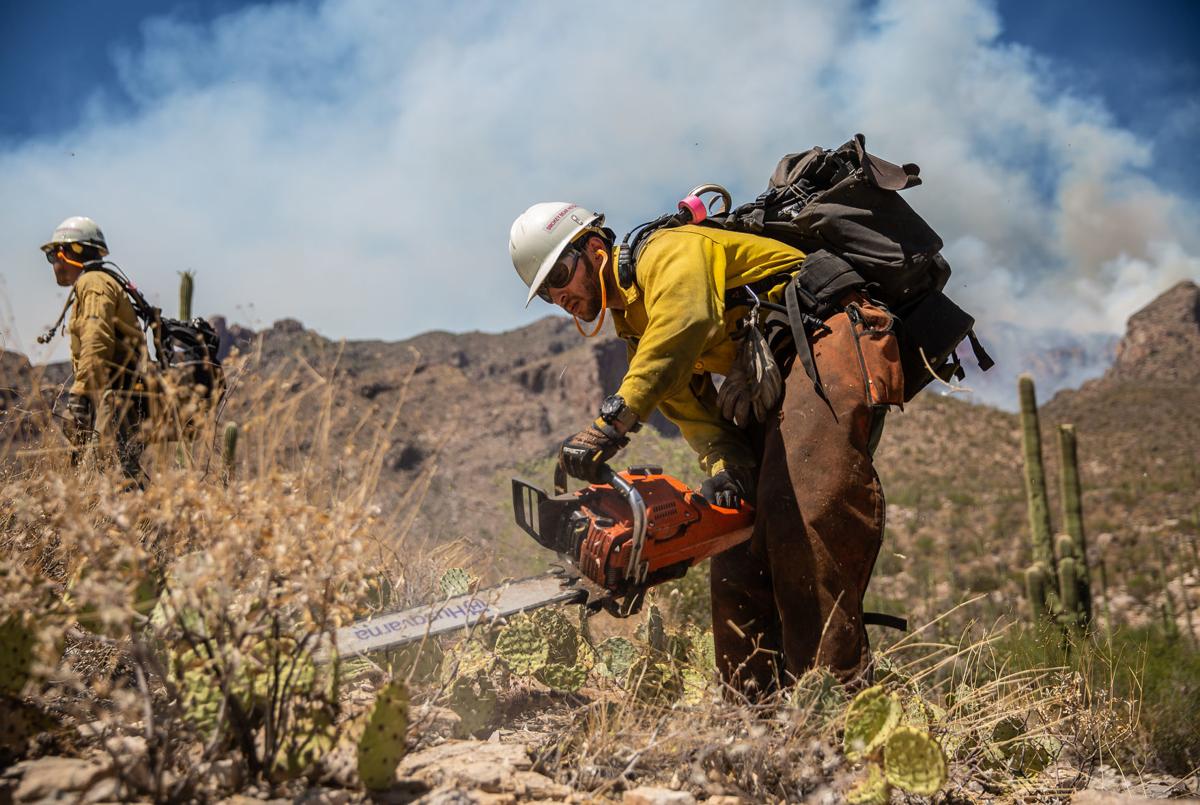 A letter writer deems the hotshot crews, firefighting units and pilots dropping water and retardant “heroic” for their work in trying to tame the Bighorn Fire in the Catalina Mountains.