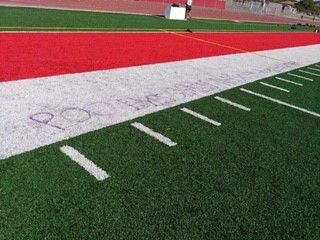 The Tucson Unified School District is asking that anyone with information about the vandalism incident report it to Tucson police or the district’s school safety department. 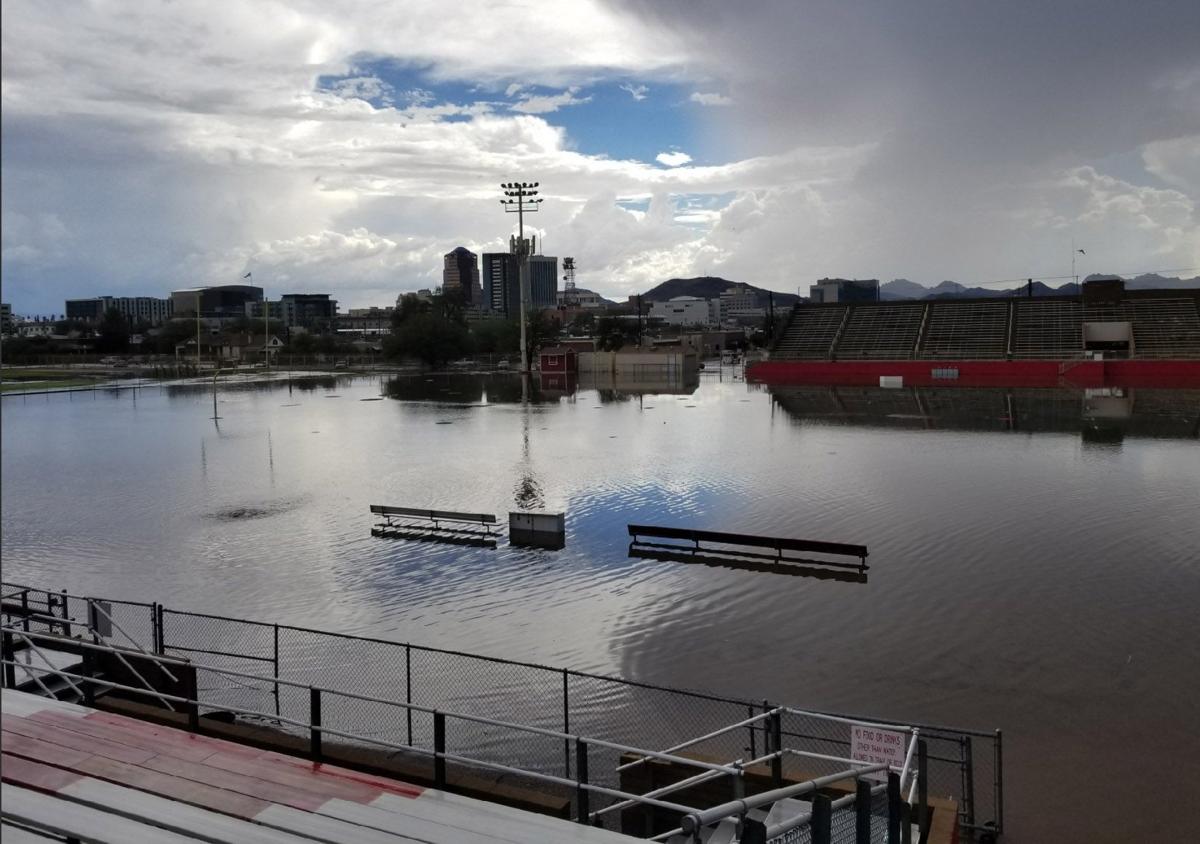 The original artificial surface at Tucson High’s Gridley Stadium had to be replaced following a rainstorm in July 2017 that flooded and damaged the turf.

The Tucson Unified School District shared an image that showed writing on the sideline of the artificial turf field.

TUSD reported the incident to the district’s school safety department and to the Tucson Police Department.

“This criminal activity harms the school, the students and the community,” the district said in a press release.

The school was forced to temporarily close Gridley Stadium in July 2017 after severe flooding from a monsoon storm transformed the field into “Gridley Lake.”

Tucson High football coach Justin Argraves said in 2018 that the renovation cost about $700,000.

Anyone with information about the vandalism is asked to contact the Tucson Police Department’s nonemergency line, 791-4444, or TUSD School Safety, 584-7680.

The decision to split the board presidency into six-month terms was made to show the community wasn't divided into alliances. However, the mid-year election wasn't without controversy.

Badgers will take on Pueblo Friday night at the remodeled Gridley Stadium.

Gov. Doug Ducey and the Arizona legislature have touted their decision to invest $528 million into the state’s public education system next fiscal year as a win for educators and students.

But local school district leaders say the budget — though better than what they have had to work with in recent years — still deeply undercuts the urgent needs and issues facing Arizona’s public schools.

The former manager, Tyler Jeffrey Buntrock, has been accused of receiving money from JTED parents and students, recording the money in the district’s accounting system and depositing that money at the bank, a press release from Attorney General Mark Brnovich said.

The mural, located on a wall across the street from Changemaker in the Naylor neighborhood, was defaced with swastikas, “phallic symbols” and anti-semitic and misogynistic phrases, according to school CEO Luis A. Perales. Tucson Police Department is investigating the vandalism because it involves hate speech, Perales said.

Despite the changes, three Tucson-area high schools were named among the 50 best high schools in the country.

Three people were arrested in Sierra Vista Monday in connection to meth sales out of a motel, officials said.

Ahead of the Fourth of July, when many pets become frightened by holiday fireworks and run away from their homes, the Pima Animal Care Center …

A Tucson man pleaded guilty to two counts of first-degree murder on June 10 for killing his wife and daughter last year, according to court of…

A Tucson man pleaded guilty to second-degree murder in connection with a fatal shooting that left his estranged wife's brother dead in 2017, a…

The Tucson Unified School District is asking that anyone with information about the vandalism incident report it to Tucson police or the district’s school safety department.

The original artificial surface at Tucson High’s Gridley Stadium had to be replaced following a rainstorm in July 2017 that flooded and damaged the turf.