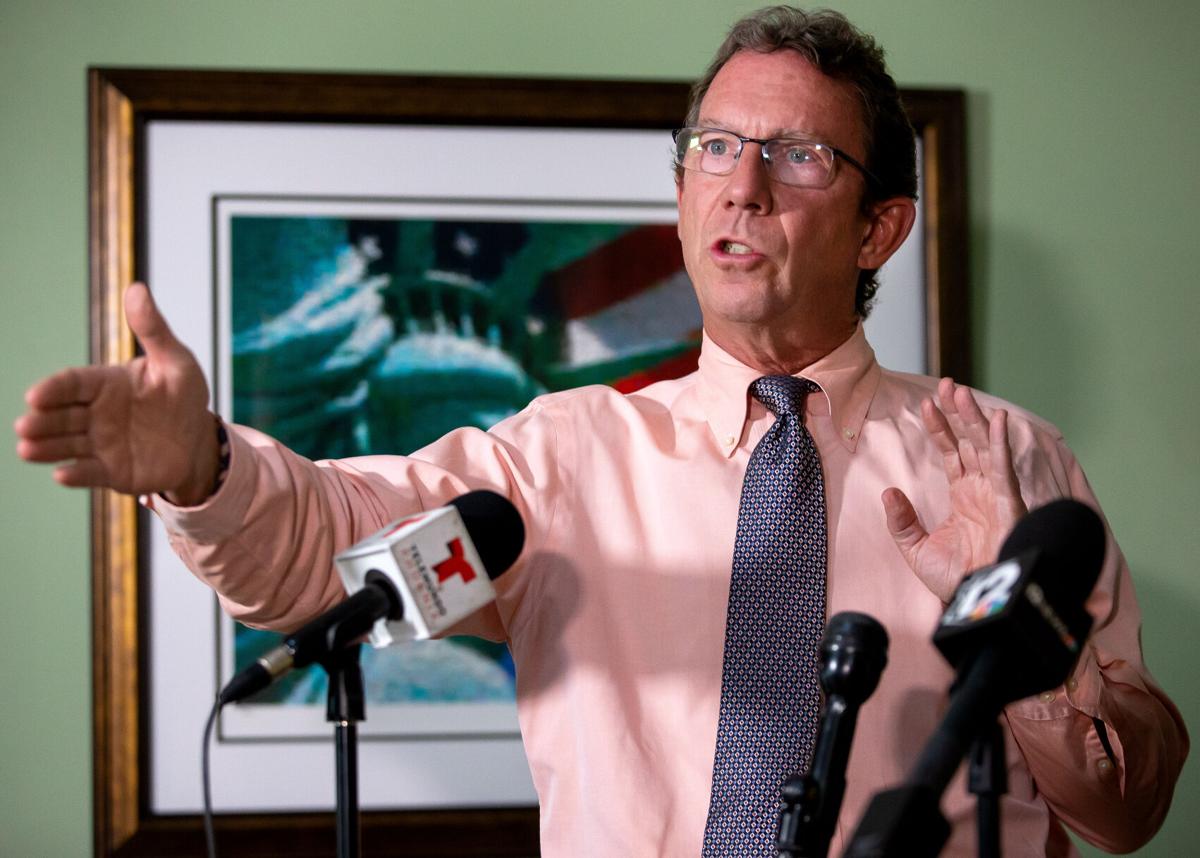 Attorney Mike Storie, who is representing Officer Ryan Remington, says several details of the events leading to the shooting were left out by the Tucson Police Department. 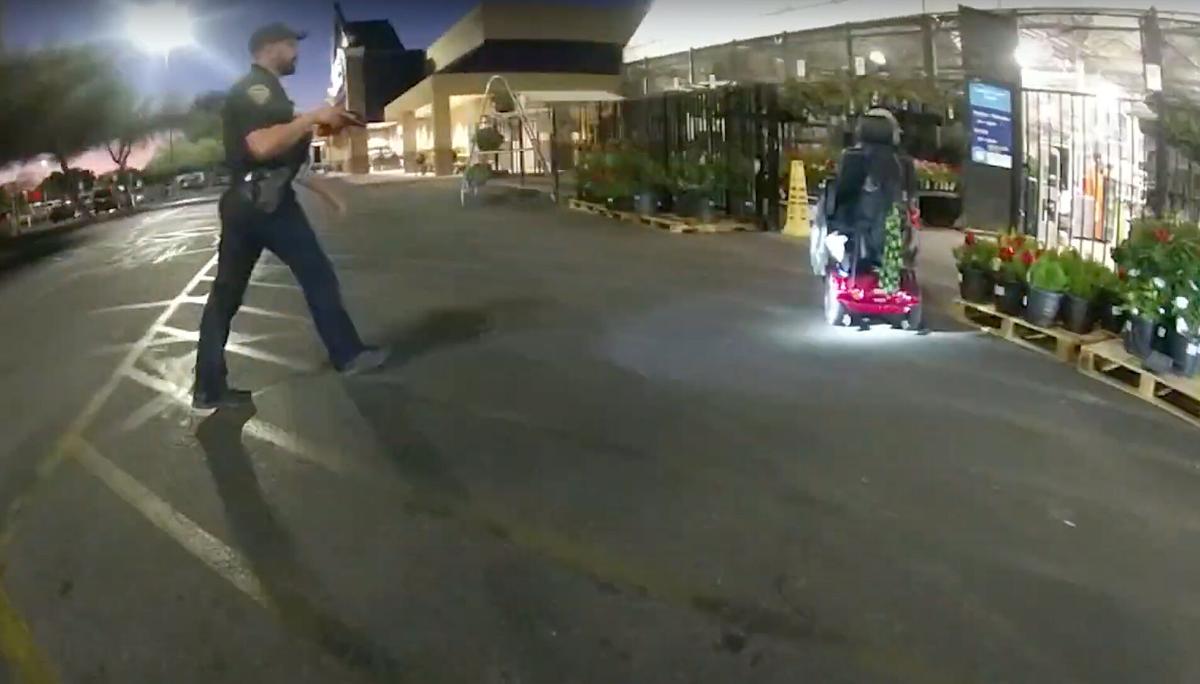 A Tucson police officer approaches a man in motorized wheelchair outside a Lowe’s Home Improvement store on West Valencia Road. The man in the wheelchair, Richard Lee Richards, 61, reportedly had brandished a knife and was shot dead.

The Tucson police officer who fatally shot a man in a motorized wheelchair will likely appeal if the department moves forward with his firing, his attorney says.

Mike Storie, the attorney representing Officer Ryan Remington, said in a press conference on Wednesday that the video released by the Tucson Police Department did not show all of the facts.

According to Storie, Richard Lee Richards, 61, threatened a Walmart employee with a knife to the point where the employee feared for his life.

On the way from Walmart to Lowe’s — where the shooting took place, Storie said Remington tried to use the least amount of force possible, to include verbal commands.

Storie said he believes Richards made statements that indicate suicide by cop, such as: “this is not going to end well, you people have taken everything from me in my life. The only way you are going to get this knife out of my hand is to shoot me.”

Storie also said he was deeply troubled by the situation, because of Tucson Mayor Regina Romero’s comments, not the officers actions.

“We are currently living in a climate where we have a very irresponsible mayor who comes out less than 24 hours after the incident and makes statements that are inflammatory,” Storie said.

The Pima County Attorney’s Office said on Wednesday that the office holds sacred the impartial review of the facts and once it receives the evidence in this incident, it will conduct such a review.

According to video and information released by the Tucson Police Department on Tuesday, Remington fired at Richards nine times, striking him in the back and the side, after he reportedly stole a toolbox from Walmart and flashed a knife. The shooting occurred after Richards left Walmart and was approaching the garden center entrance at a nearby Lowe’s on Valencia Road.

Richards had a long criminal record, including stints in prison, court records show.

Later, Richards would be convicted of second degree attempted murder of Steve Huber, a peace officer, on Jan. 8, 1998, court records say. Richards was also convicted of aggravated assault with a deadly weapon on Huber and another peace officer, Shawn Salloway. He was sentenced to 10 years in prison 2007.

Richards was released from prison in 2018, but was arrested again in 2019 after he tried to smuggle three immigrants into the United States. He pled guilty, saying he thought it would be easy money, court records show.

Richards entered a plea of guilty on Sept. 19, 2019, where he would face 13 months of imprisonment and two years of supervised release, court records say.

Richard’s attorney requested the court to review and consider Richards’ sentencing on Feb. 25, 2020, saying he had severe physical problems develop while in custody, putting him in a wheelchair, court records say.

Richards had just got out of prison when he met Bryan Serbian. Serbian was Richards landlord in Tucson.

Serbian said Richards did not tell him why he was in prison, but said it was for something he didn’t do. Serbian also said Richards liked to give him things and would ask him if he needed anything before going to the store.

“We were becoming friends, just kind of slow because he was gone all day, every day,” Serbian said.

Serbian described the shooting as crazy, saying it doesn’t make any sense for the officer to have fired nine times at Richards.

Tucson police say an investigation is underway but no charges had been filed against Remington, who has worked for TPD for four years.

Tucson police are looking for information about the shooting death of a 21-year-old on the city's south side.

Woman crashes into guardrail, dies on Tucson's southeast side

A 33-year-old woman drove off the roadway, striking a guardrail on Tucson's southeast side Tuesday.

The 26-year-old victim was pronounced dead at the scene after being found with gunshot trauma on Oct. 30.

The Tucson Fire Department says it received over 200 calls Thursday about possible gas leaks in neighborhoods across the city.

After Tucson police shooting of man in wheelchair, organizations call for change

Two organizations are calling on Tucson police, the mayor and the city council for changes in how officers interact with people with disabilities.

33-year-old Moss Orion Worthington was reportedly corresponding with one of the 14-year-old girls on social media.

Passenger Kallista Rayanne Segura was pronounced dead at the scene of the crash about 3 a.m. Sunday on Tucson's west side.

The process to determine whether to criminally charge a Tucson Police officer who shot a man to death in a wheelchair has begun.

A former Tucson police officer who fired at a man in a motorized wheel chair nine times, killing him, will appeal his termination, his attorney said Wednesday.

Attorney Mike Storie, who is representing Officer Ryan Remington, says several details of the events leading to the shooting were left out by the Tucson Police Department.

A Tucson police officer approaches a man in motorized wheelchair outside a Lowe’s Home Improvement store on West Valencia Road. The man in the wheelchair, Richard Lee Richards, 61, reportedly had brandished a knife and was shot dead.