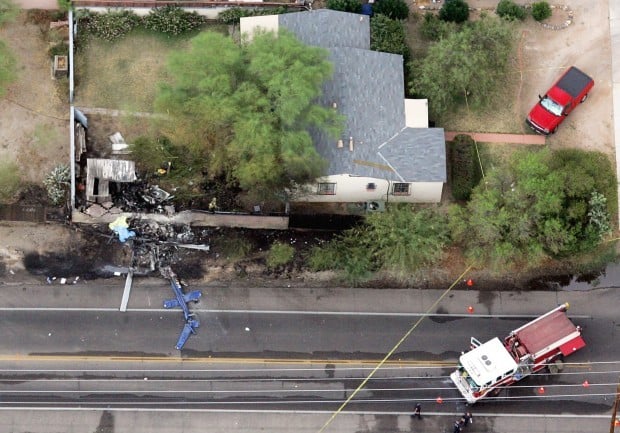 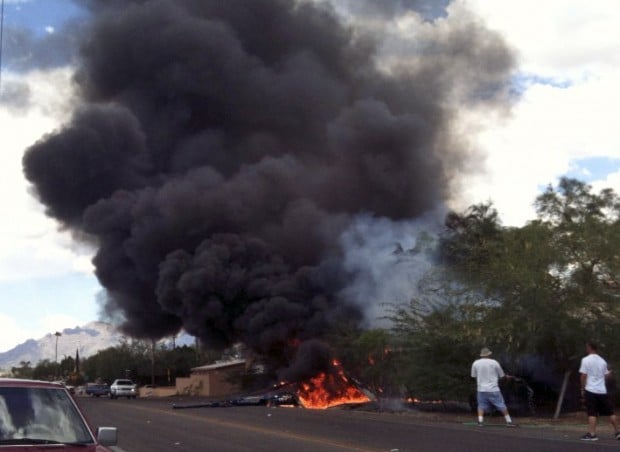 Flames and smoke from the scene. 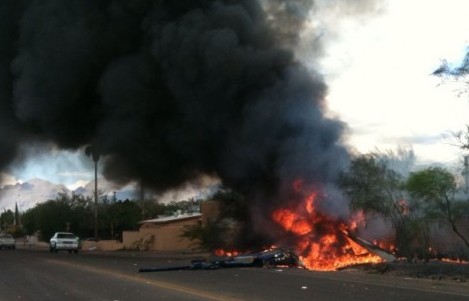 A medical helicopter in flames along Park Ave south of Glenn St. 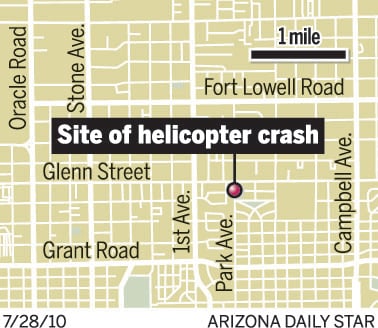 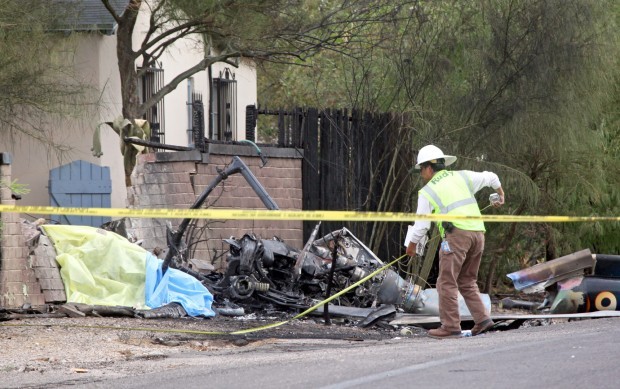 An investigator takes measurements at the scene of a helicopter crash that killed one crew member and seriously injured two others onboard when it crashed in a neighborhood near the intersection of East Glenn Street and North Park Ave. in Tucson, Ariz., Wednesday July 28, 2010. 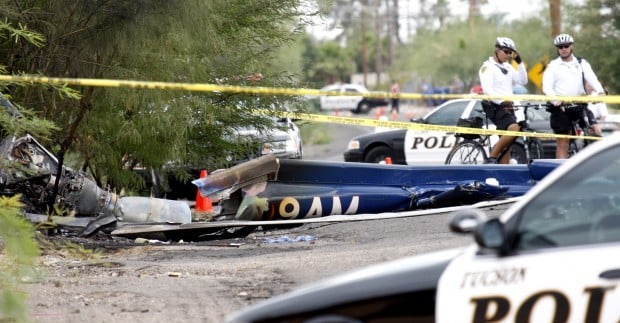 Three people were killed when a medical evacuation helicopter crashed on Tucson's north side Wednesday afternoon.

Killed in the crash were the pilot, flight nurse and paramedic, said Air Methods, the Colorado-based company that operated the LifeNet medical helicopter. There were no patients aboard the aircraft, the company said.

The AS350 B3 Eurocopter, which was based in Douglas, crashed into a fence in front of a house on North Park Avenue just south of East Glenn Street and burst into flames. A witness said the pilot appeared to manuever the stricken helicopter away from the home.

Authorities earlier said that one person was killed and two were critically injured in the crash. Air Methods confirmed at about 5:30 p.m. that all three aboard had died.

"This is a sad day for all of us at Air Methods and we extend our heartfelt sympathy to the family and friends of our employees who perished while on duty," said Aaron Todd, chief executive officer of Air Methods Corp.

The helicopter's pilot was in contact with the control tower at Tucson International Airport at the time of the crash, but there was no indication of a problem, said Lynn Lunsford, an FAA spokesman.

The aircraft was traveling from Marana to Douglas at the time, but was not transporting a patient, Lunsford said. It crashed about 1:45 p.m.

Eyewitness Ricardo Carrasco said the helicopter's rotors stopped working and it started plummeting toward the ground.

He said the pilot managed to steer the chopper away from the house.

"If he (the pilot) hadn't turned around he'd have hit the house," said Carrasco, who ran toward the helicopter after it crashed but wasn't able to get close because of a "a wall of flames."

He and bystanders helped evacuate people in the neighborhood. There are no reports of injuries to residents or bystanders.

"One of the employees heard a loud boom, but he didn't know what it was and he went back to working on a car," said Tyler Edwards, 34, a service advisor at Stuttgart Autohaus, 614 E. Glenn St.

"Two people walked in who said they saw the craft go down. It appeared it had a malfunction and they saw it go down and then there was a lot of black smoke," said Edwards of the husband and wife who walked into the shop that repairs Volkswagens and Audis.

He said not long after the incident police squad cars, motorcycle officers, paramedics and fire engines began "flying down the street."

Officers began closing down the street at North First Avenue and East Glenn Street toward the east, Edwards said. Traffic began piling up in the area but motorists remained patient, he said.

John Townsend, 74, who lives in the house where the helicopter crashed into the fence said he heard a loud noise shortly before 2 p.m. and then the house shook. He said he went into the back yard and saw smoke and flames.

Immediately after the crash Townsend said he didn’t realize it was a helicopter. He said he grabbed a garden house to try to put out the flames, but the fire and smoke were too intense and he went back inside.

Townsend said a neighbor banged on his front door and told him to get out of the house.

The FAA is sending inspectors to the crash site. The agency will conduct the investigation along with the National Transportation Safety Board.

Stay tuned to azstarnet.com for updates.

Three people were killed in a helicopter crash on Tucson's north side Wednesday afternoon.

Reader-submitted video of the crash today in Tucson.

Flames and smoke from the scene.

A medical helicopter in flames along Park Ave south of Glenn St.

An investigator takes measurements at the scene of a helicopter crash that killed one crew member and seriously injured two others onboard when it crashed in a neighborhood near the intersection of East Glenn Street and North Park Ave. in Tucson, Ariz., Wednesday July 28, 2010.