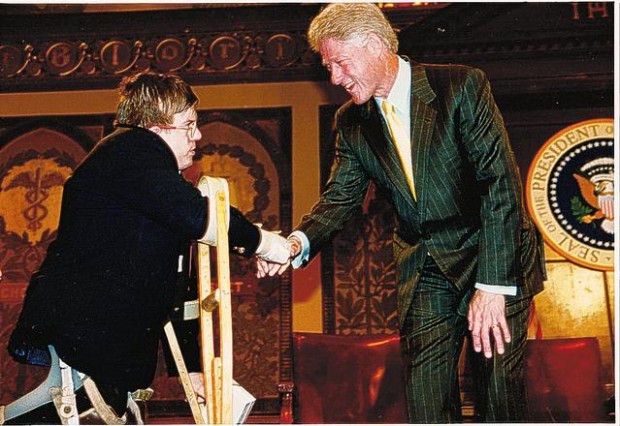 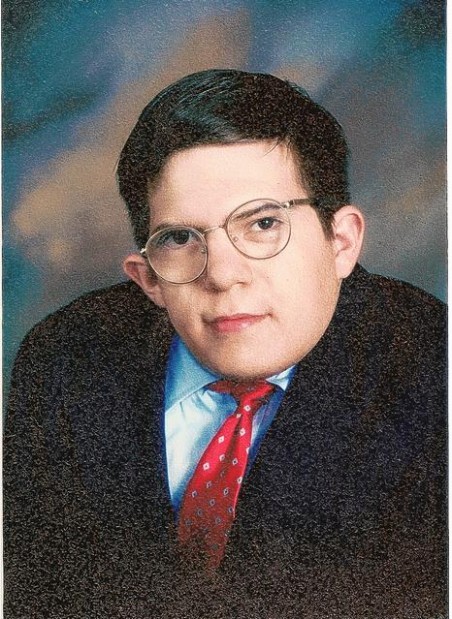 His first task in life was to think of himself as an upright person.

Daniel Bartlett, born with his lower back undeveloped, strapped himself into an articulating brace each day and moved about on crutches, taking the weight of his disability onto his very young shoulders before he reached the age of 2.

His shoulders developed quickly and prodigiously, outpaced only by the development of his young brain. He laughed early and seemed to get the jokes the adults around him told.

His sister Elizabeth's theory, outlined in her obituary tribute to him, is that Daniel "pushed himself to this genius level of intelligence to help people see beyond his prominent physical disability."

"He was a remarkable young man," said Marcia Berger, a pediatric physical therapist who began an after-school group for children with varying abilities that became the acclaimed Third Street Kids/Arts for All.

"He was 18 months old when the therapist working with him called me in. He was crawling around on the floor in his bedroom, he had these blocks he's putting together, spelling c-a-t, and b-a-t and d-o-g," said Berger.

"I said to his mother, 'Does he know what he's doing?' That gave me quite a clue as to who this young man was, and also this family."

His mother, attorney Janice Wezelman, and his father, attorney and former Arizona Sen. David Bartlett, said they were asked at his birth to consider institutionalizing Daniel, warned that he might have mental as well as physical disabilities.

It was a notion they never considered.

At age 4, wanting to participate in a play Third Street Kids was putting on, Daniel taught himself to read.

Frank Hernandez, now assistant director of the program, was one of the "kids" at the time. He remembers appearing with Daniel in a play.

"This wasn't some little kids' play. It had songs, two acts, 13 roles and he didn't just know his part — he knew them all."

Daniel grew into a young man you didn't want to arm wrestle, or argue, with. He graduated from Lineweaver Elementary School, St. Gregory's Preparatory School and University High, where he was a presidential scholar and a member of the award-winning academic decathlon team. He also won chess tournaments and Shakespeare competitions and, even though he was deaf in one ear and missing a thumb, he had perfect pitch and mastered the piano, trumpet and shofar.

University of Arizona math professor Fred Stephenson first met Daniel at high school math competitions and got to know him better when Daniel, still in high school, enrolled in an upper-division math class Stephenson taught at the UA.

In the first class, Daniel corrected something Stephenson wrote on the board. He also fell over.

"He stood 4-foot-6, encased in a plastic sort-of exoskeleton," said Stephenson. "He wouldn't sit down. When he came to class, he'd be a tripod on one leg and two crutches. He had a way to take notes if he wanted to.

"That first day, near end of class, he fell down. He was writing something and let loose of one of his crutches, fell over on his back, sort of like a turtle. A student near him, a young woman, tried to help. He just bellowed out, 'Leave me alone, I can do this myself.' Every member of that class couldn't get out quick enough."

He did everything he could for himself, said his father, and used his intellect to force people to deal with him as a person and not a person with a deformity.

His parents wanted him to stay at home for college, but he was offered early admission to MIT, Stanford, Caltech and Harvard. "He talked to Fred Stephenson and he said, 'You're a fool if you don't go to Harvard,'" said David Bartlett.

His mother said part of the appeal was simply being on his own. "He liked getting away from home where there were rules about things like going to bed at a reasonable hour."

Stephenson kept in touch by e-mail and found they'd be online together at 1 or 2 a.m. — Tucson time. It was three hours later in Cambridge, Mass.

"In Tucson, he was just seen as a god and a genius," said Stephenson. "I knew when he went to Harvard he would meet people that were his equal in math, and he did. He met some 16- and 17-year-olds taking math at the graduate level."

Daniel returned to Tucson for graduate school at the UA, and Stephenson and he met periodically to talk.

He wishes now he had met with him more often — not for Daniel's sake, but for his own.

"I really looked forward to those times," said Stephenson. "I would learn so darn much more from him than he would ever learn from me. He had common sense to the extreme. I would float something out there I was thinking about, from Iraq, to local politics to math department politics and he would think about it a little, and then he would boil it down and come back with something that went right to the heart of it, to the point where I'd say 'Of course, my gosh, that's exactly right.' "

Berger said Daniel helped her persevere in efforts to aid children like him. "He was so much the reason that kept me going — being a single parent, raising my kids, working as a physical therapist. Kids like Daniel made me want to give up the afternoons."

The program relied on volunteers, and Daniel would help screen them. "There are a lot of people who want to help the poor handicapped kids," said Hernandez, "but we didn't want a pity party. Daniel would take his crutch and tap it or smash it onto their foot. If they stood up and said 'Hey kid, what are you doing?' then we'd have respect for them."

His mother said Daniel never complained about his lot in life. "He'd say, 'It's not like it was ever different for me.' If somebody made fun, he wouldn't acknowledge it." His weapons were his intellect and a sometimes wicked sense of humor.

"After he died," said his mother, "we got all these letters about how nice he was. It was a bit of a surprise. He had his sweet side but he had an edge. He would argue with us about anything. He'd engage you verbally so you wouldn't see him as somebody different."

In recent years, Daniel had a couple of episodes of shortness of breath that landed him in the hospital, but he resisted his parents' entreaties to live at home. He enjoyed the independence of living near campus. His death in August came "out of the blue," according to his father.

His parents were hosting a political fundraiser that evening. He had visited, along with three of his closest friends, and then the four had gone out for drinks. As they returned to the car, he said he was having trouble breathing. His friends called 911, but Daniel had died of sudden cardiac arrest by the time paramedics arrived minutes later. He was 25.

His parents said they were comforted somewhat that Daniel was out having fun with lifelong friends that night.

"We realize all the academic performance meant so little. The important thing is, 'Did you have a good time?' " said his mother.

Next phase of vaccine rollout off to a chaotic start, posing hurdles to elderly residents

Pima County residents 65 and older, who make up 80% of COVID-19 related deaths, are struggling to navigate the chaotic rollout of vaccine distribution.

The Arizona Department of Health Services now has statewide information about  vaccination sites.

Pima County: 20,000 quickly register for next round of COVID-19 vaccinations

Convicted murderer from Tucson kills self in prison, officials say

Inmate was found hanging in his cell, prison officials say.

Motorist killed after fleeing during highway traffic stop near Tucson

The deceased driver fought with a state trooper who pulled him over for speeding near Marana, authorities said.

Health officials in Pima, Cochise and Santa Cruz counties say they have too little vaccine for their residents.

Deputies shot and killed a 19-year-old man after they say he fled a traffic stop and rammed a patrol vehicle.

Westward Look's plans to possibly build shops, restaurants, apartments, casitas and a hotel on the 75-acre resort property have troubled many neighbors, despite resort owners' steps to scale back some of their plans.