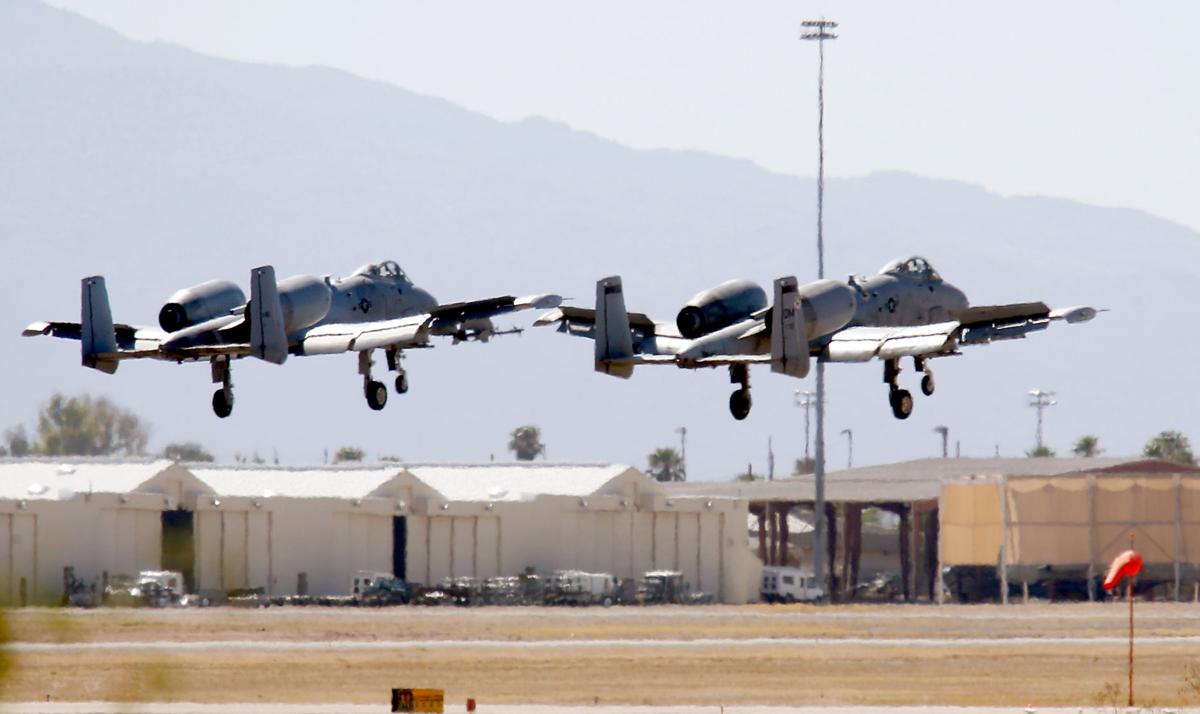 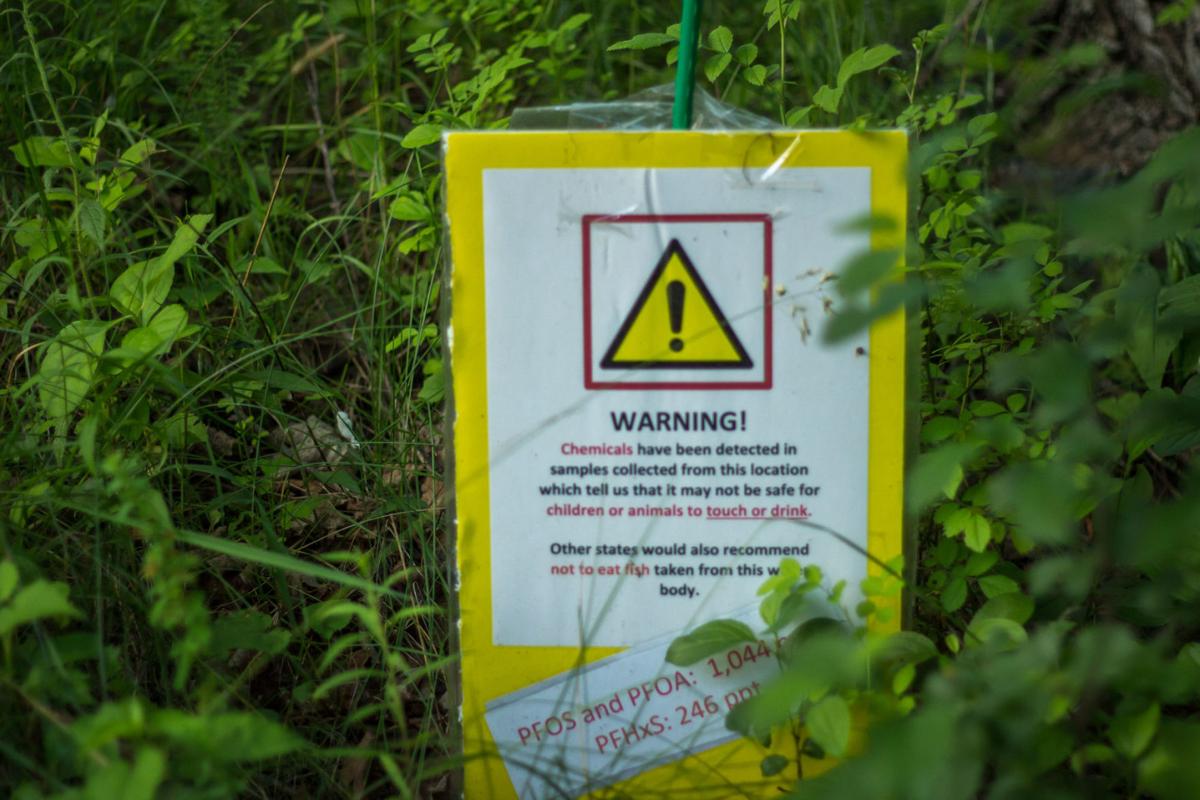 The city may ask for millions of dollars in damages to clean up two nonoperative wells and to clean groundwater and soil.

Davis-Monthan Air Force Base admits it allowed some toxic chemical compounds used for firefighting to wash into the soil and discharged the compounds in diluted form into sewers.

But until the base finishes an investigation this fall of its use and disposal of the compounds, D-M officials said they’re not ready to say whether their use of per- and polyfluoroalkyl substances, or PFAS for short, contributed to contamination of two city of Tucson drinking water wells lying to the north.

The base, like many others around the country, used these compounds in firefighting foam for more than four decades — from 1971 until last year, a D-M spokesman said in a written statement. Most commonly, the compounds used were PFAS varieties known as PFOS and PFOA, neither of which is legally manufactured in the U.S. today due to ongoing and increasing concerns about their health risks.

They’ve been linked in human studies to some forms of developmental and reproductive problems, and to testicular and kidney cancer. While health agencies have not said these compounds cause cancer in people, an agency of the World Health Organization has said that PFOA is “possibly carcinogenic to humans.”

While the PFAS compounds are no longer used, releases of the foam are now treated as hazardous material releases, “requiring immediate action,” said the D-M spokesman, Capt. Joshua Benedetti.

Tucson City Councilman Steve Kozachik, who first told the Arizona Daily Star about the city well contamination, said the base’s statement amounts to an admission of culpability. Even before D-M finishes its investigation, base officials should meet with Tucson Water officials “immediately” to start work on a plan to clean up the city wells, Kozachik said in an interview.

“We now know it wasn’t a bunch of guys sitting at the end of a runway washing Teflon pans,” said Kozachik, referring to another common use of these compounds, in non-stick products. “The public is concerned about this. I’ve gotten calls and emails from people who want this addressed, and not in the early fall.

“They need to be sitting down right now with Tucson Water ... not studying it till fall, and coming up with some sort of boilerplate bureaucratic response that, ‘We can’t determine cause and effect,’” said Kozachik.

He added that the base’s acknowledgment that some of the compounds washed into the soil makes for “pretty easy dots to connect.”

Base officials, however, say they must first determine if these compounds were released at specific sites on the base.

Historical evidence and interviews of base personnel done for a preliminary assessment only suggest that the foam was used in specific locations, said base spokeswoman Lt. Lauren Gao. An ongoing site inspection, through sampling and testing, will verify if and how much is present in those locations, Gao said.

The base, like many military bases around the country, has been conducting a detailed investigation of its past use and disposal of these compounds for some time. Nationally, the Air Force has identified 200 military installations where the foam may have been released since the early 1970s.

Besides their use in firefighting foam, PFOS and PFOA are common compounds found in a variety of products, including a formula of Aqueous Film Forming Foam (AFFF). Commercial and military emergency fire-response teams used the foam for years to combat petroleum-based fires, Benedetti said.

Davis-Monthan officials have been sampling and testing for PFAS compounds for some time. When complete, their site inspection will verify if AFFF was released at individual sites, whether PFOS/PFOA is present there, and whether the compounds pose a risk to drinking water, added Gao, the base’s chief of media relations.

“At Davis-Monthan AFB and across the U.S., the Air Force is taking proactive measures to identify, respond to and mitigate the risk of mission-related PFOS/PFOA contamination that could adversely impact drinking water sources on and around installations,” Benedetti said.

The process for clearing released foam on base depended on the location, Benedetti said.

“For hangars, the Air Force obtained permission from the county to dilute and discharge the material into the sewer. For runways, it washed off into the soil,” he said.

In 2017, Davis-Monthan replaced older foam with a more environmentally responsible formulation in firefighting vehicles, he said. Use of the older foam in hangars is scheduled for replacement in July.

A 2015 report for the Air Force identified one fire-training area on the base where a “high mass” of firefighting foam was released. At that site, training activities were conducted at “unlined burn areas” from 1968 to 1986, and firefighting foam was used there for weekly and monthly training during roughly the same period, the report shows.

At four plane crash locations, unknown or small amounts of firefighting foam were applied, and the foam was left to evaporate or dry out, the report said.

At an unlined stormwater drainage canal, an unknown amount of firefighting foam was released into the environment, the report said. Materials were received in the canal from “washouts” of foam material conducted at two flight aprons on the base, along with surface water from various locations including, possibly, foam materials from the four plane crashes.

As for the sewers, the same report says that wastewater from hangars and fire stations is routed by pipelines to a wastewater plant on site that pre-treats industrial waste for discharging.

The treatment plan removes oil, grease and heavy metals before transporting the effluent off the installation to the Tucson Diversion Channel, a flood-control channel.

That channel, in turn, empties into Pima County’s Kino Environmental Restoration Project flood-control basin, which discharges water into the Santa Cruz River to the west, said the 2015 report, which the Star obtained from the Arizona Department of Environmental Quality. The report was done by the Air Force Civil Engineer Center at Lackland Air Force Base in Texas.

The 2015 report said there was no evidence of the firefighting foam being released into the environment from that pre-treatment plant, ADEQ noted in a statement to the Star.

But other “washout” materials containing the foam were “potentially released to the environment via the base’s stormwater system,” added ADEQ. It said it hasn’t confirmed the report’s accuracy, and that the report was commissioned by Davis-Monthan.

There are no plans to base the new jets at D-M.

The Air Force will begin testing the groundwater at Davis-Monthan for contamination from dangerous chemicals in firefighting foam.

Gardening central to refugees building a new life in Tucson

On a recent hot, dry day, garden plots next to the midtown Literacy Connects building were full of tomatoes, amaranth, corn, peppers, onions, …

The conference brought out the amputee community in mass from around the word for three days in Tucson this week.

Given their age and short time together, the girls play some serious norteño and cumbia music.

Professionals will offer advice on restoring rights, setting aside convictions.

Luis Carrasco: Most of us don't like children in cages; that's a start

It heartening to see that taking children away from their parents and locking them up is still considered unacceptable by most Americans.

A section of Interstate 10 near the New Mexico-Arizona border has been closed in both directions due to a dust storm.

WASHINGTON – Tucson mom Linda Robles was in Washington last week to demand that the Environmental Protection Agency ban TCE, the chemical she …

On some days in part of the community, our air is bad enough to potentially cause major health problems for certain people.

One estimate suggests that the lawsuit could be worth tens of millions of dollars.

Issue is of significant concern after chemicals found in drinking wells in Tucson, Marana.

Eight monitoring wells contain excessive levels of the contaminants, raising concerns that the pollution could be moving off site toward Tucson Water drinking wells.

PFAS chemical compounds' presence in groundwater under the base is "consistent" with where the foam was most heavily used.

Marana will have two treatment plants online to remove contamination from PFAS and another chemical from its drinking water by early February at the latest. The Arizona Department of Environmental Quality expects to have a pilot treatment plant in operation by summer 2021 to start cleaning up PFAS-tainted groundwater in Tucson Water's central wellfield, just north of Davis Monthan Air Force Base.

The city may ask for millions of dollars in damages to clean up two nonoperative wells and to clean groundwater and soil.