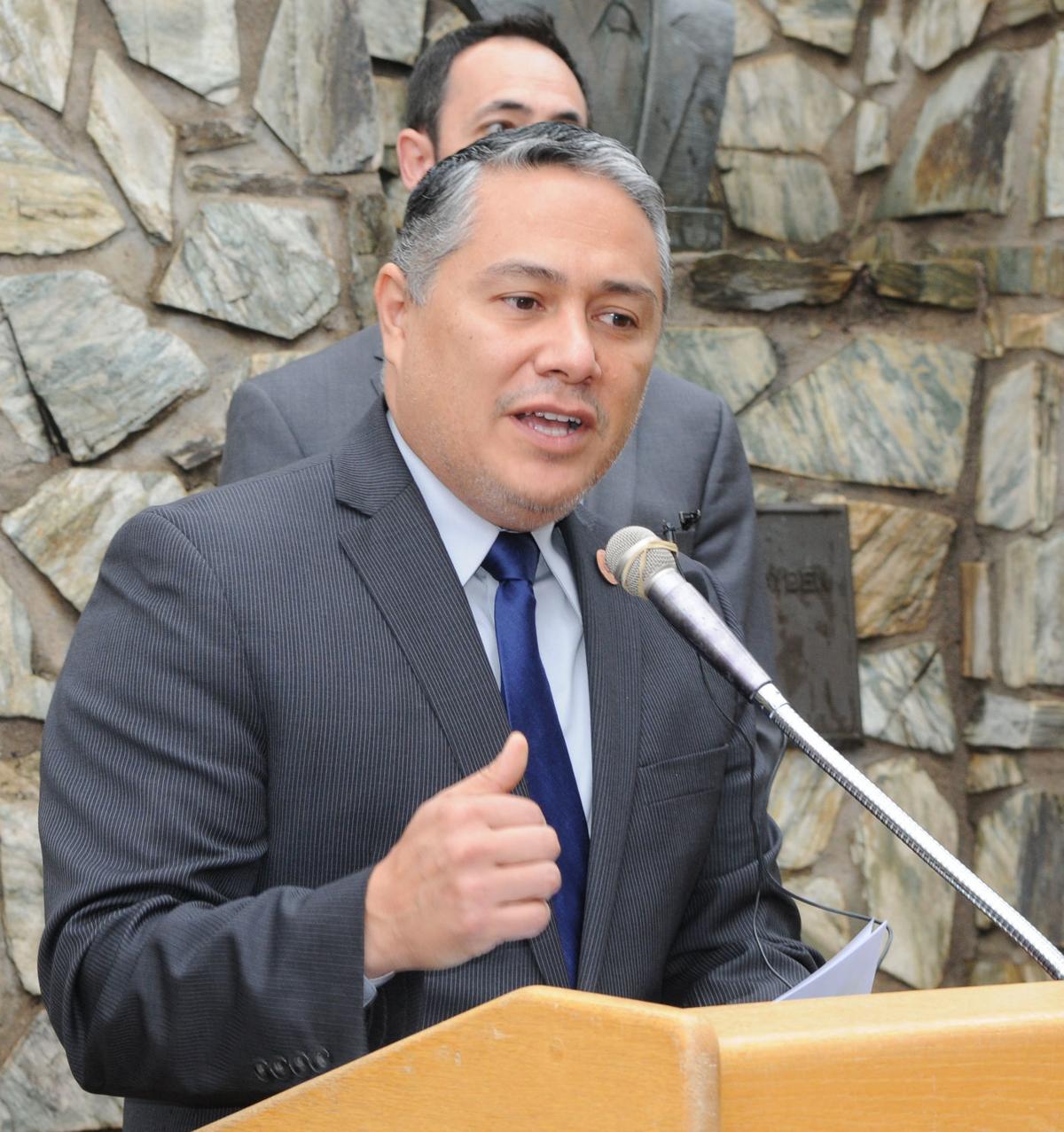 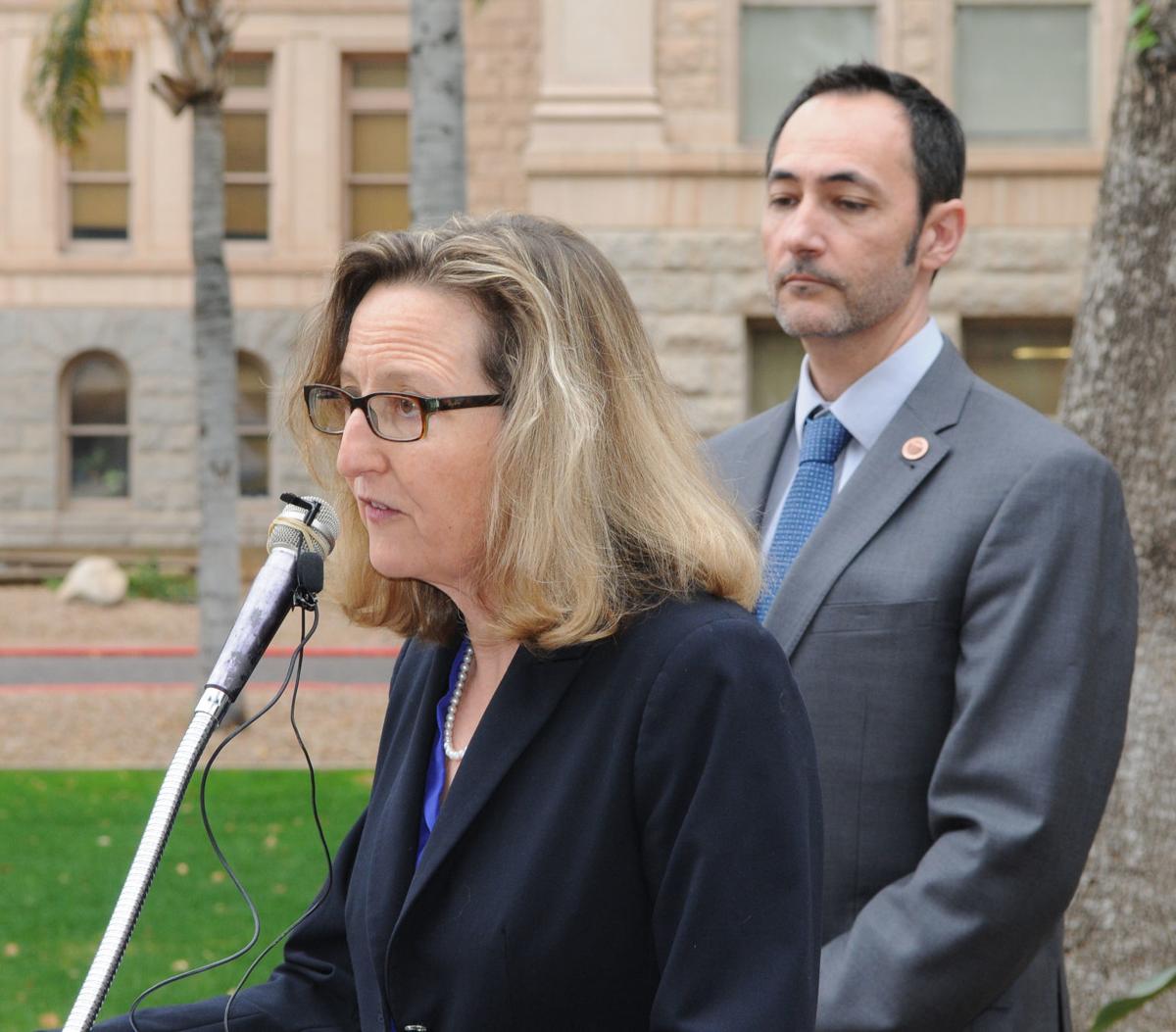 Rep. Kristen Engel sketches out proposed changes in the state’s criminal-justice system. With her is Rep. Domingo DeGrazia, a fellow Tucson Democrat.

PHOENIX — Legislative Democrats trotted out their plans Tuesday to reduce prison population in hopes that there are now enough Republicans — including the governor — to get at least some of them enacted.

Much of what is in the package is not new. They range from giving judges more sentencing discretion to automatically restoring the right to vote of convicted felons after they have completed their prison terms.

What could be different this year, however, is an interest by several key Republicans in finding ways to deal with the fact that locking people up is eating up close to 10% of the state budget. In fact, several GOP lawmakers already have proposed their own changes.

Most notably, Rep. Walt Blackman, R-Snowflake, wants to repeal some of the requirements of the state’s mandatory sentencing laws and give judges more discretion to decide what is an appropriate penalty. And Blackman also wants to allow local governments and police agencies to set up a “pre-arrest deflection program” to provide alternatives to prosecuting some cases.

Rep. Diego Rodriguez, D-Phoenix, made a specific push for his proposal to expand the ability of inmates to earn early release for good behavior and completing certain programs while behind bars. That would include those convicted of not just nonviolent offenses but also some charged with violent crimes.

“It is not a zero-sum game between victims and reform,” he said.

“We can make sure that people pay their debt,” Rodriguez continued. “But we can make sure that those folks who are incarcerated have a chance to show they’ve turned their lives around, that they have taken advantage of the programs that are offered that we hope to help establish, and that they can reenter society without threatening public safety.”

Rep. Kristen Engel, D-Tucson, said that goes to the question of ensuring there are programs that help ensure that those who are released, as virtually all will be, have gotten some actual treatment.

She said records from the Department of Corrections show that 78 percent of everyone locked up — about 33,000 inmates — have substance abuse history and need treatment.

“And yet the Department of Corrections has capacity to treat only 4,000 inmates at a time,” Engel said.

Other elements of the Democrat plan include:

Engel said there is broad support even among Republicans for many of these changes, suggesting that it has been GOP leadership — and Gov. Doug Ducey — who have been the problem. Blackman disagreed.

“Actually, leadership has been very supportive,” he later told Capitol Media Services. And Blackman said even the governor’s office has “been listening” and has been reviewing the measures.

Still, it was Ducey who vetoed legislation last year by Rep. Ben Toma, R-Peoria, that would have limited the ability of prosecutors to “stack” charges against defendants to get an enhanced sentence. The governor, in his one-line letter to legislative leaders, did not mention having been lobbied by prosecutors to quash the measure. Instead his veto said only that he was concerned about “the unintended consequences that may arise from this legislation and the effect these changes would have on victims.”

The council seeks to keep construction projects from damaging tribal remains and antiquities.

Karen Fann said Tuesday the proposal, introduced by Sen. Sylvia Allen, R-Snowflake, needs work and legislators are hoping to have a quick session.

The proposal would add a 3.5 percent surcharge on Arizona income taxes owed by individuals making more than $250,000 a year and couples filing jointly with income above $500,000.

Rep. Kristen Engel sketches out proposed changes in the state’s criminal-justice system. With her is Rep. Domingo DeGrazia, a fellow Tucson Democrat.