Tucson-area school districts are planning to feed children in need during school closures despite a lack of direction from the state.

Thousands of K-12 students in Tucson receive free and reduced breakfast and lunch through federal funding, meals that many of those children rely on. With school closures in effect until at least March 27, figuring out how to feed kids has been a top priority for local school leaders.

Shortly after Gov. Doug Ducey announced a statewide closure of K-12 schools on Sunday in response to the COVID-19 pandemic, David Baker, superintendent of the Flowing Wells Unified School District, got a call from its food provider.

Flowing Wells contracts with the company throughout the school year to serve its 5,650 students, 72% of whom qualify for free and reduced meals.

Cafeteria manager Josue Mora arrived at Walter Douglas Elementary at 6 a.m. on Monday to prepare to-go breakfasts and lunch sacks. Normally, Mora and his colleagues would be preparing for children to stream into the Flowing Wells cafeteria, but the school quickly transitioned with the shifting landscape.

Walter Douglas was joined by Flowing Wells’ nine elementary, middle and high schools in handing out to-go breakfast and lunch to anyone 18 and under.

The district had handed out 259 breakfasts and 784 lunches by Tuesday afternoon.

On a table set up outside the school, Mora handed out sacks with a turkey and cheese sandwich, an orange, an apple, a milk box and cereal, with gloves on his hands.

Flowing Wells and Catalina Foothills are the only two local districts that weren’t set to be on spring break this week.

The Tanque Verde School District governing board had voted to go on spring break immediately at an emergency meeting the day before.

Catalina Foothills is recommending that its families in need get food at the Flowing Wells schools, which are feeding children regardless of which district they attend. Catalina Foothills has a smaller number of children who rely on federally funded meals, but having to drive across town to get food could prove a hardship for some families.

In Tucson’s largest school district, TUSD, many families do not have transportation, which is a consideration in deciding how to address food insecurity once the closures go into week two.

TUSD announced it will begin offering grab-and-go meals at 32 locations for children 18 and under on Monday.

TUSD Governing Board member Adelita Grijalva said she hopes the district can find a way to deliver meals as well, since some students can’t reach the distribution sites without the school buses running.

One idea she had was delivering to-go meals to school bus stops, where families can more easily pick them up.

The district will look at a plan during an emergency governing board meeting on Wednesday.

Like other districts that were set to be on spring break, TUSD is using this week to figure out how to deal with the unknowns of emergency school closures.

Besides feeding kids in need, school districts need to figure out how to support hourly-wage employees who won’t be working; how to fund schools when funding is based on the number of days a student is in school; child-care options for working parents; and a method of providing home instruction to a diverse student body that does not have equitable access to internet or computers.

As of Tuesday, school leaders were still waiting for instruction from the governor and Arizona Department of Education on these issues and more.

Ducey and state schools chief Kathy Hoffman said in an open letter on Sunday that they would ensure students in need receive meals, coordinate child-care options, make sure school employees don’t see disruption to their pay, determine the extent of any potential makeup days and more.

The Department of Education is recommending that schools continue to pay hourly staff, but have yet to explain how districts can legally do so if the employees aren’t working, since that’s barred under state law.

“Those are critical questions that we’re not getting answers to,” Williams said. “Lots of it is left to local districts, kind of still doing what they can but with no real direction.”

For now, Baker, with Flowing Wells, said the need for food is increasing. And while he hopes for guidance soon, he said the district will make its own plan without it.

The Arizona Department of Education is putting together statewide guidance on all these issues, some of which may have to be addressed district by district, said spokeswoman Morgan Dick.

Working alongside the governor’s office and Legislature, figuring out how to pay hourly staff is “one of the many riddles” the state is trying to solve, Dick said.

What: Children ages 18 and under can get grab-and-go breakfast and lunch at all district schools.

What: Marana Cares Mobile will serve free meals for children.

When: Daily through Friday, March 20

What: Sunnyside will offer grab-and-go breakfast and lunch to all children 18 and under. Both meals can be picked up in one trip.

What: Free grab-and-go meals for children 18 and under. Drive through service and a walk up option will be available. Kids must be present when meals are being picked up.

Starting on Monday, March 23, TUSD plans to offer grab-and-go meals at 32 locations. Children 18 and under will be able to pick up a hot lunch meal and a breakfast for the following day Monday through Friday. The meals will be distributed via drive-through service and children must be present at pick up. The district says it will release more details on Wednesday, March 18.

Desert Diamond Casinos are open but with extra precautions.

Arizona public schools to close for at least 2 weeks

The closure will run through at least Friday, March 27.

Jury duty is suspended until April 10 for trials that have not yet begun.

Banner-UMC and other health-care sites will soon have drive-through screening locations to allow symptomatic Arizonans to be tested, state officials say.

The crash happened on Feb. 8 and seriously injured a woman. On March 16, officers were informed that she died from her injuries.

Fourth Avenue Spring Street Fair is back on — virtually, on Facebook

The wares of 250 national artists and Fourth Avenue merchants will be available online for purchase. Unfortunately, there's no virtual Indian fry bread.

If students are not back in school March 30, a proposal would suspend certain state laws and provide flexibility to educators.

TUSD prepares to head back to school — virtually — amid coronavirus outbreak

Tucson's largest school district is working to assess the digital needs of its students while also finding ways to ensure employees are paid during the K-12 closures.

Tucson teachers are heading back to school, preparing to deliver remote instruction

With closures planned through at least April 10, Tucson-area school districts share their plans for instruction during the coronavirus outbreak.

The state is working with school districts to identify childcare sites for children of essential public workers during the pandemic.

Arizona Schools Chief Kathy Hoffman estimates more than 100,000 students don't have access to technology to do school work at home, putting them at a disadvantage during the coronavirus-related closures.

Arizona high school seniors will get their diplomas despite coronavirus closures

How graduation will be celebrated is being left up to local school districts.

Missing prom and graduation ceremonies may seem trivial compared to the devastation unleashed by the coronavirus pandemic, but for Tucson teens, it's a loss of lifelong memories. 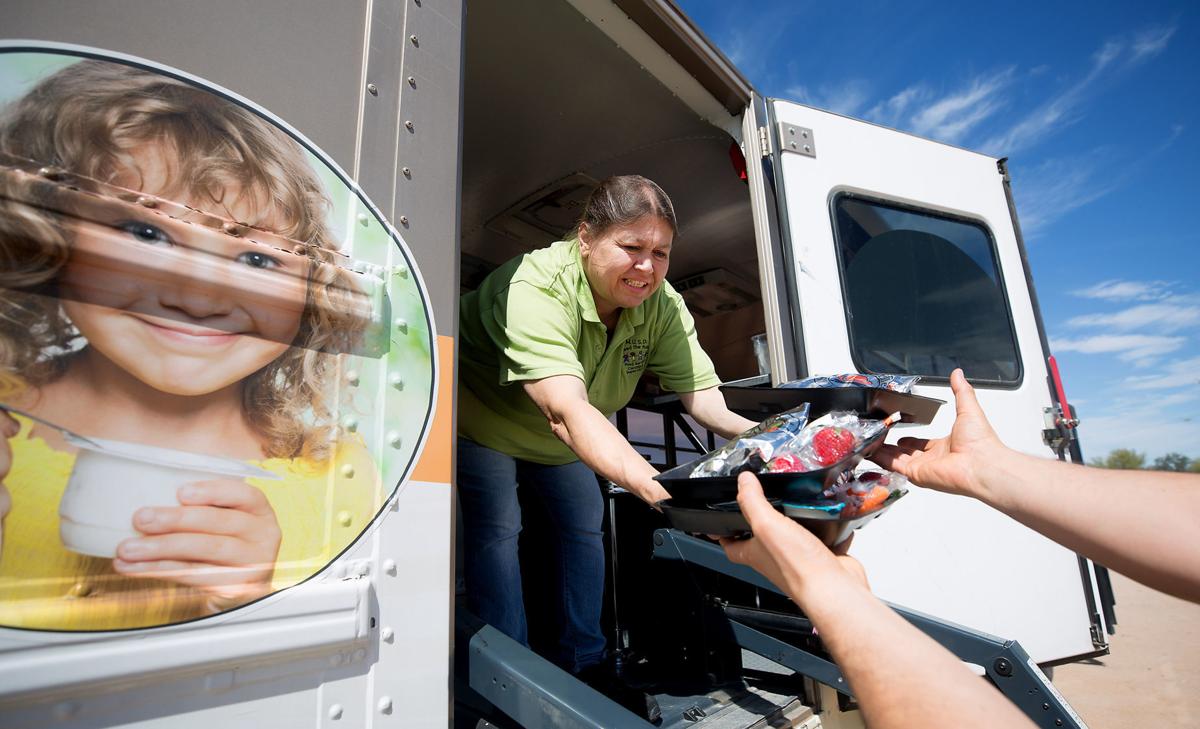 Sheri Bright, cafeteria manager at Picture Rocks Elementary School, hands out meals from the Marana Cares Mobile at the corner of Sandario and Anthony roads in Marana. 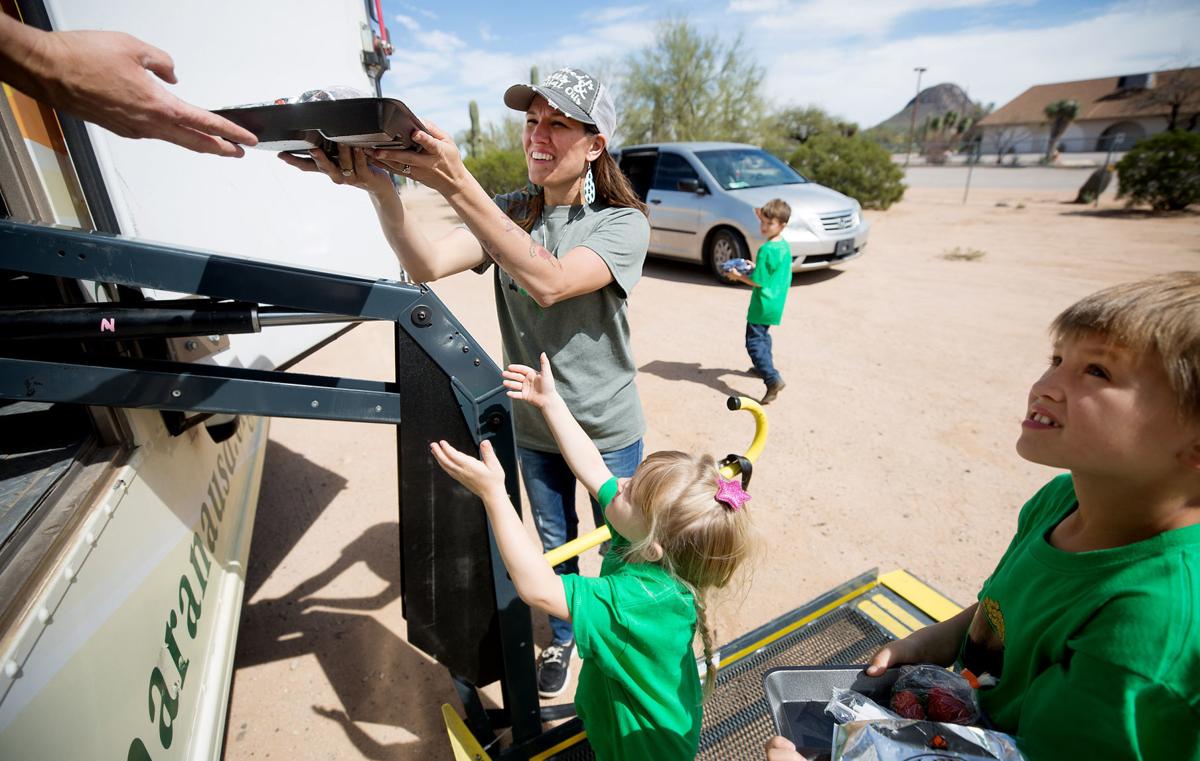 Brittany Summerkamp grabs a tray of food for her daughter, Molly, as her son, Dakota, far right, watches, as they pick up food at the Marana Cares Mobile at the corner of Sandario and Anthony roads in Marana, Ariz. on March 17, 2020. The program feeds kids in need over planned school breaks. School districts across Pima County are coming up with plans to continue food distribution during a two-week emergency shutdown of schools due to COVID-19.