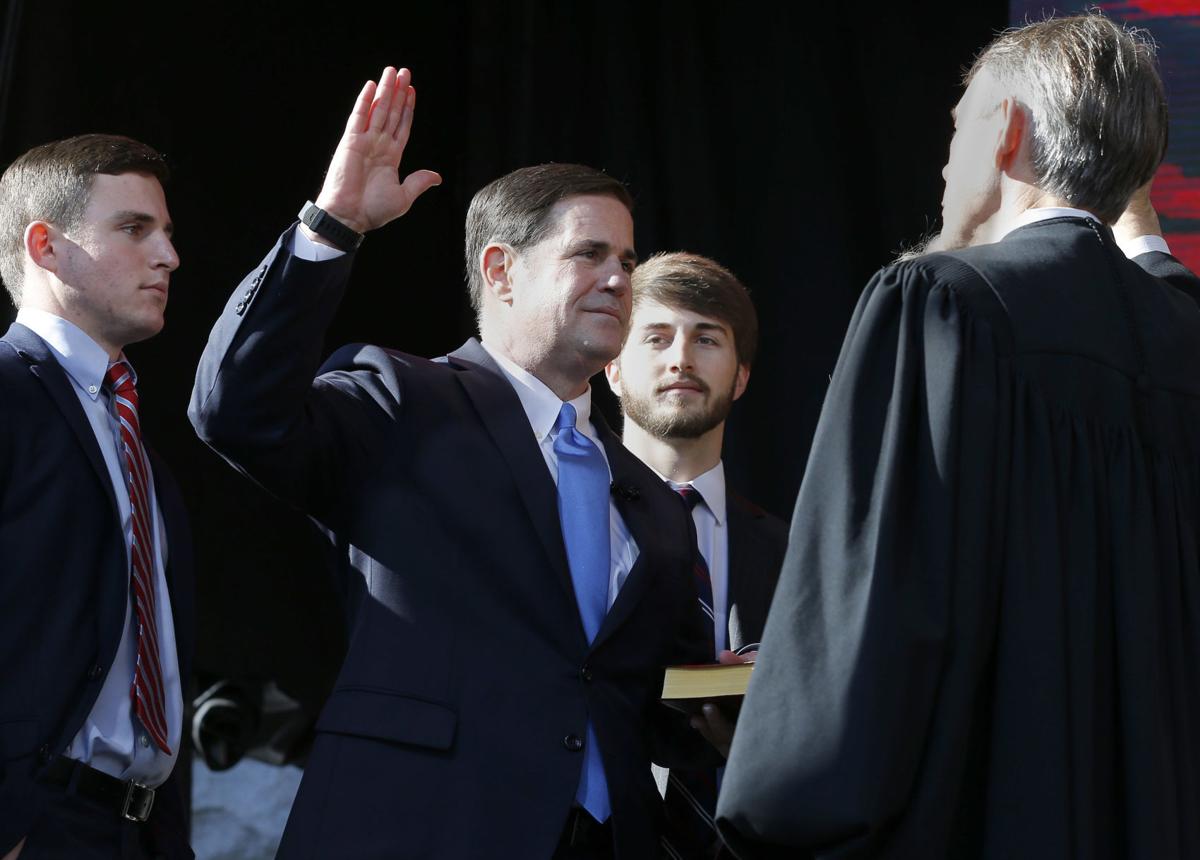 Gov. Doug Ducey, taking the oath of office, urged the Legislature to approve a plan to conserve Colorado River water. “Democrats and Republicans rose above party labels,” he said, referring to a similar agreement some four decades ago. 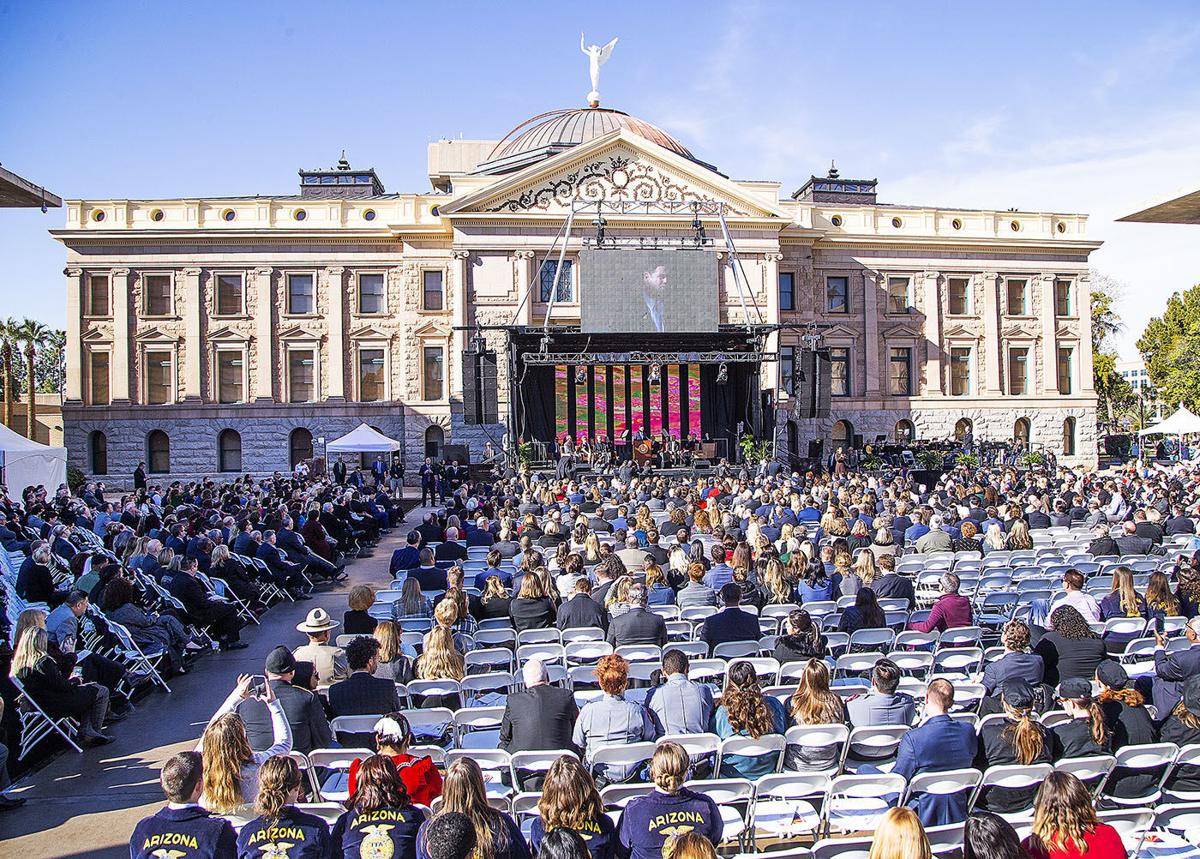 Gov. Doug Ducey told the crowd at his inauguration that the state will have “the largest projected budget surplus in a decade,” an amount estimated at $900 million.

PHOENIX — Gov. Doug Ducey used his second inaugural speech Monday to exhort lawmakers and others with a claim to Colorado River water to approve a drought contingency plan before a solution is imposed by the Bureau of Reclamation.

“It’s simple: Arizona and our neighboring states draw more water from the Colorado River than Mother Nature puts back,” the governor told his audience. “And with critical shortfall imminent, we cannot kick the can any further.”

Time is not on the state’s side.

Brenda Burman, commissioner of the Bureau of Reclamation, has said she will come up with her own plan to prevent a critical shortage on the river and at Lake Mead if Arizona and other states do not come up with their own acceptable proposal. And with Arizona essentially a junior partner in existing water contracts, this state has the most to lose.

A draft plan now being considered would leave more Arizona water in the river, replaced in part with supplies purchased from Native American tribes. And there also is a proposal — though yet to be funded — to allow Pinal County farmers to draw more water out of the ground to make up for some of the Colorado River allocation they will lose.

But there has been some balking, including among some state lawmakers who say they don’t want to be rushed into approving something they may regret later. There also are questions about dipping further into Pinal County’s underground water supply, which it could need for development.

Ducey, however, said those with concerns should take a lesson from what happened nearly four decades ago when the state was facing — and resolved — a similar threat of losing Colorado River water.

“Democrats and Republicans rose above party labels,” the governor said.

“They brought skeptical and reluctant stakeholders to the table,” he continued. “And they acted, and they did it with good faith and honest intentions.”

Ducey also used the opportunity to talk about what he believes is the progress of the state since he took office in 2015.

“Four years ago, we were broke,” he said. “I stand before you with the largest projected budget surplus in a decade.”

Legislative budget staffers are projecting that revenues will exceed spending this coming fiscal year by $900 million.

That financial situation, Ducey said, will enable the state to fulfill its promise of raising teacher pay by 20 percent over 2017 levels by 2020.

“But we’re not going on a spending spree,” he said.

“Whatever limited new spending we do will be smart and targeted and aimed at helping the people who need it most, so they can access the abundant opportunity that is Arizona,” Ducey continued. And he said he will reject any calls to raise taxes.

But Ducey also said he intends to put Arizona in a position “to be better prepared for the next downturn so it doesn’t become a calamity.”

What he did not say is that part of his contingency plan is to boost the state’s “rainy-day fund” with more than $180 million in additional taxes that will come out of the pockets of Arizonans. That’s the result of conforming state tax code to the changes that occurred last year in federal law.

Those federal law changes reduced or eliminated many deductions or subtractions. But it’s a net gain for most people because they will be able to take advantage of a much larger standard deduction.

Ducey’s plan, however, mirrors those smaller deductions — but without a compensating offset of higher standard deductions.

That proposal is going to get a fight from many lawmakers who say the reduction in federal individual income taxes was never meant to be a windfall for the state.

Ducey, in vowing no new taxes, also made no mention of a new $32-a-vehicle registration fee to fund the state Highway Patrol. That, in turn, allows him to divert up to $185 million of general fund dollars that had been funding the Highway Patrol to other uses.

But Ducey denies that amounts to a tax hike, calling it a fee increase.

The governor said his agenda includes bringing more qualified teachers into the classroom “and equipping every student with the know-how needed to succeed after graduation. He also vowed to protect public safety “while finding way to reverse the trend of far too many young men ending up behind bars.”

Ducey is likely to provide more details and more specifics this coming Monday when he gives his State of the State address to the Legislature.

He made no mention Monday of the national debate on immigration, legal and otherwise, but did cite the state’s relationship with Mexico and the state of Sonora in particular, recognizing Gov. Claudia Pavlovich, who came to the ceremony. He said, though, a priority is “recognizing the value of every American citizen, no matter where they came from.”

Here are the other state leaders sworn-in to office Monday:

A new law crafted in part by anti-abortion group requires doctors to ask women several questions, including whether the procedure is being sought because the pregnancy is due to rape or incest.

A legislative leader in governor's own party complains "it's a tax increase and the largest one in modern history.''

There's no route yet for the pipeline, which would move New Mexico's excess natural gas through Arizona to Sonora for sale to Asia.

Could result in some Arizonans having to file amended state returns once matter is settled by Legislature.

A clearly angry Gov. Doug Ducey lashed out at lawmakers from his own Republican Party.

He says those laws are providing incentives for people to seek asylum and creating a border crisis.

Gov. Doug Ducey, taking the oath of office, urged the Legislature to approve a plan to conserve Colorado River water. “Democrats and Republicans rose above party labels,” he said, referring to a similar agreement some four decades ago.

Gov. Doug Ducey told the crowd at his inauguration that the state will have “the largest projected budget surplus in a decade,” an amount estimated at $900 million.