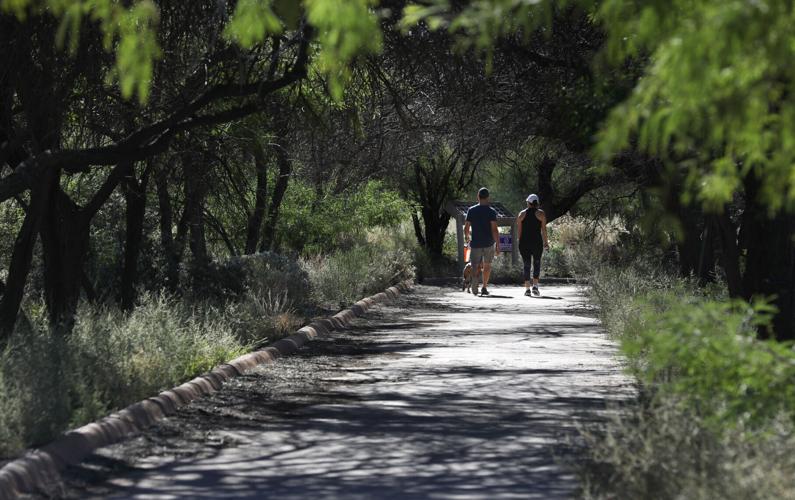 A couple walks their dog along the path that fronts the driving range at the abandoned Golf Club at Vistoso in Oro Valley. The property is set to become a desert preserve and community trail. 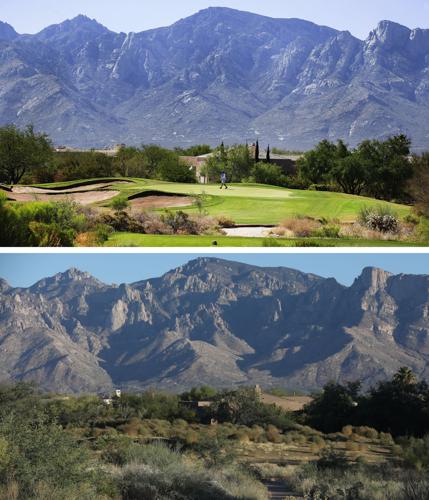 Then: A golfer retrieves his ball from the cup on the third hole at the Golf Club at Vistoso in May 2018, shortly before the course was closed. Now: By October 2021, there was little evidence that the third hole existed.

A neighborhood nonprofit group in Oro Valley has raised the $1.8 million it needs to turn the abandoned Golf Club at Vistoso into a nature preserve.

It took Preserve Vistoso just five weeks to reach its fundraising goal, thanks to contributions from more than 400 donors.

The money will be used to purchase 202 acres of the 18-hole golf course, which closed in 2018 amid rising water prices and sagging demand for tee times.

Preserve Vistoso and its partner, national nonprofit The Conservation Fund, hope to close on the property before the end of the year.

The land will eventually be turned over to the town of Oro Valley as a desert park and community trail, protected from further development by a permanent conservation easement.

“The key to the fundraising success was attributable to the financial support and generosity from the entire community,” said Mike Ford, Nevada and Southwest director for The Conservation Fund. “The overwhelming support is testimony to the importance of this effort.”

The golf course property features native desert plants and wildlife, sweeping views of the Catalina Mountains and scattered archaeological resources, including petroglyphs along at least one fairway.

The Golf Club at Vistoso opened in 1995 but later fell on hard times. Canada-based investment firm Romspen bought the Tom Weiskopf-designed desert course out of bankruptcy in 2015, only to close it for good three years later.

Conservation efforts heated up in March 2020, after Romspen announced plans to rezone the property and sell it off for residential or nursing-home development.

The proposal drew fierce opposition from nearby residents, so town officials stepped in to try to broker a different kind of land deal.

Romspen eventually agreed to sell the bulk of the course to the conservation groups — everything except a 6-acre tract already zoned for high-density development where the golf course’s parking lot, boarded-up clubhouse and restaurant now stand.

Preserve Vistoso and The Conservation Fund launched their fundraising campaign on Oct. 12 and hit the $1.8 million mark on Nov. 24, almost a month ahead of schedule.

“We could not have accomplished this so quickly without the involvement and generosity of so many people,” said Preserve Vistoso President Gayle Mateer in a written statement.

She went on to thank Ford, Oro Valley Mayor Joe Winfield, Vice Mayor Melanie Barrett, Town Manager Mary Jacobs, Town Attorney Jonathan Rothschild and other town staffers and council members who “listened to the voices of our community and made this deal happen.”

Ford said his group is now processing all of the donations and pledges, converting gifts of stock and other securities to cash and directing the proceeds into an escrow account.

“Upon closing, the property will be protected in perpetuity,” he said in a congratulatory email to Preserve Vistoso’s more than 2,000 members. “The Conservation Fund will become the interim owner, and we will continue working with the town of Oro Valley towards the eventual donation and transfer for long-term management and ownership.”

After several years spent stuck in the rough, an abandoned Oro Valley golf is now the Vistoso Trails Nature Preserve.

Plans for the closed golf course include a mix of single-family housing, casitas and a senior living feature.

Watch now: Family of bobcats spotted in Foothills back yard

Three bobcats were filmed Jan. 2 passing through the back yard of a home in the Catalina Foothills just before sunset.

Park Service to survey visitors after another record year at Saguaro

Saguaro National Park will survey visitors after posting its busiest year on record. The goal is to find out how many visitors are locals and how many are from out of town, as well as what other amenities they'd like to see.

The town of Oro Valley has launched a contest to pick the name for its new nature preserve where the Golf Club at Vistoso used to be.

As Oro Valley opens its new Vistoso Trails Nature Preserve, one nearby resident is finishing work on a field guide for more than 250 different plants and animals found there.

A couple walks their dog along the path that fronts the driving range at the abandoned Golf Club at Vistoso in Oro Valley. The property is set to become a desert preserve and community trail.

Then: A golfer retrieves his ball from the cup on the third hole at the Golf Club at Vistoso in May 2018, shortly before the course was closed. Now: By October 2021, there was little evidence that the third hole existed.