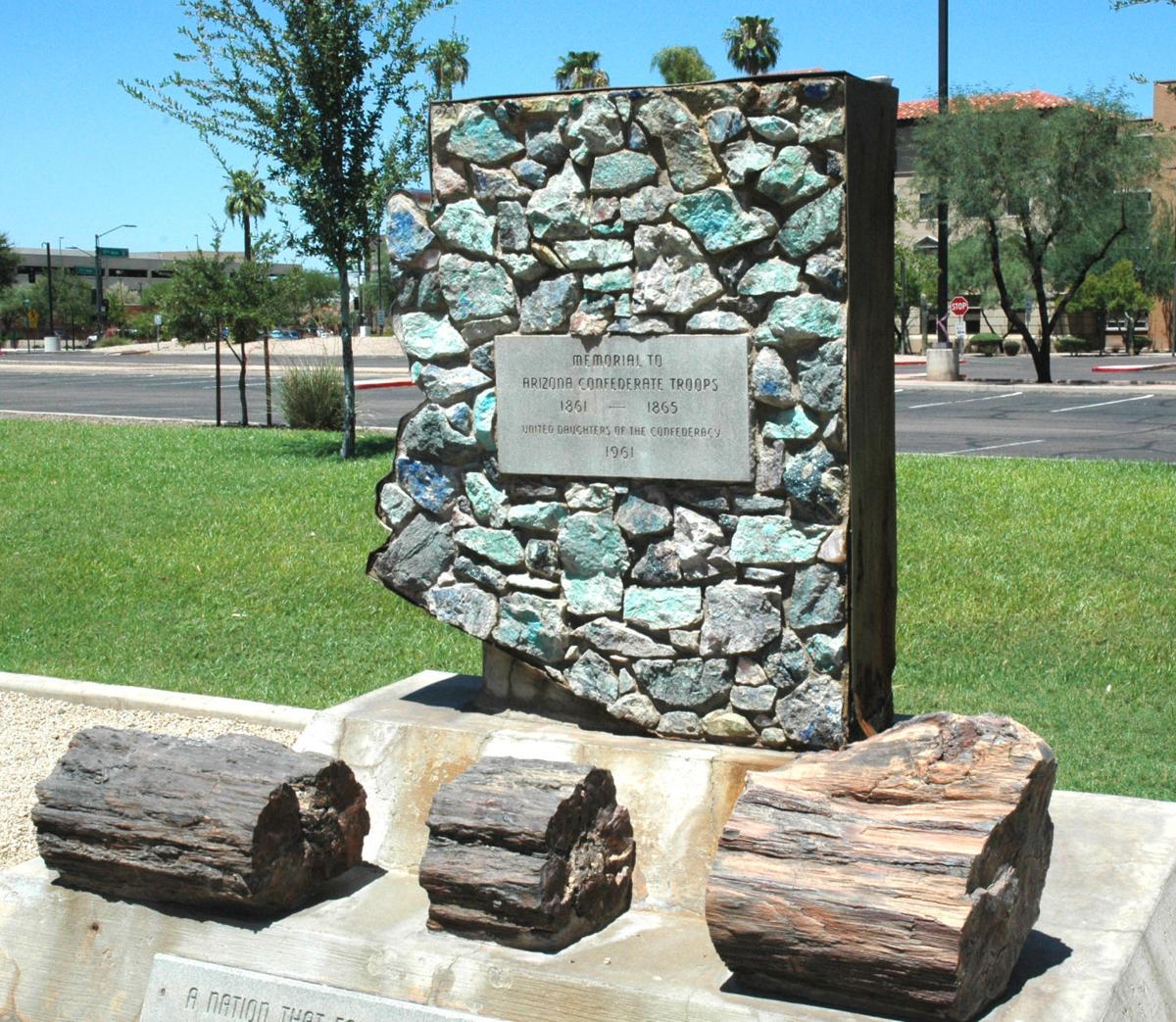 This memorial to Confederate troops was erected in 1961 by the United Daughters of the Confederacy, one of six monuments around Arizona. 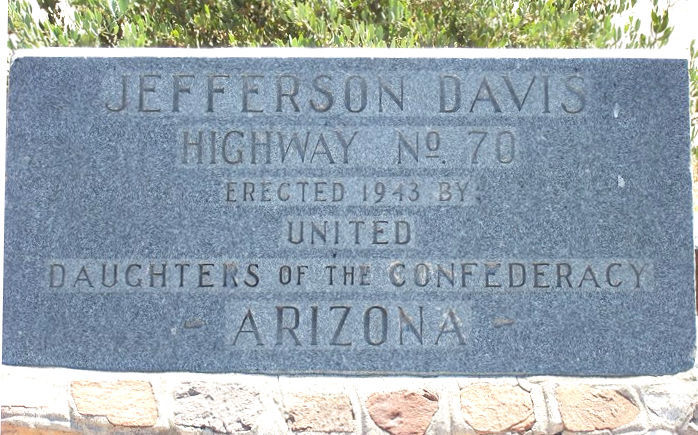 This monument sits near what has been named the Jefferson Davis Highway near Apache Junction.

PHOENIX — Gov. Doug Ducey condemned white nationalists after the weekend violence in Virginia, but said when asked that he has no interest in removing Confederate monuments on state land.

“It’s important that people know our history,” the governor told reporters Monday. “I don’t think we should try to hide our history.”

The governor, speaking after a publicity event in Buckeye, said he “100 percent condemned” groups like the Ku Klux Klan, neo-Nazis and white nationalists. Many of those groups were involved in the demonstration in Virginia Saturday that led to one sympathizer driving his vehicle into a crowd of counter-protesters, killing one and injuring 19.

Ducey said that 70 percent of Arizonans have moved here from somewhere else. “It’s a very welcoming place and I want to keep it that way,” he said.

“It’s not my desire or mission to tear down any monuments or memorials,” he continued.

Ducey also said that as governor he lacks the unilateral power to have any of the monuments removed. He said anyone who thinks it’s inappropriate to have monuments on public land to Confederate soldiers or to have a portion of a highway named after Confederacy President Jefferson Davis should take their case to the boards that can change them.

Members of both boards say they have gotten no such requests from the governor.

Ducey said he sees all this as “part of our history. We fought the Civil War and the United States won the Civil War,” he said. “We freed the slaves and we followed up with civil rights after that.”

The governor’s comments about preserving history drew derision from Rep. Reginald Bolding, D-Laveen. He said the call has never been to eradicate all monuments that mention the Confederacy.

“The call has been to move away from having any Confederate monuments that are on state property,” Bolding said.

“Any African-American and many other individuals should not be required to use our taxpayer dollars to keep up with the upkeep and maintenance of these memorials,” Bolding said. He said that would be comparable to having monuments on public lands to Nazi soldiers.

A memorial was placed across from the state Capitol in 1961 by the Daughters of the Confederacy, and a portion of U.S. 60 in Apache Junction has a road name and marker as Jefferson Davis Highway. Bolding said he also questions having a monument at Picacho Peak State Park, which was the site of the westernmost battle of the Civil War.

“The Confederates, they were terrorists of their times,” Bolding said. “These were people who were saying people who looked like me should not have equal rights, we should be slaves.”

“I believe the governor has the ability to exhibit influence and leadership,” he said.

Two panels are at issue: The Legislative Governmental Mall Commission, which decides what monuments go in the Wesley Bolin Memorial park across from the Capitol; and the Arizona State Board on Geographic and Historic Names, which can place official names on mountains, rivers and roads.

“He absolutely has the ability to pick up the phone and reach out to these chairs and have them call a meeting,” Bolding said of Ducey.

Bolding said that lobbyist Kevin DeMenna, who chairs the mall commission, told him months ago he would convene a meeting in July. “It’s August,” the lawmaker said. DeMenna did not return repeated calls to his office and cell phone seeking comment.

Dennis Preisler, who chairs the names board, said no one has approached him about the Jefferson Davis Highway issue. But Preisler said it wasn’t his board that approved it in the first place, noting that the name — and the monument placed alongside the road — date to 1943, decades before his board existed.

A spokesman for the state Department of Transportation, meanwhile, said it’s not within the purview of his agency.

There is also a monument to Confederate soldiers at the state-run Veteran Cemetery in Sierra Vista.

A spokeswoman for the Arizona Department of Veterans Services said it is in a section of the cemetery where remains of those who fought in the Indian wars and Civil War were reburied after being dug up in Tucson. She said there also is a monument there to Union soldiers.

She said the one for the Confederacy, erected by a Sons of Confederacy chapter, is engraved “In memorial to Arizona Confederate veterans who sacrificed all in the struggle for independence and the constitutional right of self government.” No Confederate soldiers are interred there, she said.

Monument at graves for the only Confederate soldiers killed in action in Arizona, Dragoon Springs stagecoach station

One is at Confederate graves east of Tucson.

Local groups discuss use of flag some see as symbol of racial hatred.

"If you don't know (the history) then you will have assumptions that black people were not part of the community," said Tani Sanchez.

They say Gov. Doug Ducey's assertions he has no role in deciding the future of Confederate monuments on state land appear not to be backed up by law.

His win at the U.S. Supreme Court in 1966 struck down Arizona's McCarthy-era loyalty oath for teachers.

The state's top transportation official says there's no need to rename the highway in Arizona — but state officials also aren't removing its marker.

Secretary of State Katie Hobbs is asking Gov. Doug Ducey's administration to remove a monument to the Confederacy from a state park next to the Capitol in Phoenix. Ducey has opposed "hiding our history" — but another state official with power to remove the monument now says he'll consider it.

Group asks Gov. Doug Ducey to remove four monuments and plaques dedicated to the Confederacy on state land. In a similar effort in 2017, Ducey defended them as helping people “know our history.”

Gov. Doug Ducey, who opposed past attempts to remove Confederate monuments from state property, announced late Wednesday that Arizona has agreed to remove and return two such monuments to the United Daughters of the Confederacy, at the group's request.

This memorial to Confederate troops was erected in 1961 by the United Daughters of the Confederacy, one of six monuments around Arizona.

This monument sits near what has been named the Jefferson Davis Highway near Apache Junction.