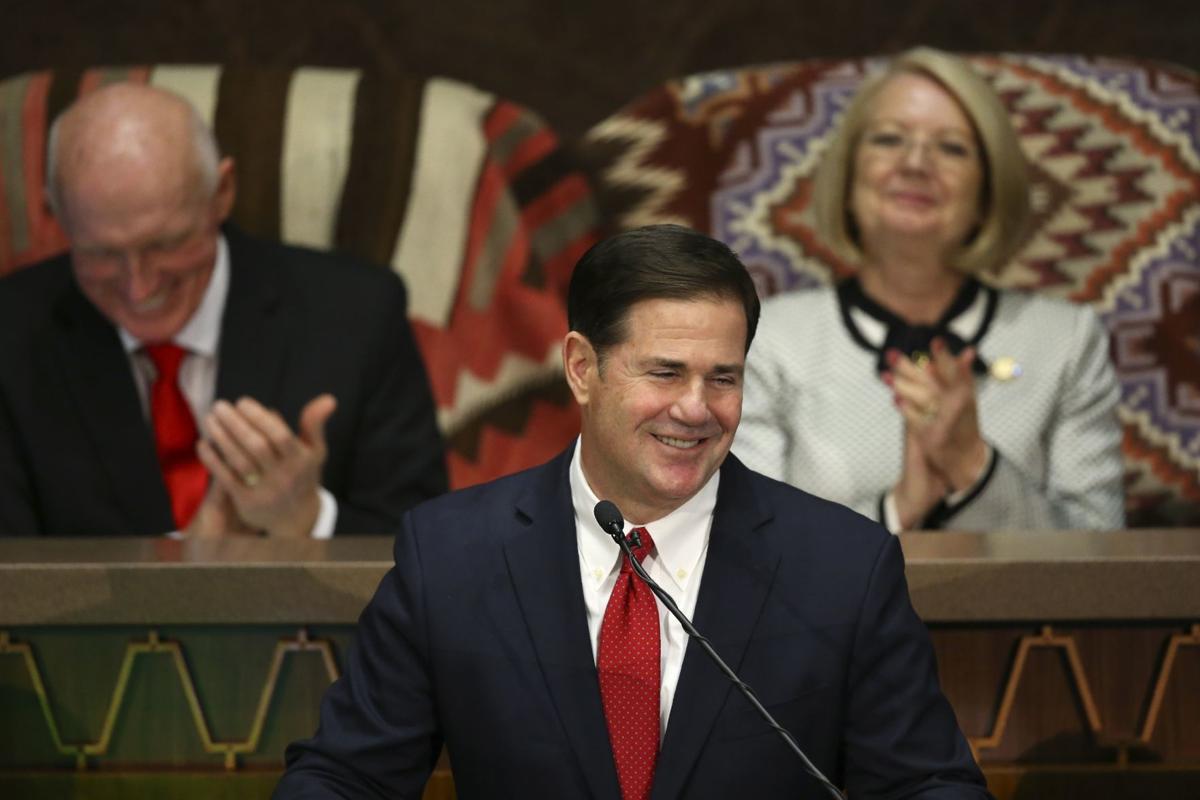 In his State of the State speech on Monday, Arizona Gov. Doug Ducey said he wants to close the state prison at Florence and move inmates elsewhere. He also proposed having the state pay for advance-placement exams for needy students. 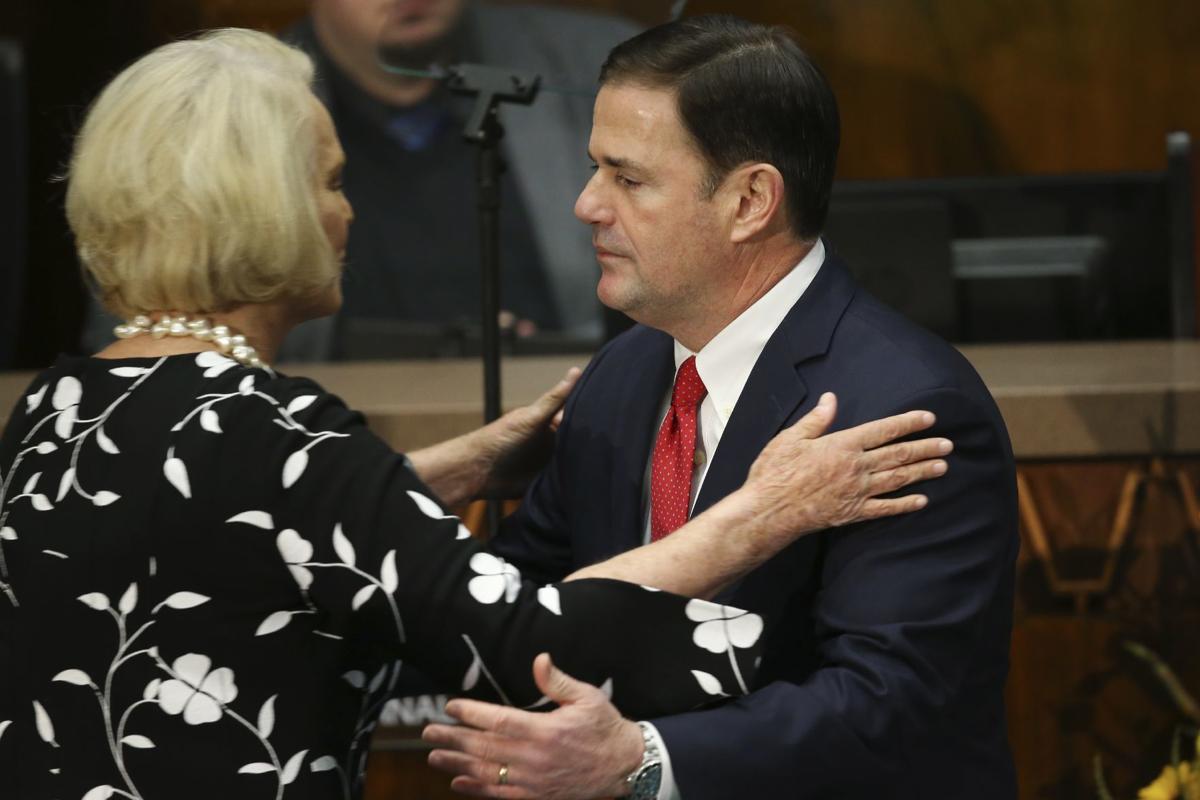 Ducey greets Cindy McCain, the widow of former U.S. Sen. John McCain, after delivering his speech on the opening day of the legislative session at the Capitol in Phoenix. 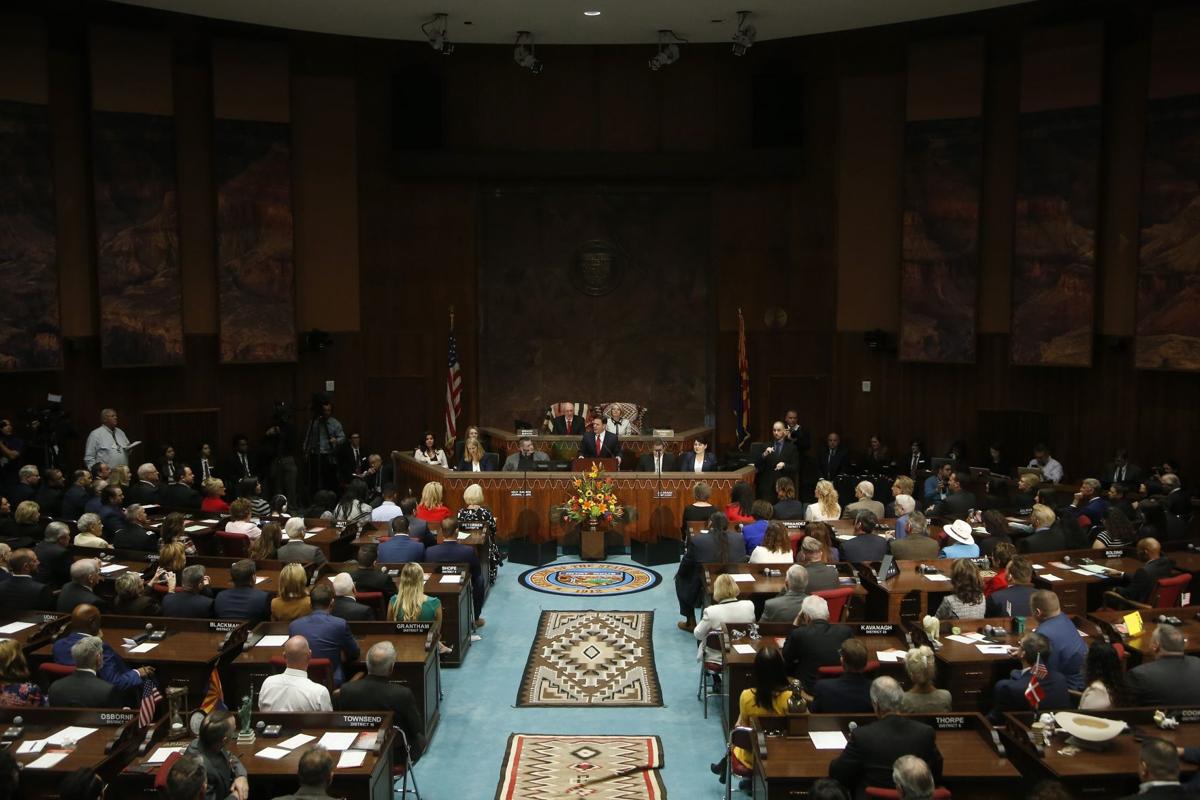 Arizona Republican Gov. Doug Ducey, back center, speaks during his State of the State address as he talks about Arizona’s economy, new jobs, prison reform, and education on the opening day of the legislative session at the Capitol Monday, Jan. 13, 2020, in Phoenix.

In his sixth annual State of the State speech on Monday, the Republican governor also said he wants to:

Close the state prison at Florence and move inmates elsewhere, including sending

And the lone proposal to create such a designation, which the governor called “troubling,” was soundly defeated last fall by Tucson voters.

But Ducey wants something more.

“Now it’s time for all Arizonans to make their voices heard, and enshrine it in our Constitution,” he said, saying Rep. T.J. Shope, R-Coolidge, will shepherd the measure in the Legislature. “This November, let’s give all Arizona voters the opportunity to say ‘yes’ to the rule of law and ‘no’ to sanctuary cities.”

Arizona took a public relations hit after lawmakers approved a 2010 law, known as SB 1070, aimed at giving police more power to detain people suspected of being in the country illegally. That included lost conventions and visitors.

Shope, however, said he doubts having the sanctuary issue on the November ballot will harm the state’s reputation.

“I think we’ve got too many good things going on here right now to have that kind of bad publicity,” he said. “It will do very well at the polls.”

But Rep. Daniel Hernandez, D-Tucson, who voted against the Tucson initiative last year, suggested there was something more sinister and political behind the proposal.

“It’s designed to create ‘wedge’ issues,” allowing Republicans to attack Democrats who may not have the same hard-line stance on immigration issues, he said.

Ducey’s proposed budget — his plans for state revenue and expenditures — won’t be released until the end of the week, but he provided lawmakers with a road map of what he wants done.

It starts with the tax cut for retired military.

When Ducey was inaugurated in 2015, he promised to annually propose reducing income taxes to “as close to zero as possible.”

However, the governor has never proposed an actual reduction in overall tax rates. The only change was pushed through last year by some GOP lawmakers.

Instead, Ducey has relied on targeted tax cuts. The new proposal fits that pattern.

“Our vets have already earned their benefits, put their lives on the line,” Ducey said.

But there is bound to be kickback from lawmakers who question not just the $45 million price tag but also whether all 600,000 Arizona veterans, at whatever retirement level, should not be required to pay state income taxes.

Current law exempts the first $3,500 of military retirees’ income from the state tax.

Last year Rep. Gail Griffin, R-Hereford, sought to boost that in three steps to $10,000. When that proved politically unacceptable, she agreed to a $1,500 boost.

Even with that change, however, a majority of legislators questioned the wisdom of the move.

“I support veterans,” said Rep. John Allen, R-Scottsdale. But he said the plan did not target its relief to “those who need our help.”

“We all respect and want to honor our veterans,” House Minority Leader Charlene Fernandez, D-Yuma, said after the speech.

“But I just keep thinking about how we could invest that in our public schools. I think our veterans would want us to invest in the next generation.”

Another provision of Ducey’s plan would eliminate fees to get state licenses for veterans and the spouses of active duty military.

Ducey also announced that he is renaming the state prison system to the Department of Corrections, Rehabilitation and Reentry, saying it “more clearly reflects the agency’s mission.” The governor also promised new pay raises for correctional officers and money to fix broken locks at several facilities.

But the big change is shuttering the state prison at Florence, where close to 4,000 of the state’s 42,500 inmates are now housed.

The issue, according to Ducey, is one of economics. He said it would take about $275 million to make repairs at the prison.

Aides to the governor said some inmates will end up in private prisons where the state pays a per-day rate. But they also said some could be transferred to other facilities, including the adjacent Eyman Prison.

And then there’s a plan to ask counties if they would take some inmates — for a fee.

Ducey’s plan to restore the “district additional assistance” funding is only part of what the governor is seeking for schools.

He also is proposing additional dollars for career and technical education.

There also is a request for more cash to provide counselors and police officers for schools that want them. And his budget will contain the dollars for the last step of the plan approved in 2018 to raise teacher salaries by 20% by the 2020-2021 school year.

Some of the proposals have no dollar cost.

He wants to designate Sept. 25 every year as Sandra Day O’Connor Day. On that day, every public school would devote all efforts to teaching about civics.

Ducey also wants to let students take the civics exam — required for high school graduation — at any point starting in middle school. Once a student passes there would be no additional bar to graduation.

The governor also said he wants more done about suicide, beyond the veteran community, saying it is the eighth-leading cause of death in Arizona.

Part of that would be a mandate in state law on private insurance companies to cover mental health “just like they cover an annual physical.” Aides to Ducey said that’s already required by federal law but is largely unenforced.

The proposal to finance the Gila River bridge along Interstate 10 is a down payment of sorts on proposals to eventually widen to three lanes the last stretch that is now two lanes in each direction. Ducey said 62,000 people drive over the 56-year-old bridge every day.

“The Phoenix-Tucson corridor is an economic artery for our state and needs expanding,” the governor said.

As for the request by Gila County officials for $20 million for a bridge over Tonto Creek where three children recently died, Ducey has so far only asked for federal dollars. Ducey also promised more focus on economic development in rural areas, including additional money for tourism promotion and for job training.

Some of what the governor announced does not require legislative approval. For example, he is directing state agencies that for any new rule or regulation they want to propose they must eliminate three.

But the governor would need changes in state law to scrap the current system in which members of professions have the majority of members on regulatory boards. He threw his support behind a proposal by Rep. Michelle Ugenti-Rita, R-Scottsdale, to require that a majority of each board be composed of public members.

Along the same lines, Ducey wants to forbid fee hikes by any regulatory board that has been “stockpiling cash and sitting on bank accounts of millions in reserves, all while continuing to burden real people with real fees.”

Rainy weather making its way to the Old Pueblo

Conditions will remain mostly clear in Tucson today but changes are coming over the next two days, the National Weather Service says.

Central to the issue is whether student athletes should be entitled to earn money, particularly in an age when universities make millions of dollars off their sports programs — and off the work of players whose total compensation is a scholarship.

Arizonans thinking about grilling a burger or a steak for Super Bowl Sunday should be prepared to dig deeper into your wallet.

Arizona's law will allow 2020 GOP candidates to be listed first on the ballot in 11 of state's 15 counties.

Legislative Democrats trotted out their plans Tuesday to reduce prison population in hopes that there are now enough Republicans — including the governor — to get at least some of them enacted.

In his State of the State speech on Monday, Arizona Gov. Doug Ducey said he wants to close the state prison at Florence and move inmates elsewhere. He also proposed having the state pay for advance-placement exams for needy students.

Ducey greets Cindy McCain, the widow of former U.S. Sen. John McCain, after delivering his speech on the opening day of the legislative session at the Capitol in Phoenix.

Arizona Republican Gov. Doug Ducey, back center, speaks during his State of the State address as he talks about Arizona’s economy, new jobs, prison reform, and education on the opening day of the legislative session at the Capitol Monday, Jan. 13, 2020, in Phoenix.