Ducey said the move, just two days after McCain was buried, was designed to be quick. In fact, the governor said Kyl was headed to the airport right after the press conference in hopes of getting sworn in as soon as possible.

How long Kyl will remain is unclear.

By law, he can serve through the 2020 election. And Ducey said he hopes that is the case.

But Kyl, 76 and a successful Washington lobbyist, was unwilling to make that commitment, at least at this time, vowing only to remain in Washington through the end of this congressional session, which can run through early January.

If Kyl quits, Ducey then would get a chance to name yet another senator, though the question of whether the governor wins another term in November could come into play.

Ducey would not speculate on that possibility, saying it is his intent that Kyl stay in place until 2020 when Arizona voters would have to elect someone to serve out the last two years of McCain’s original term. But it does create a possible path to the Senate for Martha McSally if she is defeated in November in her race against Democrat Kyrsten Sinema for the seat being vacated by Jeff Flake.

In any event, Ducey took himself off the short list of potential future senators.

The announcement comes less than a week after Rick Davis, McCain’s former campaign manager, said he thought that his former boss would have liked to see his seat filled by a Hispanic woman. Instead he got an older white male who previously served in Congress for 26 years, 18 of those in the Senate.

“I wanted to pick the best possible person regardless of politics,” Ducey said.

“There is big work to be done in the United States Senate,” the governor continued. “No one in the state of Arizona has the stature of Jon Kyl.”

Kyl said he has no illusions about replacing McCain with whom he served together for nearly 20 years. And Kyl has repeatedly said he had no problems with McCain, who technically was the state’s junior senator, taking the limelight with high-profile issues while Kyl said he liked to work behind the scenes.

As to how long Kyl is willing to stay, that’s still up in the air.

“The governor asked me to serve for the remainder of the term,” Kyl said. “And he’s made some very convincing points.”

Kyl made it clear he has no intent to seek to keep the seat — or run for any other office — in 2020. Instead, Kyl said he is focused on hitting the ground running.

There is much unfinished business on the Senate’s calendar, including confirmation of President Trump’s nominees.

The governor acknowledged that pending vote on Kavanaugh was one key reason he tapped Kyl.

“Over the last few months, Sen. Kyl has been working closely with the White House on the Senate confirmation of President Donald Trump’s nominee to the U.S. Supreme Court,” Ducey said. That refers to the president tapping Kyl to escort Kavanaugh to meetings with senators ahead of the hearings.

“Now, Sen. Kyl can cast a vote for Kavanaugh’s confirmation.”

But the governor said there’s more to his appointment of Kyl than simply providing a guaranteed vote for Kavanaugh in a Senate where Republicans hold a 51-49 advantage. He said Kyl has a history of being able to work with Democrats “to get results.”

“He’s an expert on the matters facing Arizona: water, land use and issues facing our Native American communities,” Ducey said.

And, from Ducey’s perspective, Kyl offers something else: an ability to walk right into the place.

The appointment is a safe one for Ducey, and not only because Kyl has been repeatedly elected. Kyl also has strong and long-term links to the business community and that wing of the party.

In fact, Kyl started his political career working for the Greater Phoenix Chamber of Commerce, roaming the halls of the Arizona Legislature to line up votes for business-backed bills. Since 2013, Kyl has been at the lobbying firm of Covington & Burlington, a firm whose clients include defense contractors and pharmaceutical companies, all industries that have issues likely to come before Congress.

Like McCain and Flake, a congressman at the time, he did support some ability of those here illegally to get legal status. But Kyl’s plan would have required those seeking a path to citizenship to first return to their home country, a proposal that proved both politically and logistically unworkable.

But he also was a proponent of increasing federal aid to Mexico as a trade-off for that country doing more to stem the flow of its citizens up north.

Kyl also was a foe of same-sex marriage, at one point proposing a federal constitutional amendment to define marriage as solely between one man and one woman. On environmental issues, Kyl opposed the decision by President Clinton to name new national monuments in Arizona.

The appointment has the apparent support of McCain’s family.

In a statement online, Cindy McCain called Kyl “a dear friend of mine and John’s.” And McCain, at one point considered a possible replacement, called it “a great tribute to John that he is prepared to go back into public service to help the state of Arizona.”

And in her own post, Meghan McCain said, I can think of no one better to keep fighting for the country and state he held so dear.”

The appointment drew generally predictable statements of support. Of note was the mention of Kyl being an abortion foe.

Congressman Andy Biggs cited Kyl’s “pro-life track record.” And Cathi Herrod, president of the anti-abortion Center for Arizona Policy said she has worked closely with Kyl on many issues.

Former state Attorney General Grant Woods was a bit less exuberant in his support, saying the appointment “makes perfect sense for Gov. Ducey.” And while Woods said he has always appreciated Kyl’s service, he sounded a note of caution about the former senator’s highly partisan record.

“This is not a Republican seat,” said Woods, who was McCain’s first chief of staff when he went to Congress. “It is Arizona’s seat and I will look forward to seeing John McCain’s philosophy of Country First exhibited every day.”

Hundreds brave heat in Phoenix to pay their respects to Sen. John McCain

PHOENIX — Hundreds of people paid their respects to U.S. Sen. John McCain on Wednesday, standing for hours in the broiling Arizona sun before …

He served Arizona, and the country.

But Kyrsten Sinema, who defeated McSally for Arizona's other seat, will be sworn in first as Arizona's first woman senator. 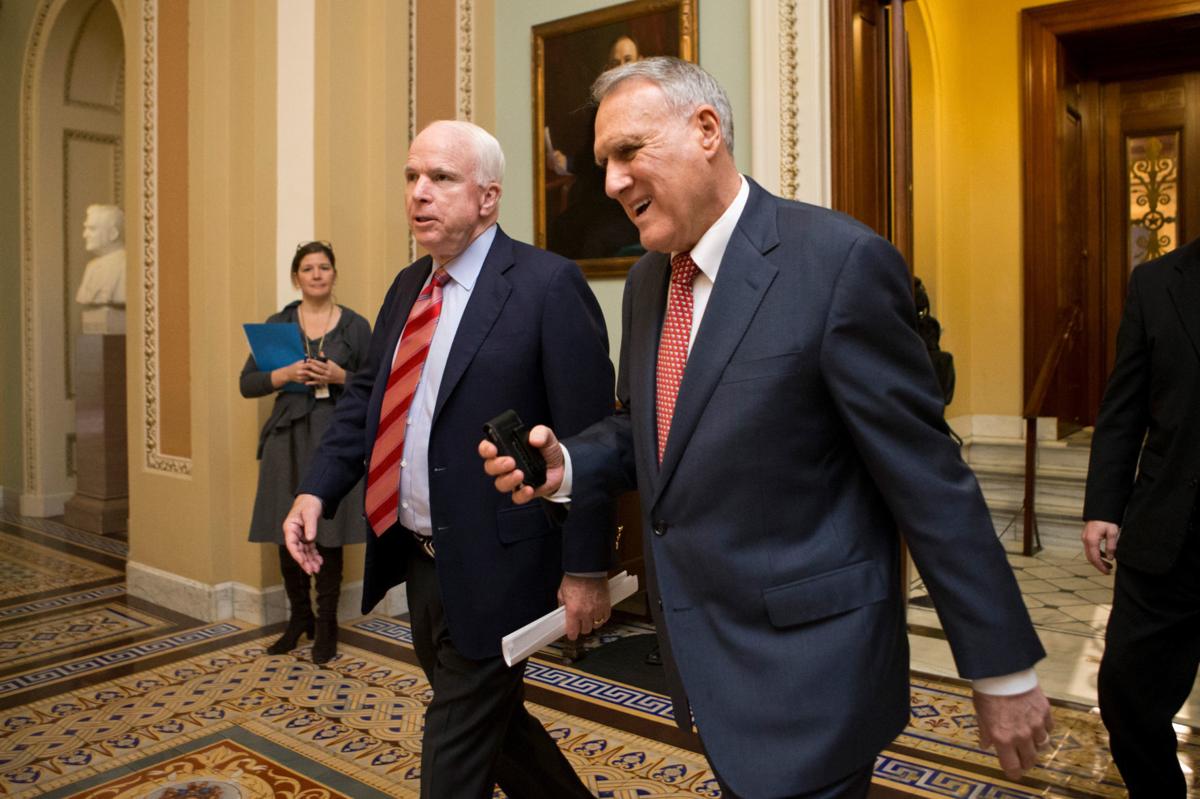 Jon Kyl, right, and John McCain served together for nearly 20 years in the U.S. Senate. Kyl is taking over McCain’s seat but says he has not made a commitment to hold it beyond the end of the congressional session. 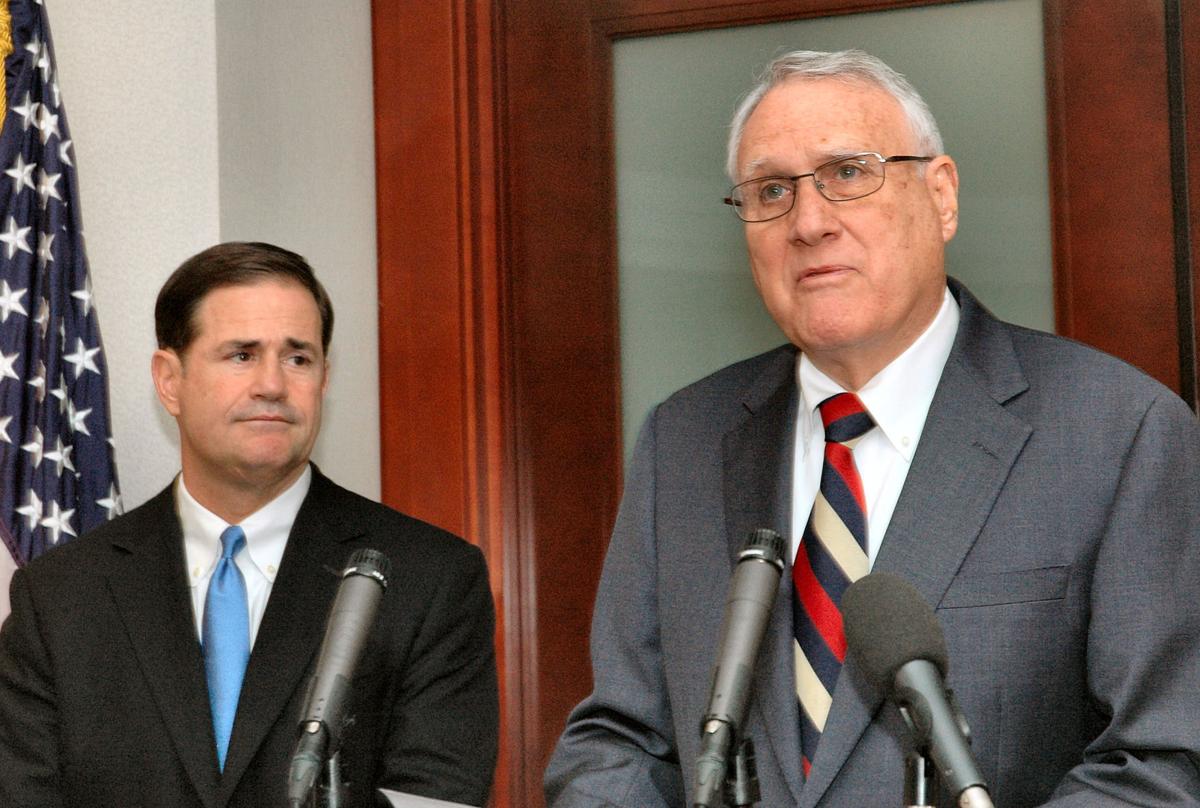 Once and future Sen. Jon Kyl answered questions Tuesday about being named by Gov. Doug Ducey to replace John McCain, at least through the end of this congressional session. 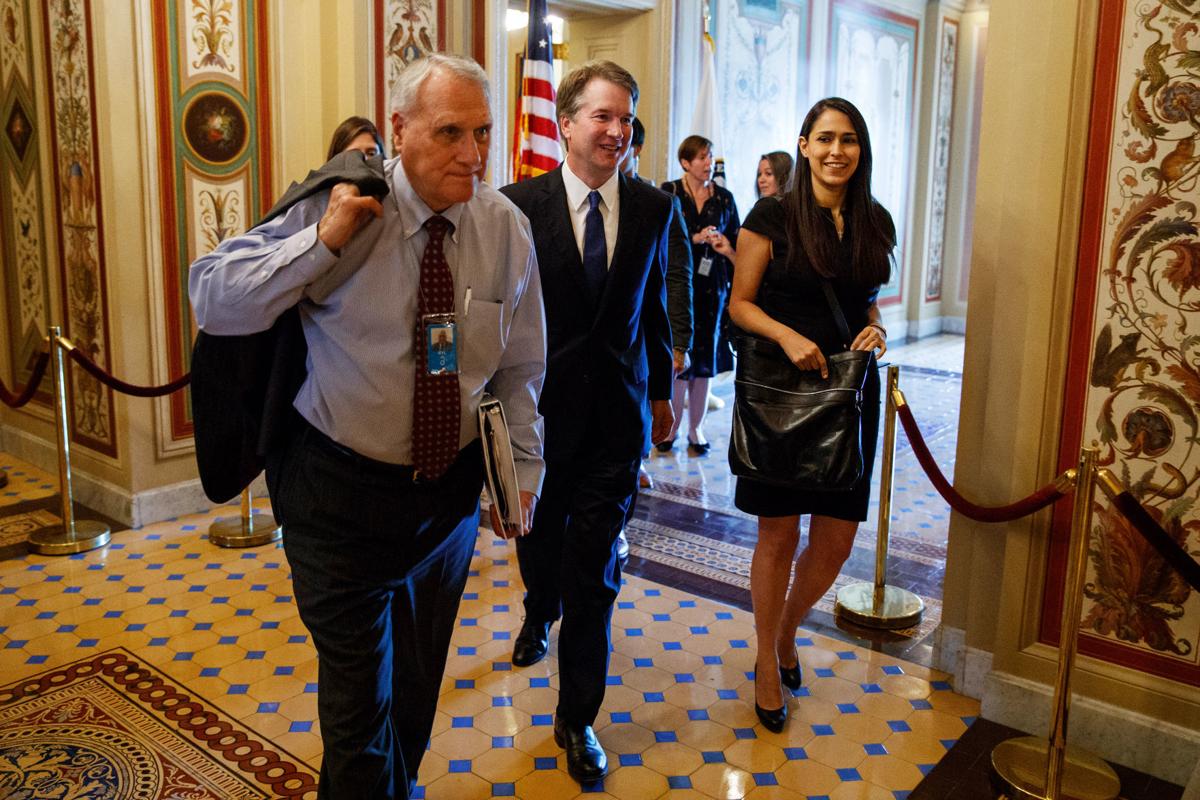 Jon Kyl, left, was an escort for Supreme Court nominee Brett Kavanaugh to meetings with senators earlier this year, ahead of Kavanaugh’s hearings.