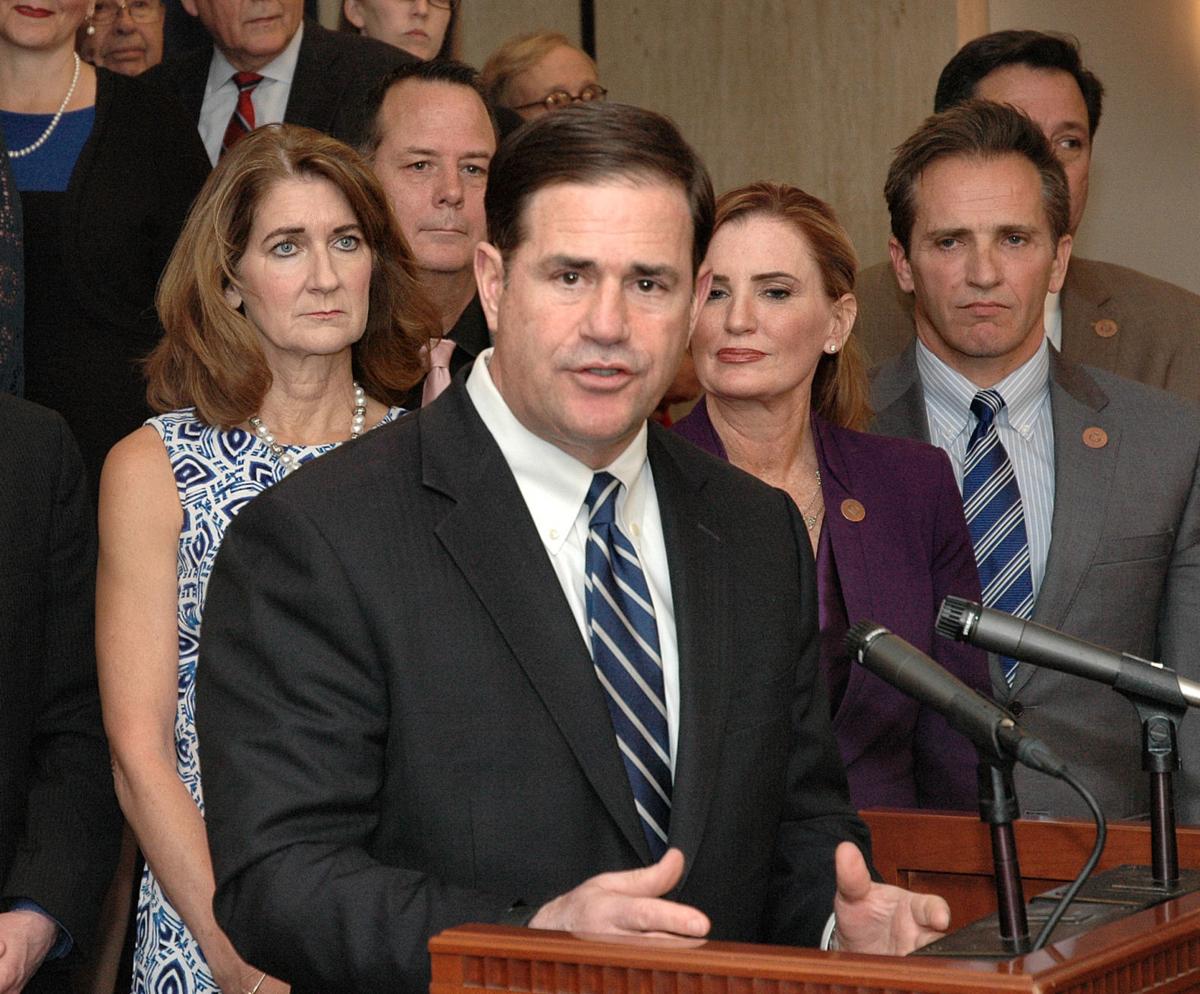 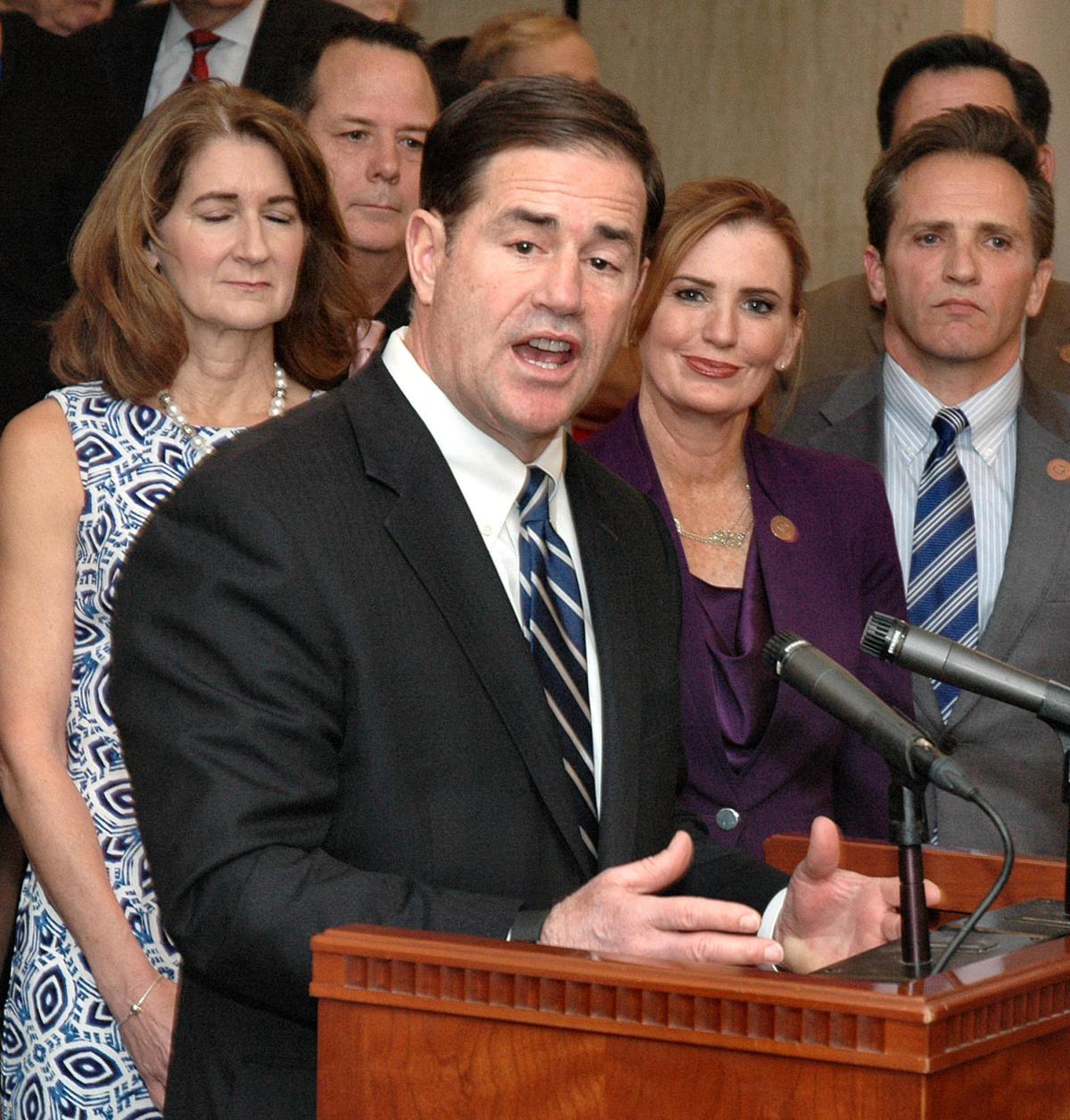 Flanked by Republican lawmakers, Gov. Doug Ducey unveiled his plan Thursday to boost teacher pay by 20 percent by the beginning of the 2020-2021 school year.

PHOENIX — Hoping to head off a walkout, Gov. Doug Ducey unveiled a plan Thursday that he said will provide teachers the 20 percent pay raise they are demanding — by the 2020-2021 school year.

The governor said he believes there are enough new tax dollars coming in the state through economic development and population growth to immediately bump the average teacher salary in Arizona by 9 percent to $52,725 by the new school year that starts in August. That compares with $48,372 now, according to the Auditor General’s Office.

It’s actually a 19 percent hike over current wages, as the governor is counting the 1 percent raise teachers already got this year.

The infusion of $684 million in new funding by 2020, on top of other state aid to schools, would still leave teacher pay in Arizona below the current national average. But it would mean Arizona would no longer be at or near the bottom, where it is now.

The key groups involved are adopting a wait-and-see attitude.

Most crucial will be the reaction of Arizona Educators United, the newly formed loose-knit group of more than 40,000 teachers and staff workers that has been behind recent demonstrations that aroused public support and put pressure on the governor.

Derek Harris, one of the organizers, said Thursday night that members remain skeptical, particularly as Ducey has yet to identify exactly where he intends to get the money.

“Right now it’s just words,” Harris said. “He can promise all he wants.”

One thing clearly missing, he said, is additional money for support staff.

“We’re ‘Arizona Educators United,’ not ‘Arizona Teachers United,’” Harris said. He said there are thousands of people working at schools whose presence is necessary for education.

“They’re our teammates,” he said. “We can’t go back to work and look at the health assistant and the cafeteria worker and say, ‘Hey, my pay is great; sorry you’re still making minimum wage.’ ‘’

Joe Thomas, president of the Arizona Education Association, said he is approaching Ducey’s proposal with a certain skepticism.

Thomas said even if Ducey can deliver on the immediate raise, there is no guarantee that the money will be there in future years. He said the only way to assure that is to put a tax increase proposal on the ballot, which the governor has refused to do and considers unnecessary.

Thomas, whose organization already is backing Democrat David Garcia to replace Republican Ducey in November, also said he lacks trust that the governor will do what he promised.

“Remember, this is the same governor that offered 2 percent over five years,” Thomas said, referring to Ducey’s original pay increase plan a year ago.

Others also are keeping watch for details.

“It’s an idea worth being optimistic about,” said Dawn Penich-Thacker, spokeswoman for Save Our Schools. “If it really materializes, that’s a good enough gesture to keep working on everything else that needs to be done,” she said.

Hers is the group of teachers and parents which gathered enough signatures to force a public vote on the Legislature’s 2017 decision to spend more tax dollars to help children go to private and parochial schools.

The governor has sharply changed his position.

Just two days earlier, Ducey said he was sticking with his plan to give teachers a 1 percent pay increase for this coming year. He accused leaders of Arizona Educators United and the Arizona Education Association of “playing politics.”

But the governor has been overwhelmed by events — and specifically tens of thousands of teachers staging “walk-ins” Wednesday at more than half of the state’s public schools as a show of support for the 20 percent demand.

The walk-ins also were designed to show that, like counterparts in West Virginia and Oklahoma, Arizona teachers would consider a strike.

At his hastily called news conference Thursday, Ducey said he has been working on the teacher pay issue “for some time.”

But he added, “I have been paying attention to what’s going on out across the state. I’ve been listening, and I’ve been impressed.”

House Minority Leader Rebecca Rios, D-Phoenix, said the governor’s hand was forced. “It’s amazing what a threatened teacher strike in an election year can do,” she said.

The governor’s plan comes on the heels of House Speaker J.D. Mesnard, R-Chandler, crafting his own proposal for a 20 percent pay raise for teachers.

But Mesnard’s plan would not get teachers there until the 2022-2023 school year.

Potentially more significant, Mesnard would pay for it largely by diverting funds from the “district additional assistance” account — money schools are counting on for other needs, such as computers, books and buses.

That, according to school officials, is a nonstarter.

“The Legislature’s plan is terrible,” said Chuck Essigs, lobbyist for the Association of Arizona School Business Officials. In fact, he pointed out that various education groups are now in court suing over the failure of the state to provide those funds in prior years.

Ducey did not mention Mesnard’s proposal, at least not directly, as he said his plan does not divert other education dollars.

“There will be no shell game,” the governor said.

Mesnard, who was at Ducey’s news conference, said he needs more details of exactly where Ducey intends to get the money. But Mesnard agreed with the governor that the current plan — a 1 percent raise for the current year — was not going to cut it.

Ducey, who had until recently insisted he was putting as much as he could into education, suddenly found new cash.

“Arizona’s economy is growing,” he said Thursday. “And with a growing economy comes more revenues.”

But Ducey also said some of the priorities he laid out at his State of the State speech in January also are being thrown overboard.

One appears to be a promise to retired service members to increase the amount of their pensions they can exempt from state income taxes, from $2,500 now to $10,000. That proposal has a $15 million price tag.

Also at risk could be Ducey’s plan to spend more money on law enforcement to go after motorists who drive the wrong way on freeways.

The governor said he also can find cash through “strategic efficiencies” in state government.

Pima County schools may have to repay $36 million due to Prop. 123 ruling

Governor pushes back, reaffirms commitment to education and teachers.

Flanked by Republican lawmakers, Gov. Doug Ducey unveiled his plan Thursday to boost teacher pay by 20 percent by the beginning of the 2020-2021 school year.