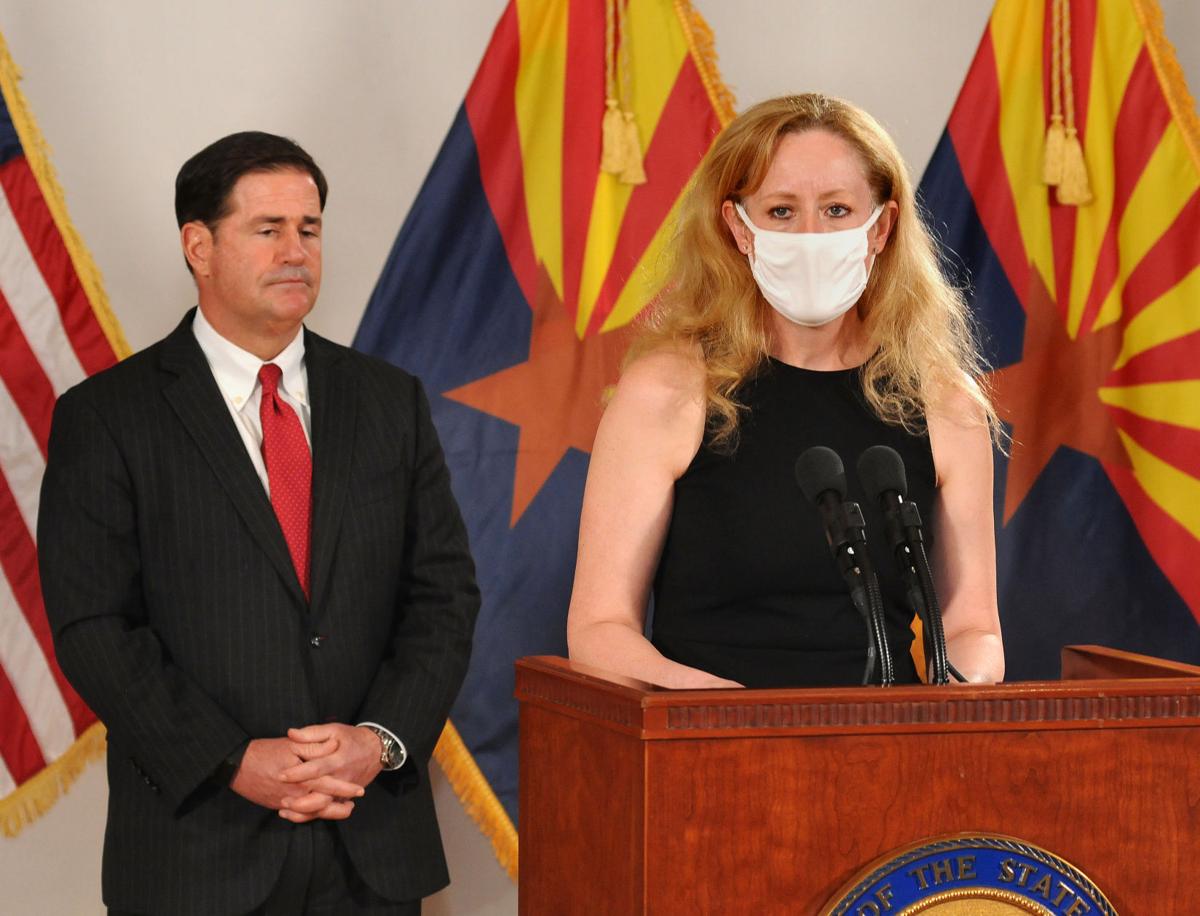 Dr. Cara Christ wears a mask while answering questions at a press briefing Monday, while Gov. Doug Ducey looks on.

“I think we’ve done a really good job of getting the message out on the importance of mask wearing,” Dr. Cara Christ said at a press briefing.

“There are circumstances where it may be safe to not do that,” Christ said, in response to questions about Ducey’s activities last week on the White House lawn.

Christ several times on Monday said the same protocols about covering up are necessary to protect Arizonans as the state enters flu season. Arizona had its worst flu season ever last year.

Even Ducey, asked about his activities, acknowledged the message.

“I want people to wear a mask,” he said. “I’ve been consistent on this.”

And what about last week?

“People can exercise their First Amendment rights, whether it’s a protest or a political event, which is what I was at,” Ducey said. Anyway, he said, it “happened to be outdoors.”

Ducey said that when he is indoors, he wears a mask. That includes grocery stores, businesses, places he cannot socially distance, and “when I’m in the office.”

Ducey also took off his mask after arriving to speak at a press briefing Monday in Phoenix, but said he had a reason. “I’ve heard from the deaf community that in addition to our skilled sign folks that they sometimes read lips,” he said.

“So, as a courtesy to them, while I’m answering questions I’m going to have the mask off.Then I’ll put it on. And I’ll exit,” he said.

Christ, by contrast, kept her mask on while answering questions ta the event.

What to Know About Omicron

With coronavirus cases at lowest totals since May, officials 'anxious' about student-caused jump

Pima County has moved into the state's "moderate" status for business reopening.

The state is also offering a $10 gift card as an incentive for the 1.8 million people in the Arizona Health Care Cost Containment System, the state's Medicaid program, to get vaccinated against the flu.

Across Pima County, 21,286 cases of coronavirus have now been confirmed, up 65 cases from the day before.

Arizonans with driver's licenses expiring in 2020 get year extension

Gov. Doug Ducey on Tuesday extended an earlier executive order that eliminates the need for Arizonans to visit Motor Vehicle Division offices to renew their licenses during the pandemic.

An extra $300 in benefits currently being paid out by the federal government are expected to run out within a matter of weeks, however, Arizona Gov. Doug Ducey has no plans to have the state step in and try to make up even part of the difference.

Dr. Cara Christ wears a mask while answering questions at a press briefing Monday, while Gov. Doug Ducey looks on.