PHOENIX — Arizona public schools will close for at least the next two weeks.

Gov. Doug Ducey and state schools chief Kathy Hoffman said on Sunday they do not want schools to open on Monday.

The closure will run through at least Friday, March 27, when the pair said they plan to reassess.

Several districts, like the Tucson Unified School District, are on spring break, so students were already off this week.

In an open letter to families and educators, Ducey and Hoffman emphasized that the closure will address only “operational issues.”

“Doing this will not stop the spread of COVID-19,” the governor and schools chief said.

“The safest place for children during this time is at home. They should not be cared for by elderly adults or those with underlying health conditions, including grandparents and other family members.”

The issue of what options parents who cannot stay home have during the closure was only tangentially addressed.

“For families for whom that is not an option, we are coordinating with partners in the nonprofit, faith-based and education communities, including the Boys and Girls Clubs and the YMCA, to make available child-care options to families who need it,” Ducey said in a separate online video he made with Hoffman.

No specifics were provided.

Sunday’s decision came less than a week after state Health Director Cara Christ suggested that closing schools was not a good option. She said it was better for children to remain with others rather than end up elsewhere, mixing with other children and potentially spreading the disease even further.

The governor had no explanation as to why that argument no longer makes sense in his mind.

Ducey also was facing pressure from another front.

Earlier Sunday, Arizona Education Association President Joe Thomas sent a letter to the governor saying his organization was calling for students to remain home “until education leaders and state policymakers can present a detailed plan of support that assures students will be returning to safe classrooms and healthy school sites.”

“While any school closure can be disruptive, it is reckless to pretend we are sending our teachers, staff and students into safe environments Monday morning,” Thomas wrote.

“Arizona needs time to assess how healthy our schools can be and what the rest of the school year will look like for our students. We must act now for all our safety.”

In some ways, the joint announcement was anticlimactic.

Officials in dozens of school districts already had reached the same conclusion.

Ducey’s move just makes it official — and covers the more than 200 school districts and charter schools across Arizona.

The pair said they were in no rush to issue such an edict.

“We’ve worked hard to keep our school doors open,” the announcement said. “These are important assets in people’s lives and many families rely on them for nutrition and access to health care.”

What changed, they suggested, was the developing situation concerning the coronavirus.

“Staffing and potential absences are a concern in many districts,” the announcement said.

“This decision was not made lightly,” Ducey said in the video explaining the action. “But it’s the right thing to do to bring certainty and consistency to all Arizona schools.”

Some of what will happen now is up to individual districts.

None of Tucson’s school districts had announced closures before the governor’s directive, but six of Tucson’s nine major school districts were scheduled for spring break this week. And at least three Tucson schools had already decided to temporarily shut their doors and go to online lessons due to the pandemic — private schools San Miguel Catholic High School and Salpointe Catholic High School and charter school Khalsa Montessori.

“The Tucson Unified School District supports and will comply with Gov. Ducey and State Superintendent Hoffman’s call to close all of Arizona’s public schools until March 27,” Trujillo said.

TUSD has called an emergency board meeting for Wednesday, March 18, to discuss closing the district for at least one week following spring break.

Trujillo said the extra week of closure after spring break will give TUSD time to get a plan up and running to disinfect schools and deliver food to students in an extended closure.

Trujillo said he had been on the fence about closing schools because that meant thousands of young people would still be congregating in public rather than in school.

He also was hesitant to put the district’s many employees out of work without an executive order to close.

The state’s announcement said it is working with the U.S. Department of Agriculture to allow schools to begin “summer food service operations,” providing boxed meals as needed. Parents were told to get specifics with local schools.

Also not yet decided is the effect on employees, both teachers and classified staff ranging from cafeteria workers to bus drivers.

“We’re working together to make sure you don’t see any disruption to your pay,” the announcement said. “We’ll also be consulting with our district and legislative partners to determine the extent of any makeup days.”

Also unclear is what happens to statewide achievement tests that were scheduled. The tests are linked to federal aid.

“We’re currently engaging with our federal partners in the event that we need to secure a waiver,” the pair said.

The announcement also urged school officials to make plans for what happens when school resumes to ensure “a safe learning environment.”

Some of that involves issues like “social distancing,” the idea of keeping students separated from each other to the extent possible. That, however, could prove difficult in classrooms given that the Centers for Disease Control and Prevention suggest a 6-foot margin.

Other post-reopening measures include regular intervals for administrators to wash and sanitize their hands as well as guidance on how to properly and frequently sanitize equipment and surfaces.

“We all have a role in confronting the impact of COVID-19,” Ducey said in the video. “We’re going to act together and we’re going to get through this together.”

Families can access hundreds of children's titles for free from their smart phones, tablets or computers with a library card.

The meeting Monday will be open to select business leaders, but not the public.

The crash happened on March 8 in the area of East Broadway and North Swan Road.

The crash happened in the area of East Fairmount Street and North Woodland Avenue, near East Speedway and North Craycroft Road.

Beginning Tuesday, March 17, all city recreation centers and aquatics facilities will be closed through the end of March, the Tucson Parks and…

The Community Foundation for Southern Arizona created the funds, chipping in $10,000 to ensure that critical services continue without interruption.

Reid Park Zoo remains open but all presentations, as well as certain visitor amenities, are closed to limit traffic in high-touch areas and to…

Arizona House members can now vote remotely but it's controversial

The House enacted a remote-voting plan that Democrats contend is designed largely to protect the GOP majority.

Despite lack of direction from the state, Tucson-area schools jump to action to feed children in need

Days after the state called for an emergency shutdown of K-12 schools, district leaders are waiting on guidance on how to serve families in need and other critical matters.

TUSD prepares to head back to school — virtually — amid coronavirus outbreak

Tucson's largest school district is working to assess the digital needs of its students while also finding ways to ensure employees are paid during the K-12 closures.

They were moving late Thursday to adopt a no-growth budget to ensure Arizona government keeps operating during the health emergency.

Magistrate Judge Bruce Macdonald ruled it was wrong for the government to conclude that Michael Ely did not meet the legal requirements to be considered the survivor of James A. Taylor even though they had not been married at least nine months. 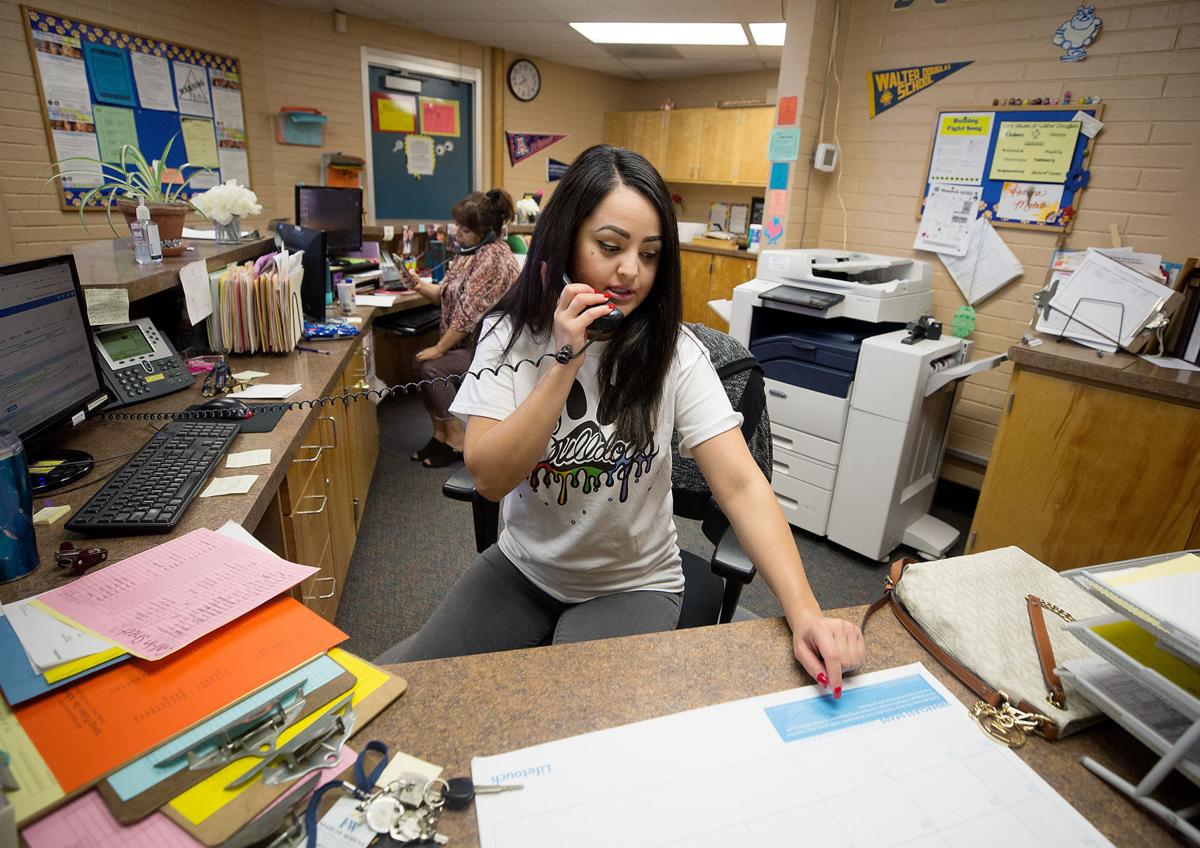 Brittany Ramirez, an attendance clerk at Walter Douglas Elementary School, fields a phone call from a parent checking to see if the school is closed on March 16, 2020. Gov. Doug Ducey ordered all K-12 schools in Arizona closed for two weeks. 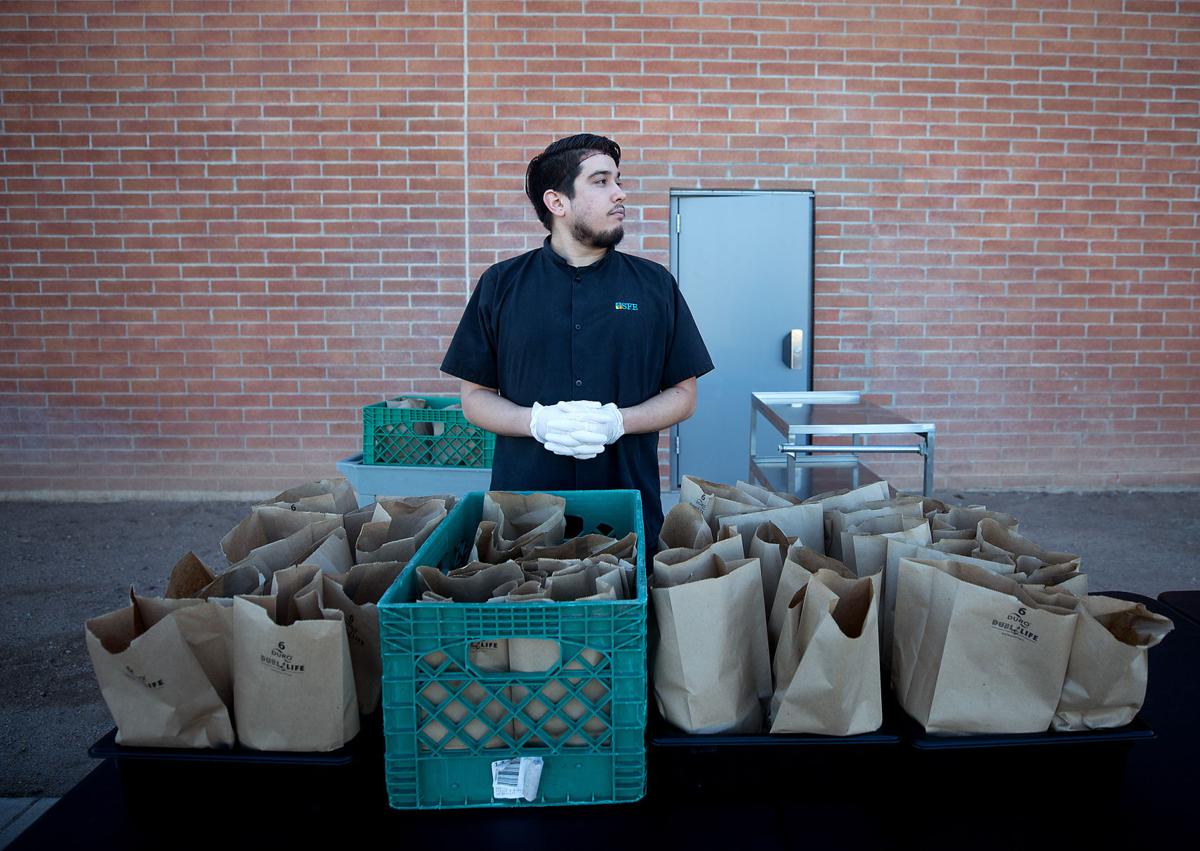 Josue Mora, cafeteria manager at Walter Douglas Elementary School, stands outside with breakfast meals and lunches for any students to come and pick up on March 16, 2020. Gov. Doug Ducey ordered all K-12 schools in Arizona closed for two weeks. According to Carl Thompson, director of dining services, breakfast and lunch bags can still be picked up at Flowing Wells schools on Tuesday. After that the district will identify areas where parents can pick up breakfast and lunch.