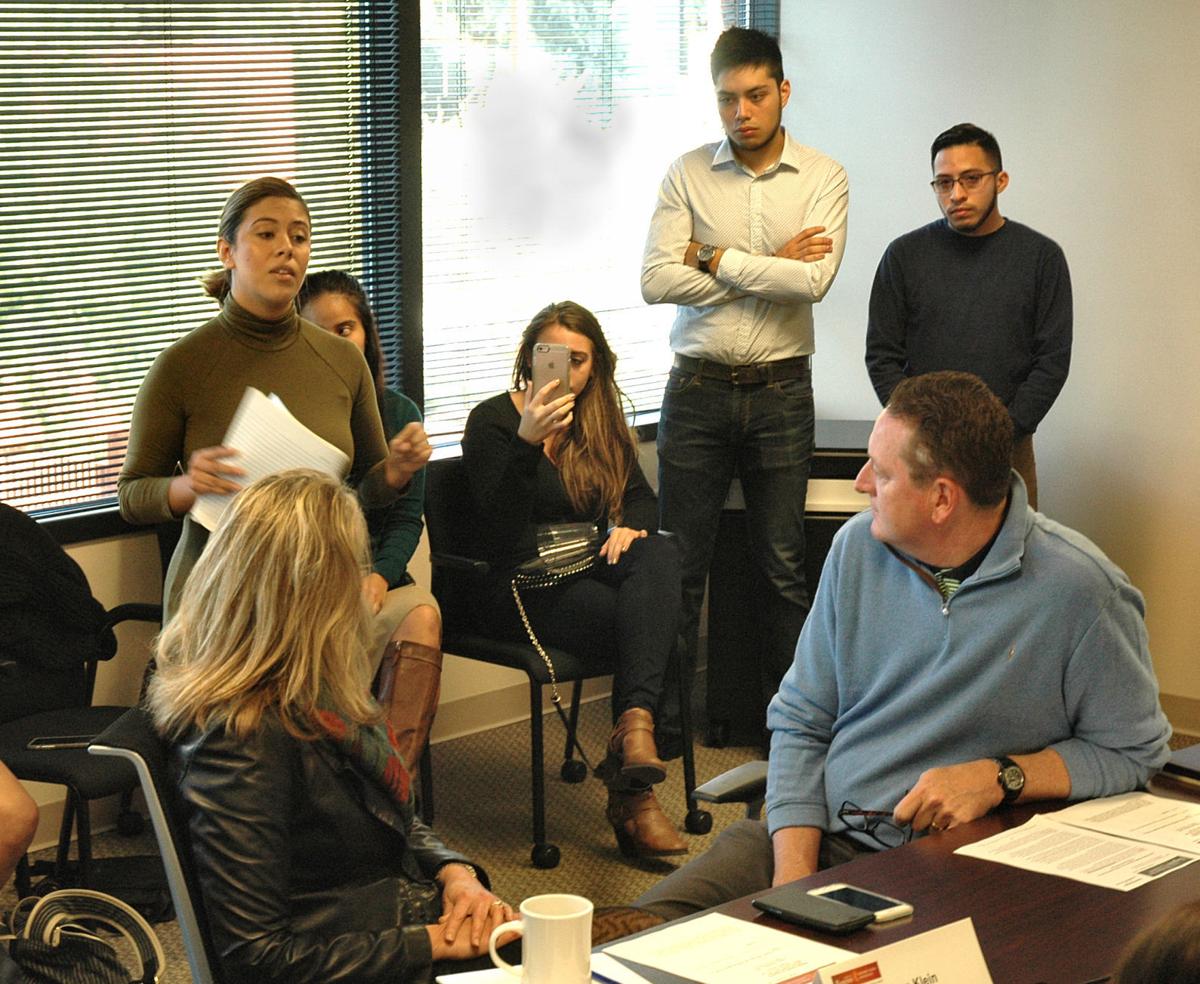 Korina Iribe tells Regent Jay Heiler and others on the board Friday why she believes the letter to President-elect Trump falls short in addressing problems for her fellow "dreamers" and their families. 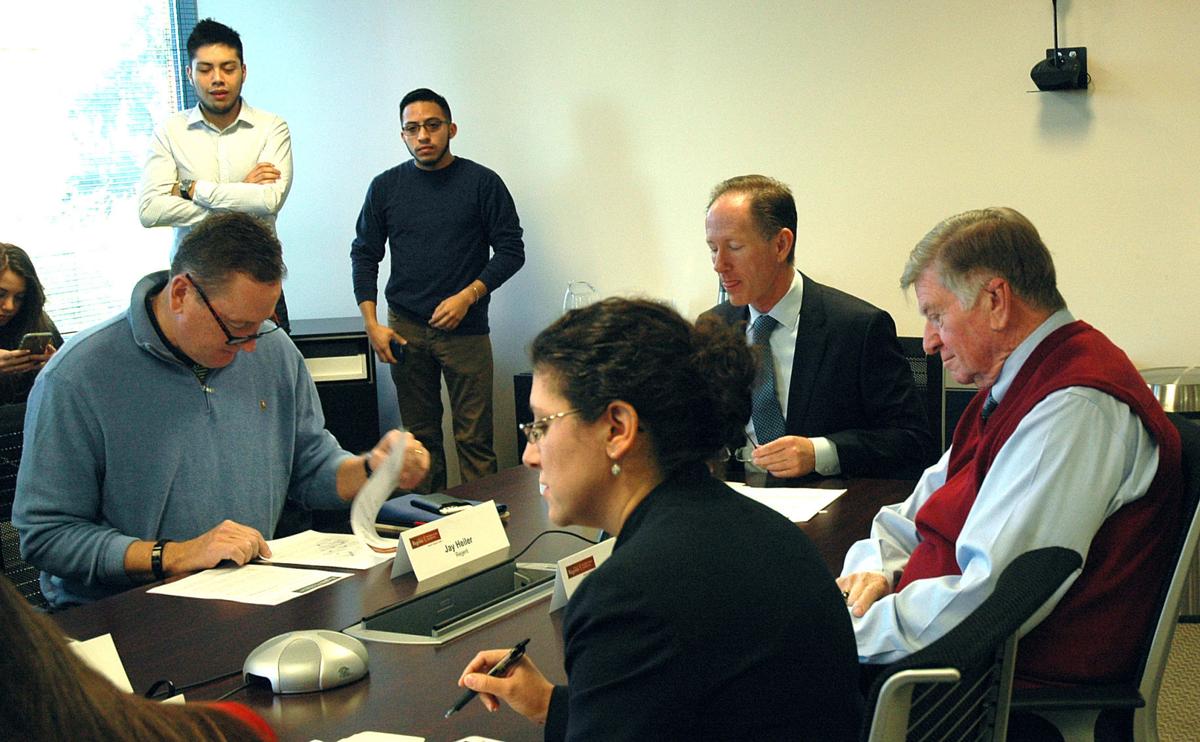 Regents Jay Heiler, Greg Patterson and Bill Ridenour review the letter the board voted Friday to send to President-elect Donald Trump suggesting a way "dreamers" could remain in this country legally. 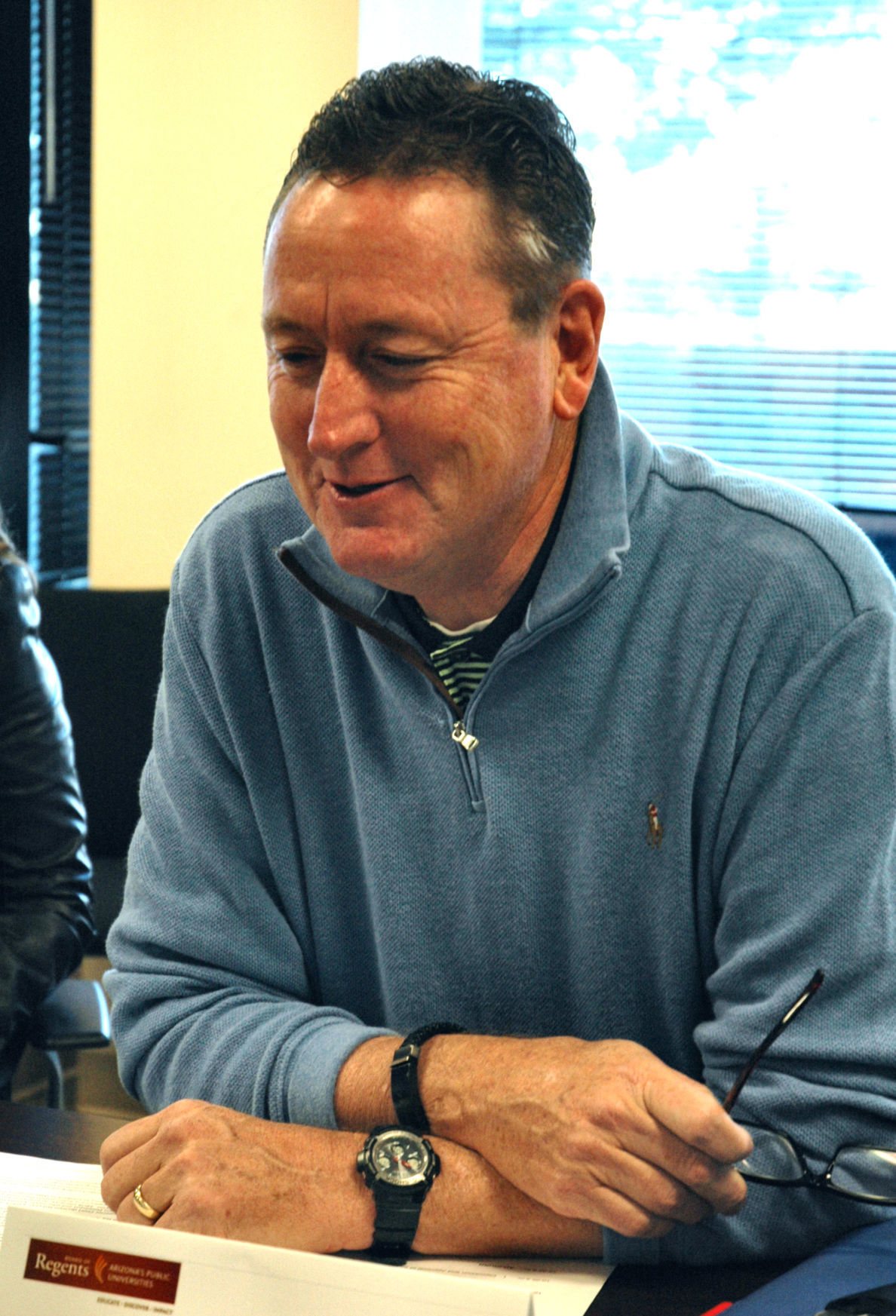 PHOENIX — Arizona regents voted Friday to tell President-elect Trump how he can legally allow “dreamers” to keep their in-state tuition and remain in this country without granting them politically unacceptable amnesty.

The letter they are sending makes the argument that people who were brought to this country illegally as children “lacked meaningful capacity to have violated our immigration laws.”

“Therefore, the case for deportation would be legally weak,” the letter reads. “An accommodation for them cannot be designated or disparaged as a grant of amnesty.”

But Regent Jay Heiler, who crafted the letter the board unanimously approved, believes any real relief for “dreamers” has to come from Congress. He contends President Obama acted illegally in 2012 in creating the Deferred Action for Childhood Arrivals program, or DACA, which allows those brought here as children — known as “dreamers” — to remain without fear of deportation as well as to work.

The issue for the Board of Regents — which oversees the state’s public universities — is more than academic. It goes to the question of how much universities and community colleges must charge students to attend classes.

A 2006 voter-approved law says anyone who is “not a citizen or legal resident of the United States or who is without lawful immigration status is not entitled to classification as an in-state student.”

In 2015, however, Maricopa County Superior Court Judge Arthur Anderson said the federal Department of Homeland Security considers those accepted into the DACA program to be here legally. He said DHS issues them Employment Authorization Documents permitting them to work — documents Arizona law says are a form of permissible identification for certain benefits.

His ruling most immediately affected students in the Maricopa Community College system. But the regents voted almost immediately to offer in-state university tuition to students with DACA status.

The dollar difference is substantial. At the University of Arizona, for example, tuition and mandatory fees for Arizona undergraduates is $10,872 for continuing students and $11,403 for new ones; for non-residents the comparative numbers are $30,025 and $32,630.

Regents staffers said Friday that the best figures they have show 240 students who qualify.

Trump, who railed against illegal immigration during his campaign, can immediately rescind Obama’s DACA program when he takes office Jan. 20. That would leave the “dreamers” without that protected status, forcing the regents to rescind the in-state tuition.

Friday’s letter is designed to describe a legal option for Trump that does not force him to renege on his promise there will be no amnesty.

The president-elect has given indications he’s amenable to such a plan.

“We’re going to work something out that’s going to make people happy and proud,” Trump told Time magazine. “They got brought here at a very young age, they’ve worked here, they’ve gone to school here,” he said. “Some were good students. Some have wonderful jobs. And they’re in never-never land because they don’t know what’s going to happen.”

There is movement on that front: On Friday, U.S. Sens. Richard Durbin, D-Ill., and Lindsey Graham, R-S.C., unveiled plans for federal legislation to provide three years of protection for those who came to this county as children. Durbin urged Trump to continue DACA until Congress can act on the plan next year.

The most recent figures from U.S. Citizenship and Immigration Services show more than 29,000 Arizonans have been granted DACA status to date; the figure nationwide is in the neighborhood of 750,000.

What the board approved did not satisfy everyone.

The letter tells Trump that, as children, “dreamers” could not be guilty of knowingly violating laws making it illegal to remain in this country without authorization. “There were no responsible violations of law in the first instance,” it reads. But it also says “there were for those who brought them.”

Korina Iribe took offense to distinguishing between DACA recipients like herself and their families who brought them here.

Greg Patterson, who chairs the Board of Regents, attempted to stop Iribe from making a statement before the vote, saying the agenda did not have an item for public comment. She ignored him.

“Our parents are not criminals,” she said. “They brought us here for a reason and we want the (Trump) administration to consider not just relief to dreamers but also to our families because we can’t be here without them.”

Heiler, after the meeting, was unwilling to back down, saying adults who came to this country illegally or overstayed their visas broke the law.

Even if Trump leaves DACA in place, legal hurdles remain. Arizona Attorney General Mark Brnovich contends the students are not here legally and therefore are barred by the 2006 ballot measure from having in-state tuition.

“Deferred action is a discretionary determination not to take a specific prosecutorial action that does nothing more than temporarily defer deportation,” Assistant Attorney General Leslie Cooper is arguing in legal briefs to the state Court of Appeals.

The regents have a back-up position if Trump rescinds DACA or Arizona courts side with Brnovich.

Before Anderson’s ruling, the board voted to create a special tuition for DACA recipients who graduated from an Arizona high school at 150 percent of the in-state rate. Mark Killian, who chaired the board at that time, said that figure is legally defensible because it covers the cost of education, meaning it does not run afoul of the law banning the use of state funds to subsidize the students’ education.

As agents get freer hand in border enforcement, Dreamers retreat into the shadows.

Tucson 'Dreamer' stripped of scholarship an hour before classes begin

Two-year award is given to ASU student, then taken away.

Tucson students say they have benefited from program.

Report from governor's panel does not say where money should come from.

Arizona Regents have tuition rule that could benefit DACA students

Korina Iribe tells Regent Jay Heiler and others on the board Friday why she believes the letter to President-elect Trump falls short in addressing problems for her fellow "dreamers" and their families.

Regents Jay Heiler, Greg Patterson and Bill Ridenour review the letter the board voted Friday to send to President-elect Donald Trump suggesting a way "dreamers" could remain in this country legally.