Changes on way for S. Ariz. observatory
Share this
1 of 6 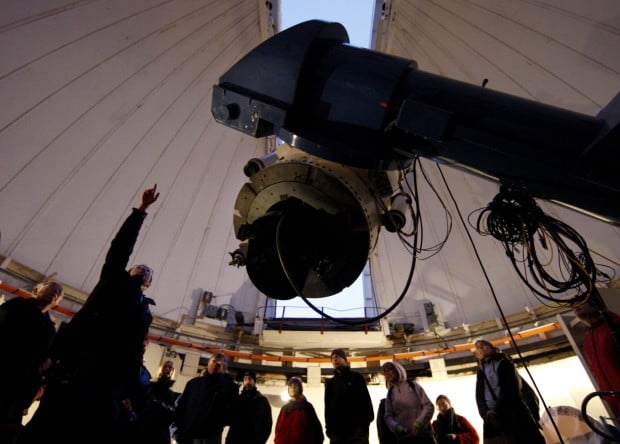 Kevin Bays, a public program specialist for Kitt Peak, describes a 0.9-meter telescope to a tour group about to take a look at the stars with it.

The setting sun lights up the 4-meter Mayall telescope, upper left, the biggest telescope at the observatory 56 miles southwest of Tucson on the Tohono O'odham Reservation. 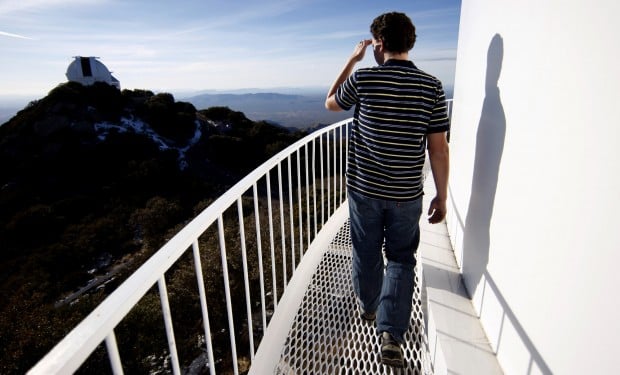 New Mexico State grad student Jeff Coughlin checks out the view from Kitt Peak's 2.1-meter telescope as he goes to open its observing doors for a night of research. 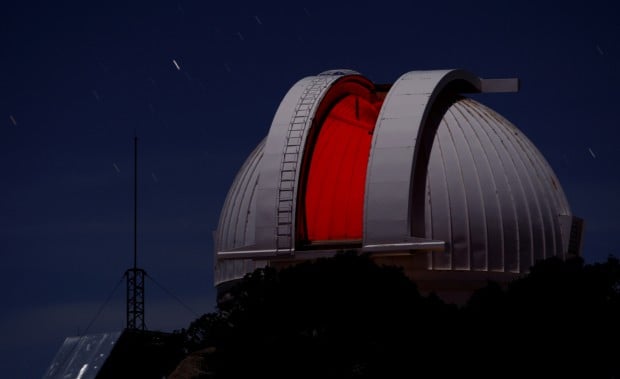 The dim glow of safety lights shines out of the 0.9-meter telescope, one of two dozen instruments at Kitt Peak National Observatory. 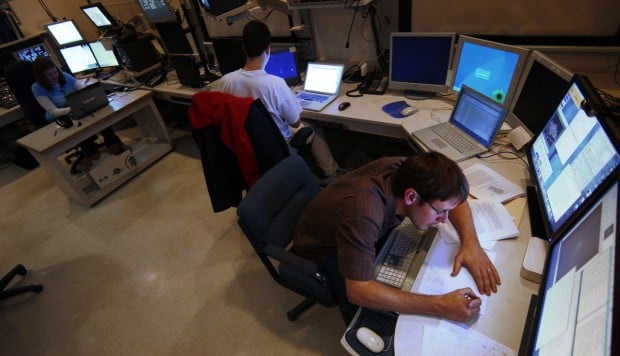 This how astronomers do most of their observing these days: UA grad student Aleks Diamond-Stanic, right, and Wisconsin grad student Paul Sell watch the data stream onto their laptops in the WIYN 3.5-meter scope. 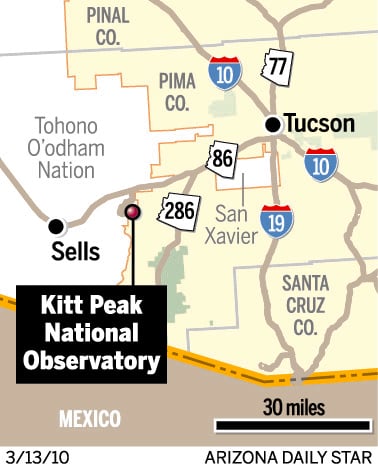 Aden Meinel, the founding director of Kitt Peak, predicted a bright but limited future for the national observatory in 1958.

He wrote that Tucson's glow "does not extend very high in the sky ... nevertheless, the situation could become an annoyance if Tucson should expand westward."

Water would probably limit Arizona's growth, Meinel wrote, and keep the bright lights at bay for 50 years or so, "but the development of a space observatory may have rendered this eventuality of minor consequence to the future of astronomy by that time."

The sky has brightened over Kitt Peak, especially to the north where Tucson and Phoenix are growing together along the Interstate 10 corridor.

Space observatories, such as NASA's famous Hubble Space Telescope, abound and more are being readied for launch.

No new telescope has located to Kitt Peak since the WIYN 3.5-meter telescope saw first light nearly 16 years ago.

The current generation of big telescopes, in the 8-meter class, went to higher and/or darker peaks. The next-generation telescopes, with multiple mirrors 27 to 42 meters across, are proposed for Hawaii and Chile.

Most of the telescopes operated by the National Optical Astronomy Observatory (NOAO), which runs Kitt Peak, are outside the continental United States.

The NOAO's director, David Silva, won't promise that Kitt Peak will exist as a national observatory beyond the next decade.

"There is a general consensus that the role of a Kitt Peak needs to be examined," said Silva. "We need to build new instruments, move into survey astronomy, position it to assume a scientifically vital place until at least 2020."

That doesn't mean Kitt Peak will disappear in a decade. New uses are being found for its telescopes, and new instruments are being fabricated for them.

In one sense, Kitt Peak is victim of its founder's success. Meinel played a critical role in creating an astronomical research-and-development industry in Tucson that no longer relies on the nearby presence of a national observatory.

Meinel was affiliated with Yerkes Observatory near Chicago when he took the first horse-pack trips to the summit, guided by Tohono O'odham ranchers. He became the national observatory's founding director but didn't stay long.

University of Arizona President Richard Harvill asked him to beef up the UA astronomy program. He became director of the Steward Observatory in 1961, then established the Optical Sciences Center in 1966 and became its first director.

He recruited a colleague from Yerkes, Gerard Kuiper, to bring his Lunar and Planetary studies to the UA in 1960.

These days, the Lunar and Planetary Lab (LPL) runs space missions for NASA and builds multimillion-dollar instruments for its space telescopes.

Steward astronomers, with their optical-sciences partners, plan and build giant ground-based scopes and the instruments and cameras that capture their light.

Steward runs the Large Binocular Telescope on Mount Graham, with its twin 8.4-meter mirrors, and is a partner in two giant ground-based projects slated for Chile with a combined cost of $1.1 billion.

The magnitude of current proposals could preclude continued federal operation of existing telescopes, some astrophysicists warn.

"It's not a question of what you're going to shut down," says Harvard physicist Christopher Stubbs, "it's all of them."

Stubbs, who admits to "just trying to stir the pot a little" in his provocative assessment of astronomy's future, said he is pushing his fellow astronomers to make hard choices in their decadal assessment of the science now under way.

It's a concern voiced by others in the town-hall meetings preparing for the National Academy of Sciences Astro2010 report, which will rank projects and guide National Science Foundation funding, which includes NOAO and Kitt Peak.

NOAO has grown far beyond Tucson. It runs telescopes of varying aperture size, located on mountaintops from Chile to Hawaii.

Its principal mission remains that embraced by the NSF when it built Kitt Peak - to provide telescope time to the "astronomy community," based on the merit of proposals for use.

In a white paper he wrote for the decadal survey and in a recent interview, NOAO Director Silva said he'd like to guarantee community access to the wide array of telescopes and instruments that will be available in the coming decades.

• The NOAO proposes to contribute to and operate the Large Synoptic Survey Telescope (LSST), billed as the widest, deepest, fastest survey telescope ever made. Its novel three-way mirror, outfitted with the world's largest camera, would photograph the entire sky every three nights or so and provide data without delay or proprietary claims to astronomers worldwide.

The LSST Corp. is based in Tucson, but its telescope will be built on Cerro Pachon in Chile, adjacent to the NOAO-run observatory at Cerro Tololo. Its partners include the University of Arizona, whose Steward Observatory Mirror Lab cast the mirror for it. Steward's Imaging Technology Laboratory is bidding to build the camera.

• The NOAO seeks a partnership with both "30-meter class" telescopes currently under development: the Giant Magellan Telescope, whose mirrors are being cast by Steward, and the Thirty Meter Telescope, being developed by a consortium headed by California and Canadian universities.

• The NOAO also wants to build new instruments for the two 8.1-meter Gemini telescopes it runs on peaks in Chile and Hawaii and its smaller telescopes on Kitt Peak and Cerro Tololo in Chile.

Operating costs of the large new scopes range up to $70 million a year. It costs about $5 million to run Kitt Peak. "We're in a totally different league," said Jannuzi.

Light pollution is growing more slowly than predicted, he said, because of cooperation from surrounding counties and cities, and observations in infrared aren't affected by visible light.

It costs money to keep telescopes relevant, but some modifications are already under way on the mountain's two biggest telescopes.

The WIYN 3.5-meter, owned by NOAO in a partnership with the University of Wisconsin and Indiana and Yale universities, is being readied for installation of an $11 million "one-degree imager" that will give it a wide and clear view of objects in our own galaxy.

Kitt Peak's largest scope, the 4-meter Mayall, has received a proposal for a longtime wide-field study of dark energy from Lawrence Berkeley National Laboratory that would mean a $71 million upgrade.

Education is also a critical component of Kitt Peak's mission, said Jannuzi. About 20 to 30 graduate students do their doctoral research on NOAO's three Kitt Peak telescopes each year. Young scientists from the UA and a dozen other universities do research nightly on telescopes owned by several university consortiums.

Nobody expects Kitt Peak to grow beyond its current collection of 26 telescopes. In fact, it is certain to shrink.

Counted in the current total are five solar telescopes, which could be mothballed in the coming decade as the National Solar Observatory diverts its resources to the Advanced Technology Solar Telescope being built on the Hawaiian island of Maui.

The same could happen to Kitt Peak's optical telescopes.

Or those telescopes could continue to do good science, perhaps increasing in importance as the big telescopes and the space telescopes identify more phenomena than can be fully investigated.

"Yes, we do build bigger and better things," said Strittmatter. "It is true that the emphasis of what's done has changed, but Kitt Peak is still a pretty good site.

"I just had a call from back East where a coalition wants to use Bok for a science program. The scientific need for such things has not disappeared.

"I think Kitt Peak will be with us for a long time," Strittmatter said. "Old telescopes never die, except maybe for Stonehenge."

1955 — Aden Meinel of Yerkes Observatory is chosen to lead a survey of 150 mountain ranges to find a site for a national observatory.

Kevin Bays, a public program specialist for Kitt Peak, describes a 0.9-meter telescope to a tour group about to take a look at the stars with it.

The setting sun lights up the 4-meter Mayall telescope, upper left, the biggest telescope at the observatory 56 miles southwest of Tucson on the Tohono O'odham Reservation.

New Mexico State grad student Jeff Coughlin checks out the view from Kitt Peak's 2.1-meter telescope as he goes to open its observing doors for a night of research.

The dim glow of safety lights shines out of the 0.9-meter telescope, one of two dozen instruments at Kitt Peak National Observatory.

This how astronomers do most of their observing these days: UA grad student Aleks Diamond-Stanic, right, and Wisconsin grad student Paul Sell watch the data stream onto their laptops in the WIYN 3.5-meter scope.