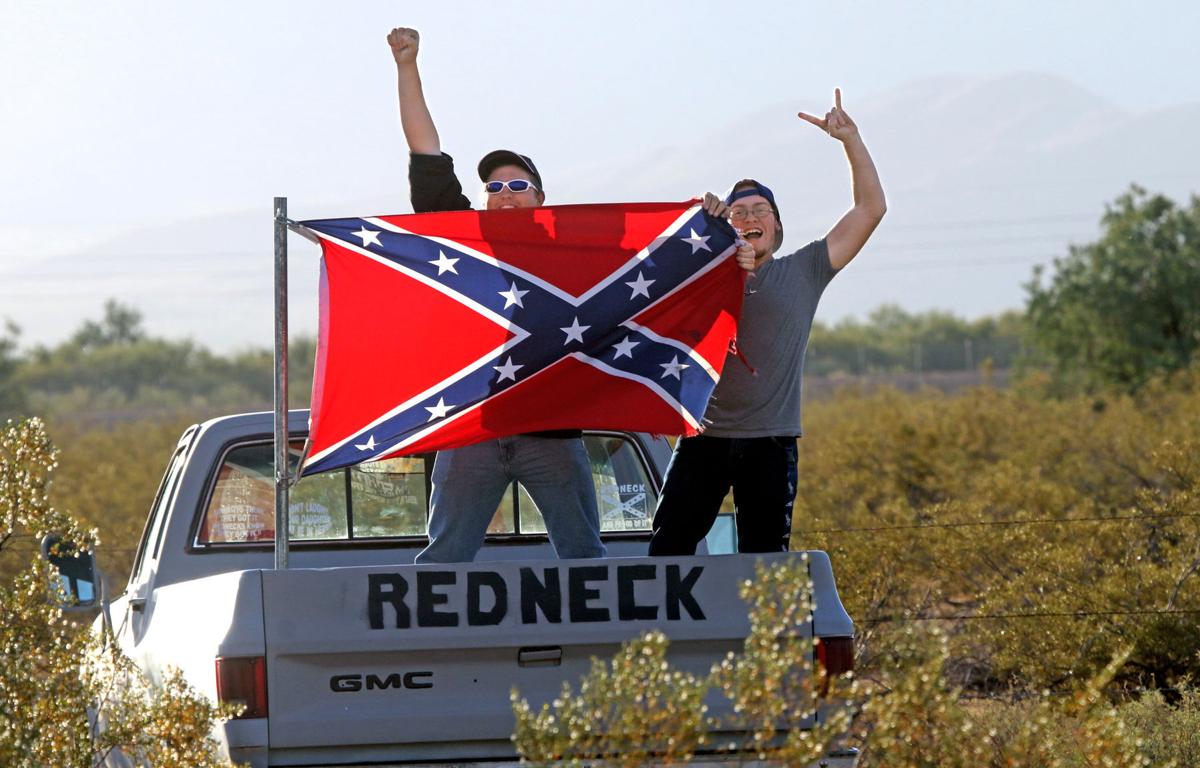 After the Confederate flag was banned from their campus, Marana High School seniors Jesse Lagois, left, and José Mendez, both 17, display the flag across the street from the school on Tuesday. Lagois has permission to park his truck on the private property. 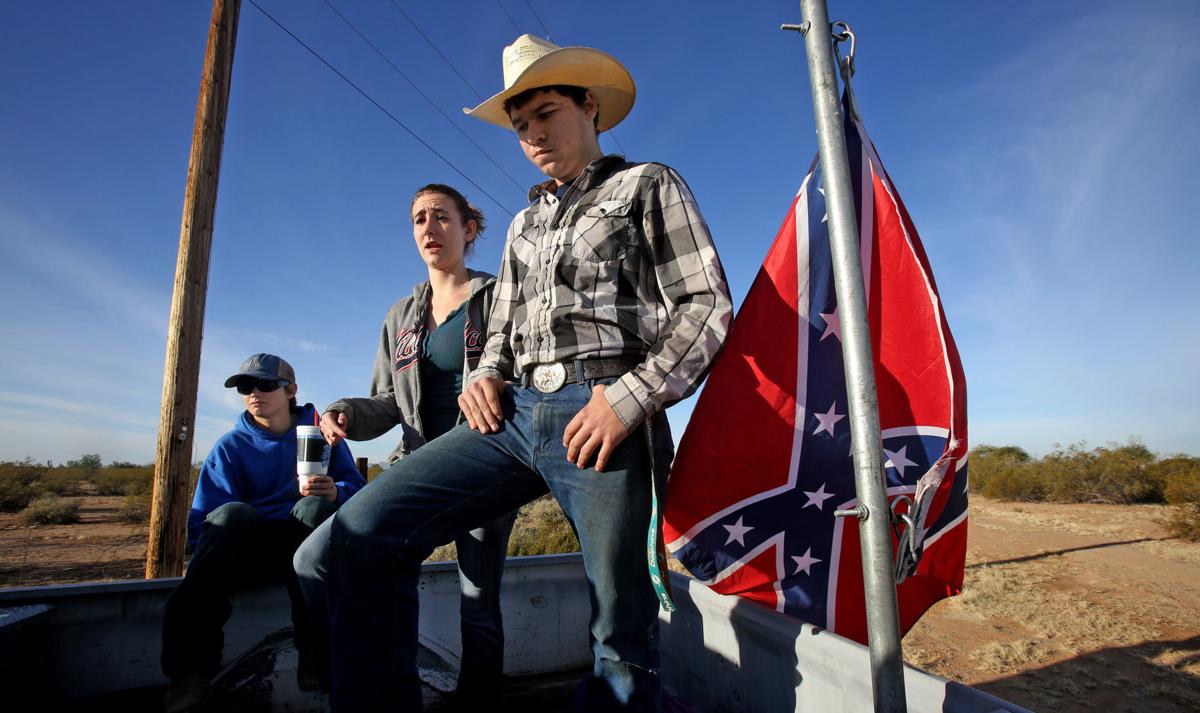 Marana High students Malachi Miller, right, and Alexis Kring, both 16, talk about what the Confederate flag means to them. “We’re not standing for the wrong reasons,” Kring said.

Marana High School has banned the Confederate flag from campus, saying its display by a group of students has become a disruption and creates an unwelcoming environment for classmates and staff of color.

The group of students — who have been flying the flags from their vehicles for more than a year — said it represents pride in their Southern heritage and the ban oppresses their right to free speech. But for many in America, the flag is a symbol of racism, white supremacy and slavery.

The northwest-side school has been receiving an increased number of complaints about the flag from students and parents in the past month, Tamara Crawley, a Marana district spokeswoman, said. As a result, the school banned the flag from being flown or displayed on campus. The flag can still be used for educational purposes, school leaders have said.

While the protesting students argue that they’d never harassed anyone, school administration and several students and parents said the flag was being used to create a racially charged and aggressive school climate.

“This isn’t about a particular object,” Crawley said. “It’s about ensuring that everybody is safe and comfortable.”

Just before the first bell rang at Marana High on Tuesday morning, a group of teens gathered around a pickup truck parked across the street from the school.

They were hanging out across the street and not on school property, at 12000 W. Emigh Road, because of the flag ban. Flying it from the other side of the road — while parked on private property — is a form of civil disobedience, said one of the students, Jesse Lagois, 17.

“We’re actually fighting for our rights to express ourselves,” he said.

Lagois was leaning against the truck, from which the Confederate flag flapped in the wind. The light-blue GMC also had the word, “redneck” written on the tailgate. The word, the senior said, represents a life of blue-collar workers, country folk and back roads.

To Lagois and a small number of classmates, the flag does not symbolize racism. “It’s heritage. It’s everything that the South stood for,” he said.

The school has about 2,000 students and is 60 percent white.

Alexis Kring, 16, said she wants to raise awareness of what she considers the real values the Confederate flag represents. The symbols and designs on the flag represent the blood of Christ, protection of God, a Christian cross and the 13 Southern states, the sophomore said.

“We’re not standing for the wrong reasons,” she said. The message of the Confederate flag, to her and the group, is “through the blood of Christ, the 13 states are united in a Christian fight.”

But for Mariah Barnett, a senior who is half African-American, the flag has a different message: one of hatred and separation.

Barnett said she’s dealt with racism on campus — subtle or otherwise — throughout her time at Marana High.

But it’s gotten really bad in the past year or so, she said; she’s seen more Confederate flags and sometimes heard people saying racial slurs or chanting negative or derogatory things about people of color.

She reckons the heightened racial tension might have something to do with 2016 being an election year, but no matter the reason, she said she feels scared to walk from the school building to her car in the parking lot.

“It’s kind of hard to explain with words,” she said. “I feel threatened. I feel hurt and frustrated.”

Her parents, Stacey and Cynthia Barnett, are just a few of the people who voiced concerns to the school. They say they’ve seen the flag being worn as capes by Marana High students and heard racial slurs being thrown around casually.

“We don’t always feel safe sending her to school because we don’t know what might happen,” Cynthia Barnett said. “We’re not sure how far someone is willing to take that fight.”

Stacey Barnett said he’s heard the heritage argument before, but he says that doesn’t change the fact that the Confederate flag was brought back after the Civil War as a scare tactic and symbol of hatred against black people.

They’ve spoken to the principal, and he’s taken the issue seriously. But they also understand that the issue is a sensitive one. What they want, they said, is for the kids who feel proud of their Confederate flag to have more empathy.

“Maybe it’s something you feel is fine, but if you know it hurts somebody else, where is your empathy?” Cynthia Barnett said.

Another parent, Cindy Perez, whose son is a senior at Marana High, said her son began to feel like “a nobody” as a result of what he felt was a racist and intimidating atmosphere at the school.

He felt as though the school was allowing it to go on, though Perez said she tried to explain to him that it might be a difficult thing to change.

David Mandel, the school’s principal, wrote in a letter to parents that while he wasn’t passing judgment on either side, the school has a responsibility to do what is in the best interest of protecting student safety and the well-being of all students, and it sought legal counsel in doing so.

The Confederate flag was a “reasonable barrier to feelings of safety and sense of well-being for a large number of students and staff,” he wrote.

Lagois and his friends say they’d never hurt or harass anyone, nor did any student ever come up to them to contest the flag, though he says he’s had soda and food thrown at him. They just want to be able to express their pride in their Southern heritage, he said.

At least 30 people at the school have expressed support, he said. A Facebook page, called “Parents Standing Up for Students Rights,” features an image with two pickup trucks flying Confederate flags with the message, “You ain’t stopping us.”

Jose Mendez, 17, who was part of the group hanging out by the pickup across the street from the school, said their values must be accepted the same way they’re expected to accept values they don’t agree with.

“We just want to be able to show our values,” he said.

Two seniors coming to school Tuesday morning said they don’t object to flying the Confederate flag on campus, as long as it’s not disruptive. But it kind of was, said Zak DeMars and Kyle William.

Students have been walking up and down the road waving the flag at oncoming cars and pedestrians, they said.

“They were flashing,” William said. “Just flying it is fine.”

I am writing to you to share a new development on our campus. As happens in any community, there are times when we must enact standards regarding issues where individual actions affect the well-being of the members of the greater community.

Over the past month we have seen a dramatic increase in the number of students and staff sharing concerns and students feeling unsafe as a result of the Confederate flag on the Marana High School campus. We have also had parents calling and expressing their concerns. We have a wonderful community of students and families who come from diverse backgrounds, and with diversity comes many opinions about the messages conveyed by symbols and other forms of speech in our nation and world. From the differing parties, I have heard messages of support for the presence of the flag and messages urging me to remove it from the campus. There are advocates on each side of this issue who have passionate feelings.

I want to be clear that as a public school that serves this diverse community, we are not making judgements about the validity of either side; however, we are absolutely responsible to do what is in the best interest of protecting student safety and the well-being of all students. When an element of student speech, whether by symbolic representation or explicit utterance, presents a significant potential for disruption to the education of students and the work of the adults on campus, we are responsible to address the situation. To that end, we concluded, that the display and possession of the Confederate Flag poses a reasonable barrier to feelings of safety and sense of well-being for a large number of our students and staff. As a result, we worked in consultation with legal counsel to ensure we proceeded appropriately. In an effort to keep all students safe, a new rule has been put in place to eliminate this potential disruption on the Marana High School campus. As of Dec 13, the Confederate flag will only be displayed on campus as part of classroom curriculum.

Thank you for your ongoing support of our outstanding Tigers and your partnership with our great school.

Marana High School banned the Confederate flag on campus after concerns over intimidation and safety. The students are parking across the stre…

A regents report details the public universities' financial aid for 2015-2016.

District works with UA to find teacher candidates with ties to Sahuarita.

Report from governor's panel does not say where money should come from.

The Marana Cares Mobile is an effort by the Marana Unified School District to provide food to children during school breaks. The district even…

This Tanque Verde High senior is headed to Harvard next fall

TEP steps up to keep the lights on at Winterhaven

Tucson Electric Power will be the title sponsor for the Winterhaven Festival of Lights for at least five years, a news release says.

2 suspects arrested after exchange of gunfire on Tucson's NW side

Suspect shot at deputies, who returned fire, but no injuries were reported.

The mesquite tree at Amphitheater Middle was more than 100 years old.

Tucson Clean & Beautiful is working with the schools.

Under Arizona bill, police would be able to arrest peaceful protesters to prevent a riot

Republican Arizona state senators voted Wednesday to give police new power to arrest anyone who is involved in a peaceful demonstration that may turn bad.

They report regularly hearing negative remarks, being victimized at school.

The state's top transportation official says there's no need to rename the highway in Arizona — but state officials also aren't removing its marker.

After the Confederate flag was banned from their campus, Marana High School seniors Jesse Lagois, left, and José Mendez, both 17, display the flag across the street from the school on Tuesday. Lagois has permission to park his truck on the private property.

Marana High students Malachi Miller, right, and Alexis Kring, both 16, talk about what the Confederate flag means to them. “We’re not standing for the wrong reasons,” Kring said.