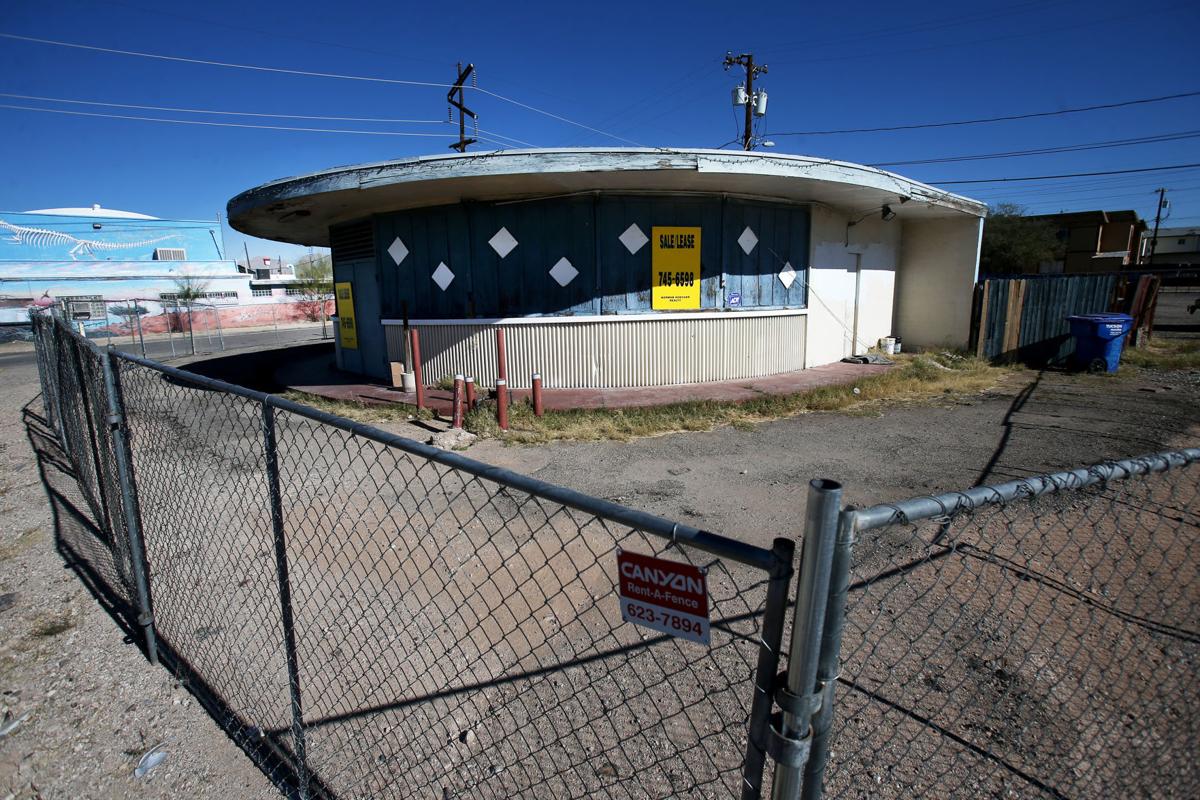 This former Duke’s Drive-In, at 1148 N. Main Ave., is to be demolished in January unless efforts to save it are successful. 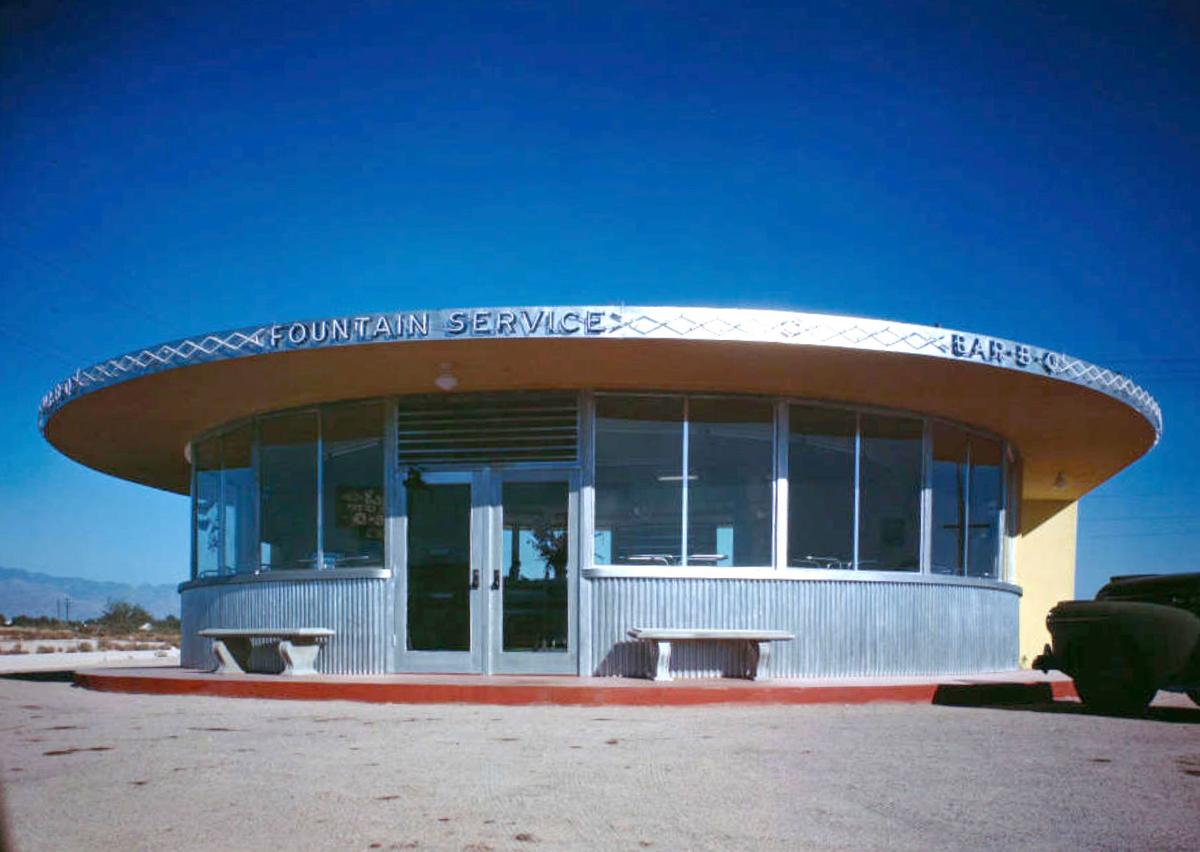 The building, designed by Arthur Brown in 1947, was featured in the 1974 film “Alice Doesn’t Live Here Anymore.”

The historic building on North Main Avenue north of West Speedway once served as an exclusive men’s social club for Tucson’s prominent black men who were not allowed into white social clubs.

The circular, dilapidated building, built in the mid-1940s as a drive-in restaurant, also was a restaurant for black entertainers and professional baseball players who were denied lodging at downtown Tucson’s segregated hotels. A motel, which has since been demolished, was also built for the black athletes and entertainers.

Now, the building at 1148 N. Main Ave. is set for demolition in January. But, Ken Scoville is working with the Tucson Historic Preservation Foundation, Dunbar/Spring Neighborhood resident Debi Chess Mabie and others to try to save the building.

Meanwhile, businessman and gem show operator Danny Duke owns the property and will look more into the issue regarding the demolition this week, said Joseph Woolridge, property manager for Duke.

Duke owns about two city blocks north of Speedway, and the historic building is the only building on the property, said Woolridge. “It does have some history, but to fix it up and preserve it will cost a lot of money and Danny is not interested in doing it,” he said.

City Councilman Steve Kozachik said the building “has a legitimate interesting history,” but the city cannot designate it as a historic landmark. “We do not have the legal ability to downzone a property and place that sort of restriction on it without the owner’s permission.”

Kozachik said the property owner could sue the city under a law, the Private Property Rights Protection Act, passed by voters in 2006, that prevents the government from placing more zoning restrictions that would reduce the earning potential of a property.

Councilman Paul Durham said he wants “to find a buyer for that property that values the building. What I do not want to see is the building torn down before a buyer is interested in restoring the building. We are working on it, and it seems best to preserve the building.”

Scoville, a retired history teacher who has been involved in historic preservation for more than three decades, said he wants Duke to give those working to save the building 30 days to find a buyer to restore the exterior and adaptively reuse the building as possibly a business or home.

Another possible option is to see whether the building can be relocated, said Scoville. “We are trying to educate buyers and sellers to the value of historic resources,” said Scoville, explaining that the property sits within the Miracle Mile Historic District, which recently received that designation.

Historic successes he pointed to were the downtown Fox Tucson Theatre, the Rialto Theatre, Hotel Congress and storefronts that now house restaurants.

“The Beau Brummel Social Club was built in response toward the inhospitality for African-Americans and people of color in this country,” said Mabie. “There is a sense of belonging, a sense of space and a sense of place that is embodied in that building, and to tear it down would be to diminish the act of resiliency.”

“I’d like the building to be preserved in its entirety,” Mabie said. “There are wonderful examples throughout Tucson of adaptive reuses of historic places. We need to think differently about our architecture and our environment, about our history and about what this city represents and who we want to be,” she said.

In discussing the building’s future, “It will be hard to tell what will happen, but if people come to the table with open minds and creativity we can come up with a solution,” said Mabie. “No matter what happens, we all can agree this is a significant piece of Tucson history.”

Mabie said the historic building has a connection to the Dunbar/Spring Neighborhood where black children attended Dunbar School, built in 1918, at West Second Street and North Main Avenue. It remained segregated until 1951, when it was renamed John A. Spring Junior High School.

“I think it is important to underscore that buildings like this, in places that have a historic significance to people in our community, are important to protect,” said Demion Clinco, chief executive officer of the Tucson Historic Preservation Foundation.

“The building does not read as a traditional historic place and yet it has a rich, wonderful dynamic history that makes it extraordinary. Historic buildings don’t have to be architectural monuments to be important,” said Clinco.

After a fire damaged Ted DeGrazia's "Mission in the Sun" last Memorial Day, work is underway to salvage as much as possible before restoration process begins in the spring.

Jefferson Stensrud: We must make sure that monastery is protected

Tragic it would most assuredly be, if this noble structure were relegated to the collective memory.

3 concerts to get you in the holiday spirit

Irish Christmas at the Fox and heavy metal at the Rialto; sounds like a weekend.

The man's identity has not been released.

This former Duke’s Drive-In, at 1148 N. Main Ave., is to be demolished in January unless efforts to save it are successful.

The building, designed by Arthur Brown in 1947, was featured in the 1974 film “Alice Doesn’t Live Here Anymore.”