FBI fears 'insider attack' on inauguration; all troops being vetted

The courtyard at a Tucson retirement home is not where you might expect to find endangered species, but there they were — 1-inch, dusky gray desert pupfish hiding in the cattails of a small above-ground pool.

Roughly three dozen of the federally protected fish were adopted in October by the Hacienda at the River assisted living and care facility on River Road east of Campbell Avenue under a federal Safe Harbor agreement designed to create reserve habitats for endangered species.

The fish pond was dedicated in a short ceremony Thursday.

But these rare fish are expected to do more than just survive.

The new pool and its inhabitants will serve as a multigenerational educational tool for residents of the nursing home and students from the K-6 Al-Huda Islamic School next door.

Seventeen students from grades 3-6 walked over from Al-Huda to attend the event.

Jason Welborn, landscaper and horticulture guide for the nursing home, came up with the idea to host the endangered fish.

Welborn said he learned all about Safe Harbor agreements in his previous job with the National Park Service, including a stint at Tumacacori National Historic Park.

He and Ramdan plan to use the fish habitat to teach future lessons — for the young and old alike — in biology, chemistry and the management of so-called “species of concern.”

Ramdan said the K-6 school began partnering with the nursing home on science lessons about three years ago. This was the students’ third visit to the Hacienda at the River so far this school year.

Ramdan said the kids are now putting some of what they have learned to work by making their own compost for a garden they will plant this spring.

“They’re learning, enjoying and applying, which is the important thing,” the principal said.

Desert pupfish were once common in the springs, backwaters and tributaries of desert rivers in Arizona, California and Mexico. Habitat loss and the invasion of non-native fish wiped out the natural populations in Arizona, though a subspecies can still be found in the waters of Quitobaquito Spring in Organ Pipe Cactus National Monument.

The Santa Cruz River saw its last native pupfish in the early 1900s.

Since it was listed as endangered in 1986, the species has been reintroduced at select locations in Pima County and six other Arizona counties. The fish are also now kept at about 25 artificial habitats around the state, including the Arizona Sonora Desert Museum, Tohono Chul Park, and the International Wildlife Museum.

At just 3 feet wide, 8 feet long and 2 feet deep, the pool at the Hacienda at the River is probably the smallest artificial habitat in the state. It’s also one of the only ones housed by a commercial entity.

Welborn said he personally helped net the nursing home’s crop of rare pupfish from a pond in Patagonia where the species has been introduced.

He said it took about two years to get the Safe Harbor agreement approved and to convert the property’s original, chlorinated reflecting pool into a welcoming, chemical-free fish habitat.

The nursing home’s new aquatic residents do not need to be fed. “Everything the fish need to go through their whole lives is in this pond,” he told the small crowd gathered in the courtyard Thursday.

Desert pupfish typically only live for a year or two and never grow more than about 3 inches in length. But when mating season rolls around in the spring, the males turn neon blue and fight each other over territory and the attention of the females.

“Hence the name pupfish, because they act like little dogs toward one another,” said Ross Timmons, a native fish biologist for the Arizona Game & Fish Department who coordinates projects like this one.

Timmons said such a small habitat with so few fish probably won’t do much for the overall survival of the species, but it will help satisfy another requirement of the federal recovery plan for the desert pupfish: education and outreach.

“Anyone who sees the pool, reads the sign or sees a bright blue male and says, ‘Wow, that’s cool,’ that is a win,” he said.

After the dedication, the Al-Huda students crowded around the pond to search for fish.

One girl said she saw one — a tiny, grayish brown thing that was there for a second and then gone. Everyone else seemed to come up empty.

After a while, the kids gave up and started playing with the cattails instead, laughing as the air filled with cottony fluff.

That’s when Principal Ramdan announced it was time for everyone to head back to school.

A javelina was stoned to death at a Tucson elementary, reward offered to catch its killer

The department's Operation Game Thief program is offering a reward of up to $1,500 for information leading to the arrest of those involved in the killing.

Quillbert, the porcupine at Tucson's Desert Museum, has died 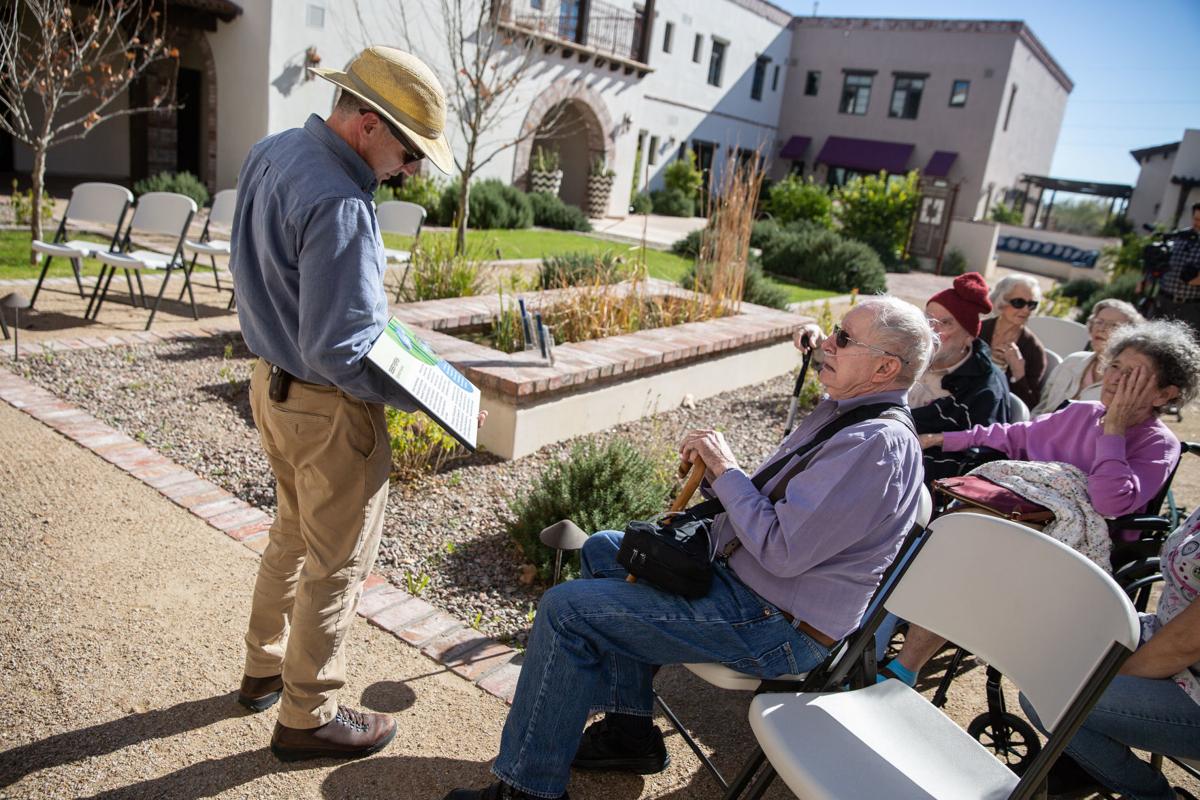 Jason Welborn, a horticulture guide for the Watermark Retirement Communities, talks with residents about the pupfish now residing in a pond at Hacienda at the River. 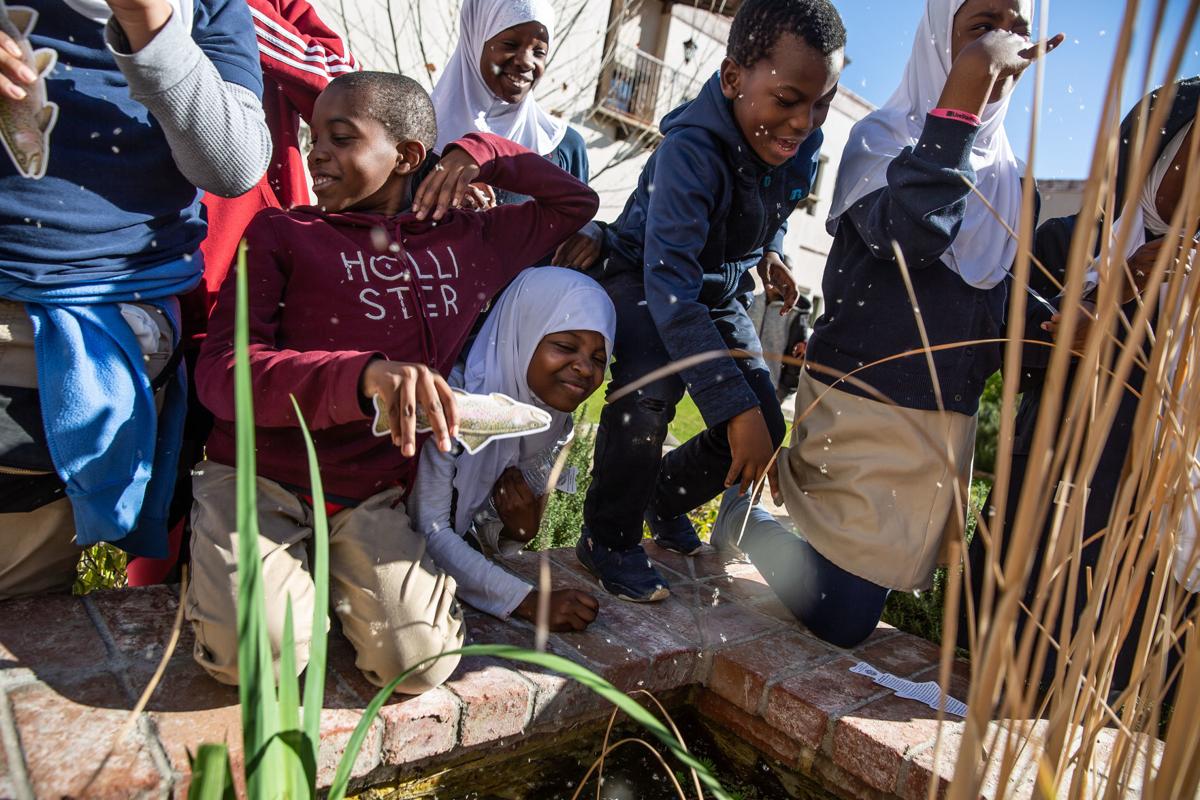 Students from Al-Huda Islamic School react after a cattail bursts while they were looking for Pupfish inside a pond at The Hacienda at the River following a welcoming of the new habitat at the retirement community, on Jan. 23, 2020.