The number of recorded Border Patrol encounters with migrants at the southern border is higher than ever, but many experts say that doesn’t necessarily mean there are more people coming to the U.S. than ever before.

That said, many experts also agree that rising levels of violence and worsening economic and political situations, exacerbated by both the pandemic and in some cases climate change, are driving more people from their homes, from Mexico all the way to Brazil. 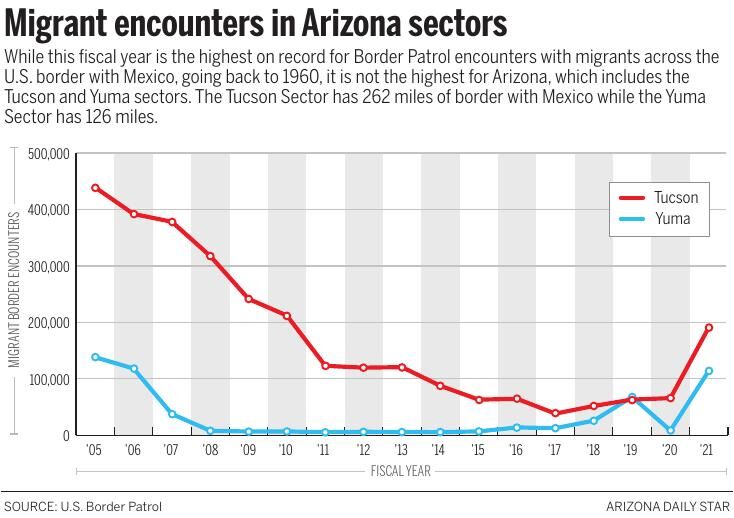 Along with the high number of encounters, there is also a rising percentage of individuals apprehended more than once by the Border Patrol. What officials refer to as the recidivism rate was 27% of encounters in 2021 across the U.S., 26% in 2020 but only 7% in 2019.

The rising recidivism rate has to do with the use of Title 42, a public health policy used since the beginning of the pandemic that allows the federal government to immediately expel migrants from the country without processing them under immigration law.

“This is not the first time we’ve seen large numbers of migrants,” said Customs and Border Protection spokesperson John Mennell. “CBP continues to expel migrants under CDC’s Title 42 authority. The large number of expulsions during the pandemic has contributed to a larger-than-usual number of migrants making multiple border crossing attempts, which means that total encounters somewhat overstate the number of unique individuals arriving at the border.” 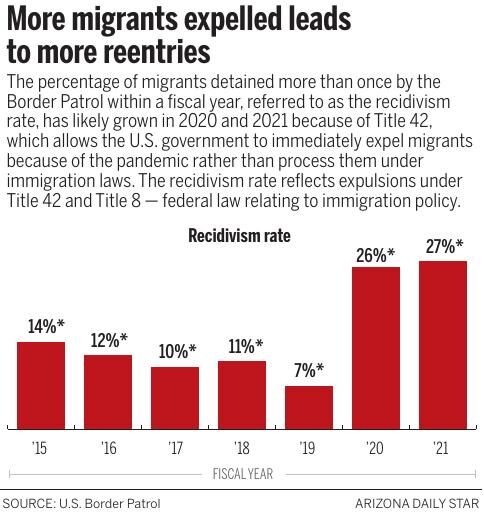 Under Title 42, people are sent directly across the border instead of being sent back to where they originated, making it more likely they will attempt another crossing, said Javier Duran, border studies professor and director of the Confluence Center at the University of Arizona.

“In some ways, the U.S. immigration policy, in practice, has also had an effect by not allowing some of these legal processes to take place,” he said. “To the degree that we’re not, in the United States, able to create orderly processes for these people, not only for asylum but in general, to be able to come to the United States in different capacities, I think we might see an increase in attempts to cross without the proper documents.”

Besides not taking into account the high recidivism rate, the 2021 numbers also don’t account for the fact that the border is more closed now than it’s ever been, said Elizabeth Oglesby, associate professor of Latin American studies at the University of Arizona, who specializes in forced displacement and migration.

“The estimates are that far fewer people are crossing without detection today than, say, 20 years ago,” she said. “The border is largely closed. So we can’t really say that this is a record number of migrants crossing the border. In fact, it’s probably not really anywhere near what it was 20 years ago in terms of people actually getting across the border.”

The U.S. Department of Homeland Security estimated that 2012 was the first year that Border Patrol apprehended a majority of people crossing the border, according to a report from the American Immigration Council. The Border Patrol recorded more than 1.6 million apprehensions in the year 2000 and Homeland Security estimates there were an additional 2.1 million successful unlawful entries.

This year, it’s likely that only about 540,000 migrants were able to enter the country without authorization, according to the Migration Policy Institute, a nonpartisan think tank, based on estimates from Border Patrol figures in recent years.

The high recidivism rate, more detailed data gathering than two decades ago, and the Border Patrol’s capacity in recent years to apprehend a larger number of migrants make a direct comparison to previous years unfeasible, The Migration Policy Institute said in a press release.

Today’s border enforcement strategies include nearly twice as many Border Patrol agents, a greater use of detection technology and a tighter funneling of migrants due to border barriers and enforcement.

Also, the Biden administration being perceived as friendlier than the Trump administration may be another reason more people are migrating now. However, experts say that little has actually changed in immigration policy under the current administration.

Additionally, more people are coming with their entire families and turning themselves into Border Patrol.

“Twenty years ago, you might have had mostly single adults migrating, maybe even going back and forth,” Oglesby said. “Now, the migrant journey is so dangerous. It’s so expensive. The abuses that migrants face in their journey are so intense that that kind of circular migration is really difficult. And so for families to stay together, the whole family has to come.”

The nationality of migrants and whether they are traveling in a family varies widely across the U.S. border. The Rio Grande Valley Sector, in Texas, had the highest number of encounters at more than 549,000, of which more than 60% involved families or unaccompanied minors.

By contrast, in the Tucson Sector, nearly 84% of encounters in 2021 involved single adults, mostly from Mexico or Guatemala. The Yuma Sector saw many more families and people coming from South America, Haiti and Cuba. 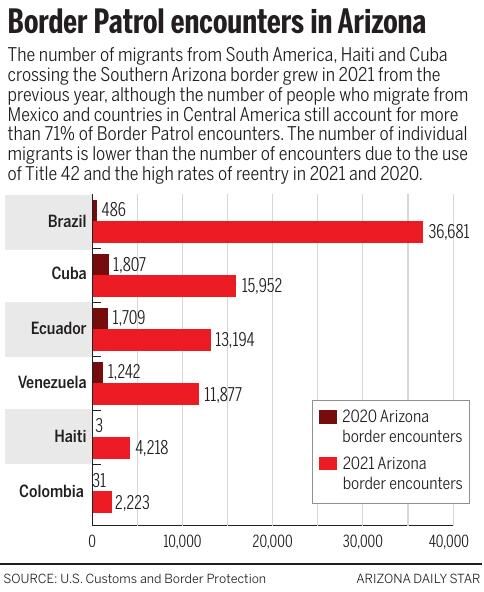 Southern Arizona is seeing a resurgence in single adult Mexican migration, said Daniel Martínez, a UA School of Sociology associate professor and co-director of the Binational Migration Institute, specializing in the association between increased border enforcement and migration-related outcomes.

While it’s hard to grasp the breadth of what’s happening with such new data, a few reasons are likely driving this trend, Martínez said. These include the devaluation of the peso over the last decade, causing more economic hardship; disillusionment with Mexico’s political leaders; and ongoing levels of violence.

While the violence isn’t new, its pervasiveness is making it harder for people to flee while remaining in Mexico.

“It’s possible now that we’re starting to see more and more people being displaced by violence, especially as organized crime continues to make its way through most of the country,” Martínez said.

Unlike in the Tucson Sector, more than half of the nearly 114,500 encounters in the Yuma Sector involved families, many of which were from Ecuador, Brazil and Venezuela. The Yuma Sector covers 126 miles of border with Mexico, between the Yuma-Pima County line and the Imperial Sand Dunes in eastern California.

Political and economic distress, violence and natural disasters, which in many cases have been exacerbated by the pandemic, are forcing more people to leave Haiti and countries in South America. As well, the pandemic has made it harder for people to migrate to South American countries or for migrants already established there to stay.

“A lot of people were migrating laterally, or they were going to neighboring countries, or Haitians would go somewhere else in South America,” Oglesby said. “Many countries in South America were absorbing migrants from within the region through things like humanitarian aid work, asylum, temporary work permits. I do think that the pandemic has impacted that.”

Unaccompanied minors aren’t immediately expelled under Title 42, and so it’s possible there are more families who are sending their children across the border alone to avoid dangerous conditions in Mexico, Oglesby said.

“And so, some of what we’re seeing with those numbers of unaccompanied minors is a direct result, again, of our border policies, particularly now this year with Title 42.”

Local journalism is important, and we are asking for your help to support it by subscribing to the Star. Certain content each day will be avai…

Pre-COVID, Mexican shoppers spent about $1 billion per year in Tucson and $2.5 billion across the state. Businesses are excited as they prepar…

The number of times Border Patrol agents near Tucson encountered migrants rose in September for the first time since April, federal data show.

Fentanyl seizures spiked in Arizona and California, while Texas and New Mexico are the busiest areas for migration.

For Star subscribers: Sen. Kyrsten Sinema knows the bride and groom but not guests who wore "disrespectful and racist costumes...and she stron…

She awaits judge’s ruling on whether she was within her rights to remain at a border wall construction site, on land sacred to Indigenous peop…

As the U.S.-Mexico border reopens to nonessential travel, Mexican tourists come across to shop and visit family, though the hordes of shoppers…

COVID is No. 1 on-the-job killer of CBP officers, despite imminent vaccine mandate

​​COVID-19 is the top killer of agents with Customs and Border Protection, whose deaths from the virus are considered in the line of duty, eve…

As border reopens to tourists, migrants ask US to also reopen asylum process

Migrants protesting in Nogales, Sonora, are pleading with the U.S. to reopen the asylum process now that the border has reopened to vaccinated…

Customs and Border Protection's Air and Marine Operations works with Border Patrol to apprehend migrants at the U.S.-Mexico border on Nov. 10,…

New work on the border wall could include filling in gaps in the wall, revegetating scraped ground, adding small wildlife passages and flood c…

Analysis: Ducey's plan for border security is partisan and unclear

For Star subscribers: Gov. Doug Ducey highlighted border security as one of his main priorities for 2022. But many of his comments leave quest…

The tougher requirement that took effect Saturday had been expected since last fall, when the government reopened the border to nonessential t…

Sewage leaks are common in Nogales, and they bring with them the rancid smell of wastewater throughout the city.

For Star subscribers: Gun smuggling from the U.S. into Mexico is a problem for both countries, as it fuels illegal drug trade in Mexico and in…

U.S. donates leftover border wall materials, including to Texas for its own wall

Various donations are part of effort to clear out the $265 million in left-over wall parts from dormant construction sites along the U.S.-Mexi…

The Star is Newspaper of the Year and its Kelly Presnell is Photographer of the Year, among many other awards earned by the paper.