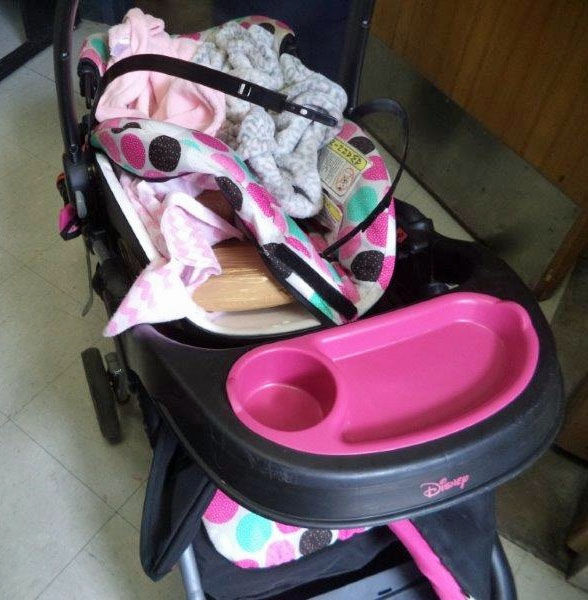 Customs officers in Nogales seized 5 pounds of the synthetic opioid fentanyl that was hidden inside a stroller in April. 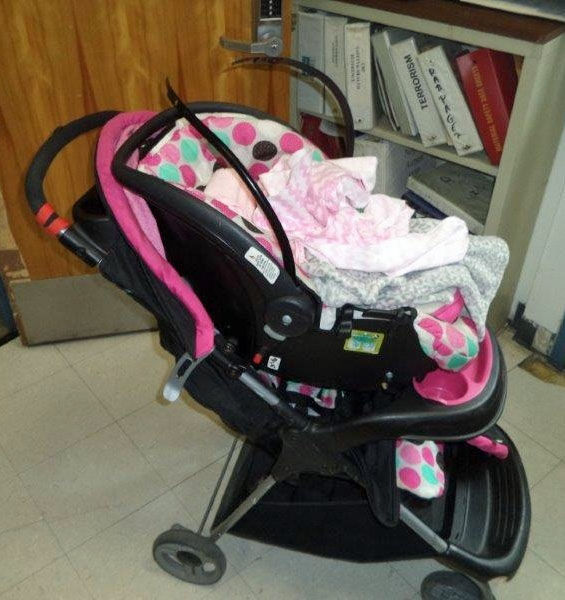 Customs officers in Nogales seized 5 pounds of the synthetic opioid fentanyl that was hidden inside in a stroller in April. 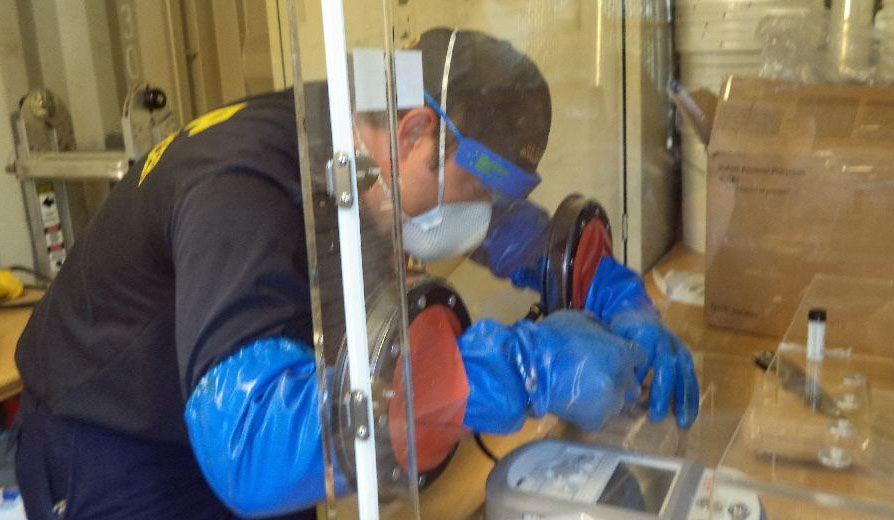 A customs officer wears protective gear while examining 5 pounds of fentanyl seized at the Nogales port of entry.

By Jessica Suriano For the Arizona Daily Star

Smuggled in car seats, beneath clothing and in hidden car compartments, the amount of fentanyl seized this year at Arizona’s ports of entry on the Mexico border skyrocketed 600 percent over last year.

A few salt-grain size pieces of the synthetic opioid are fatal, and nearly 140 pounds were seized this year at Arizona’s ports, enough deadly doses for almost 32 million adults, and enough to make traffickers up to $1.3 billion.

Arizona and California ports of entry have become the doorstep to the U.S. for the global black market of one of the most dangerous drugs of the opioid crisis. Fentanyl is 50 to 100 times more potent than morphine and highly addictive, according to the Centers for Disease Control and Prevention. Ingredients are shipped from China, synthesized in labs in Mexico and Canada and smuggled into the United States.

Teresa Small, spokeswoman for CBP, said the majority of fentanyl seizures at Arizona ports happen at the Nogales port, but CBP cannot explain why, since “drug trafficking organizations control the specific supply.”

About 950 pounds of fentanyl were seized nationwide by CBP from October 2016 to the end of August 2017, more than double the 440 pounds seized in fiscal 2016. While about 60 percent of the total for the first 11 months of FY17 was seized at ports on the Mexico border, the other 40 percent, 400 pounds, were found at seaports, airports inside the U.S. and along the Canadian border.

More than half, 550 pounds, of the total fentanyl was seized at the San Diego and Tucson Field Offices on the Mexico border from October 2016 through July 2017. At the El Paso Field Office, about four pounds of fentanyl were seized in those 10 months and no fentanyl seizures were reported at the Laredo Field Office.

Fentanyl is powerful enough that even accidently touching or accidently inhaling some of the powder can be dangerous, according to the DEA. Fentanyl overdose can result in cold and clammy skin, the bluing of hands and feet, a coma, failure to breathe and death.

The number of people who died from overdoses of fentanyl and fentanyl variations in the U.S. doubled from last January to this January, from 9,945 to 20,145, according to provisional data from the Centers for Disease Control and Prevention.

China is the primary source for fentanyl ingredients for the United States, Canada and Mexico, according to the DEA. A couple of pounds of these ingredients shipped from China cost a few thousand dollars, but traffickers can sell the same batch for millions in profit after manufacturing the drug.

Fentanyl pills are sold for $10 to $20 per pill depending on the purity and dosage. The DEA estimates that batches of one-milligram pills from about 2 pounds of fentanyl can make traffickers up to $20 million.

Fentanyl trade occurs across the southwest border both to Mexico from the U.S. and vice versa for manufacturing and consumption, according to the DEA. The supply lines for fentanyl are the same as the ones used for heroin, so traffickers traveling to the border can purchase both drugs from the same supplier.

Fentanyl can be sold alone or laced into other drugs, such as heroin, meth, cocaine, marijuana and spice at “mills,” which are usually hotel rooms or homes, according to the DEA. Lacing fentanyl into other drugs amplifies the effects, but buyers are not always told the original drug has been modified. Fentanyl sold alone is manufactured to resemble oxycodone.

A 2016 DEA report said that fentanyl has been mixed into counterfeit prescription pills since 2014, such as the pain medication Norco or the anti-anxiety medication Xanax.

Industrial pill press machines are openly available on the internet. One DEA search found a press priced at $995 capable of making 5,000 pills per hour and molds for oxycodone and Xanax pills for $115 to $130.

How it happens here

The Star reviewed 10 cases of fentanyl smuggling filed in U.S. District Court in Tucson. The cases were filed in fiscal 2017 and include seizures of 110 pounds of fentanyl at Nogales ports of entry, almost 80 percent of the total seized at Arizona ports in fiscal 2017.

In August, a CBP dog and X-ray scan detected almost 50 pounds of fentanyl under the backseat of 43-year-old Jose Cuevas Esparza’s Hyundai Sonata at the Mariposa port in Nogales. He told agents at the border two men in Mexico placed a note on his car a week earlier with $300 attached that read: “Don’t be stupid, drive your car to Nogales.”

Sekisaka told them a man in Mexico threatened him to transport the pills, first with a rifle and by confiscating his car for over a week, and second, by parking the car in front of his mom’s house after hiding the drugs inside. He said he was given 400 pesos and promised $4,000 if he delivered the pills to Phoenix.

Zuilma Garcia Valencia, 25, wrapped 5 pounds of fentanyl in a blanket and hid it in a car seat behind her 10-month-old baby while attempting to cross the border in Nogales in April, according to court documents. She told officers she was promised $2,500 from an individual in Mexico for her help.

The DEA announced in a Nov. 9 news release that the trafficking of all fentanyl derivatives would be prosecuted in the same manner as the trafficking of original fentanyl and other controlled substances. One analog of fentanyl, carfentanil, is about 10,000 times more potent than morphine and mostly used in veterinary medicine to sedate elephants, according to the United Nations Office on Drugs and Crime.

In April, a drug-sniffing dog at the pedestrian port in Nogales detected drugs near a woman’s groin, which prompted authorities to escort the woman to a hospital. Once there, the woman, Cecilia Alvarez Molina, 39, removed over a pound of plastic-wrapped drugs with fentanyl or carfentanil properties from the area. She told officers she was promised $500 to carry the substances.

Illegal fentanyl trade happens in the interior of Tucson, too, and not always through the ports at the border. In August, an undercover agent coordinated a “purchase” of almost 1,200 fentanyl pills from a married couple selling at a hotel parking lot on West Grant Road. Other agents hiding at the scene arrested the wife, Lina Martinez Buelna, 46, once she removed the pills from her purse.

Jessica Suriano is a journalism student at the University of Arizona and an apprentice at the Arizona Daily Star. Contact her at starapprentice@tucson.com.

Patrick Remigio was accused of embezzling funds from the local ICE union.

As assaults on federal agents rise, so do prosecutions

A Border Patrol agent testified Wednesday a border crosser was "trying to kill me."

Agents suspected passengers were carrying drug proceeds, but made no arrests.

Federal and local law enforcement agencies conducted raids on Nov. 3, 2016 as part of an investigation into a drug smuggling ring in the Tucso…

We've collected a few front pages from newspapers.com to give you a look at some Nov. 26 papers in history. With a subscription to newspapers.…

Your UA bucket list: 50 things you have to do before graduation

Welcome to Tucson new Arizona Wildcats! This Sonoran Desert town is hot, quirky, full of culture, food and hidden gems. Here's our list of all…

Photos: A look back at University of Arizona Commencement ceremonies

As students graduate with a combined sense of relief, accomplishment and fear of the future, they take part in commencement exercises that inc…

Gov. Doug Ducey invoked the Islamic State group in a statement at the time calling for stepped-up border security.

More than 240 pounds of marijuana was seized.

Scottsdale legislator at odds with Ducey on tackling opioid abuse

Rep. Jay Lawrence says it's an issue best left to doctors and their patients.

A safety valve in what Arizona voters enacted in 2010 is likely to protect individual medical-marijuana users from AG Jeff Sessions' crackdown.

A federal grand jury indicted a Tucson woman in connection with selling fentanyl to a man who died after ingesting the drug.

SB 1420 would have required the Department of Agriculture to set up a testing scheme for things like pesticide and mold.

Officers confiscated 254 pounds of fentanyl — enough for millions of potentially lethal doses — hidden in a cargo of cucumbers.

Customs officers in Nogales seized more than $4 million worth of heroin, methamphetamine, cocaine, and fentanyl in three separate incidents on…

Customs officers in Nogales seized 5 pounds of the synthetic opioid fentanyl that was hidden inside a stroller in April.

Customs officers in Nogales seized 5 pounds of the synthetic opioid fentanyl that was hidden inside in a stroller in April.

A customs officer wears protective gear while examining 5 pounds of fentanyl seized at the Nogales port of entry.