For active Tucson centenarians, the best things in life are glee
Share this
Carmen Duarte

Tucson Medical Center and the Pima Council on Aging are gearing up for a party, celebrating those turning or who have already turned 100 years old.

Among this year’s honorees is a military veteran who bowls regularly and a former restaurant owner whose home is often filled with friends and music.

The party is Friday, May 3, at TMC, where the 32nd annual Salute to Centenarians — “Engage at Every Age” — kicks off. Organizers are expecting 52 centenarians at the bash, where they will be honored at a luncheon by community leaders. The event is not open to the public.

Those in attendance will catch a glimpse into the lives of the admired guests who were born in 1919 or earlier. While short biographies are read and photographs of their younger lives flash on a screen, it will honor centenarians who lived through wars and the Great Depression, danced swing to jazz tunes and watched Apollo 11 land on the moon when they were in their 50s.

Here are two of the centenarians being recognized:

A house filled with music

Trinidad C. Quiroz’s midtown home fills nearly every day with friends who join the 101-year-old in singing songs in Spanish. A favorite is “Buenos Días Paloma Blanca,” which is a ballad to the Blessed Mother.

The women in their 70s and 80s all know each other from daily Mass at St. Ambrose Catholic Church. The friends gather at Quiroz’s home for desserts and coffee, and some play poker and dice.

“I like her personality,” said Yolanda Moreno, a neighbor who began visiting Quiroz about 15 years ago. “She can’t get me out of her house,” said Moreno with a boisterous laugh.

The women joke and tease each other.

“I feel good, of course,” said Quiroz, who turns 102 in September. “The more who come, the better,” said the former businesswoman who operated two restaurants with her husband, Hector, and reared five children who helped their parents waiting tables, washing dishes and cleaning.

Quiroz, a native of Belen, New Mexico, came from a farming family and both her parents died by the time she was 14. She was the youngest of six children, moving with a brother to Tucson in 1943 in search of a better life. Then Trinidad Castillo went to work as a key-punch operator for an insurance company, later meeting her future husband, Hector Quiroz, on a blind date.

The couple married in 1948, and Hector supported his family as an airplane mechanic at Davis-Monthan Air Force Base and then Hughes Aircraft Co., later becoming a manager for a grocery and meat wholesaler before the couple founded and operated a market on Tucson’s north side.

Quiroz learned to cook Mexican food at a young age from her mother, who used recipes passed down through the generations. Those recipes made the cafe popular and attracted patrons who especially returned for the red and green chile chimichangas. The couple made special trips to Hatch, New Mexico, to buy the chiles.

On weekends, Quiroz baked her famous pies, including apple, cherry, pumpkin, peach and lemon meringue for the restaurant.

In 1969, the couple opened Pima Cafe on North Oracle Road and West Glenn Street, attracting families seven days a week, but the cafe closed after three years when the rent for the building increased, explained son Robert Quiroz. The family operated Hector’s for years and then sold the property in the late 1980s for the road widening on Park Avenue.

But the Quiroz family home was always packed with relatives and friends who savored Trinidad’s foods, including albondigas, or meatball soup. Her meals extended to her nine grandchildren and most of her 12 great-grandchildren.

After her retirement at age 72, Quiroz founded a sewing club and women would gather at her house to make baby quilts, blankets and gowns for the then St. Elizabeth of Hungary Clinic that cared for low-income families.

The club donated the baby items to the clinic for more than a decade. Five sewing machines still remain in a back room of Quiroz’s home. Hector Quiroz, who died in 1995 before he and Trinidad could celebrate 48 years of marriage, supported his wife in all her projects.

At age 95, Quiroz fell crossing the street to go to Mass and her hip broke, leading to a hip replacement that healed without any complications. But she has been using a motorized wheelchair for about a year because her knees are worn.

That does not stop her from going every Sunday to the Sabbar Shrine Temple for bingo, where she handles six cards per game. When she was younger, she played nine cards. The biggest bingo jackpot she has won was $2,500 on a cruise ship.

Among what has led to her long life, said Quiroz: “Lead a clean life — no drinking, no smoking, pray, be happy and drink Dr Pepper.”

Glen Ray Brady, 99, goes bowling every Tuesday, and he now is with the Super Senior Trio, a summer league at Fiesta Lanes on West River and North Oracle roads.

He enjoys schmoozing with fellow bowlers on his team called “Mostly Old” and giving a high-five for a great roll down the lane in pursuit of strikes.

For a strong grip, Brady uses a five-hole ball. Even though he lost his vision in his right eye because of wet macular degeneration and has poor vision in his good eye, Brady bowled a 208 while celebrating his 99th birthday last November.

Brady knows his stuff. He bowled in his first Senior Olympics in 2013 and since then has won eight medals.

“Life is good,” said Brady, while sitting at his dining table in his comfortable apartment in a retirement community on Tucson’s northwest side.

He is thankful for his family, including three children, six grandchildren, eight great-grandchildren and a great-great-granddaughter. Spending time with family and friends makes him happy — along with the Chicago Cubs winning the World Series in 2016 after waiting for 108 years.

Brady has led a full, adventurous life and said he realizes life is always changing. He was born in 1919 in Latham, Illinois, into two generations of carpenters who worked building houses and barns.

He attended a one-room schoolhouse with four of his 11 siblings in nearby Harristown. When the stock market crashed in 1929 — leading to the Great Depression — Brady was a boy who witnessed his family’s world change, along with those in the small communities.

His brothers left for the Civilian Conservation Corps created by President Franklin D. Roosevelt in 1933 that created projects that put thousands of Americans back to work.

Meanwhile, Brady remembers helping his father trap foxes, minks and muskrats and selling their pelts so the family could eat. It was freezing cold on some of the hunts, but one year before Christmas the two trapped a mink that brought $25, allowing food to be put on the table.

The family lived on a small farm outside Decatur, Illinois, and one cow provided milk, chickens laid eggs and the family planted potatoes and vegetables. Brady can still remember his mother’s homemade bread and her canned green beans, peas and sauerkraut.

Brady joined the Army in 1941 and served in World War II as a medic with the 21st General Hospital, the largest troop hospital and most decorated medical unit. It operated in North Africa and Europe, treating 65,000 patients by the war’s end, according to a website.

Brady was in his early 20s and witnessed much trauma in Africa, Italy and Southern France. “We landed on a beach west of Marseille, France. We followed Gen. George Patton. In North Africa, there was Gen. Jimmy Doolittle’s 12th Air Force,” said the veteran who does not enjoy reminiscing about the war.

In Africa at one point, he was in charge of feeding German and Italian prisoners. As he retold the story, he pulled out a silver cigarette case that was wrapped in a cloth. The case, he said, was given to him by a German soldier in exchange for cigarettes, and the case is estimated to be more than 130 years old.

Brady was honorably discharged in 1945 and married Margaret Albin, a registered nurse, in 1946 after meeting her on a blind date in Decatur. He worked days as a butcher and studied accounting at night at a business college, taking advantage of the GI Bill.

He eventually went to work as an IRS officer in Peoria, Illinois, and then in 1960 he was transferred to Flagstaff, where he continued to audit businesses while Margaret worked at a hospital.

Brady also worked in Tucson and returned to Springfield, Illinois, and retired after 30 years with the IRS. He and Margaret, who died in 2010 from Alzheimer’s disease, traveled, spent time with family and took up exploring cemeteries and researching genealogy.

The couple was married for 64 years, and Brady moved to Tucson after his wife’s death to be with family, and volunteered with AARP preparing taxes for those in need. “Life is good,” he reiterated.

Quiroz and Brady are among more than 240 people age 100 and older living in Pima County and over 830 statewide, according to the Pima Council on Aging, a nonprofit that serves and advocates for older adults and their families.

Last year, the council identified 145 centenarians living in the Tucson area. There are an estimated 72,000 centenarians in the nation, says the U.S. Census Bureau. 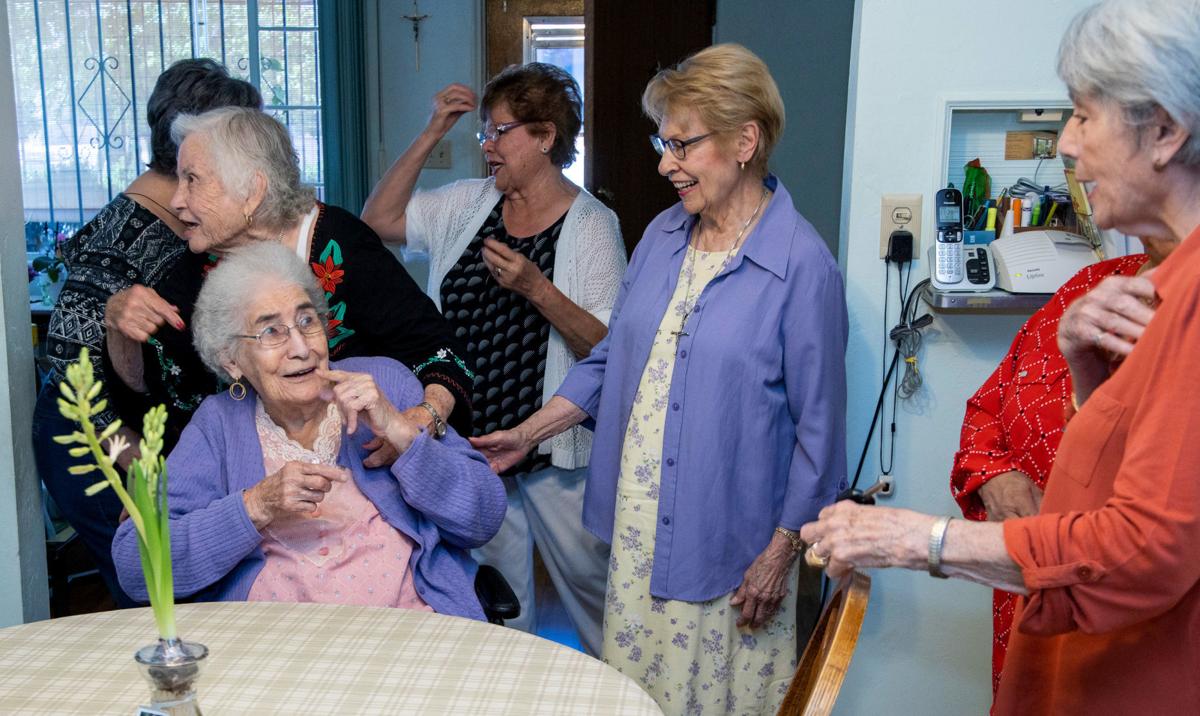 Trinidad Quiroz, seated, has friends over to her midtown home nearly every day. The native of Belen, New Mexico, moved to Tucson in 1943 with her brother. She married five years later and ran Mexican food restaurants with her husband before retiring at age 72. 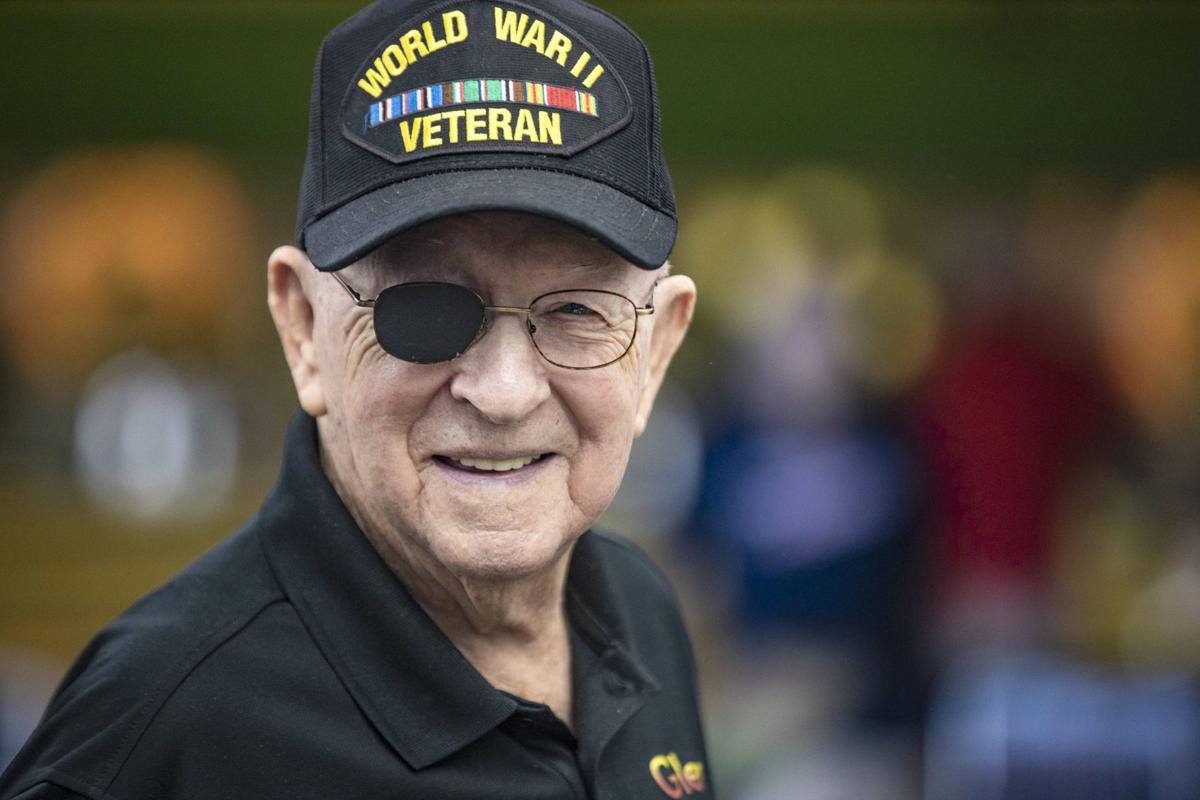 Glen Ray Brady, originally from Illinois, served in World War II as a medic with the 21st General Hospital. In North Africa, he was in charge of feeding German and Italian prisoners. 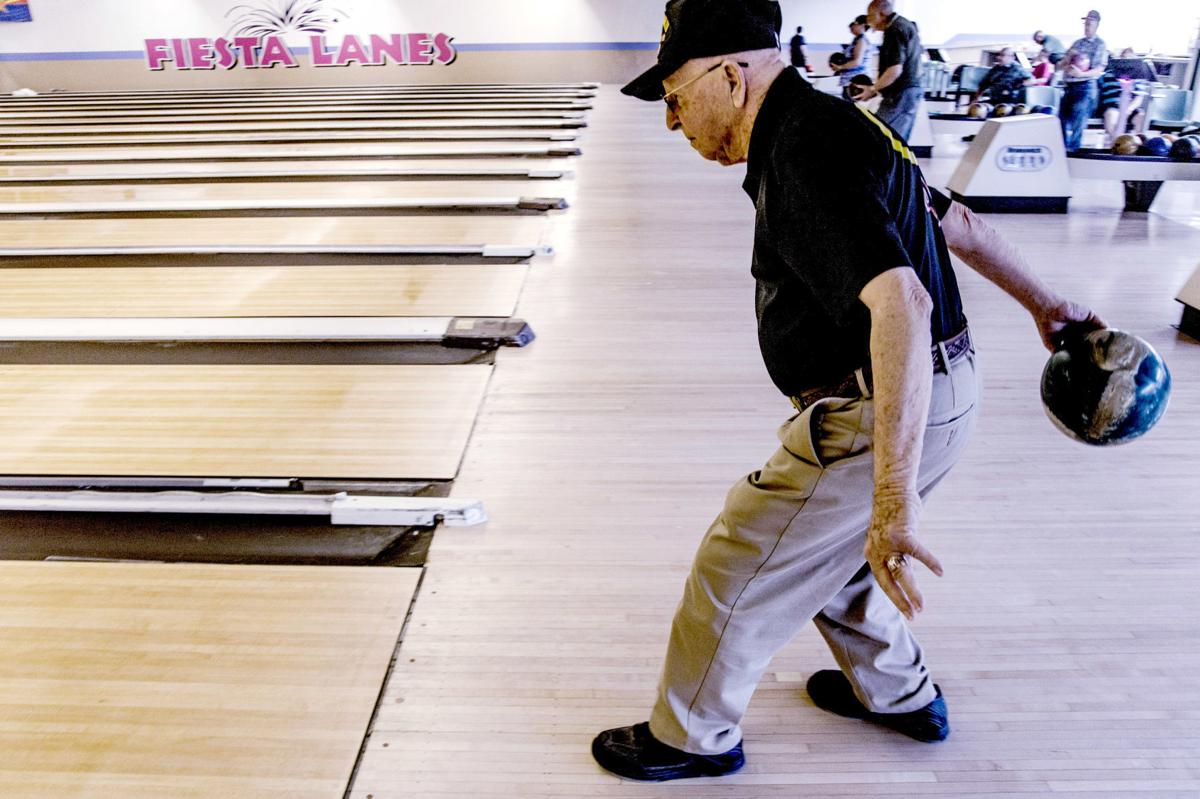 Glen Ray Brady, 99, takes to the lanes in his Super Senior Trio league at Fiesta Lanes. Brady also competes in the Senior Olympics in bowling, with eight medals to his credit. He and 51 other centenarians from the area will be honored at a lunch on Friday, May 3. 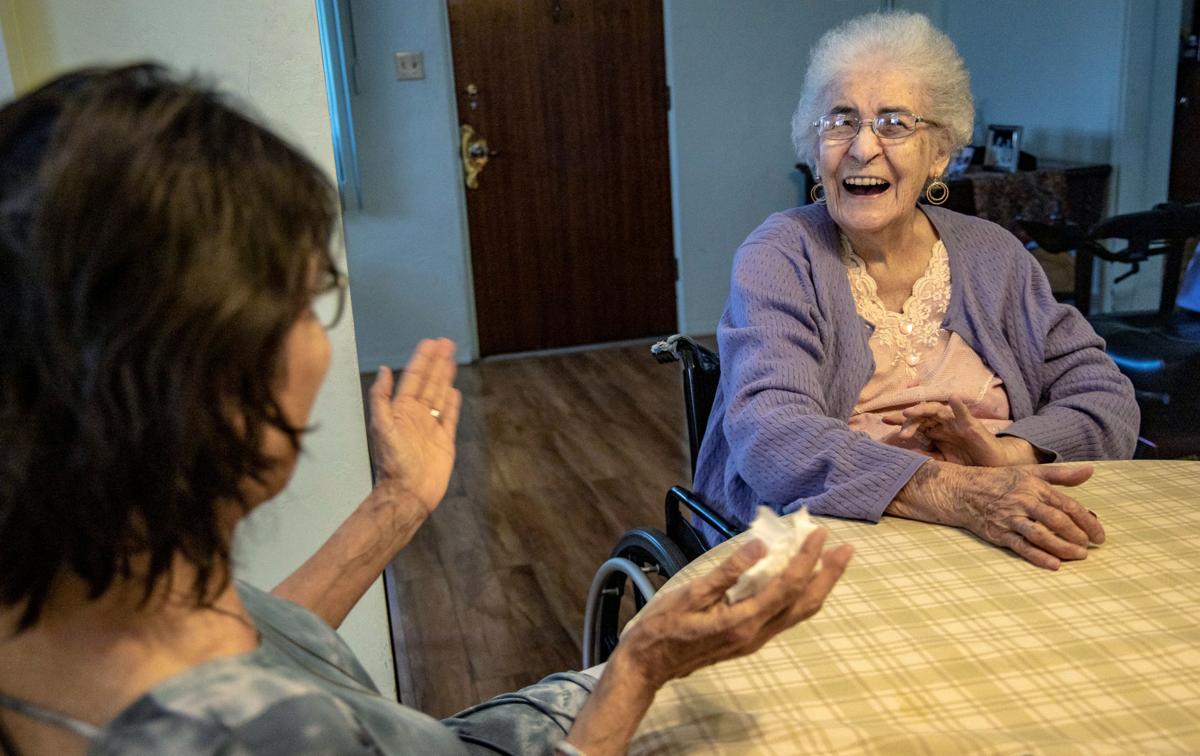 Trinidad C. Quiroz, 101, enjoys a dice game with her daughter, Catherine. Some of Trinidad’s keys to a long life: “no drinking, no smoking, pray, be happy and drink Dr Pepper.” 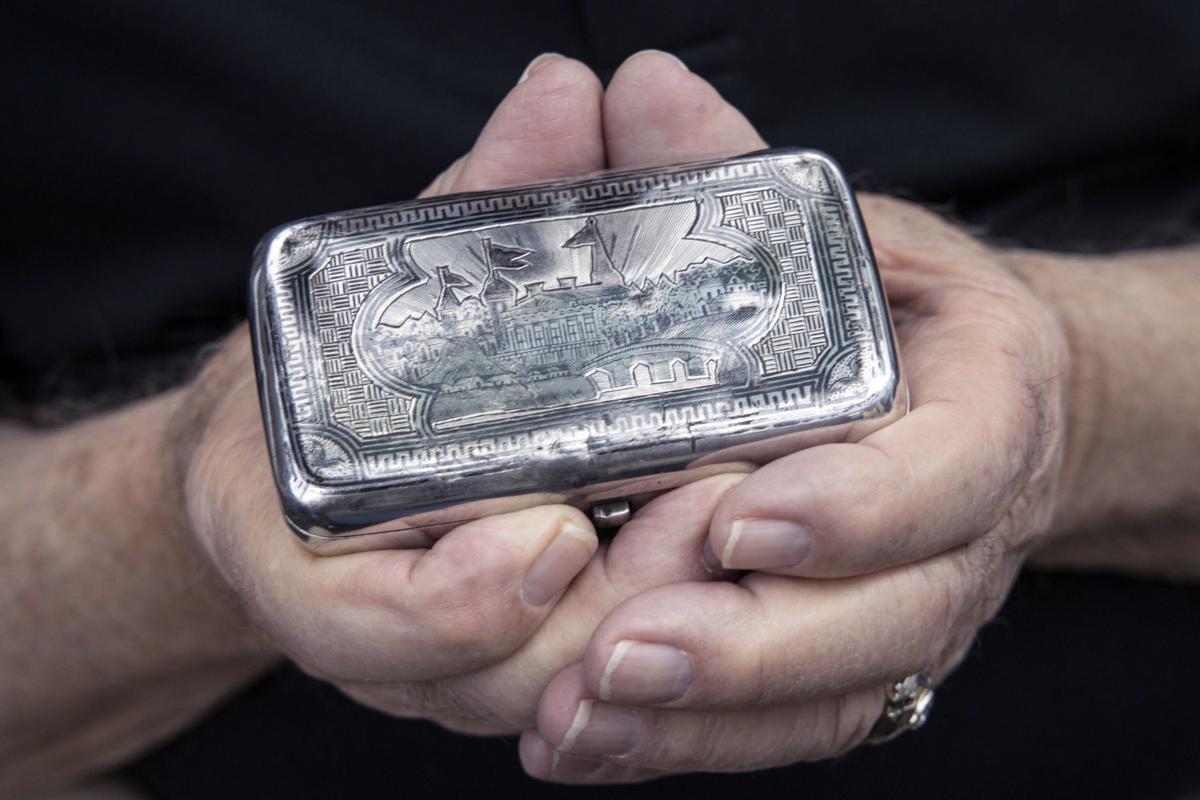 Glen Ray Brady, 99, holds a cigarette case he received from a German prisoner of war in World War II. Brady, a medic, gave the soldier some cigarettes and the soldier gave him this case he had taken from a dead Russian soldier. The case holds the name of the German soldier.