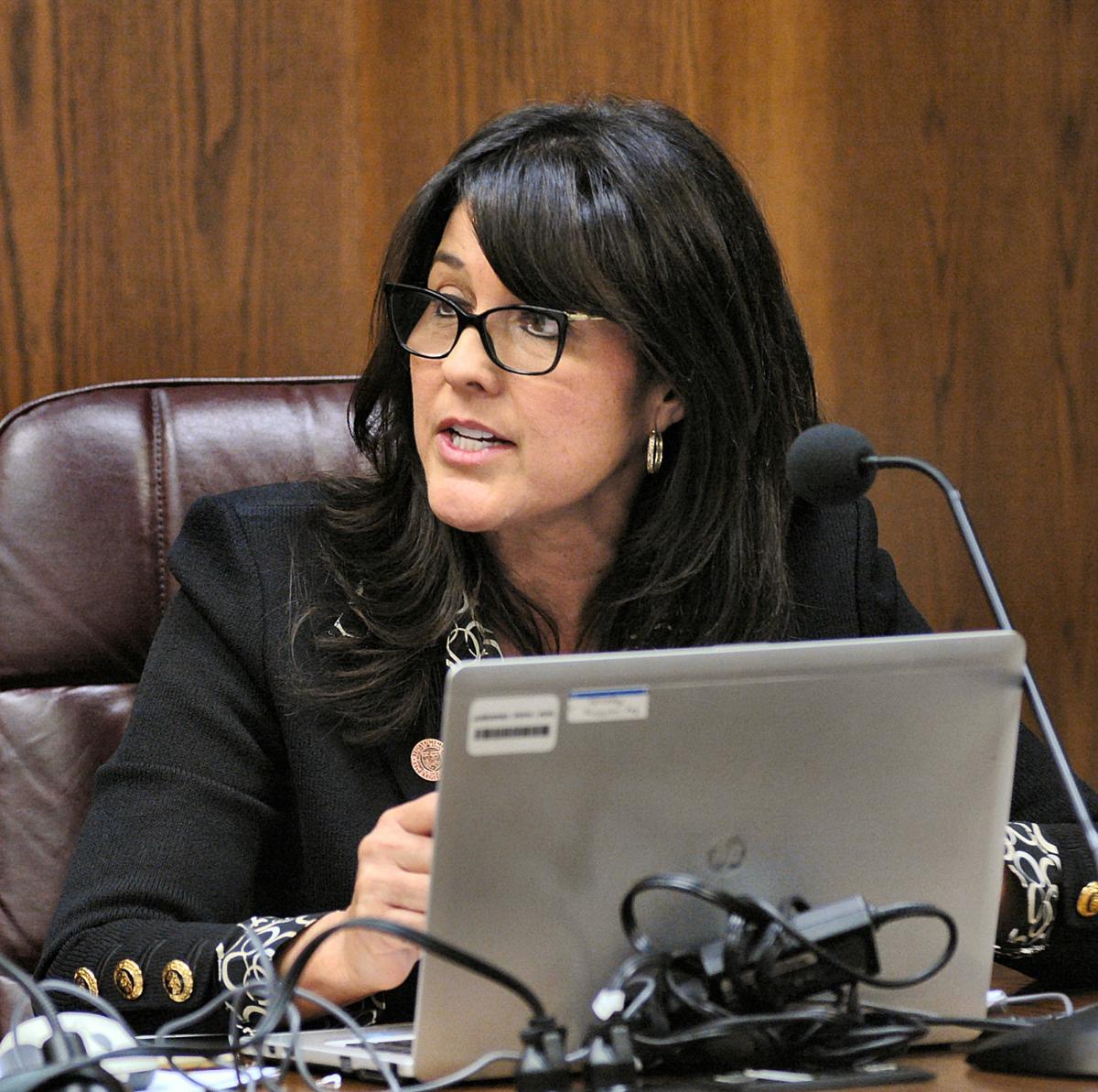 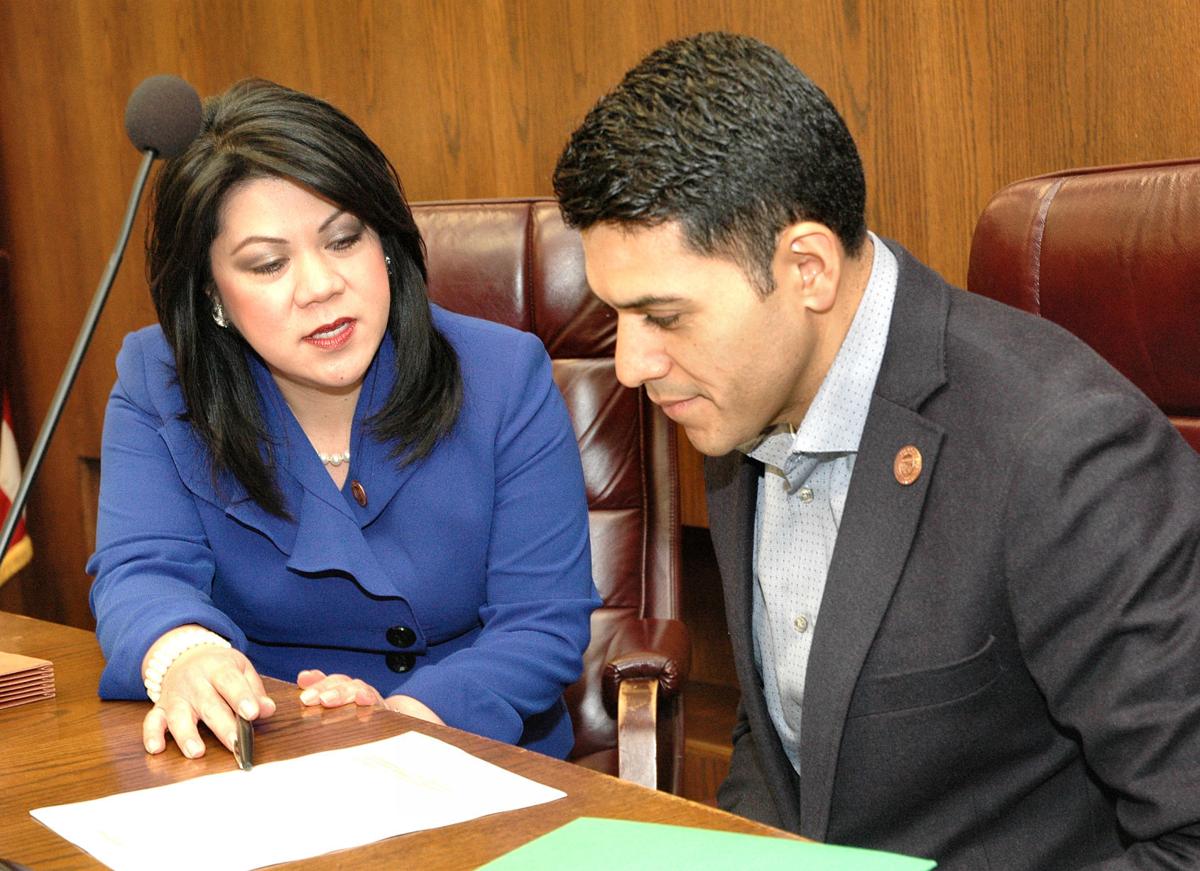 Sen. Kimberly Yee, who chairs the Senate Ethics Committee, goes over some notes with fellow Republican Sen. Steve Montenegro ahead of the panel’s party-line vote to pursue an investigation into whether a Democratic lawmaker broke the law in gathering signatures to block expansion of the voucher program.

PHOENIX — The Senate Ethics Committee voted Thursday to investigate whether a Democratic senator broke the law in how she gathered signatures to thwart expansion of the voucher program that lets parents use public dollars to send their children to private and parochial schools.

In a party-line vote, the Republican-controlled panel concluded there is enough evidence in allegations against Sen. Catherine Miranda of Phoenix that she violated state election laws to warrant a further look. But they agreed to postpone further action against her — including the possibility of recommending she be expelled from the Senate — until the Attorney General’s Office looks into the issue.

The vote came over the objections of Sen. Martin Quezada, D-Phoenix, who said Thursday’s hearing was little more than a “dog and pony show,” with the GOP lawmakers having already made up their minds ahead of time.

Sen. Steve Montenegro, R-Litchfield Park, acknowledged that he had motions to pursue the investigation already prepared before going to the meeting, even before hearing a report from committee staff. But Montenegro sidestepped repeated questions of whether the outcome of Thursday’s vote was predetermined.

Tom Ryan, Miranda’s attorney, said he sees something more sinister behind the investigation, which was triggered by a complaint from a supporter of universal vouchers.

“This is payback,” he said after the hearing, saying Republicans and other supporters of universal vouchers want to punish Miranda for refusing to vote to expand the program. Ryan said if the committee intends to have a hearing, he will present evidence that this is an organized political attack.

“We’re going to be issuing subpoenas ourselves. We’re going to be hiring a private investigator,” he said. “And we’re going to get to the very bottom of what the hell’s going on here because I’m not going to let Senator Miranda be railroaded like this.”

Miranda was not at Thursday’s hearing.

The complaint is based on posts on social media showing Miranda holding up a referendum petition to block the voucher expansion until voters get a chance to have their say in November 2018.

That picture shows there already are several signatures on the sheet. What it also shows is that Miranda had not filled in a box on the petition signifying whether she was collecting them as a volunteer or paid circulator.

What makes that significant is state election law requires the box be checked before any signatures are gathered. Violations are a misdemeanor, punishable by up to six months in jail.

Ryan did not dispute that the box was not filled out. But he said anything his client did was unintentional, and he questioned why the Republicans are pursuing the matter, which ultimately could allow the full Senate to vote to expel her.

“This is using a thermonuclear bomb to wipe out a gnat,” he said.

The complaint comes as the Secretary of State’s Office said foes of expanding the voucher program have gathered more than enough signatures to force a public vote.

At issue is a change in existing law, which now limits taxpayer-provided vouchers to students in special circumstances, like having disabilities or attending schools rated D or F.

The new law, if it takes effect, would eliminate all preconditions, though a political compromise caps the number of vouchers at about 30,000 by 2023.

In the meantime, voucher supporters are going to court in December in a bid to have many of the signatures declared invalid. Their legal complaint involves various alleged violations of election laws, including those like the one of which Miranda is accused.

Ryan said if his client failed to check the box indicating her status as a circulator, that’s a matter for the Secretary of State’s Office to consider when deciding if the signatures should be counted. But he said it’s overkill to use that as a basis to conclude that Miranda violated the law, and in a manner that would allow the Senate to conclude she acted in an unethical fashion.

“There’s no indication that she was trying to defraud anybody,” he said. “She told everybody she was a volunteer.”

“At worst, you’ve got somebody being possibly negligent,” he said.

Foes of universal vouchers have more than enough signatures to give voters the last word — if the petition drive is not invalidated by judges or legislators.

New law requires judges to void initiatives not in "strict compliance'' with all election laws.

Governor pushes back, reaffirms commitment to education and teachers.

That cap on school vouchers? 'We will get it lifted,' influential lobbyist says

Letter from Goldwater Institute CEO angers the Arizona lawmaker who brokered the compromise allowing a big expansion of school vouchers.

But the small program will only be available to some.

Foes of universal vouchers told a judge Friday she cannot consider a challenge brought by those who want to keep voters from getting the last word.

Sen. Kimberly Yee, who chairs the Senate Ethics Committee, goes over some notes with fellow Republican Sen. Steve Montenegro ahead of the panel’s party-line vote to pursue an investigation into whether a Democratic lawmaker broke the law in gathering signatures to block expansion of the voucher program.