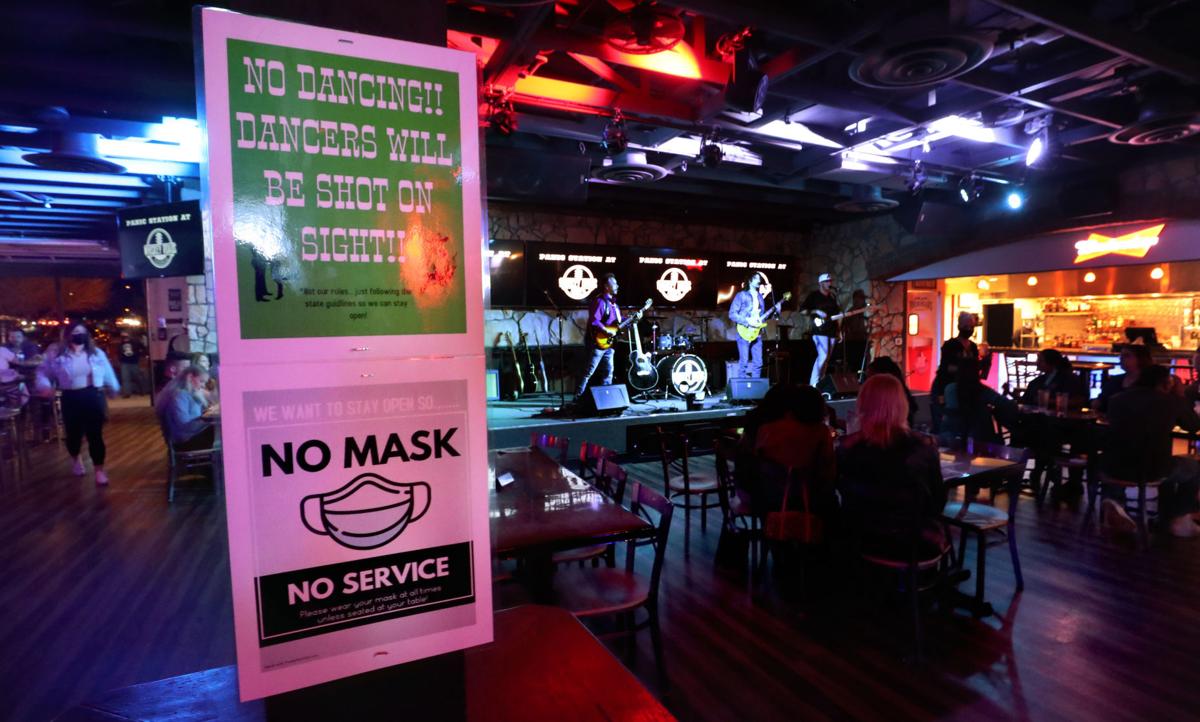 Statewide COVID-19 restrictions, including social distancing and the use of masks in bars and restaurants, have been lifted by Gov. Doug Ducey. 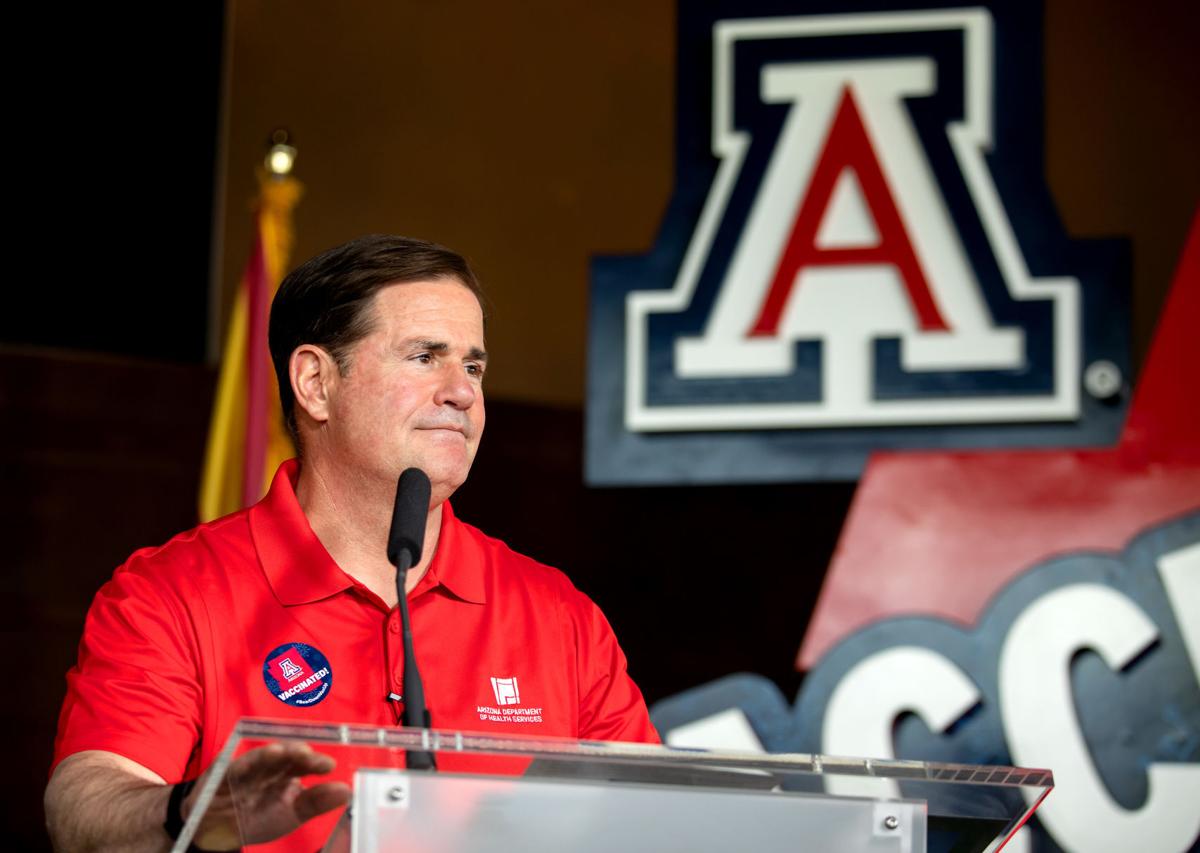 Declaring the pandemic effectively over in Arizona, Gov. Doug Ducey is abolishing all the COVID-19 restrictions that remain on businesses and public gatherings.

PHOENIX — Declaring the COVID-19 pandemic under control and the need for restrictions over in Arizona, Gov. Doug Ducey is abolishing all the limits that still remain on businesses and public gatherings.

And he is eliminating — and once again nullifying — the ability of Tucson, Pima County and other local communities in the state to maintain their own mask mandates.

Tucson Mayor Regina Romero, however, said the city will not comply, essentially telling Ducey that he will have to go to court to void Tucson’s mask ordinance.

In a new executive order Thursday, Ducey dissolved all the limits he had previously imposed on how businesses need to operate. That eliminates any remaining requirements to limit the number of customers to ensure social distancing and to require that staff and patrons wear masks.

Instead, everything that used to be a mandate is now simply a “recommendation.” That means business can — but are not required — to have their own mask mandates and to refuse service to anyone who does not comply.

That also means that all the music venues and bars that have been shuttered are free to open their doors again. And here, too, while there is a suggestion to maintain social distancing and masks, that is no longer a requirement.

Not “going to switch on the lights”

Volpe said the Rialto’s upcoming Gallery Project, an exhibit of the concert photos taken by its house photographers C. Elliott and Mark A. Martinez since the early 2000s, will be a test for how comfortable people are in returning to the theater at 318 E. Congress St. The exhibit officially opens April 2, but the soft opening this weekend is nearly full, he said.

“We’re going to get a good idea how comfortable people are,” he said.

The Rialto at this point anticipates reopening in late summer or early fall once it has received funding from the federal Shuttered Venue Operators.

Similarly, Si Charro President Ray Flores said he will take his lead from his customers and staff when it comes to increasing capacity at his family’s eight restaurants including the flagship El Charro Café at 311 N. Court Ave. downtown and the newest restaurant, Barrio Charro at 3699 N. Campbell Ave.

“I think what we are going to do is base it on the level of comfort for our guests and our own crew members,” said Flores, who has worked with city and county officials throughout the pandemic on behalf of Tucson restaurants. “It’s unlikely that we will go to 100% capacity and overwhelm our dining rooms.”

Flores, who has installed filtration systems in his restaurants and has expanded outdoor patio dining, said he is taking his cues from county and city health officials.

“But we appreciate the governor looking out for businesses and hope we can move forward,” he said.

In issuing the new order, Ducey acknowledged that there have been nearly 940,000 cases of COVID-19 in the state, including 16,874 deaths. But he also cited the fact that the number of new cases has been declining for 10 weeks and hospitalizations are at their lowest level since the end of September.

At the same time, he said, more than 1.9 million Arizonans have received at least one dose of the vaccine, with almost 1.2 million who are now fully inoculated. And he said the Centers for Disease Control ranks Arizona as among the best states in getting the vaccine to those who are most vulnerable.

All that, he said, leads to Thursday’s order.

“The measures put in place last summer allowed Arizona to fight back COVID-19,” the governor said in a prepared statement. “Today, we are in a different spot, and we also are a lot smarter.”

None of this affects schools, which have been reopening with requirements for teachers and students to wear masks. A spokesman for the Department of Health Services said those orders remain in effect.

“Masking is one of the top mitigation strategies for safe in-person learning as recommended by the Centers for Disease Control and Prevention,” she said in a prepared statement. But Hoffman was clearly less impressed than Ducey with the number of Arizonans who already have been inoculated.

“With only 1 in 4 Arizonans vaccinated, I encourage everyone to continue wearing a mask when in public spaces,” she said.

“Spiking the ball on the 5-yard line”

The decision to override local control received the predictable angry response from the mayors of the state’s two largest cities.

Phoenix Mayor Kate Gallego said Ducey ignores the fact that the surge in June was curbed only when the governor relaxed his own opposition to masks and agreed to let communities impose their own mandates, many of which did.

“To abandon precautions now is like spiking the ball on the 5-yard line,” she said in a prepared statement, pointing out the new variants of the virus.

“The risk of another surge is real,” Gallego continued. “The governor clearly cares a lot less about the people of Arizona than his political future.”

In Tucson, the governor’s move could lead to more than talk.

“Our city attorney has advised me that we have clear local authority to continue implementing our city mask mandate,” Romero said. “I have no intention of removing our local mask-wearing requirement.”

That would force Ducey to file suit to override the Tucson ordinance.

This isn’t the first time litigation has been discussed. In fact, it was only after Romero threatened legal action last year that Ducey relented and agreed to permit local options.

In her statement, Romero, like Hoffman, pointed out that the vast majority of Arizonans remain unvaccinated and that there are “more contagious, lethal variants” that remain.

“It is unfortunate that Gov. Ducey is caving to political pressure from the far right and hopping on the bandwagon of reckless actions of other governors instead of following the science and doing what’s best for Arizonans,” she said.

The new order does not strip cities of all of their rights. They maintain the ability to require the use of masks in public buildings and on public transit.

Ducey’s decision to lift restrictions comes as state lawmakers, many frustrated with the limits the governor imposed on individual activity are moving to exercise their right to terminate the emergency entirely or, at the very least, amend the Arizona Constitution to limit how long future governors can impose emergency declarations without legislative approval.

Those restrictions at one time even included a stay-at-home order, and the closure of all businesses he said were not essential.

Yet while Ducey is lifting all the restrictions, he is not ending the emergency he declared slightly more than a year ago. That gives him the right to reimpose any of the restrictions any time he wants.

What that also does is preserve what he contends is his right to preclude cities, towns and counties from imposing their own more restrictive requirements.

Keeping the emergency order active also ensures continued flow of federal dollars for things like free vaccines and testing. And it keeps in place an order shielding certain medical workers from lawsuits for mistakes made in diagnosing and treating COVID-19 victims.

While businesses will no longer be at risk of being cited or shut down for not enforcing distancing and mask-wearing, Ducey said he is confident people “will continue to practice the fundamentals and act responsibly as we gradually get back to normal.”

In fact, the state health department clearly does not believe it is advisable for people and businesses to go back to life as it was before.

Hours after the governor issued his executive order, the agency put out its own recommendations.

For individuals, the health department still advises that people should wear masks when they go out to restaurants, bars and nightclubs. There also are the usual recommendations to wash hands often, especially after leaving, and, when possible, to use “touchless” payment methods.

The health department also wants — but can no longer require — businesses to provide physical separation between unrelated parties, whether by a barrier like plexiglass or 6-foot distance and to limit large parties to no more than 10.

Salad bars and buffets also are again allowed, though the agency asks that these be limited.

And while dancing is no longer off limits, the agency wants to “encourage” those who get out on the floor to remain at least 6 feet apart.

Pima County officials say there are not yet enough COVID-19 vaccine doses available to open up to all adults here, although state-run sites are open to anyone 16 and older.

Gov. Doug Ducey said he would reconsider approving a federally run vaccine site in Pima County, but would rather have the doses supplying the site given to the state for distribution.

After spending millions on COVID-19 safety measures and technology, TUSD opens classrooms to about 20,000 students across Tucson.

This will help parks users "to secure spring reservations, including over Easter, which is quite popular in our parks."

The first nearly 60,000 vaccine appointments at state run sites — including the University of Arizona in Tucson — are opening Wednesday morning, and are likely to be filled quickly.

In Pima County, 47 new cases of COVID-19 were reported Thursday with 1 death.

The Centers for Disease Control and Prevention's eviction moratorium is set to expire March 31 and there is no indication it will be extended.

In the Kitchen kicks off April 1 with Devon Sanner and dishes he and partner Matt Cable will soon serve at their new restaurant Zio Peppe.

Arizona's top health official: Hospitals now have space, most at-risk people are vaccinated, so pandemic restrictions are gone and it's up to residents to assess their risk and protect selves.

Restaurant operators say the lifting of COVID restrictions comes too soon, so they will continue to require customers and employees to wear masks.

Some in outlying communities face challenges in getting vaccinated

Pima County health officials said they are working with the federally qualified health centers to distribute the vaccine to rural communities.

When Arizona announced Monday that everyone 16 and older could now get a COVID vaccine appointment, many were distraught that their 1C category had been skipped and they would now have to vy with all comers.

State lawmakers are moving to make it harder for Arizonans harmed during a pandemic to sue those whose negligence caused illness, injury or death.

Citing personal freedom, Republican state senators vote to allow themselves to take off their masks. The House speaker also scraps mask rules. Democrats say it's too soon to be "letting our guard down to this virus."

Gov. Doug Ducey is telling cities and counties to fully open their parks to all comers this Easter weekend or face consequences.

Although Pima County is continuing its mask mandate in defiance of Gov. Doug Ducey's executive order, some local businesses are making masks optional.

Statewide COVID-19 restrictions, including social distancing and the use of masks in bars and restaurants, have been lifted by Gov. Doug Ducey.

Declaring the pandemic effectively over in Arizona, Gov. Doug Ducey is abolishing all the COVID-19 restrictions that remain on businesses and public gatherings.