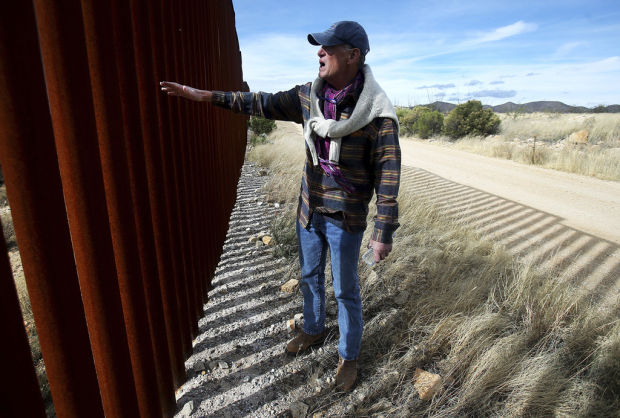 Richard Schultz points to land-clearing work across the border from Rancho de la Osa Guest Ranch, which he co-owns. 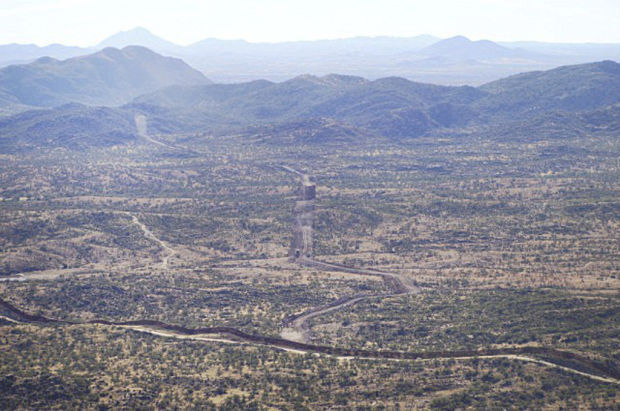 Melissa Owen supplied this shot of land-clearing work already completed on the Mexican side of the border near Sasabe.

Sasabe residents in the Altar Valley are nervously watching as construction crews bulldoze land just across the Mexican border.

They believe, or more accurately fear, the corridor the size of a football field being carved into the Mexican desert is evidence that approval of a proposed 59-mile Kinder-Morgan pipeline through their area is little more than a formality. With a decision from the Federal Energy Regulatory Commission on the actual route of the pipeline not expected until next year, Altar Valley residents are left to wonder how the 36-inch natural-gas-pipeline extension expected to cut through a path through their ranches and sensitive wildlife corridors will affect their lives.

The sound of heavy equipment clearing desert can easily be heard from the historic guest ranch that Richard Schultz﻿ runs a few hundred feet from the international border.

While walking through a thick grove of mesquite trees between the 90-year-old ranch once frequented by Hollywood stars and Washington, D.C., politicians, Schultz says he can only guess as to where Kinder Morgan wants to put the pipeline in relation to his ranch.

He points to some small hills just west of his guest ranch, noting his sole communication with Kinder Morgan has been a single postcard notifying him of a public hearing.

Schultz worries that a massive, denuded section of land near his ranch will hurt his business, which has for decades attracted people from around the world looking for a true taste of the Old West.

Sarah King﻿ can trace her husband’s ranching roots in the Altar Valley back to 1895.

Her worries focus on smugglers who might use the north-south path of the pipeline to bring drugs into the county.

History, she says, has taught her that criminals use the path of least resistance, cutting a fence even if there is a gate 20 feet away. A cut fence might not seem like a big deal, she said, but it impacts her bottom line every time a cow escapes.

Kinder Morgan, she said, has told her that it won’t be responsible if an increase in smuggling leads to problems on her ranch.

King said it is impossible to know how much the pipeline will threaten her family’s century-old ranch.

A small pond fed by seasonal rainwater on one end of the Sierra Vista Ranch has provided Melissa Owen﻿ with countless hours of enjoyment.

Her motion-activated camera has caught bobcats, javelinas, deer and even a jaguar getting a late night drink. She is concerned the earth-moving equipment will destroy the precious watering hole.

“This is an extremely important area for wildlife, not just my ranch, but for all the nearby ranches,” Owen said.

She faults the draft version of the environmental impact statement for not looking at the hydrological impacts the pipeline would have in the area.

History is on her side, pointing to the surveying stake put in the ground a few years ago when El Paso Natural Gas — now known as Kinder Morgan — wanted to build a pipeline to send natural gas from Mexico to Tucson.

Officials offered to route the pipeline around the pond, but the new route would essentially cut off the runoff from nearby hills after the monsoons.

With the eastern edge of her property bordering the Buenos Aires Natural Wildlife Reserve, Owen believes Kinder Morgan is playing politics with the route of the pipeline.

The preferred route was moved out of the boundaries of the wildlife reserve because the pipeline did not meet its goals or mission.

Owen, who said her property isn’t for sale at any price, wonders why Kinder Morgan won’t listen when she says the denuded no man’s land created by the pipeline doesn’t meet the core mission of her ranch.

Richard Schultz points to land-clearing work across the border from Rancho de la Osa Guest Ranch, which he co-owns.

Melissa Owen supplied this shot of land-clearing work already completed on the Mexican side of the border near Sasabe.