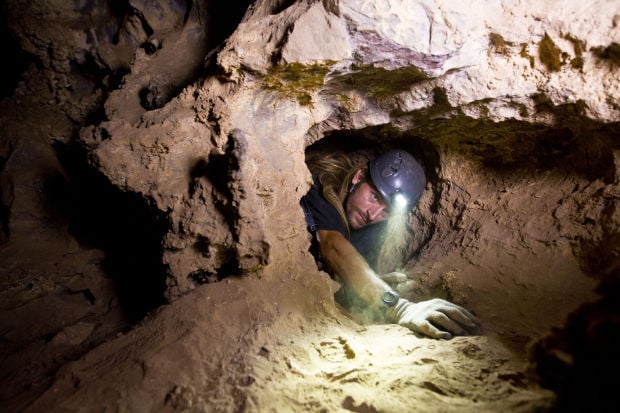 Tour guide Adam Whalen makes it through one of the many tight squeezes during the Colossal Cave Wild Cave Tour last July. Wild Cave tours range from $55-$75 and give participants a true feel of adventure caving. ﻿ 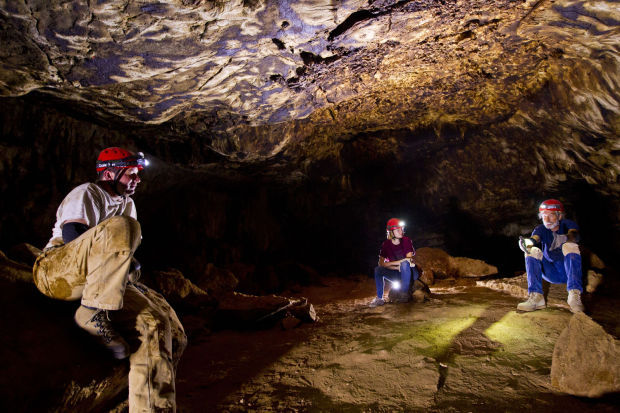 Mike Holmes takes a quick rest in the “Bat Cave” with tour guides Paige Holmes, center, and Bill Savary. ﻿ With attendance having dropped 46 percent since 2000, Colossal Cave Mountain Park in Vail has operated at a deficit for much of the past decade.

Colossal Cave Mountain Park is bound to fail without an infusion of cash from the county and a leadership overhaul, a Pima County audit found.

The Pima County Board of Supervisors requested the audit of the county-owned park in September 2013, and an executive summary was released this week.

The report concluded, “Under current conditions and management practices, CCMP (Colossal Cave Mountain Park) is not sustainable as a business operation or a county attraction.”

“I think the conclusions are accurate,” said Supervisor Ray Carroll, whose district encompasses the park. “I feel it’s at a crossroads.”

The audit’s findings are scheduled to be discussed at a Nov. 18 Board of Supervisors meeting.

“Colossal Cave has been limping along, suffering for a while,” said Mike Holmes, an operations program manager for the county’s office of Economic Development and Tourism.

Without cash infusions from Maierhauser’s personal finances, it’s unlikely the park would be able to continue operating. Maierhauser heads Escabrosa, Inc., the nonprofit managing the park.

“Altogether, we’ve put $2 million into the park,” Maierhauser said. “It isn’t that we haven’t tried.”

The audit recommends the board give the park a cash infusion of $1.56 million to fund the most pressing repairs, such as plumbing, building and road repair.

Even if the county opted to close the park, it would cost money — about $250,000 annually to maintain the grounds and pay for security, Holmes said.

“It’s not a cheap proposition to just mothball it,” Holmes said.

In addition, Colossal Cave Mountain Park is listed in the National Register of Historic Places and is part of a wildlife corridor, Holmes said.

The audit committee believes the park could become profitable if it focused on more adventurous activities such as a zip line, extensive cave tours and a ropes course.

“A lot have been goals we have had for a long time,” Maierhauser said. “It’s just a matter of coming up with money to get them underway.”

Holmes said another way to get the park in shape would be to set aside funding from the 2015 bond election.

Supervisor Carroll said it’s unlikely the bond package will make it past the bond committee without new park operators.

“It’s a very hard sell for me,” Carroll said.

The current management contract expires in August 2015, and the audit committee recommended a national bid process to find the next operator.

The process would be open to for-profit and nonprofit organizations, and the park’s current operators would also be eligible to reapply.

Maierhauser would like to continue her tenure at Colossal Cave Mountain Park.

When asked whether she would reapply to run the park, Maierhauser said: “Absolutely, I’ve been at the park for 52 years.”

She took the reins after her the death of her husband, Joe Maierhauser, in 2007.

While Friday's mock election experienced some technical hiccups, county elections officials said the issues with the new voting technology will be resolved by the primaries.

Republican state senators are crafting legislation to make it a crime for parents to let a minor attend "drag" shows, saying that promotes "sexual perversion."

Watch Now: Tucson neighborhood gets bench made from 616 lbs. of plastic

Tour guide Adam Whalen makes it through one of the many tight squeezes during the Colossal Cave Wild Cave Tour last July. Wild Cave tours range from $55-$75 and give participants a true feel of adventure caving. ﻿

Mike Holmes takes a quick rest in the “Bat Cave” with tour guides Paige Holmes, center, and Bill Savary. ﻿ With attendance having dropped 46 percent since 2000, Colossal Cave Mountain Park in Vail has operated at a deficit for much of the past decade.