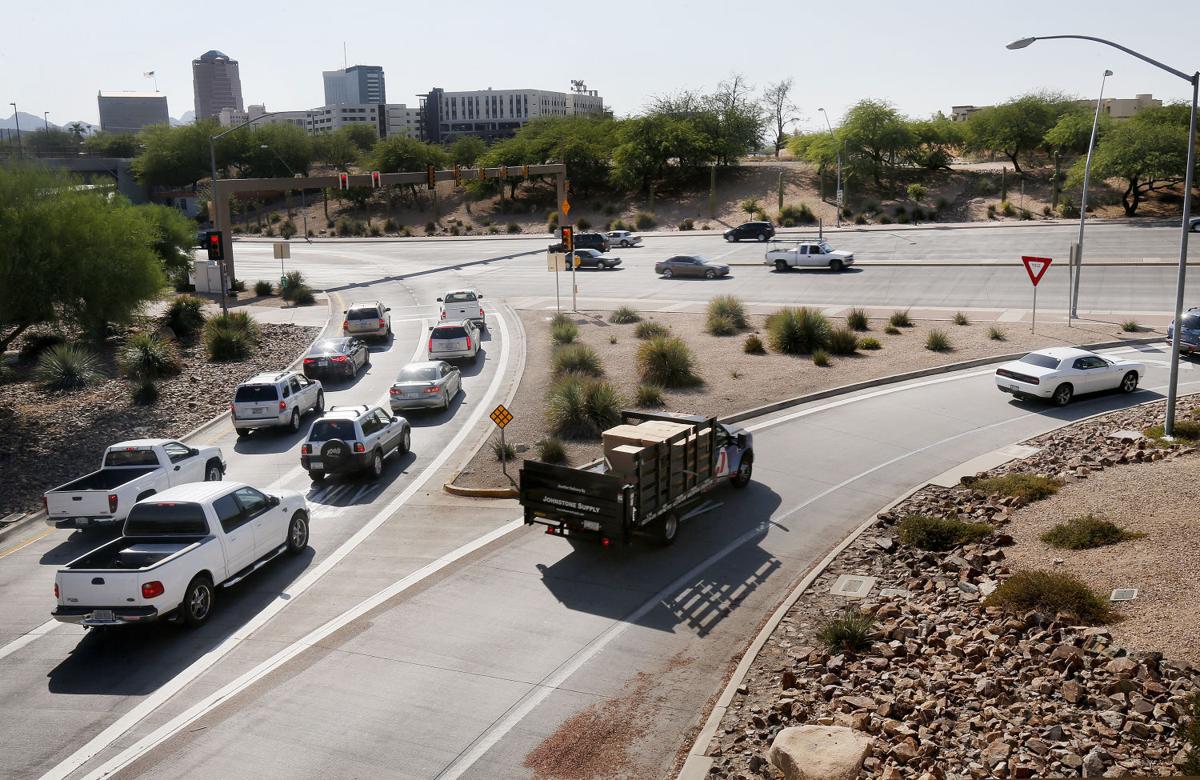 The Barraza-Aviation Parkway ends at Broadway, east of downtown. Plans to extend it have been in the works since the 1980s. 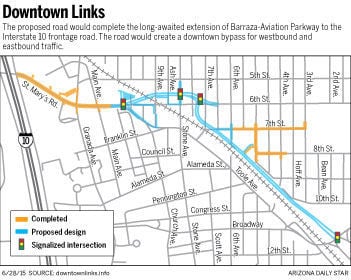 The city has inched closer to breaking ground on a roadway project decades in the works.

Underground and aboveground utility work on Downtown Links — the western extension of Barraza-Aviation Parkway to connect the road to Interstate 10 — could begin as soon as August.

The project, the so-called last mile of the parkway, has been in planning and discussion since the early 1980s. Then, the Arizona Department of Transportation planned to build the Barraza-Aviation, or Arizona 210, to create a roadway that would be the closest the region has to a crosstown freeway with limited intersections and traffic lights.

Downtown Links also would create a downtown bypass for westbound traffic on Broadway. Now, commuters who want to reach the interstate must encounter slow speeds and congestion on Congress Street to reach I-10.

The proposed link wouldn’t create a direct connection to the interstate. It would empty onto St. Mary’s. From there, motorists could catch the I-10 frontage road and drive north past Speedway before merging onto the highway.

Original plans were to connect to on- and off-ramps at St. Mary’s, but that interchange has long since been removed.

Elements of the current plan include two lanes in both directions from Broadway to the I-10 frontage road, with 30 mph speed limits; new intersections with traffic signals at Sixth Street, Eighth Avenue and Church Avenue; bike and multi-use paths; and a deck plaza or elevated park at Ninth Avenue.

The lower speed limits and deck plaza were the result of compromises the city made over the years with neighbors.

The price tag for the Downtown Links project is about $83 million, with $76 million coming from the Regional Transportation Authority. The remaining $7 million is to come from a regional share of the state gas tax.

Talk of creating a downtown bypass where Barraza-Aviation and Broadway meet just east of downtown is nothing new — various versions have been on the books for more than 35 years.

The state spent millions to buy warehouses and other properties between Fourth Avenue and the freeway in anticipation of construction. By about 1989, however, it gave up on the plan after repeated delays and let the city take over.

Since then, the project has undergone at least 20 designs, and various Citizens Advisory Committees the city established have met nearly 100 times.

In an effort to make sure residents have their say and to maintain an open process, the city has caused needless delays to much-needed projects like Downtown Links, Kozachik said.

Funding has also been an issue over the years. When the city took over the project, it lost out on more than $90 million in state funding to complete the final leg.

Kozachik said some of the design needs of the project itself caused delays.

The city still has to complete negotiations with the Union Pacific railroad company to coordinate construction of the planned traffic underpass where the new road intersects with train tracks.

A public desire to preserve historic buildings in the the proposed path of the roadway caused other delays. There’s still a need to acquire some properties, mostly between Seventh and Ninth avenues.

Sam Credio, engineering manager with the Tucson Department of Transportation, said the estimated total costs of property acquisitions would be somewhere near $8  million. That total is pretty close to estimates made in 1993, when the city completed the final — at the time — design concept for the Barraza-Aviation extension.

Further into the future

In the more distant future, it’s possible that Barraza-Aviation would be extended eastward to create a true crosstown parkway.

Jim DeGrood, with the RTA, said the state is conducting long-term planning that includes determining the site of a possible connection of Barraza-Aviation with I-10 near Wilmot Road.

The RTA has nearly $20 million slated for design work and property acquisitions for that section of the project. The costs of construction, or where funding would come from, have not been determined.

The 15 busiest intersections in the Tucson metro region

The Barraza-Aviation Parkway ends at Broadway, east of downtown. Plans to extend it have been in the works since the 1980s.